"He said, 'Son, you go to school and learn your letters, don't be no dusty miner like me.'" 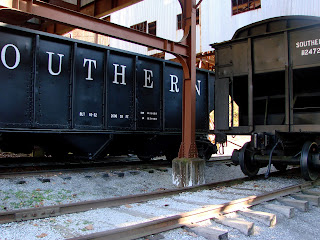 There's a darker side to the beautiful Cumberlands, along with the rest of the mountains in this part of the country. Coal companies. The coal companies had a nasty habit of paying in script which could only be redeemed at the store the company owned. Fires and cave-ins were common and people were often both broke and broken-down. Blue Heron was a mining community run by the Stearns Coal and Lumber Company, starting in 1937. 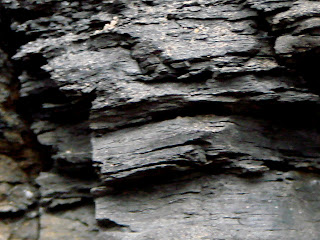 At the base of some of the escarpments is exposed coal. My son, who does some blacksmithing and was intrigued, broke off some pieces to bring home. 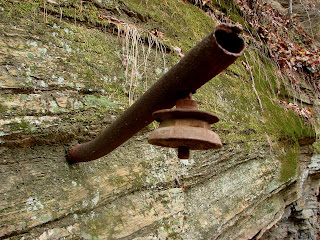 Although the coal companies have long since shut down here, there are still interesting reminders that it was an industrial area for a quarter of a century. 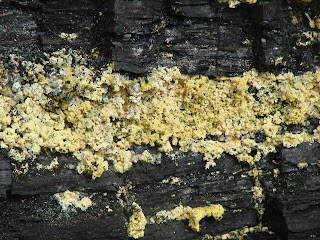 Sulphur? I know coal contains sulphur (which becomes poisonous sulphur dioxide when burned), and that was my son's guess. 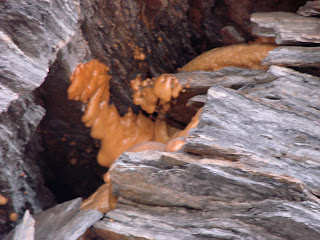 But we had absolutely no idea what this orange goo was oozing from the coal. I've had several patients over the years whose fathers were coal miners, most of them dead now from black lung disease. All of these people grew up in poverty in the coal-rich portions of Kentucky, Tennessee, and Virginia. 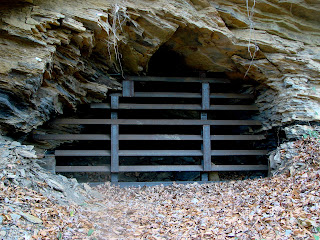 Along the trail there were cave entrances gated off, apparently after some of the rock collapsed. I didn't need that warning - the place looked decidedly treacherous. In 1962, the company shut down Mine 18 and Blue Heron became a ghost town, with only foundations of old buildings remaining. There are re-created shells of the buildings now, with recorded voices of the miners and their families telling their stories. 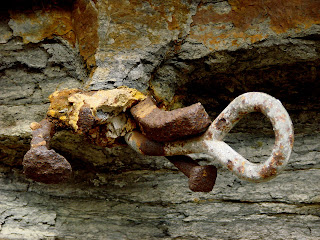 "For I was born and raised at the mouth of the Hazard holler,
coal cars roarin' and rumblin' past my door.
Now they stand in a rusty row all empty
And the L & N don't stop here anymore.

I never thought I'd learn to love the coal dust,
I never thought I'd pray to hear the tipple roar.
But Lord, I wish the grass would change to money
And them greenbacks fill my pockets once more." (Jean Ritchie)
Posted by Secret Agent Woman at 9:43 AM