Not all my projects are impressive ones. 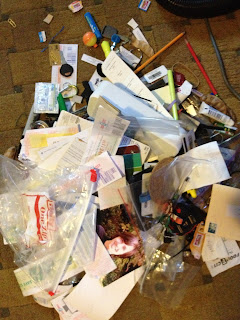 I wrote myself a list of projects for the weekend and realized at some point that I was in danger of not completing a single one before Sunday ended. So I deliberately chose one I knew I could finish just to be able to cross it off my list. It was the kitchen junk drawer. Do you have one of those? Stuff just seems to accumulate and soon it starts spilling out whenever you open the drawer. I started by dumping the whole mess on the rug in the den. 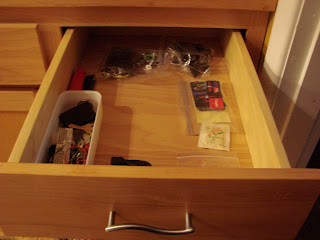 There were the usual outdated coupons and mystery items that could be thrown away. And then: Six cell phone batteries, but I have no idea if we still have those cell phones. A number of keys that don't go to anything that I know of. A microwave light bulb that I never could figure out how to install. Two books of matches from a hotel in Athens, as if I need matches to remember the view of the Acropolis at night. After putting things where they belonged - plastic bags in the drawer that hold plastic wrap and foil, nails and a screwdriver in the tool box, ponytail holders in my dresser, paperclips and pens to the desk, boxtops counted and in a bag for my son to take to school - I was left with this incredibly organized drawer. I showed it off to my older son and he said, "Why'd you do that? It'll just fill back up again." He has yet to learn that much of adult life is an endless Sisyphean cycle of doing chores that will only need to be done all over again.
Posted by Secret Agent Woman at 7:05 AM