Honestly, I have good intentions when it comes to recipes. 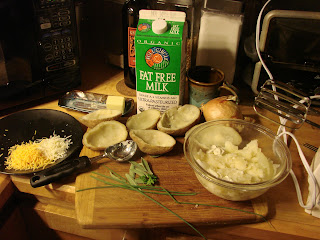 I saw instructions for potato bombs on G-Man's blog, and thought I might make them. Without meat, of course. But I had two problems. The first was that the recipe called for an apple corer and as part of my de-cluttering I've vowed not to bring unnecessary things into my house.  I'm actually kind of a minimalist when it comes to kitchen tools. And the other issue was that I thought I needed a bigger stuffing-to-potato ratio. I decided I'd slice them and cut out part of the potato with a knife and refit them before cooking. Then I decided they'd be easier to cut into if I nuked them first. I hated to let the potato from the ditch I'd carved go to waste so I hollowed them out entirely (with an ice cream scoop), mashed the potato with a little butter, light cream cheese, and milk. Then stirred in parmesan and cheddar cheeses, along with some chopped sauteed sweet onions, diced veggie sausage, and sage, parsley and chives from my garden. And then, what the hell, I topped them with a little more cheddar and some paprika, put a little olive oil and salt on the skins, and baked them. 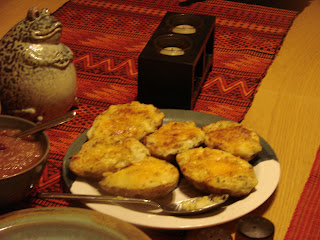 So yeah, potato bombs that bear virtually no resemblance to their inspiration. But boy, were they good.
Posted by Secret Agent Woman at 6:27 PM