If FB had a relationship status for money, mine would be "It's complicated." 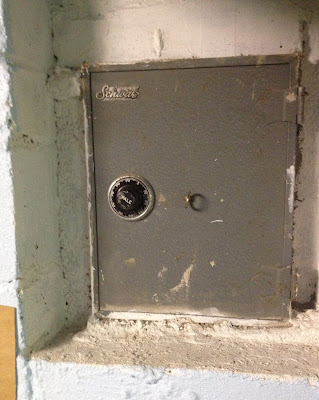 There was probably a time in my life when I didn't worry about money. Probably. I really don't remember. But I do remember how I felt after my parents' divorce. A couple of years earlier, we'd moved to Mississippi and into a nice 4-bedroom house in a subdivision. Clearly we were rich. Okay, I didn't actually think we were rich. But I had my own room! My. Own. Room. Decorated to perfection for a third grade girl with frogs and mushroom lamps and shag carpet and cheerful '70's colors of orange and pink and green. Cut to the divorce when my mother moved us to Georgia to live for a while with her parents. Meanwhile, my father moved his new 24-year-old wife and her children into our house. In one room, my mother and sister shared a bed, and my brother and I slept on little cots. My new baby stepsister got MY room to herself back at the old house.

And for a time, we were poor. My mother went back to college and we found a little rental house. I ducked my head in shame when a substitute teacher asked me loudly why I only paid five cents for my lunch and I had to explain the reduced lunch program in range of the listening ears of my new classmates. My father rarely sent the meager child support checks on time and my mother fumed about it. To us. To say that I was angry about the turn our lives had taken would be an understatement.

I believe that's when it started. I began squirreling money away, terrified that I might need it and not have it. Because I had seen how easily it could happen. The ten-dollar bill in my birthday card from a relative? You might find that rolled up and hidden in the curtain rod. The pockets of my winter coat, in between book pages, in the space behind a dresser drawer - all were good hiding places for money. Coins were counted and purchases very carefully considered. I went door to door offering to rake yards or wash cars for a buck here or there. And you better believe that when I hit 16, I took the $200 I had saved and bought myself a battered '68 Chevelle so I could work at McDonald's.

So here I am at 50, established in my career, and I still fret. I'd mostly laid that aside until my own divorce and holy God did that stir it all back up. But I was determined to do it differently so that my kids would not be burdened with worry. When people criticized me for buying a house and pouring money into fixing it up and furnishing it, I sloughed that off. Yes, I'll take a big financial hit when I try to sell it. But it's been a good home for my boys, they got their own rooms, and I don't regret a single decision I made. 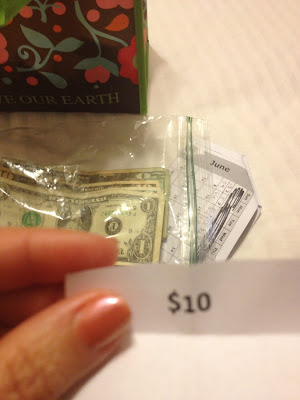 The funny thing is, I'm not even terribly motivated by wealth.  I have deliberately chosen to practice in a way that limits my income because I feel an obligation to help people. I'm fine with that.  And I've never been into status symbols, so I don't need a lot of discretionary income. I drive an old Prius, I don't buy designer clothing (in fact, I'm the Queen of Clearance), I've never gotten a manicure or pedicure, don't get my hair cut professionally, don't wear expensive jewelry, and blah, blah, blah.

However, I do like two things that involve money. First, great food. Thankfully I'm a good cook so mostly I can provide that myself, but I admit I will spend money on eating out. And second, travel. But it is so, so hard for me to carve money out to go somewhere and I am really itching to travel.  So I've resorted to a little shell game with myself. My sister told me about a plan of setting aside a sum of money every week, adding a dollar each time.  $1 the first week, $2 the second, until the last week you add $52.  In the end, you've saved $1378. But that would mean saving only $10 the first four weeks and having to cough up $202 the last four. I suggested it might be more fun to randomize it. And while I was thinking that through, I came up with my own plan.  I divided the year into 2-week periods, reminiscent of how I used to get paid before I was self-employed. Wait... let me take a moment to recall actual regular paychecks...  yeah... that was nice. Aaaanyway. On 364 slips of paper, I printed the numbers 1 through 14 26 times each and folded them up. Every day, I draw one and put that money in a bag. To make sure I don't forget, I have a little calendar to record each day's amount and the total amount. 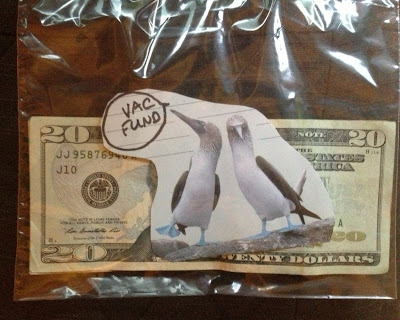 And thus my vacation fund was born. I started it on Memorial Day, drawing a slip with $14 the very first day.  15 days in I have $128 set aside.  When the end of May rolls around next year, I'll have $2730 and I plan to go somewhere fun. Somewhere not in this country.

I know that it's the same money regardless, but somehow it doesn't feel that way. And this is not my only money issue. I can't bear to owe anyone money, so I only go into debt for housing. I have a mortgage, but other than that, I'd rather buy a used car than take on payments, and won't buy anything I can't pay for. I use a credit card the way others use a check book, for the convenience and the frequent flyer miles I'm earning on it. But I keep it paid off because I have a horror of paying interest. And it's not even that I won't spend money. I believe in tipping wait staff well, for instance, and when my cervical cancer ended up costing me $15,000 out of pocket for tests and surgeries, I considered it money well spent. But pay someone to do anything I can reasonably do myself? Nope. That's why you will find me all summer mowing my own yard. 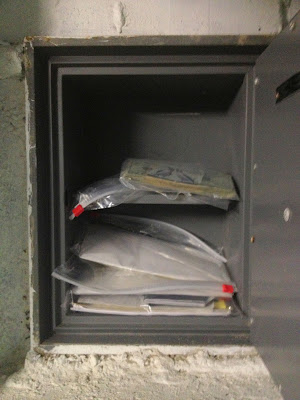 If you look at my to-do list of the last post, you'll see the item, "Obsess about money." Hell, I knew I was going to do it anyway, why not get credit for it? Now that I have on-line banking, I balance my checkbook every few days, check my Visa account, bite my nails over my retirement accounts. I feel bizarrely powerful when I can move money from my checking account into my IRA or make a mortgage payment. Once a quarter, I look at the retirement fund statements, add everything up and then spend a ridiculous amount of time plugging numbers into every on-line retirement  calculator I can find. Some tell me I can stop saving yesterday, others assure me that I will end up in a homeless shelter. This is not an easy state of affairs for someone like me. One of my professors told me that one of the goals of graduate school was to help you learn to tolerate ambiguity. Well you know what? I spent 6 years in grad school and I still think ambiguity fucking bites.

Every time the money in the vacation fund bag on my dresser tops $100, I will pull that out and sock it away in the safe in my basement. In my cold war era house, the original owners built a bomb shelter in the basement with a safe that is permanently cemented in. You heard me. Seems I'm not the only one with a little anxiety about the future. 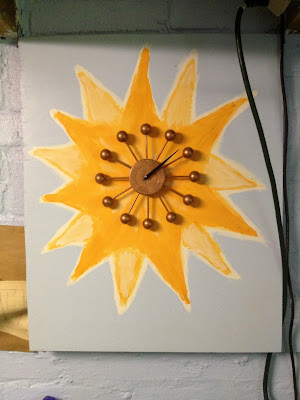 But hey, at least I hide my financial neuroses under a sunny exterior.
Posted by Secret Agent Woman at 9:47 PM