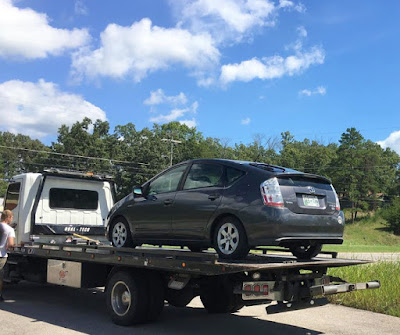 So, I was driving to work on Monday when suddenly a buzzer sounded and several warning lights came on the dashboard. What. The. Hell. I pulled over to the side of the highway and called my husband. Our initial plan was to get me to work, but on thinking it over, I pulled my car ahead a bit to a safer location and we called AAA for a tow truck. And waited. And waited. Three and a half hours and another call later, they sent someone from a different company. A guy named Cory called to say he was on his way and as we waited we both made guesses about what he would look like. My guess was about 28 years old, average build, light brown hair, a beard and mustache, black work boots. My husband's guess was a 40-something heavy set guy, brown boots, and some form of camouflage clothing. When Cory got out of his truck we both laughed - except for his shoes being black sneakers instead of boots, I was dead on. The only part my husband got right was that he had on camo shorts. "Wow," he said, "You totally nailed it!"

While we waited, I'd also started calling and canceling out my patients for the day and we followed Cory back into town to a Toyota dealership. Because no other mechanic we could find would work on the electrical system on the Prius. Many hours later we got the bad news - the hybrid battery needed replacing. Which might not sound like a big deal until they explained that we were looking at nearly $4000. That presented something of a dilemma - my battered little Prius is a 2008 with 154,000 miles on the odometer, so it is not worth even that much. On the other hand, it is definitely not in the budget to get another car. My husband did some research and discovered that this costly repair was likely the only serious one it would need. The Prius doesn't have a regular transmission with multiple gears. Instead it has an electronic continuously variable transmission unit which uses a single planetary differential gear set to combine power from two electric motors and a gasoline engine. I honestly don't have a clue what that means except that a Prius doesn't have transmission problems the way other older cars do. So I gritted my teeth and handed over my credit card.

It's weird when you have some major repair done on a car that doesn't involve body work. It looks exactly the same. And because it failed rather abruptly, it even drives exactly the same. But with any luck, I'll continue to use it for commuting and running errands and hauling a surprising amount of mulch and garden supplies for at least a few more years.
Posted by Secret Agent Woman at 9:01 PM