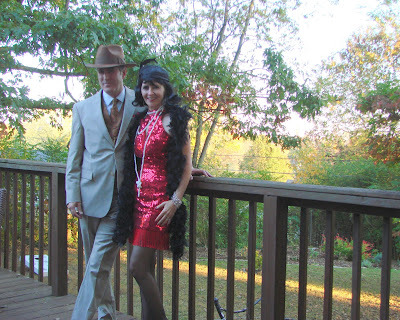 The Saturday before Halloween was one of our kidless Saturdays, so we decided to go to the UU church's costume party. I recycled a thrift store dress I'd used as part of a murder mystery party outfit a decade ago by sewing fringe to the bottom of it. A black boa, bobbed wig with a bejeweled and feathered headband and long pearls, and voilà - instant flapper. My husband did his best Great Gatsby look with a paisley vest and tie and a fedora.  He had a crystal-topped walking stick he'd made, but that didn't find its way into the photo. Instead of heading straight to the party, we went to the speakeasy downtown for a whiskey first because it seemed like the right thing to do. We got smiles and compliments from the bartender and the other patrons. 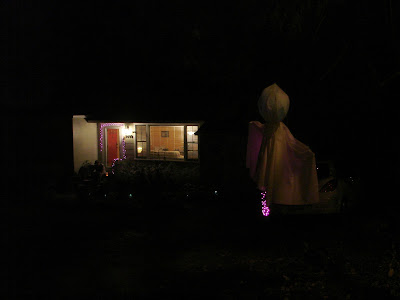 Last Halloween we saw several families stop just short of our house, presumably thinking there was no one home. This year, I hung up a ghost by the street and strung purple lights along the driveway and to the door to lure them in. By the end of the evening, 70 trick-or-treaters had collected candy from us. 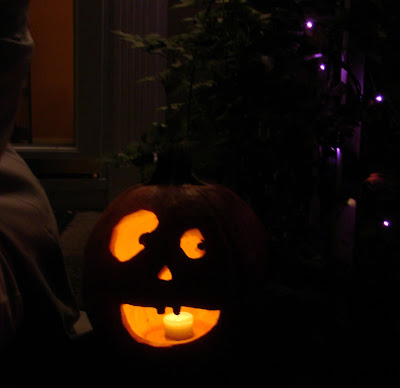 When the stream of costume-clad kids had dwindled down, we grabbed a bottle of wine and the candy bowl and headed next door, where our neighbors were sitting on their porch. We hung out with them, handing out candy to the stragglers and talking about travel. And then about the current election, which lead them to break out a bottle of Irish whiskey. We decided a new tradition had been born.
Posted by Secret Agent Woman at 3:32 PM