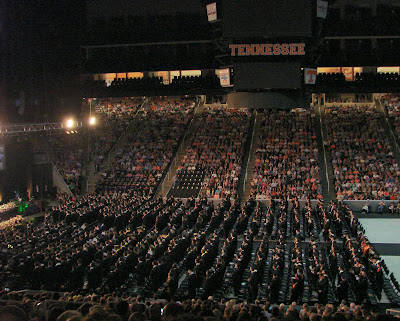 Let's face it - graduations are a little dreadful. Long and boring, with an often mind-numbing speaker. This particular graduation had the added irritant of some rich guy getting an honorary (aka fake) doctorate, which I consider an insult to everyone who has worked their tails off to earn an advanced degree. But I still cry when someone I love is graduating. This time it was my younger son, wrapping up his four years at the University. 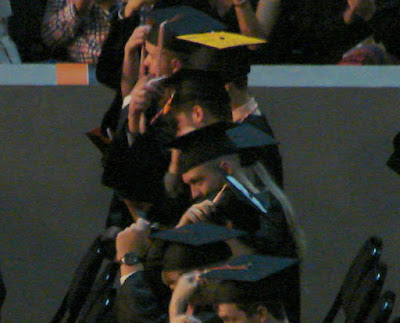 I teared up when they played Pomp and Circumstance and the graduates filed in, and again when they turned the tassels on their caps to show they'd graduated, and yet again when his name was called to cross the stage. Afterwards all of us who were there to watch his graduation drove to the restaurant he'd chosen for a late lunch and a round of margaritas - his fiancée, both sets of his parents, our older son and my sister.  I sat directly across from my ex-husband's wife and we chatted about the possums who've been visiting our yard and about graduation traditions, while next to me I could hear my husband talking with my ex about their shared love of old sports cars. I was hit by the loveliness of having the sort of pleasant blended family that allowed us to all celebrate this son's milestone together, without a hint of awkwardness. I was thankful that my sister had made the seven-hour drive for the occasion. And also thankful that my older son, who is on summer break after his first year of optometry school, put his research project on hold to make the equally long drive to be there. 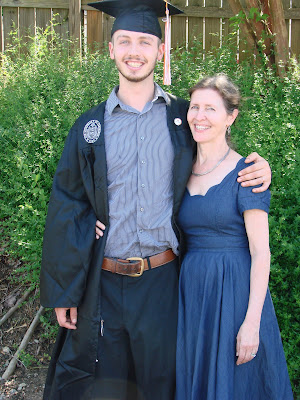 After photos outside, we all parted ways. My sons and their father had to go retrieve my older son's truck which had gotten stuck in the mud the night before. My husband and I had done our bit the night before, when I received a 1 am phone call from the boys asking if we could come pick them up as they'd been unable to get a tow truck to agree to make a middle-of-the-night run to the wildlife management area where they were stranded. It was 2:30 in the morning before we crawled back into bed. In spite of the fact that both my sons are in their 20's, Mom is who they call for help. And I love that. As we pulled out of the restaurant parking lot, I thought about how I'd seen both kids through college and felt a wave of pride, gratitude, and relief.
Posted by Secret Agent Woman at 1:59 PM