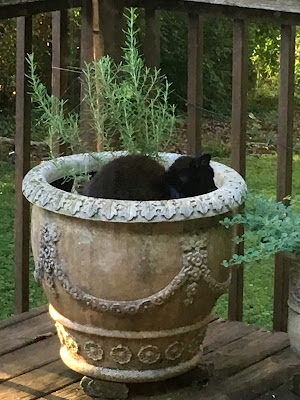 In between surgeries, I have returned to something approaching normalcy. (Note this photo has nothing to do with anything - it's just Hodr being weird.) I went back to work too soon, for a couple of very short days after four weeks. It was a mistake. But the next week I was a little more ready worked four mediumly-full days. The biggest issue was just being able to drive the 45-minute commute. Fifteen minutes of my drive are in heavier traffic and I had to wait until I could extend my arms in front of me. I keep a folded up towel in the car to put between my chest and the seat belt. It's been nice to see my patients again and to hear that I've been missed. I've scheduled myself a break in the middle of each day to nap, which helps. 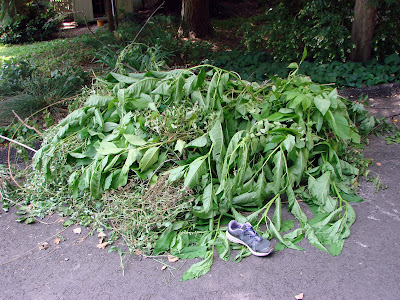 After weeks of staring at the weeds taking over my gardens, I decided to tackle the worst of them last week. For the bigger limbs on shrubs and wisteria vines, I showed my husband where to cut and he wielded the loppers. I pulled up a bunch of weeds, but only things that came up easily from the ground. Other weeds I just cut off at ground level and I will deal with their roots after I'm recovered from my second surgery. I ended up with this pile to be hauled away by the city. And no, I didn't lose my shoe, it's just there for scale. 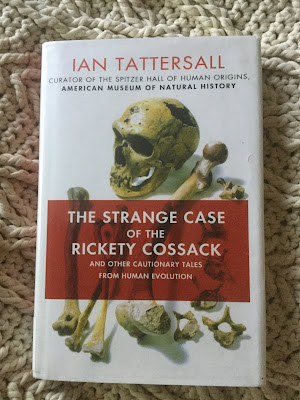 As I've been able to focus a little more, I've moved away from the stash of free books I'd been storing on my ipad and picking up some books that require a bit more brain power. My current read is about how human exceptionalism in the field of paleoanthropology leads to sometimes absurd theories about evolution. Not that I'm not also reading novels, of course. 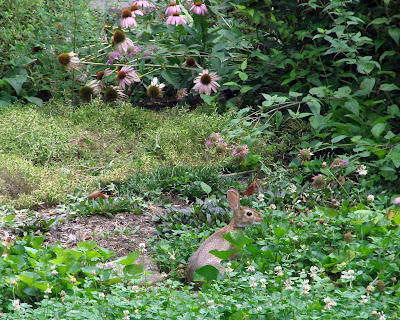 And I have spent a great deal of time just watching the little world of my yard. Out every window, there are birds and small mammals to keep me entertained. We keep the bird feeders filled and set out peanuts for the squirrels and blue jays. And of course, the rabbits love the clover lawn.
So that's where I am these days. Working a little, watching the world go by, and waiting for my next surgery in a couple of weeks.
Posted by Secret Agent Woman at 11:13 AM