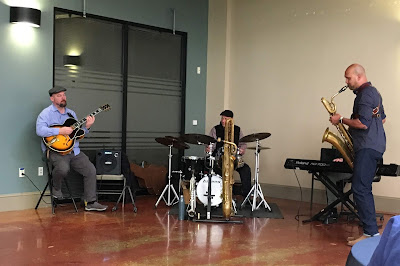 One of the things that most makes me feel like life is gradually returning to normal is getting out to listen to music. Last weekend it was a free event at the Cancer Support Community. Bonus - I wasn't the only one there recently out of chemo. This was jazz by Frog and Toad, and there was also a pretty good brunch spread provided for us. 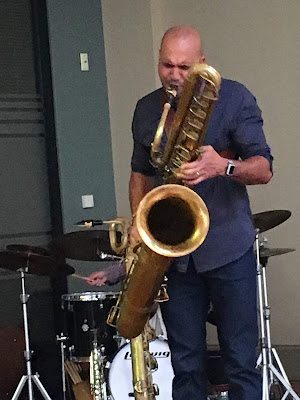 I texted my older son this photo since he'd played saxophone in high school and community band. My son told me they have to close the entire brass instrument factory for a month or more to create a contrabass saxophone because it takes all the workers to build one, and that they cost $30,000 to $100,00 new. This one is a bass sax (third to deepest), from 1914. The saxophonist also played a baritone sax, and a small silver soprano sax from 1924. 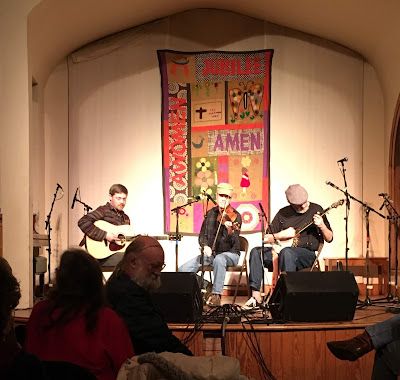 This weekend, we went to the 50th Jubilee Festival at the theater/former church where we got married. Note that the tapestry says both "AMEN" and "AWOMEN." There were seven bands in the line-up, plus warm-up music by a group of harp singers.
The musicians were all from this area, and the focus was on Appalachian music. The Lonetones I've seen at a number of places - we tend to show up at the same hippie crowd events. The man in the group used to do children's shows and I took my boys to see him at this very theater when they were little.
David Lovett and Dale Stansberry and a guitarist who wasn't listed played music that wasn't far off what we heard in pubs in Ireland. They made me want a whiskey. 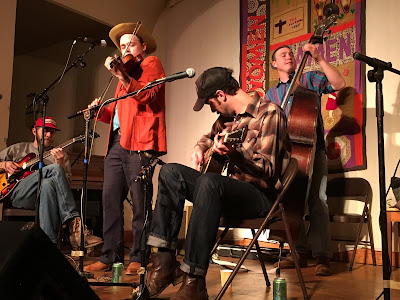 By this point, there were some overeager cloggers immediately behind us, so we moved up to the front row so we could hear better.
John Alvis and friends are basically the house band for the Museum of Appalachia. This is what I have in mind when I think of mountain music.
I sent my older son a photo of this couple and he responded, "Ha ha! They look like that Rucker couple who perform together!" I texted back, "They ARE that Rucker couple who perform together." Turns out they are the parents of his freshman year college roommate. So I went to introduce myself after their set.
We saw the Tennessee Stifflegs (named for the goats also referred to as fainting goats) at a high grav brewery downtown a couple of years ago and really enjoyed them. They call their music style Western Swing. The fiddler/singer is a second generation performer at the Jubilee. 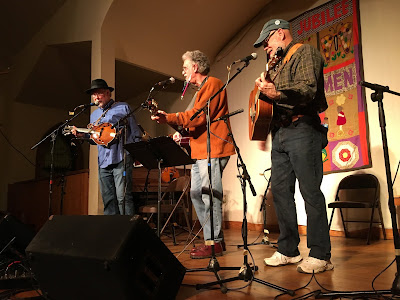 The last group included a mandolin player who has performed at every single one of the 50 Jubilees! We left at 11pm, and although I was tired, I was doing okay. We decided we definitely want to do this sort of thing more often.
Posted by Secret Agent Woman at 12:25 PM