Mamma mia! A glimpse into my family of origin. 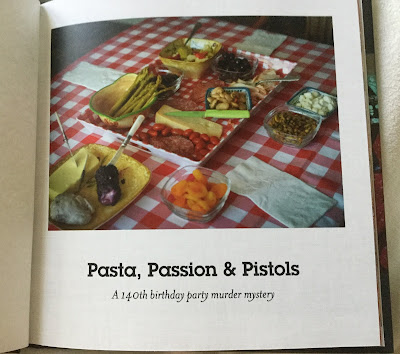 My family is a little nuts. For my mother's 80th birthday (and also my oldest sister's 60th), mom requested that we throw a murder mystery party at her house. If you don't know of these, people are assigned characters and given costume suggestions, then the murder unfolds as scenes are read and clues revealed. This one had to do with a murdered Italian restauranteur, Pepi Roni, so we started with antipasti and also took a break mid-way through for a pasta meal. My brother-in-law makes picture books out of these parties and distributes them to all the participants. 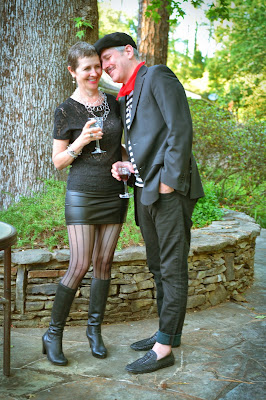 I played Angel Roni, the young daughter with mob ties who dresses in mourning with no sense of propriety. My husband was Bo Jolais, a French vinter who runs the winery for the murdered man's brother Roccoi. Who also happened to be my boyfriend. 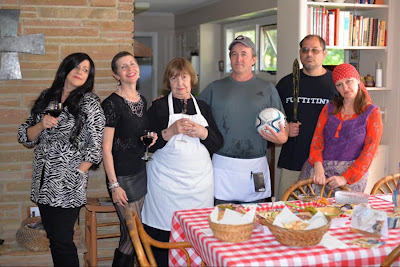 My mother with her five living children, a rare gathering since we're spread across the country. In character, my oldest sister is Tara Misu, the upstairs maid-turned-fiancée of Rocco. Mom played Mama Rosa, the grieving widow and restaurant's head chef. My younger brother was Marco Roni, the soccer-loving son who is resisting taking over the family business. My baby brother was mafia man Tommy Ten Toes, who boasted four toes on one foot, six on the other. And my older sister was Claire Voyant, Rosa's friend and astrology advisor. 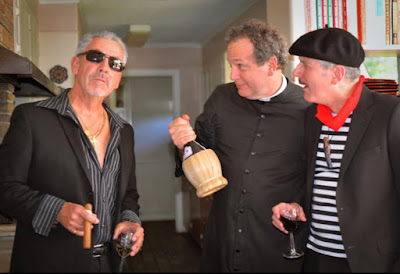 The brothers-in-law: Rocco Scarfuzzi, the identical twin of the victim, Father Al Fredo, priest to the family, and Bo Jalais. Three extroverts who threw themselves into their roles. The funny thing is that most of my sibs (and I) are solidly introverted. But we all set that aside when we're playing a role. 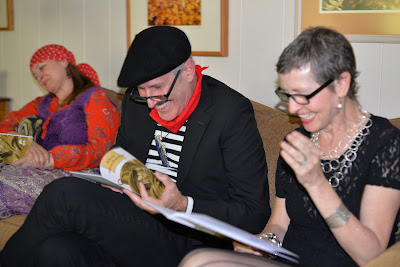 The game is hilarious. Clues get more absurd as the game progresses, with intrigue rampant. Affairs! Mystery illness! Criminal activity! We take on ridiculous accents and throw accusations around with glee. 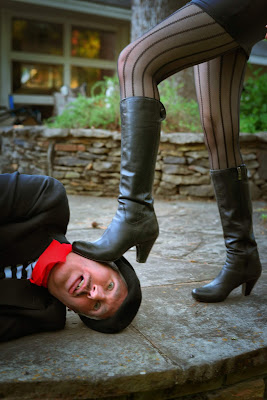 In the end, it turns out that my boyfriend Bo was the character who'd killed my character's father. That's okay, I'd broken up with him after he tried to throw me under the bus because of the extortion ring I was running and I discovered he was only after me for my money. 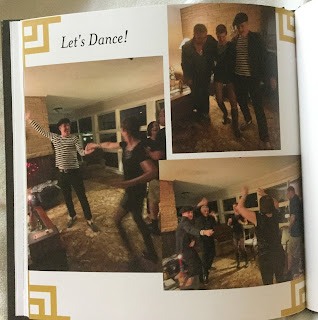 The wine flowed freely, of course, so we wrapped up with a dance party. Two hours of a bunch uninhibited souls cutting loose to 80's music. Silly? Absolutely. But holy cannoli, was it fun.
Posted by Secret Agent Woman at 9:24 AM