So I was working on an update post but got temporarily waylaid. I took off last Wednesday because I'd been advised to not plan anything the day after my second COVID vaccine dose. I had a headache Tuesday evening and Wednesday morning, but then basically felt fine. Likely because I have a slacker-ass immune system.  My husband had taken the day off, too, so we went up to the Ridge and while he was setting poles for fencing, I tended a brush pile that we were burning. It was a gorgeous day and I was working in a short-sleeved t-shirt. Unfortunately, there were poison ivy vines included in the brush. Which, apparently, can get to you through the smoke. Within a day, I had poison ivy rash on my arms, neck and face. Even my eyelid! Most unpleasant. 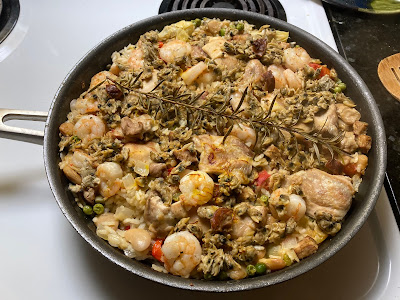 Because of that, I hadn't felt motivated to do much of anything until recently, and in the evenings we've been lying around watching a global cooking competition show called "The Final Table." The Spain episode stirred up a craving for Paella Valenciana, and I made it this weekend. We made ours with chicken, shrimp, clams, and spicy chicken sausage. I also roasted some peppers and tomatoes to add it. It was pretty good. I even got the browned layer on the bottom, called the socorrat, to come out right. My poison ivy is fading a tiny bit, so I will start working on the update post now.