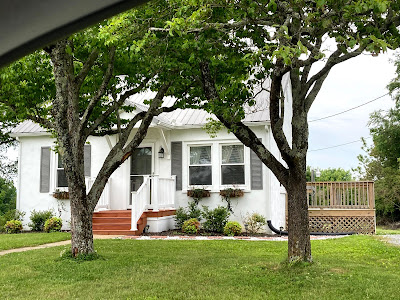 When we decided to put our house on the market so we could build, our realtor warned us that rentals were in short supply and to line that up first. She wasn't kidding. Most places I enquired about wouldn't even respond. Others were such dives we had to pass them up. So when this little house showed up, I did a quick drive by and then my husband met the owners with a check for the first 9 months. It was built in 1940 and is in a quiet neighborhood that's a bit of a drive but not terrible. 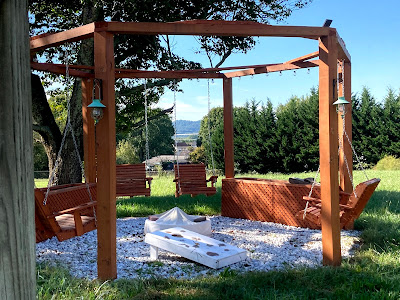 There are mature dogwoods in the front and a cute firepit area out back with swings. (That's our cornhole board, which we have yet to use here.) 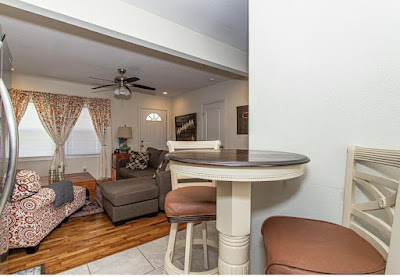 But it's a small house. 700 SF, to be exact. This is a realtor photo, with a wide angle lens that makes it look far more spacious than it is. It was furnished except for the bedrooms. But that cafe table and chairs took up half the small kitchen so we stuck them in the basement for the time being. Along with a television that didn't work. I also took down those dreadful curtains. 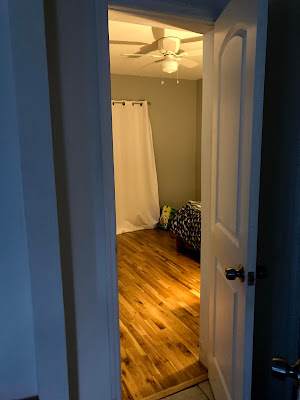 Turns out the old farmhouse didn't originally have an indoor bathroom and one was added later. To do that, they had to make the door to the smaller bedroom less that two feet wide. And that meant that the desk I planned to put in there so I could use it as my office would not fit through the door. So it's in the corner of our bedroom. 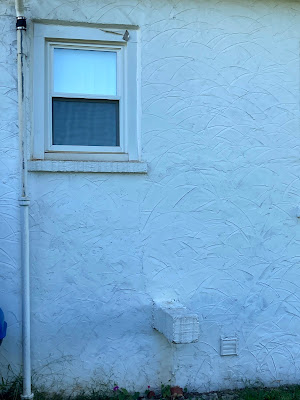 First, I have no idea what that weird protrusion is. But see that window? 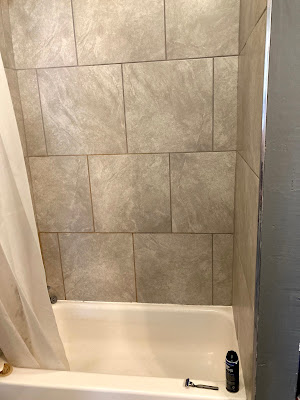 This is what's on the other side of it. They just tiled right on over the window. I call this the midget tub. Just the other side of it is a tiny space for a stackable washer and dryer, which we weren't willing to invest in for such a short period of time. My husband has taken on laundromat duty until the new house is built and our washer and dryer are in storage along with much of our furniture. 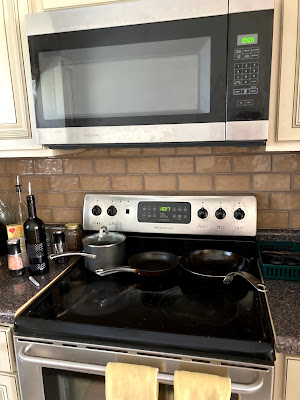 There is another tiled-over window on the other side of this stove. There is virtually no counter space and I've also discovered that I hate over-the-stove microwaves. I don't like lifting hot things down from above my line of vision. The stove didn't work when we moved in and we discovered that not only was it not plugged in, there wasn't even a electric cord attached to it. Whoever remodeled made some hasty decisions. 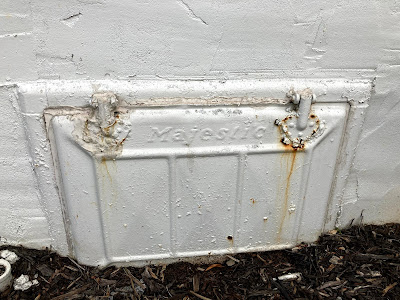 But it's a fine place to stay for now, so I'm not really complaining. I would have loved to have seen it back when it was surrounded by farmland and still using the coal that would have gone down this chute into the basement. Turns out, it used to be owned by the couple across the street, Bud and Joanne. 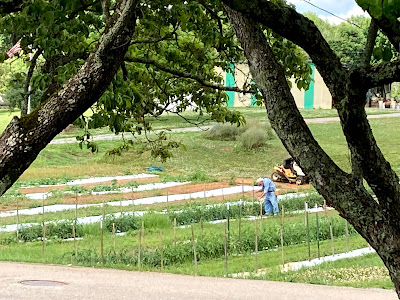 That's Bud, working in his garden. He's out there every day. Joanne seems to spend a lot of time on the riding lawnmower or walking around spraying weeds. They are both 90. I'm in awe.
Posted by Secret Agent Woman at 6:12 AM