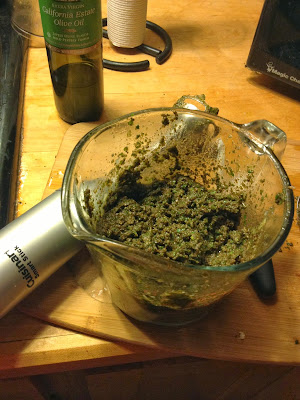 We've mostly been getting great weather, but when we started getting chilly nights a while back, I harvested a bunch of basil and made up some pesto. In part, I wanted to see how useful the immersion blender was. It has replaced both my blender and my food processor, so I was hoping it wouldn't let me down. Fortunately it worked perfectly. I made this pesto with toasted pine nuts and walnuts, slow roasted garlic, olive oil, and fresh shaved parmesan. Delicious. Most of it is in little packets in the freezer.

The basil continued to thrive, though, so when we had a forecasted over-night freeze last month, I had to do an emergency harvest. I googled "how to preserve basil" and then got to work. First I made five logs of herb butters to freeze and use for cooking: basil butter, rosemary-lemon butter, sage-chive butter, parsley-lemon butter and tarragon-lemon butter. Next up, herb salts - you just chop the herbs and mix them with coarse ground salt. My sister had given me a bag of some sort of French sea salt, so I used it. I now have containers of basil salt and rosemary salt. And then, I cut the rest of the basil, parsley and also some oregano and brought it in. I set a big pot of water boiling and started immersing the herbs a bunch at a time into the hot water until they wilted and then into ice water to preserve the color. My apologies to the little green caterpillar who rode in on the basil. Sometimes camouflage is the opposite of protective. After stripping off the blanched leaves, I froze them on sheets of paper towels, so they can be used a little at a time. I also harvested the remaining chives, cut them into pieces, and froze them. 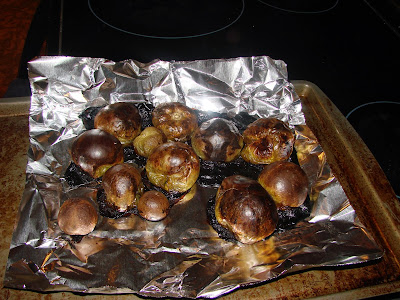 Not all my efforts were productive. I decided to roast the last few tomatoes and then sat down to read. Periodically I'd note the pleasant campfire-like smell in my house and Do. Absolutely. Nothing. La la la, my house smells like it's burning. Until I suddenly remembered and ran into my kitchen.  I'm a fair cook but I am also a bit scatterbrained.
Posted by Secret Agent Woman at 12:37 PM