If you google "1980's fans" you will find all the fans that were in my new house. Which makes sense since the previous owner bought the house in the '80's. This one was in my room - that gold-colored stenciling was a popular feature of that era.

The bedrooms had these blades with wicker insets. I remember we had chairs with seats made out of this stuff when I was a kid. There was always a little piece of it that had gotten torn and would stick into your leg. 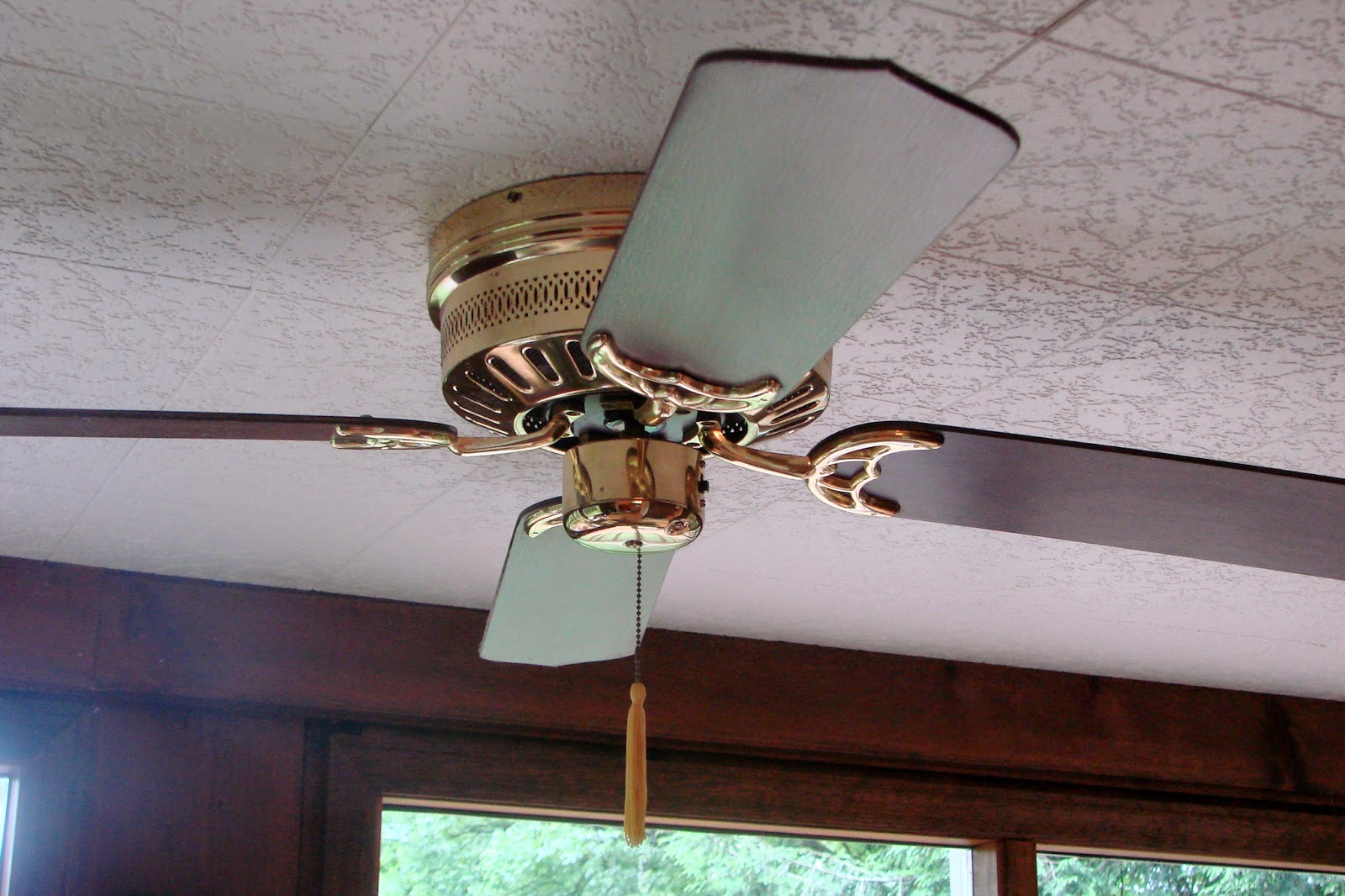 Every single fan had a shiny brass base. Including the one on the sunroom, which had no light kit at all.  All serviceable, I'll admit, and not one to my liking. 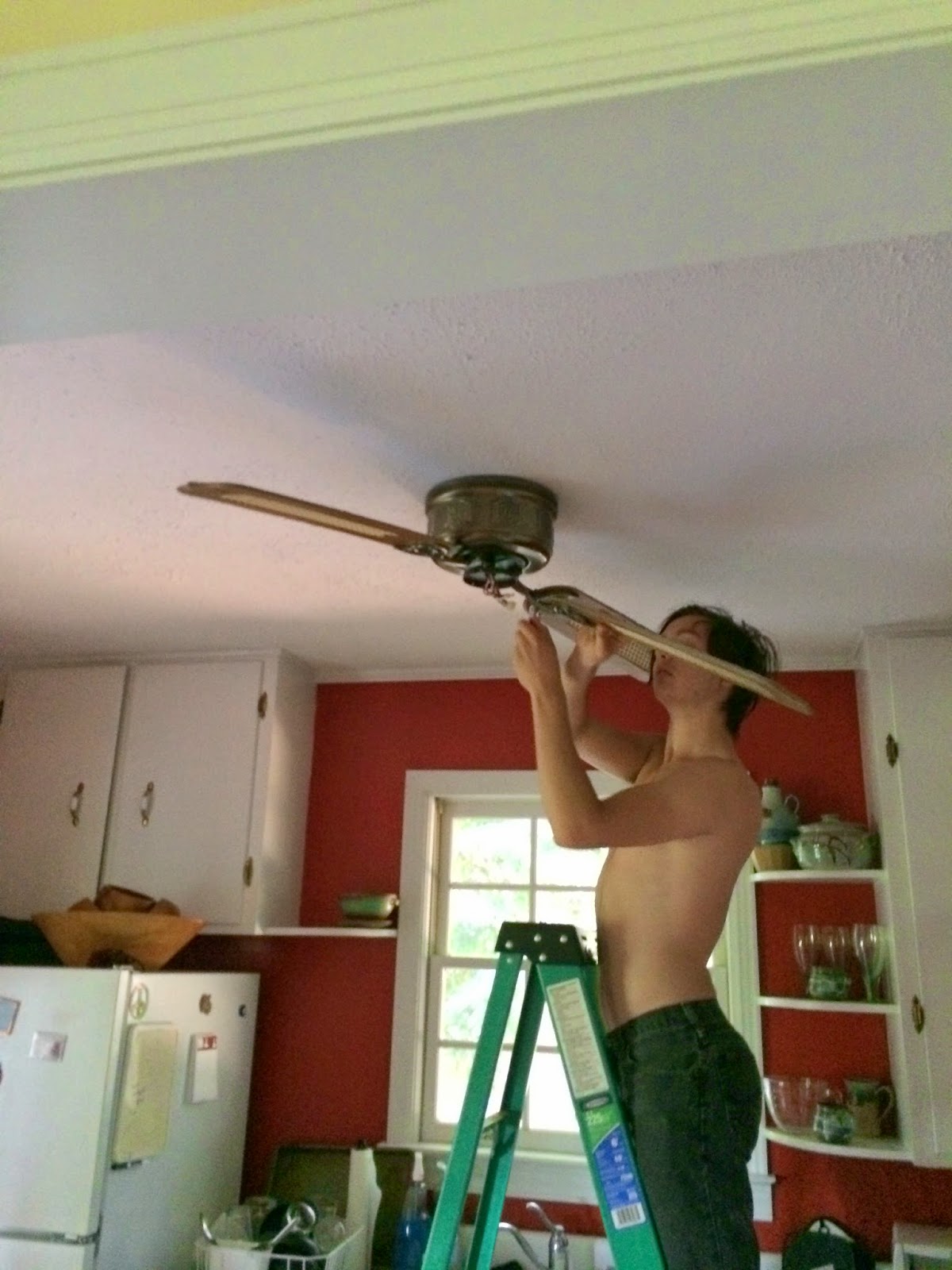 But ceiling fans are very useful in hot climates like mine so I opted for replacing them rather than just putting in lights. I'd installed the ones in my last house and planned to do these, too. I cut the power to the house and my younger son set to work dismantling the fan. Which, while a pain, turned out to be the easy part. The wires coming out of the ceiling were an indeterminate color and there was no ground wire. I called Hunter's tech line and was told to consult an electrician. I asked if this was the first time anyone had ever tried to install one of their fans in an older house, but since I kept my tone reasonably friendly, I don't think she got my sarcasm. I capped off the exposed wires and we moved on to the sunroom fan hoping it would be easier to install. Nope. Every place we drilled appeared to be just acoustic tile without wood underneath. I caved and called in a contractor. 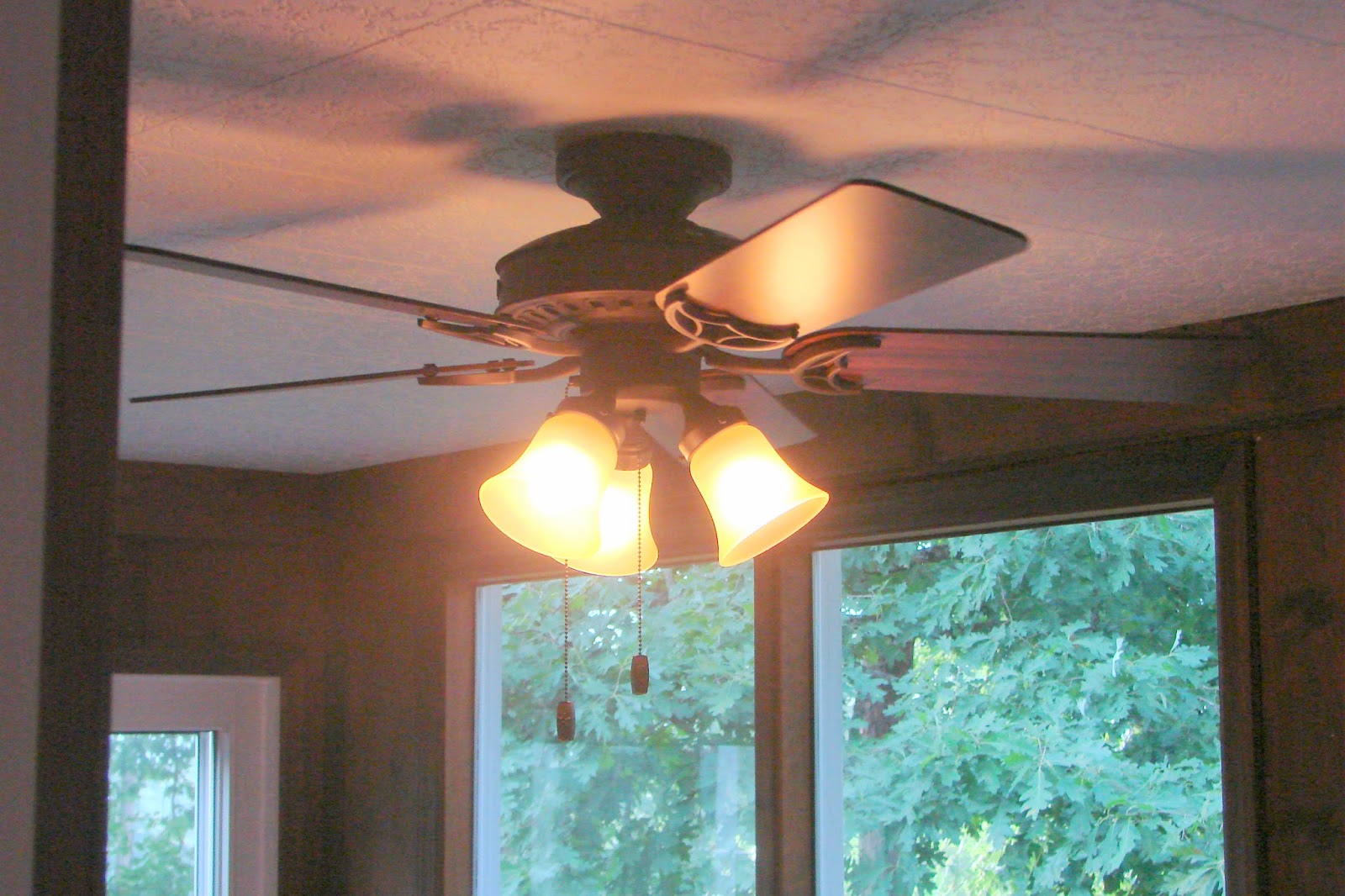 For the sunroom, which has knotty pine walls, I got a fan with dark antique brass. The glass globes are also darker, making the light a little warmer-looking. The contractor and his assistant were apparently able to find the solid wood to hang this from. 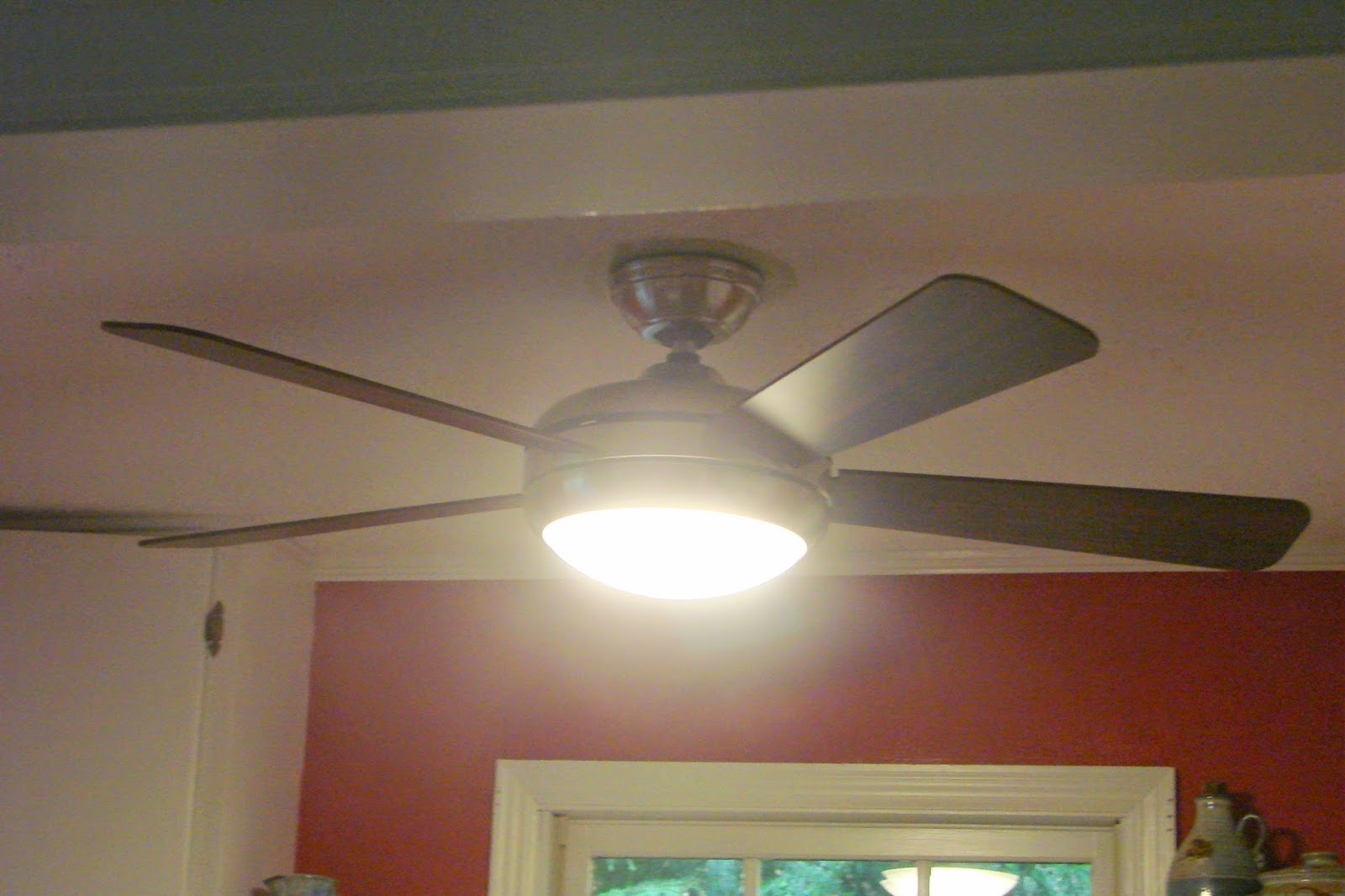 The kitchen to this more modern fan with an LED light fixture. It looks a little like a space ship to me, and operates by remote. (Ignore the red kitchen - that will change.) Two of the bedrooms got these standard sort of lamps. I'm sitting under one now and it's very comfortable. 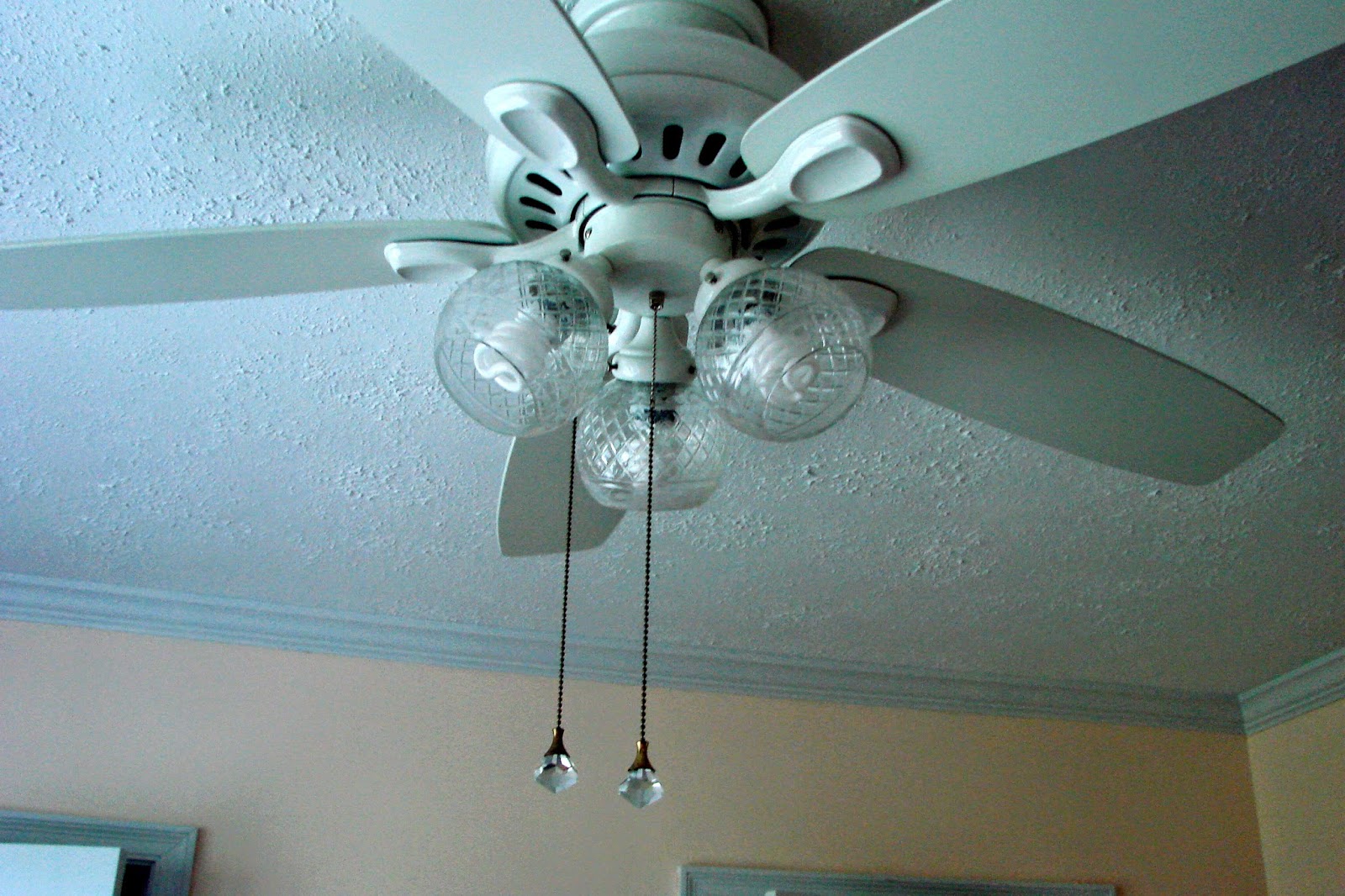 And my room.  I snagged these cut glass globes and pulls off one of the fans I was donating and used them instead of the frosted glass globes and metal pulls it came with. This is the one really feminine room in the house and I liked the sweet, old-fashioned look of it.  The contractor's assistant had actually set aside the crystal pulls for me and said, "I thought you might want them because they are old and fancy." I couldn't argue with that.
Posted by Secret Agent Woman at 6:48 PM