And the lower front bed. 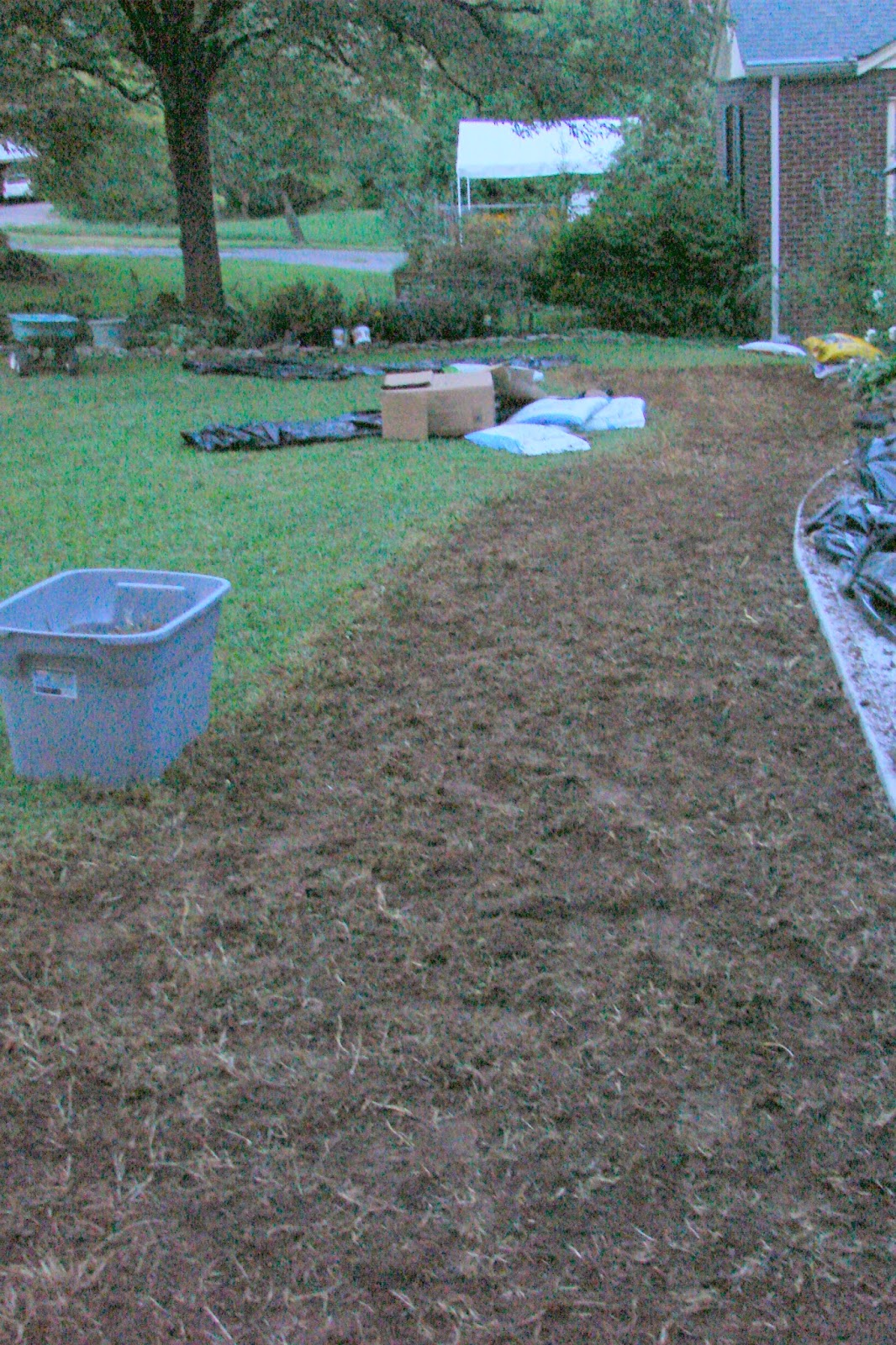 While the walkway to the house was being built, I covered the grass in black plastic to hasten its demise. I tilled it in as best I could to decrease how much of it survived without resorting to chemicals. 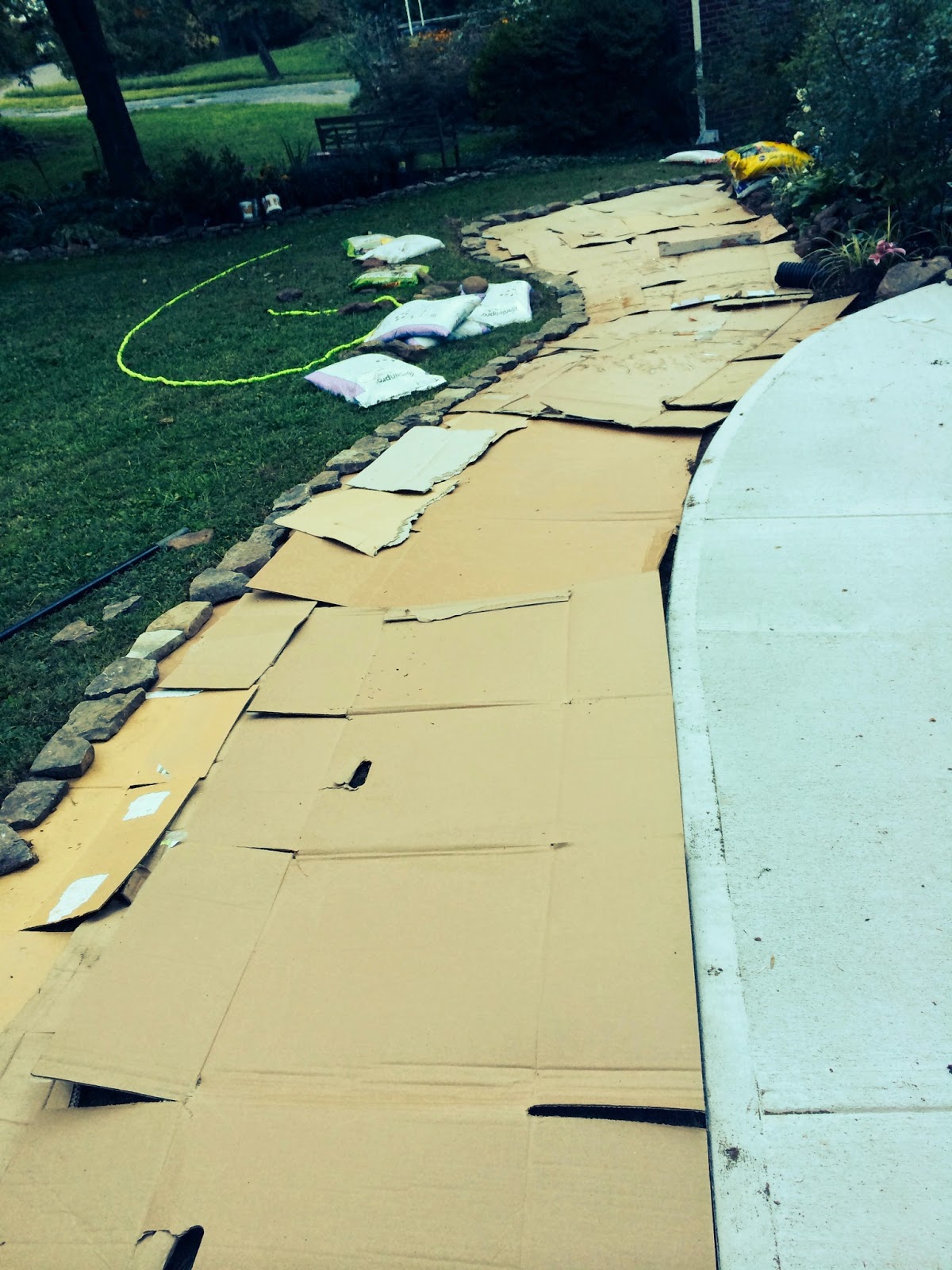 And then the cardboard layer, with the first level of fieldstone edging to hold it in place. 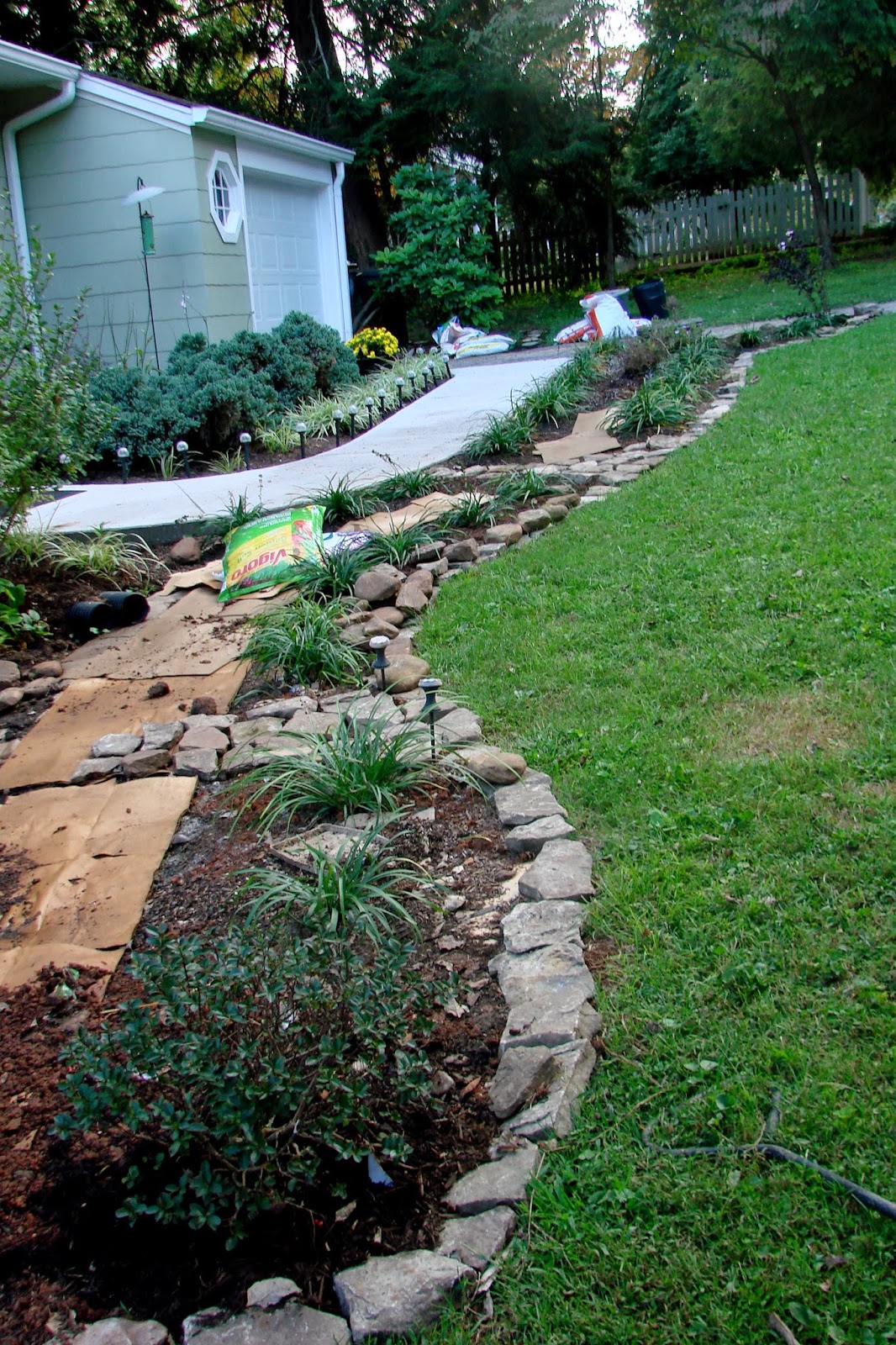 After I got all the liriope and shrubs in, I added soil and some more cardboard before mulching it. In the foreground is a dwarf crape myrtle, a plant I didn't know about until I saw one at the nursery where I'd stopped for something else. It called to me and I walked out with it. 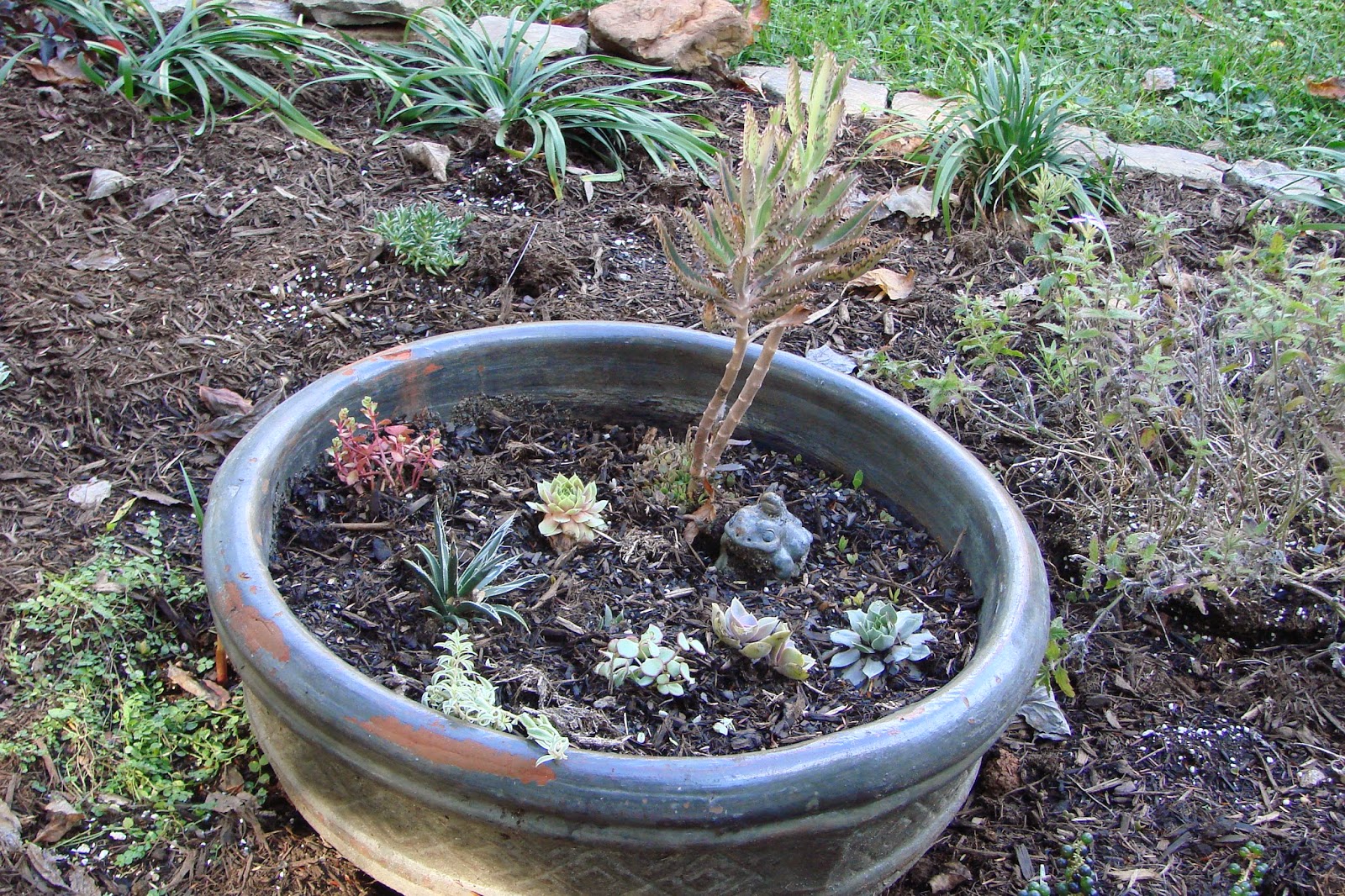 At the other end, I added this flat pot and put in a variety of succulents, like creeping sedum, agave, hens and chicks and that tall mother of thousands.  See the little frog under it?  That's Survivor Frog. She was one of the few things that made it through the fire that burned down the house I helped build as a kid. Best of all, she carried the baby on her back with her to safety. Now the color of ash, she's a reminder to me of resilience. 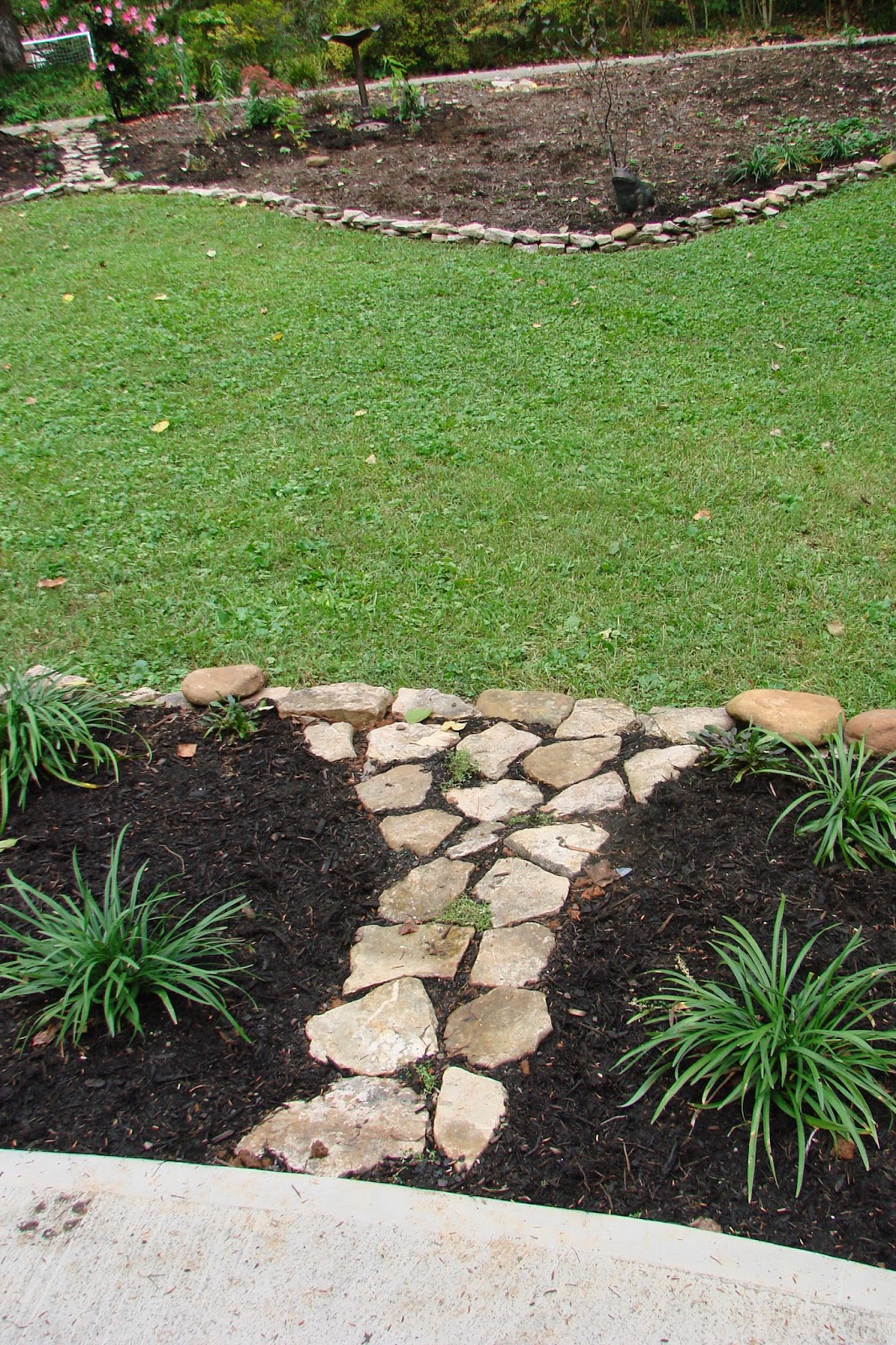 I made a short path out to the yard. Like the upper bed, it has thyme tucked between the stones and ajuga on the sides. Out in the lawn itself, I've planted crocuses and grape hyacinths. 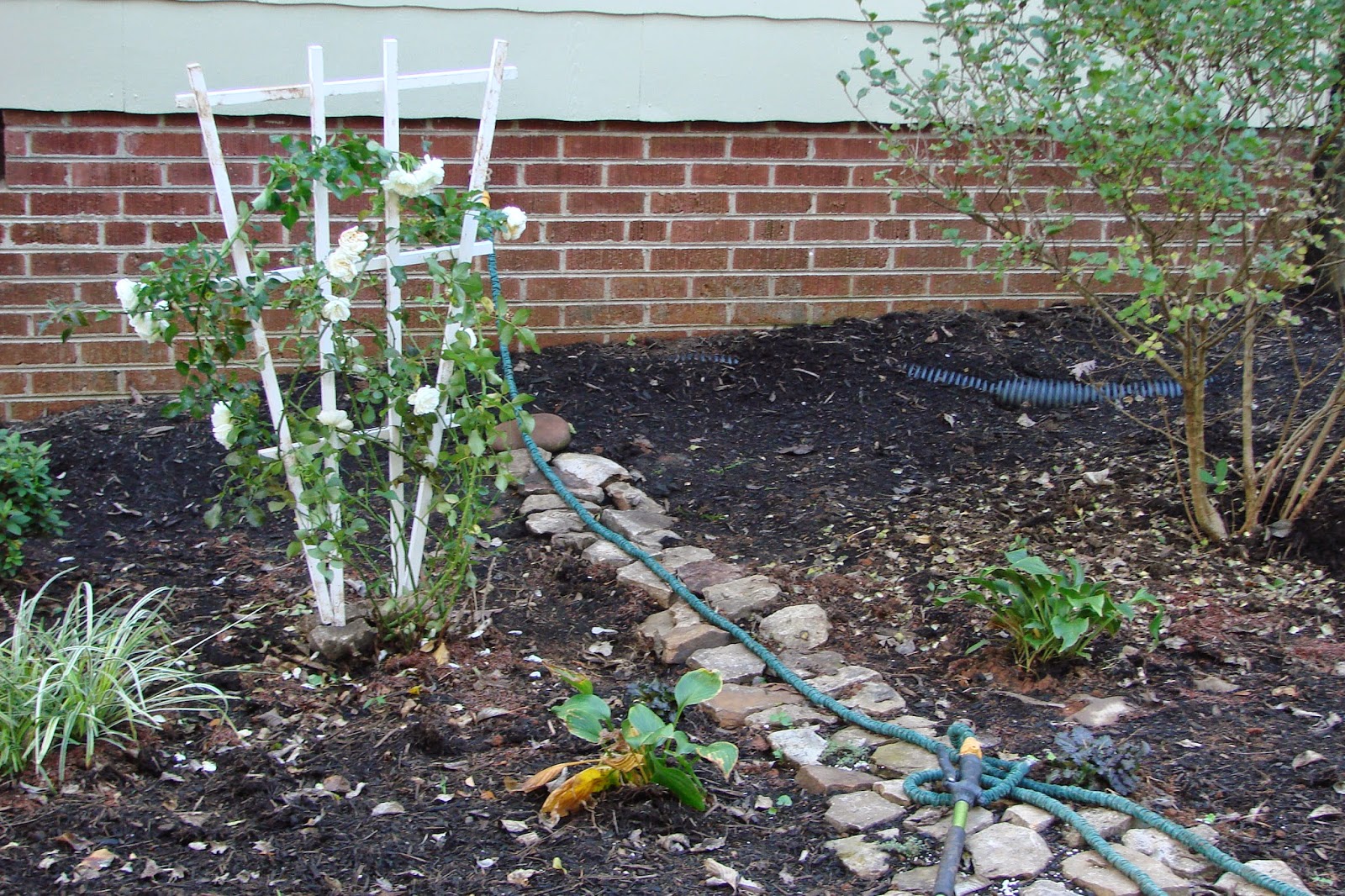 I also made a path to the spigot for the hose. That white rose bush was already here. Honestly, it's not my favorite color rose and I don't like thorny things in general. But it was healthy, so I dug out the hostas that were crowding its roots, removed the too-short trellis, and wrestled it into submission around a taller trellis. It was a formidable opponent and I bear battle scars. That's all I'm going to say about it. 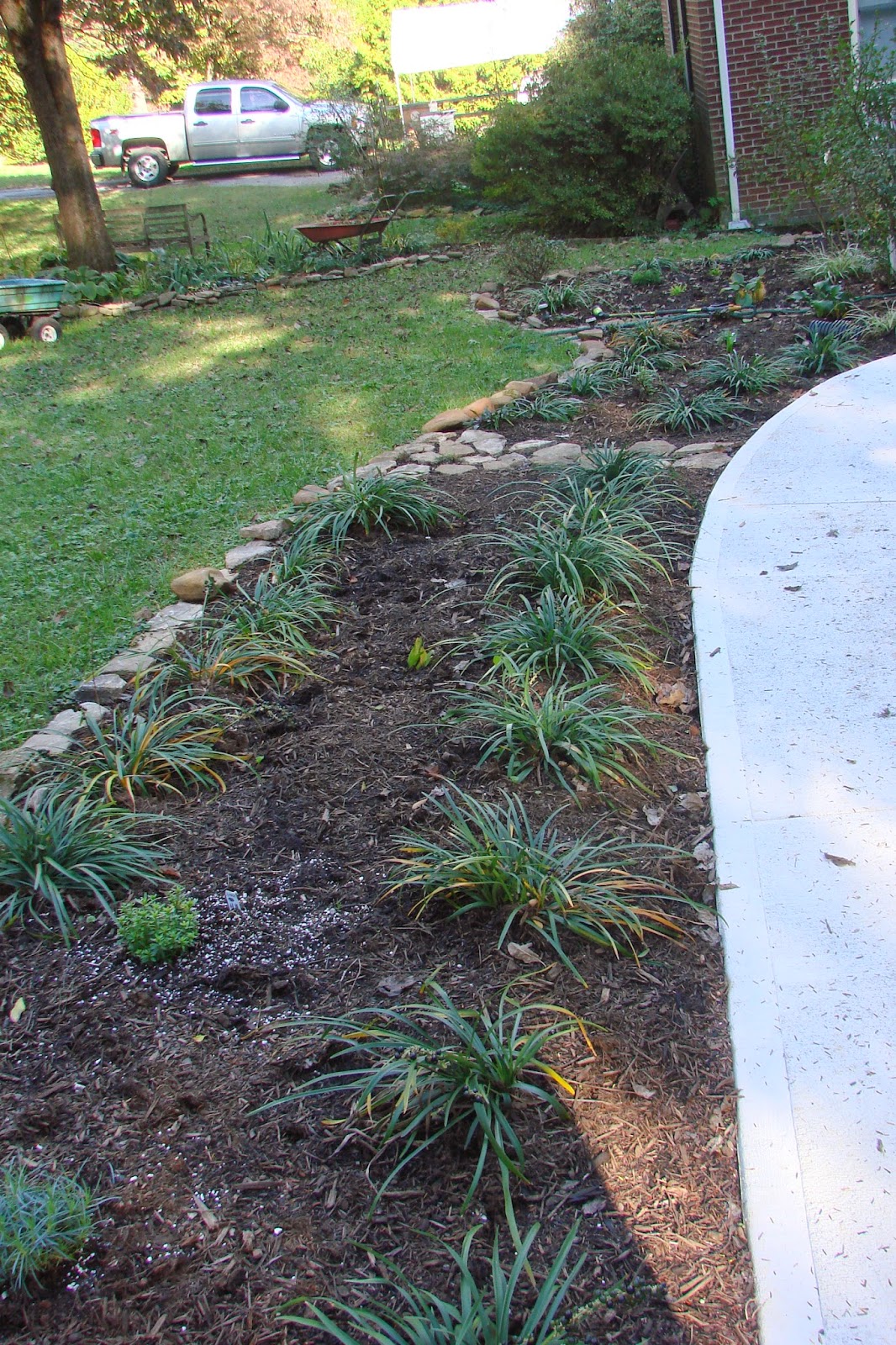 Around all the lirope clumps, I have planted daffodils, tulips and snow glories. After they've finished blooming, their leaves can be tucked down and hidden by the liriope's foliage. In the middle are various low-growing, spreading perennials like dianthus and candytuft and a pair of dwarf buddleia which will fill in the space. 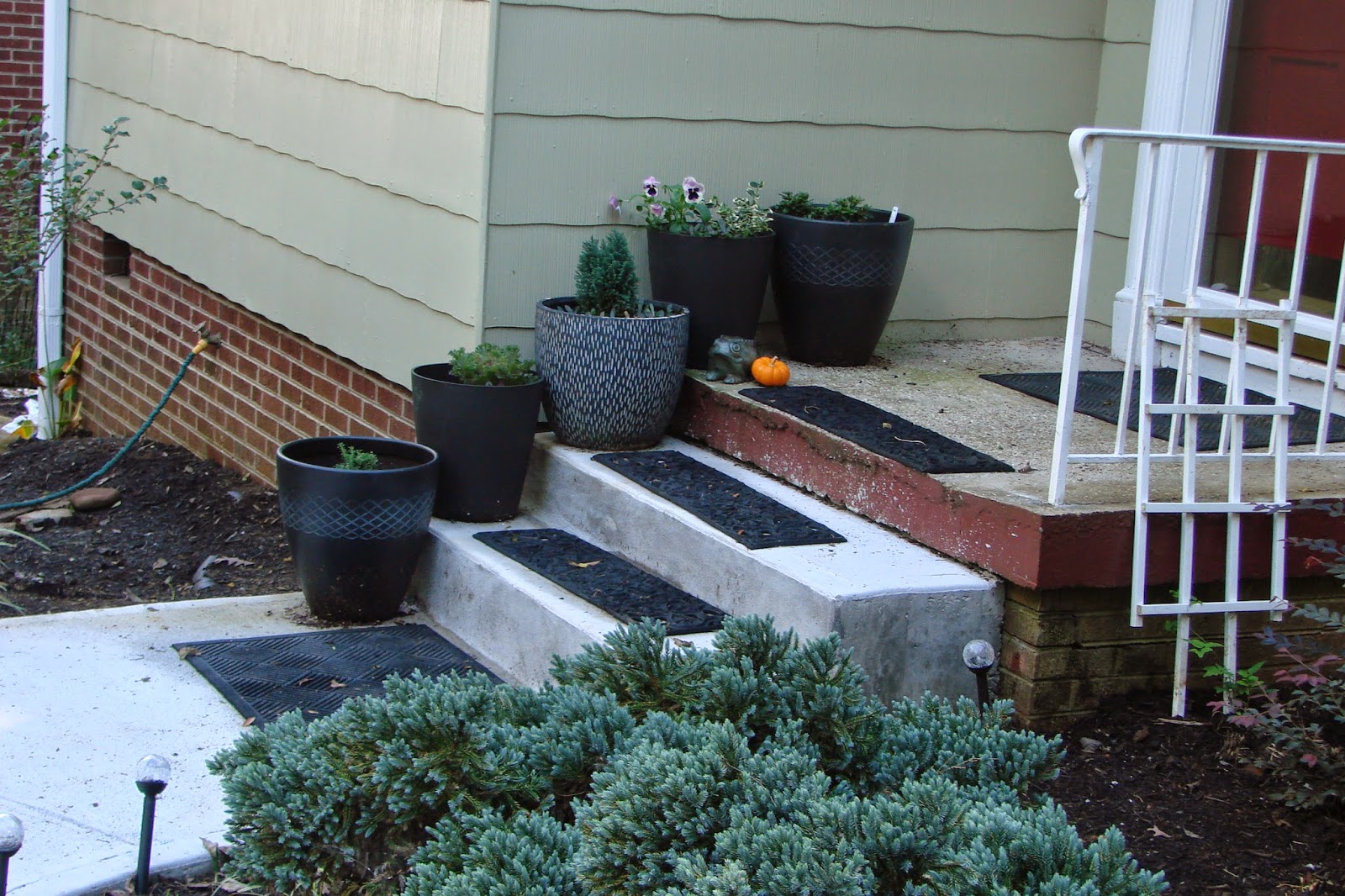 I already had three black pots, but wanted two more for the steps. But when I went to look, I decided they were just too expensive. And then on the clearance rack, I found pots of fading perennials, marked down to $5 each. I bought two of them, put the plants in the beds and used the pots on the porch. Double score! Three now have evergreens - the very top one a dwarf white azalea, the middle a little unidentified conifer, and the bottom a rosemary plant. The other two I'll put seasonal plants in. And yeah, that's a frog by the little pumpkin. Have you noticed I like frogs? 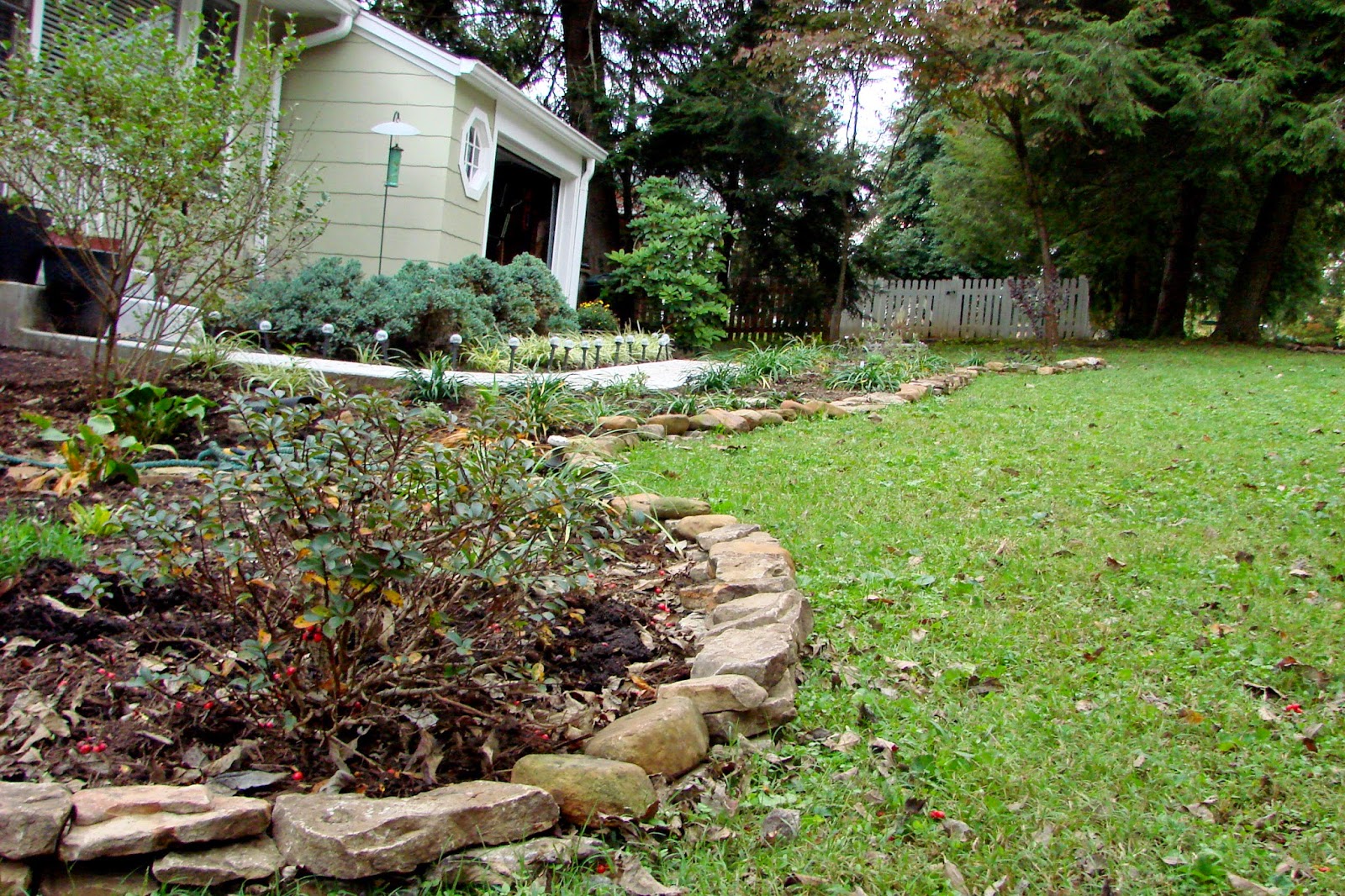 I finished up the fieldstone border wall this weekend. It's like piecing together a puzzle. 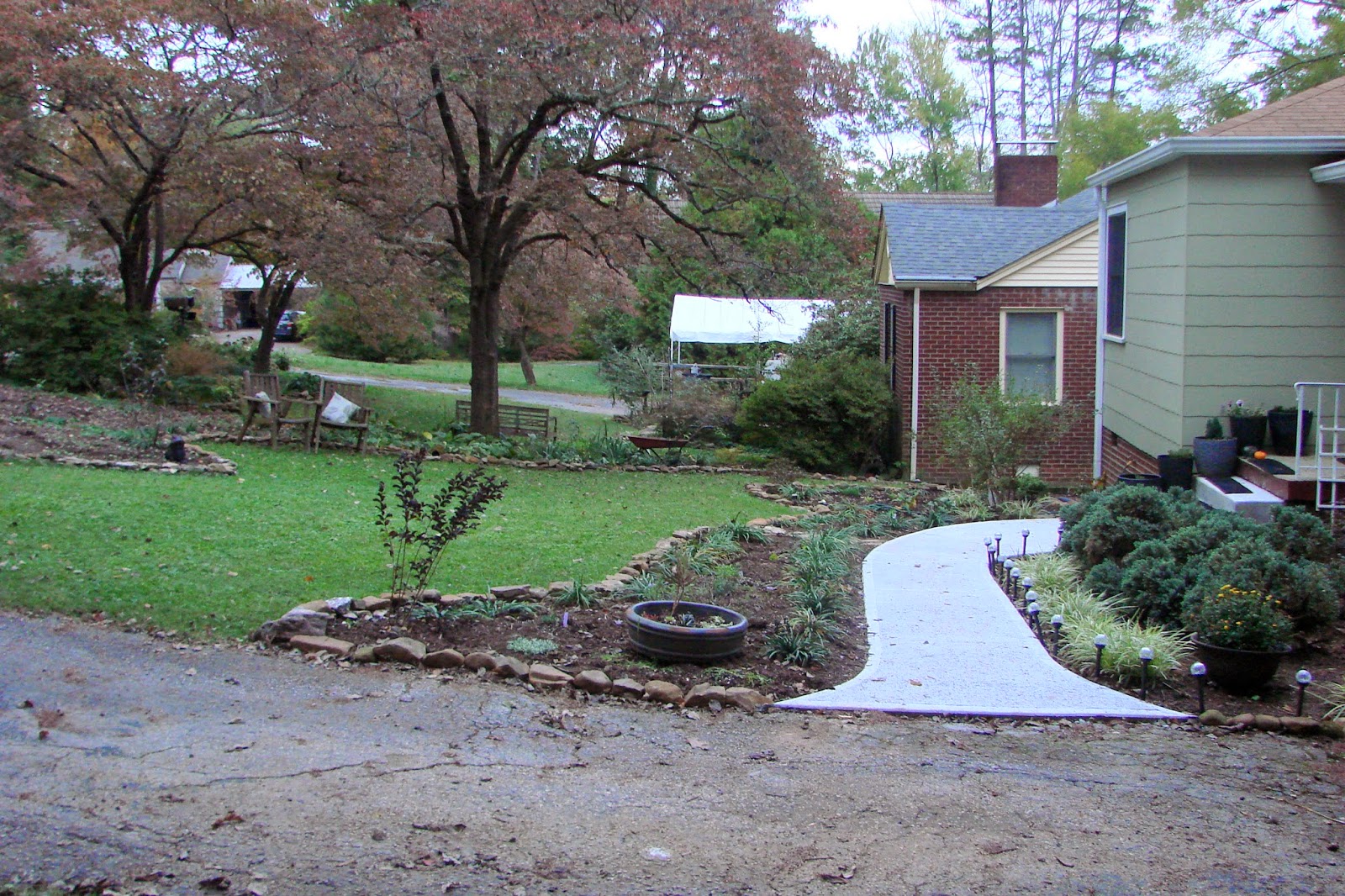 You can see the irregular swath of lawn left in the middle. I moved the old teak chairs from the deck out into the yard so there will be a place to sit. I'm assuming that I will have a chance to actually sit once in a while next spring.
Posted by Secret Agent Woman at 7:33 AM