Sometimes, I pick the wrong book.

And, it keeps on raining. In the meantime, a book review. I took the Goodreads challenge and set 50 books as my goal for the year. Well, what with selling and buying a house, moving and the indoor and outdoor projects, I am behind. So I have been trying to plow through some books. I'd thought about taking a class at the UU church based on this book, but now I'm really glad I didn't. 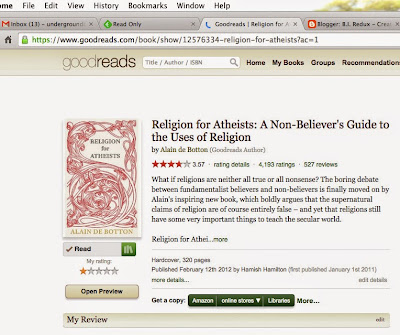 My review:
I really hated this book, and I so wanted to like it since I am a spiritual but nontheistic person. First, I felt the author set up strawmen (in the guise of libertarians) to attack as enemies of anything good religion might have to offer. And then proceeded to offer up a list of "shoulds" for how atheists might incorporate aspects of religious traditions. Some made sense but some were wacky - like mimicking the relic-based local shrines for physical ailments by having "psychotherapeutic travel agencies" to match various types of mental illness with the appropriate destinations. Uh, sure. He'd already stated that "atheism is prone to seem coldly impatient with our neediness," which struck me as odd given that atheists are well-represented in my own field of clinical psychology, where impatience with neediness would be downright bizarre. But his bias was made clear when he later took a jab at the non-institutionalized/non-rule based nature of psychotherapy. Unlike the strict regimentation of Catholicism, "psychotherapy as currently practised lacks any consistency of setting or even any benchmarks for such apparently small yet critical details as the wording on the therapist's answering machine, his or her dress code and the appearance of the consulting room. Patients are left to endure a run of local quirks, from encounters with their therapists' pets or children to gurgling pipework and bric-a-brac furnishings." Yes, Mr. de Botton, that's because therapists are not robots and it's the relationship that's mutative. We don't expect our patients to be automatons and we don't cede our individuality because you have a need for people to have a dress code. Nor are we likely to jump on board with your soul-killing idea of a branded chain of psychotherapists. But where he really lost me? After describing a rather grotesque Medieval church ritual called "Feast of Fools," he proclaimed the modern translation: we "should" have a day every year where we have a big feast and then "copulate" freely with any and all, with no hard feelings from your spouse who is also out fucking around. I get it - he wants to be able to cheat on his partner annually without having to feel guilty about it. Well, there is a reason why it was called the Dark Ages and a reason why the Church gave up that practice. Look, I'm all for appreciating what is good about religion (when it's working) - contemplative practices, art, ritual, charity, community. But it's a false dichotomy to suggest that those things exist within religion and not among the nonreligious. And it also doesn't make sense to emulate the things that appeal to selfishness rather than selflessness. So Mr. de Botton, kindly step down from your self-appointed role as a pseudo-Pope handing down pronouncements and allow for autonomy and flexibility. Oh, and let go of the idea that it's a good thing for you to burn off your baser desires by periodically screwing around on your wife. That doesn't make you an innovative atheist, it makes you a prick.
Posted by Secret Agent Woman at 9:04 PM