Update on the front yard. 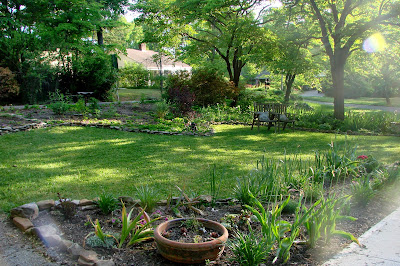 The daffodils and tulips are gone, of course, but other things are starting to fill in, compared to how these beds looked when I first put them in back in the fall.  It will be a few years before it looks a little less sparse, but I can see the progress in the small shrubs and flowers. 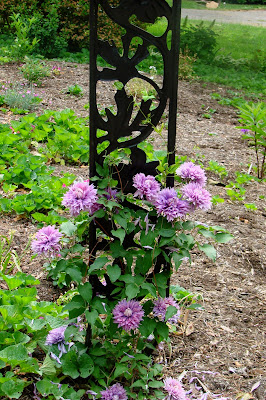 Last year I had a temporary mandevilla planted by the mailbox to give the clematis a change to get established.  The vine has climbed halfway up the mailbox post so far this year. 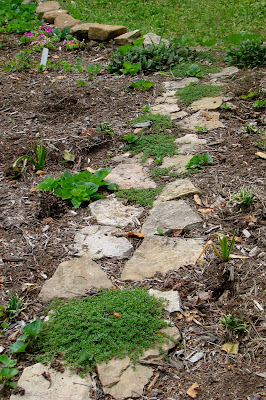 The small clumps of creeping thyme have also started spreading out on the stone pathway. They smell good when you step on them. 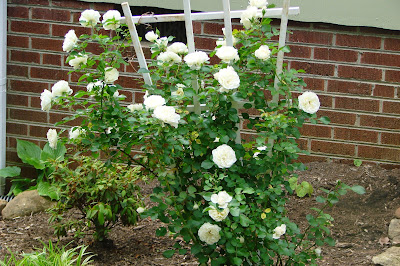 One of the existing plants from the former owner, this white rose, was on a much smaller trellis and had hostas around the base. I transplanted the hostas so they weren't crowding the roses roots and wrestled a new trellis into place. It seems to be thriving this year. I normally avoid any plants with thorns and also wouldn't have chosen white for a rose bush, but I find that I like this one better than I thought I would. 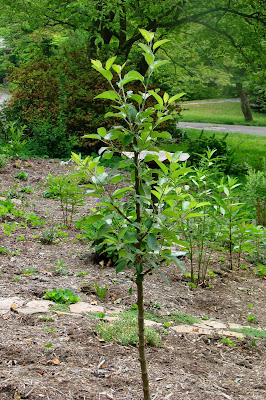 Last fall I ordered a semi-dwarf crabapple. When it arrived it was bare-root, just a single upright stick, and appeared to be dead as a door nail. Let's just say I was skeptical. But in the spring, it started sprouting branches and leaves and looks promising. It'll be a few years before I get actual apples. 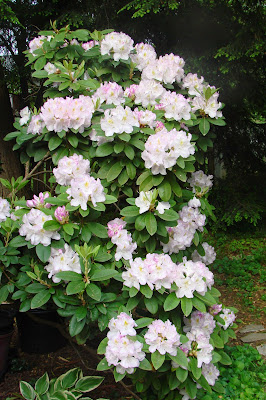 There was also a huge old rhododendron at the corner of the house, but it was past blooming when I moved in. I was happy to see it fully laden with blooms this year. 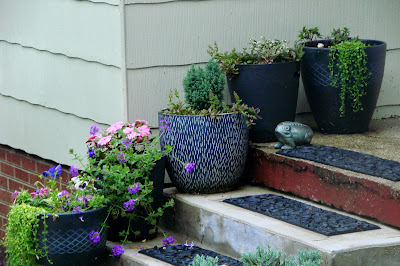 I have some perennials in the post on my porch (a mini azalea, a small evergreen, ajuga and so on) and filled in with some annuals for color. I like walking in past them - it feels like a welcome. 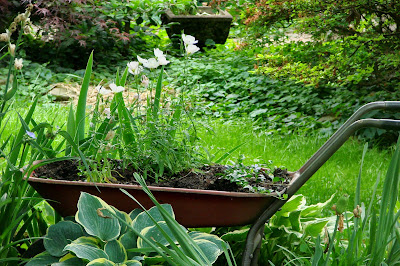 I planted periwinkle and Mexican primrose in this old wheelbarrow I found under the house. I love both those plants bit they will both take over your yard so I want them contained. 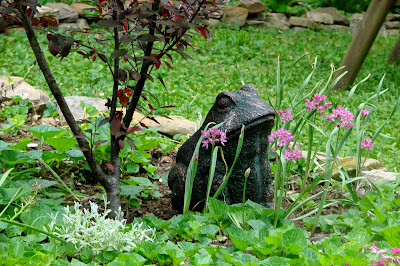 I'll keep posting on the progress as I go. In the meantime, the sentry frog with sit among the flowers under the purple-leaf sand cherry.
Posted by Secret Agent Woman at 7:31 PM