Ireland, Day 1: Into the Gaeltacht. 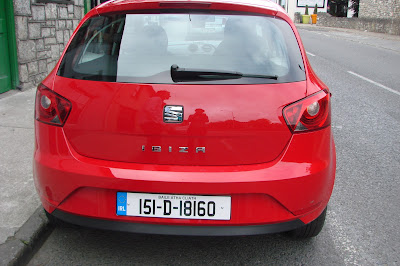 We've been back for a week and still busy. As this blog functions in part as an online journal for me, I may bore you to tears with a day-by-day review of our trip. Here goes: With only 8 nights to spend, we decided to fly into Shannon Airport and concentrate our time in a small area of Ireland. In part because of the whole driving-on-the-wrong-side-of-the-road thing. Which is no small thing on the sometimes insanely narrow roadways. Incidentally, we'd never even heard of a Seat car. I had to look that up when we got home to discover it is a Spanish brand. 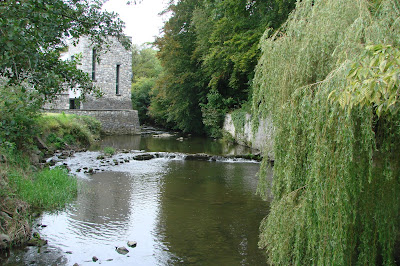 We decided we'd stop along the way in Newcastle West in County Limerick to walk along the River Arra. 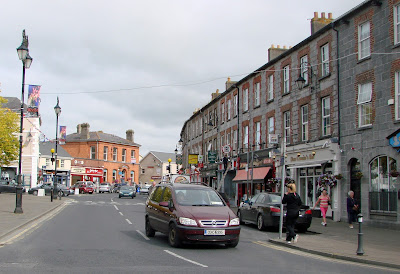 We went to lunch at Dan Cronin's Bar. We had Smithwicks on draft (and yes, I knew how to pronounce it) with chicken and prawn quiche and curry. We would soon learn that in spite of being an island with a strong fishing industry, seafood is not big here. Most of what is caught is exported to France, where they understand the deliciousness of good seafood. Instead, meals lean heavily toward pigs, cows, and of course, sheep. None of which I eat. 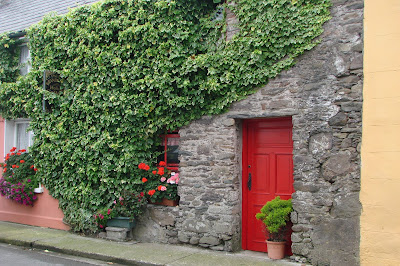 On from there onto the Dingle Peninusula, County Kerry. Maura, the caretaker for the cottage we were renting, told us we'd pass her own place on our way through An Clochán. We'd see the sign that said "Brandon Bay Cottages," she said. It wasn't until our last day that we noticed the sign nearly covered by ivy. I actually took this photo our first day because I thought it was pretty - and even then I didn't see the sign! 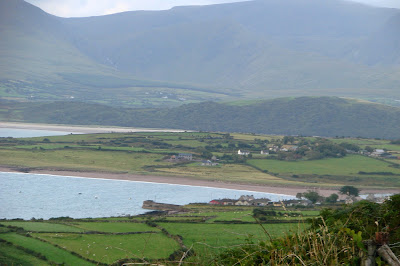 But An Clochán was a metropolis compared to where we were staying. We continued up the mountain, through Bréanainn, and on up Brandon Mountain. Below us was Fermoyle Beach, which begins above Bréanainn and curves around to the other side of the bay. 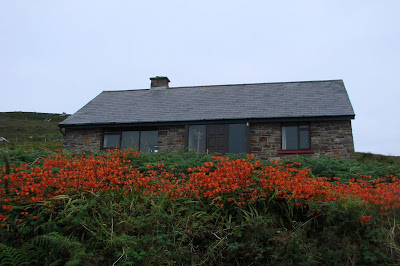 We drove along roads which narrowed to one lane at times. As often as not, brush on the roadside was scraping my side of the car. All the way up to the very last house, the Stone Cottage. 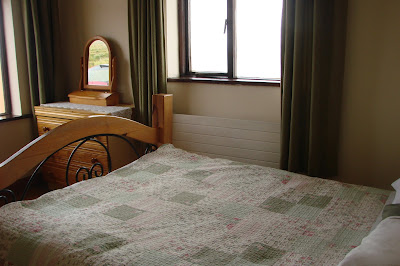 It was a three-bedroom place, but we took the front bedroom.  Both for the double bed, and because of the view. 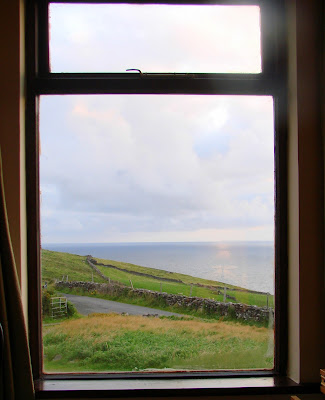 Like this view out one of the bedroom's windows at the foot of the bed. Nothing but rock-wall divided hillside, sheep and sea. 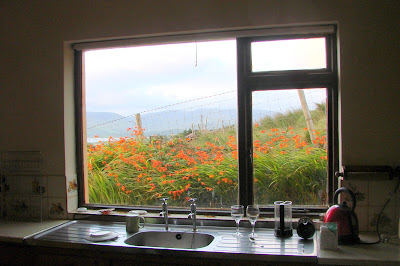 And the view from our kitchen, which made washing up dishes a pleasure. At times the sheep were just the other side of the wire, watching us watch them. 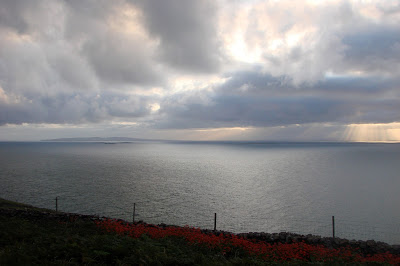 And this was the view from the living room window. It didn't rain, but was a little overcast, with the sun breaking through. 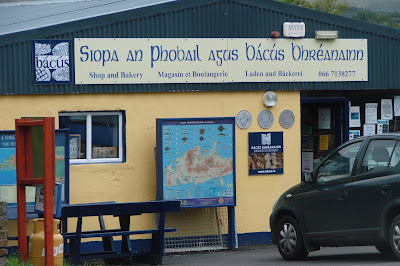 After we'd unpacked, we drove back to Clochán and picked up eggs, sugar, bread, cheese, coffee, and pastries. The woman running the store told us we could get a bottle of wine at one of the pubs in town. 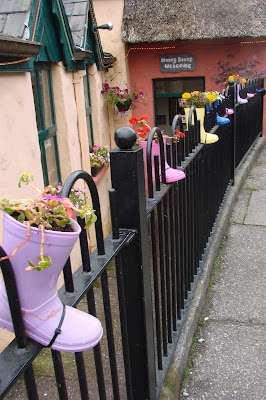 We decided to start with O'Donnell's. It was just so cute, with its thatched roof and colorful boots leading to their entrance. It was dark and small inside, a very cozy atmosphere. Only a bar and a few small tables. 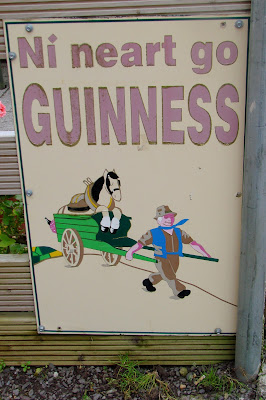 And we were ready for a beer. I had been told that fresh draft Guinness was so much better than the bottled stuff and I'd love it. Well, the truth is I liked it well enough, but didn't love it. I find it bland. Maybe it's because I've developed a taste for strongly hopped beers like IPAs. Still, I had it many times during the trip because I like having local food and drink. 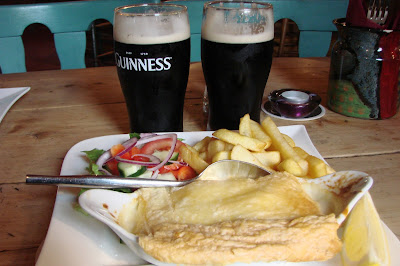 That first night we had a fish and prawn pie, which was quite good. And chips, of course. Because apparently virtually every meal is accompanied by potatoes. 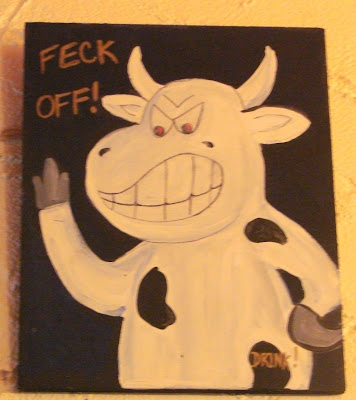 This sign on the wall of the pub just made me giggle. 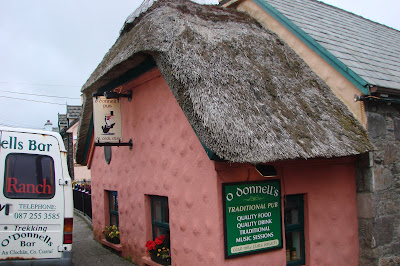 Before we left, we bought a bottle of wine to take back to the cottage with us to drink with the fresh pastries from the market. I tell you, if I ate all the time the way I do when I'm traveling, I'd weigh 900 pounds. I pack away an unseemly amount of food on vacation. 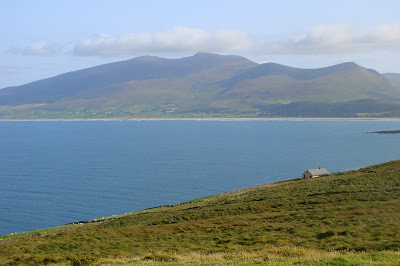 And back for the night to our little cottage on the point. See it way off to the left all by itself? It was just that isolated and serene, and we were thrilled to be spending the next four days there.
Posted by Secret Agent Woman at 3:21 PM