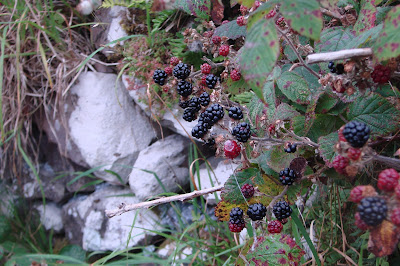 The next morning, we went for a walk along the road to Brandon Point to pick more of the blackberries we'd been eating with our breakfasts. I was surprised to see them ripe so late in the year - I guess it's the shorter growing season. 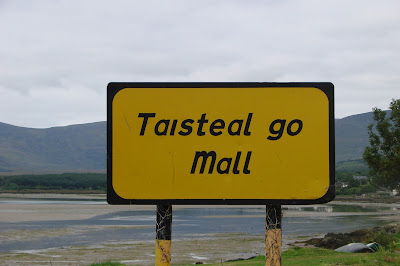 Then back in the car to drive to An Clochán. Driving on the wrong side of the narrow roads stayed a little nerve-wracking for me which meant that I would occasionally say, "Go mall!" when I thought my fiancé needed to drive a little slower. I'm pretty sure that was helpful. 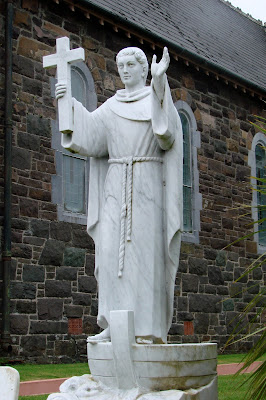 Bréanainn was born in 586 AD in Trá Lí, a town we had passed through our first day. He became a priest and later built a monestary at the foot of Mount Brandon. He set out from there to search for the Garden of Eden, which he believed would be located on an island. As it happens, I've listened many times with my younger son to Mick Moloney's version of a song about Brendan:
"Oh, I was an artist with canvas & paints
I sailed with St. Brendan & his jolly saints.
We told a good people goodbye for awhile.
We sailed for St. Brendan's fair isle, fair isle,
We sailed for St. Brendan's fair isle." 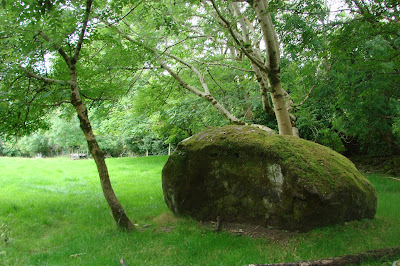 St. Brendan stands in a strangely small boat outside the church in Clochán, where we parked to walk along a path walk through the townlands of Clochán Sídh and Doire na Muice. But honestly, we weren't even sure when we were passing through "townlands." Apparently a couple of houses makes a townland. 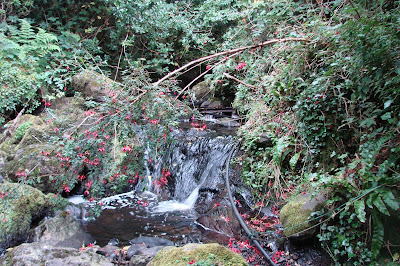 We did find this little glade with a spring back in the woods. Maybe it was Doire na Muice, where St. Brendan banished the pagan wild boar, who protected the magical wood of oak. St. Brendan used the oak to build his boat to sail from Ireland to Scotland, then Iceland and Greenland, then America. 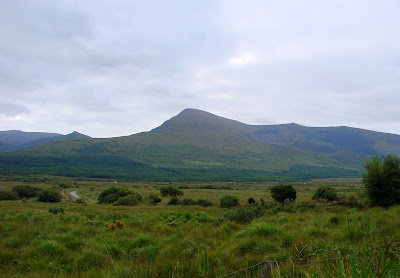 The boar was banished to Loch Geal where he appears every 7 years to light up the whole valley.  It's not clear exactly what that would entail. 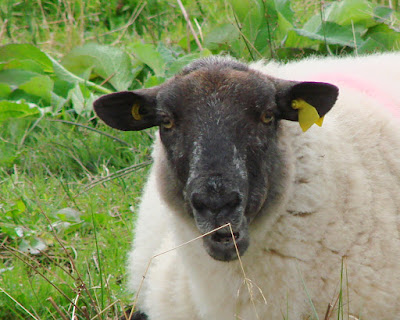 And indeed, there was not a wild boar to be seen. Just the placid black-faced sheep grazing and watching us walk by. 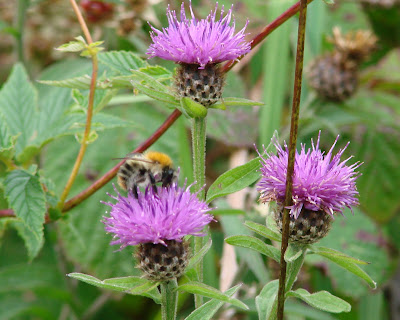 It was a gorgeous day, sunny and clear. 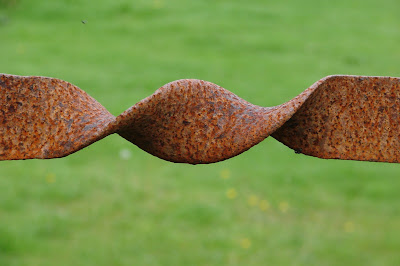 We passed a few houses and lots of farmland. 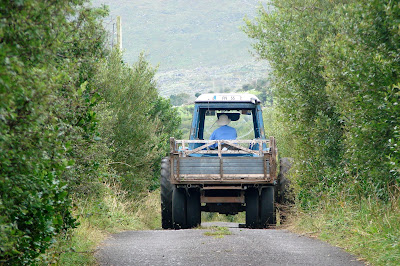 When this tractor came through we had to duck into the shrubbery along the side of the road to get out of its way. 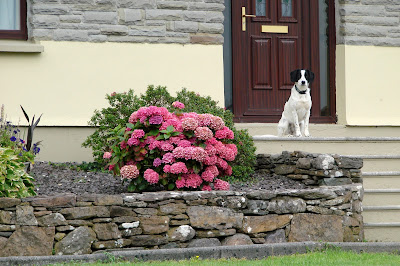 At one house, this friendly dog left his porch and leapt up onto the rock wall along the road, eager to play. 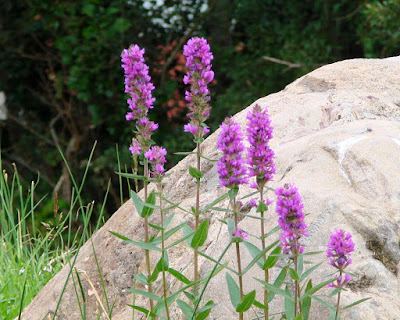 We took a wrong turn on Mullach Road and extended the walk a bit. That took us out by the little market in Clochán, so we bought a chocolate scone to split before returning to our cottage. 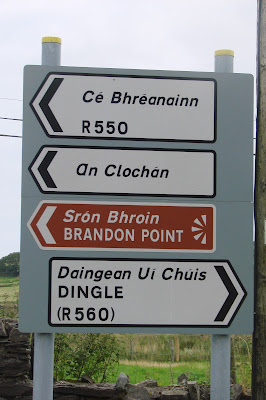 It was still morning, and we were headed for a day in Dingle, so it was back over Conor Pass. 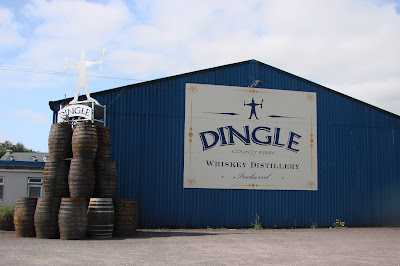 We'd decided to tour the Dingle Distillery, and artisan distillery over the bridge in the Milltown area. 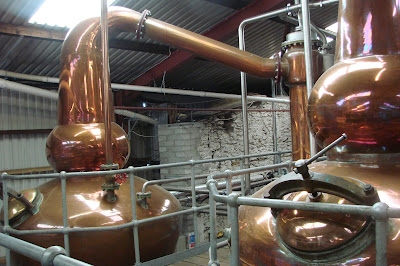 They produce small batches of gin, vodka and whiskey in these copper pots. 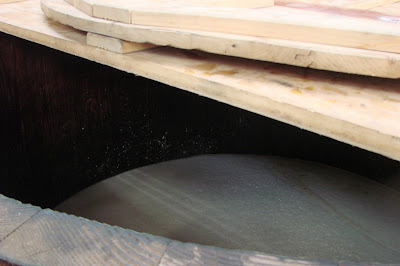 There were only a handful of us on the tour and the guide, who we dubbed "Whiskey Joe" had us each lean over the fermenting barrel of "distiller's beer," which would later become whiskey. One by one we breathed in and recoiled at the acrid scent. It was flat impossible not to react to the burn. 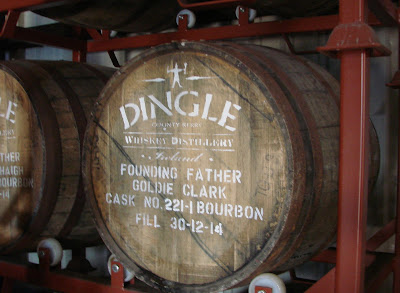 The barrels where the whiskey ages are marked depending on what sort of alcohol was originally produced in them - bourbon, port or sherry. 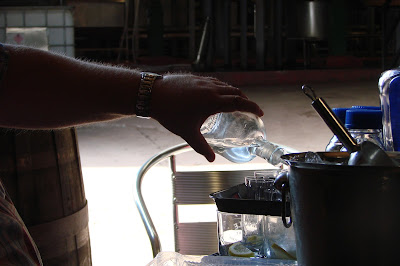 At the tour's end, we sat down for a tasting. First the 63.5% (127 proof) new spirits which would age into uisce beatha. Then Whiskey Joe gave us generous pours of the vodka and gin to sample, poured over lemon slices and ice. I added tonic to both of mine but still could not choke down the gin. The vodka, though, was excellent. 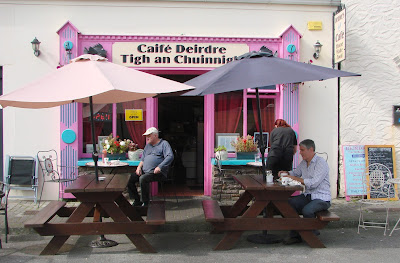 We had walked around earlier buying gifts for the kids.  I'd texted both my younger son and my older son's girlfriend about what my older son might like and as I waited for answers, we spotted a music shop and bought him a tin whistle made in Ireland. Just after I bought it I saw a text from his brother suggesting a tin whistle. A few minutes later, I got a text from the girlfriend suggesting a musicals instrument, but for her sake, anything but a tin whistle!  Oops. Shopping done, we walked up to Caifé Deirdre for tea and scones with current jam and clotted cream. 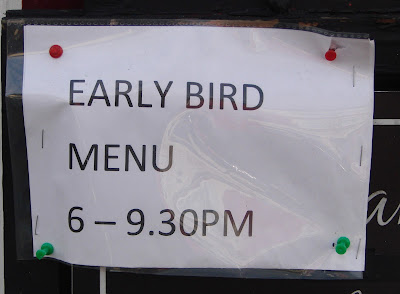 To balance out the crazily late breakfast times, we discovered that "early bird" dinner is much later here than in the states. 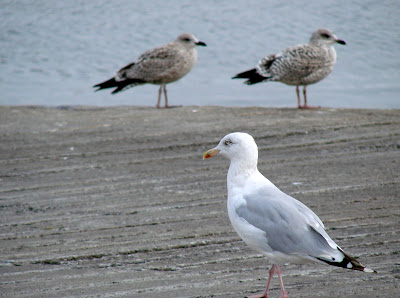 Down to the harbor again to Murphy's pub to try half pints of Hop House 13, a Guinness Irish Pale Ale. 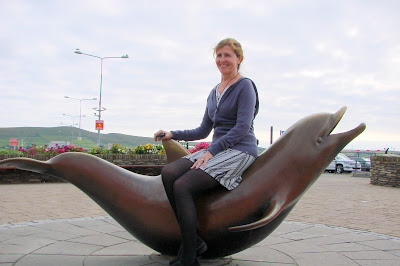 We walked around on the pier for a while just enjoying the beautiful day. 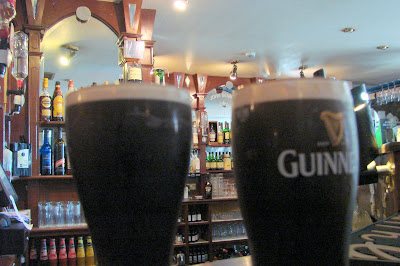 Then to John Benny's for half pints of Guinness, where we chatted with the bartender JP, who was adopted by a couple from Connecticut but brought back here to live when he was 7. He had an overly romanticized view of the U.S. 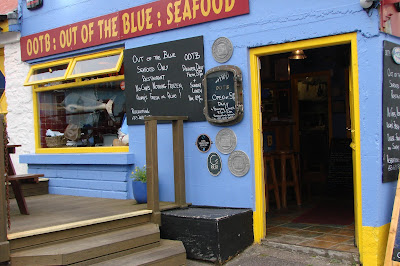 We'd asked around and ended up at Out of the Blue, which looked unassuming from the outside. It advertised "No chips, nothing frozen" and looked like a fish and chips stand but came highly recommended, so we went in. Turns out, it was an elegant restaurant with a French chef who worked with local catches. We had a duo of smoked and pickled salmon, mussels Marianne, and char-grilled cod with beets, snow peas and potatoes. All with a tempranillo and all absolutely delicious. 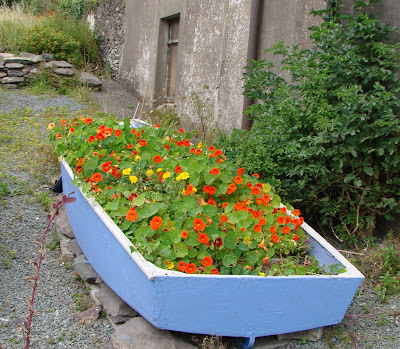 We headed back through town and then drove back over the pass under a darkening sky. We decided to stop one last time at O'Donnell's for a nightcap. John, the young bartender, was there along with a couple of old sheep farmers and we spent quite a while talking with them. I was itching to use the Irish I'd learned for the trip and said hello and ordered an Irish whiskey and then asked my fiancé if he wanted one. "Día dhuit. Dhá uisce beatha, le do thoil." (then to my fiancé) "Ar mhaith leat rud éigan a ól? Uisce beatha?" He answered, as coached earlier, "Ba mhaith liom." John looked bemused and I asked him if my pronunciation was close. He said it was perfect but also wondered if I had expected that everyone there would speak only Irish. I had to explain my habit of learning a little of the language of any place I travel. We stayed for three drinks because it was fun talking with them about life there in Clochán. Before we left they had been picking lotto numbers so we had each of them, plus the woman who cooked, pick a number for us to play when we return. (Ahem. We did not win.) 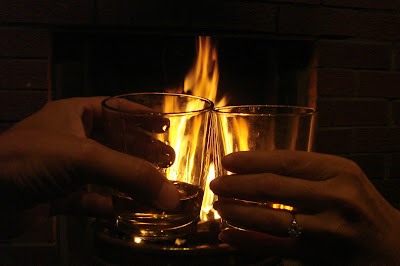 Finally, we drove back to the cottage and built a turf fire. Rather, we tried to build a turf fire. There were no matches to be found, so our landlady's husband, Seamus, brought matches and stayed long enough to get the fire going thoroughly.  We had a last shot of whiskey in front of the smoky fire.
Posted by Secret Agent Woman at 8:13 PM