I keep thinking I'll get less busy and instead I seem to be busier all the time.

I'll just have to be a sporadic blogger for now. I'll visit when I can, eventually finish up the Ireland travelogue, and post about life once in a while. 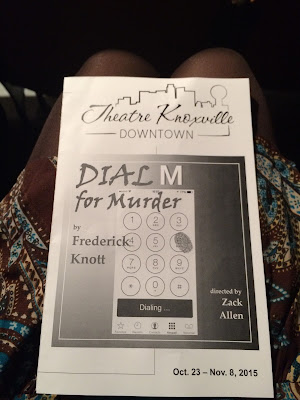 Like my adjustment to being in a blended family. I grew up in one, so it's not exactly foreign to me. With my own kids, I tried to spend time with each of them individually because the dynamic is entirely different when there is just one kid along. This morning, for instance, I watched "Top Gear" with my younger son and then went with him to try on boots while everyone else went off to church. A couple of weeks ago, we took only the older daughter to see a play at the tiny theater downtown. It was pretty good, if perhaps a wee bit over-acted. But she is in theater herself and absolutely loves being taken to plays. I guessed that the murderer would be Colonel Mustard in the Library with the Wrench. Wrong game. And my fiancé horrified his daughter by uttering aloud the name Macbeth. An usher overheard and he had to stand in the aisle, spin around, curse over his shoulder and spit into a trashcan. All in the name of protecting the actors from superstition. 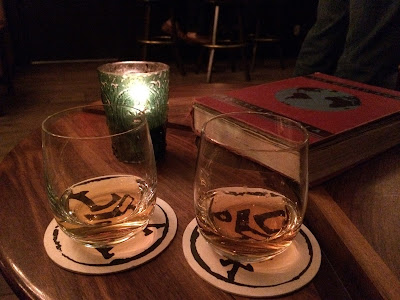 In the midst of moving we had my birthday, which we celebrated by going out to dinner and then ducking into our favorite speakeasy bar for an Irish whiskey to reminisce about our trip. Fall is often very mild and we eat outside when we can. On one of those occasions several weeks ago we had this conversation at dinner:
Me: "You know, in the 8 months or so that we've been together, we ..."
Him: "Eight months, 15 days and 2 hours, give or take."
Me: "That's not normal." 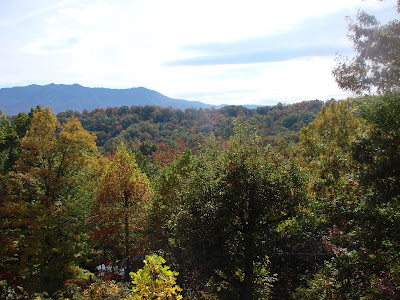 But I actually like that he does that sort of thing. It's very handy - I no longer have to figure out how old someone is, when an event will be occurring, or what day a certain date falls on - I just hand that problem over to him. On the day of Halloween, we drove down to the mountains with the older daughter to visit my soon-to-be brother-in-law who was spending a little time in the Smokies. He greeted me with a big hug and later pulled me aside to thank me for "giving my brother back something he'd lost - his smile." 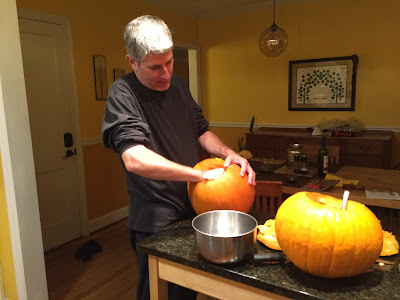 We decided at the last minute that we'd carve a couple of pumpkins to lure trick-or-treaters to our home.  All our own kids would be elsewhere that evening, but after the block party earlier in October, I wanted to participate in the night in this kid-packed neighborhood. We ended up putting one out in the street so people would see easily that we were handing out candy. 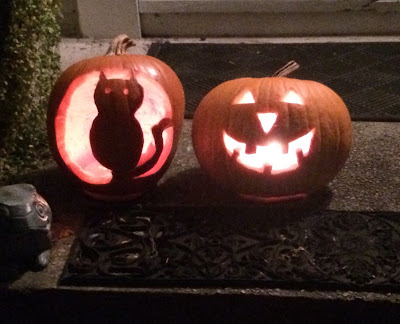 The finished jack-o-lanterns. The one on the left is supposed to be a cat. Myself, I alway carve the same traditional smiling face. I can't help it. It just looks so happy to me. I was surprised at how many of the kids' parents were also in costume as they escorted their kids from house to house. 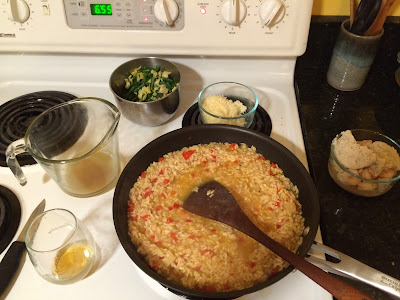 There's been lots of the usual chores - gardening and cleaning and cooking. Always cooking. One morning we were sorting through recipes to find something to take to a pot-luck reception and I commented idly that I made good risotto. "Prove it," he said. Challenge accepted. It's a zen experience really, because risotto just can't be rushed. And one I enjoy - there's something so lovely about slowly stirring broth and wine (and a shot of bourbon) into the arborio rice. I ended up making a seafood and vegetable risotto with shrimp, crab, sweet onion, red peppers, spinach and green beans. 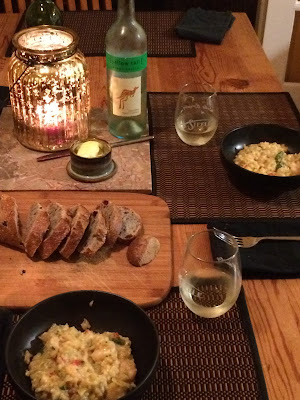 And yes, he agreed it was delicious. Some dinners we have on our own, some with one or another of our children. A couple of nights I spent tending to my younger son who had all four wisdom teeth (including an impacted one) cut out. Through a series of snafus on the surgeon's office's part, there was a very long delay in getting him any pain medication. There's nothing quite like helplessly watching my normally stoic son in severe pain. So I sheared off the side of a molar on a Lifesaver in solidarity. Because I take mothering seriously. 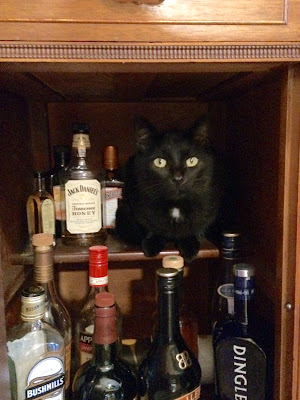 And on top of everything else, we have been adopted by a stray cat in the neighborhood. He has the characteristic notched ear of a feral cat who has been captured, neutered and released. At first he'd sit on our deck and watch us eat, consenting to be petted once in a while. That merged into brief visits in the house and then the fateful night when we were too cozy to put him out at bedtime. We named him Hodr (more correctly Höðr, but that's cumbersome to write), the Norse god of all things cold and dark, as a nod to the Norse heritage we both have. We can't even pretend that Hodr isn't ours anymore. We feed him, gave him flea medication, and he now sleeps on the end of our bed. When he isn't climbing into strange places, that is. 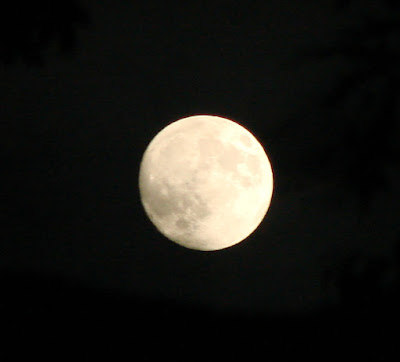 Last night, one of each of our kids were here. The younger daughter was reading from one of the Harry Potter books to me before bed, and then we lay for a while talking. I mentioned that my youngest kid was here and her Dad's youngest kid was here. And then I amended that to, "Well, actually, now you're my youngest kid." She nodded and snuggled in closer and we continued talking for a bit. I kissed her goodnight and then I paused for a minute in the hallway to listen to the steady breathing of my younger son in the room next to ours. I slipped into bed and my fiancé wrapped around me. As I lay there in his warmth, I couldn't help but reflect on the enormous turn my life has taken this year. Busy? Yes. But unhappy about that? No way.
Posted by Secret Agent Woman at 5:47 PM