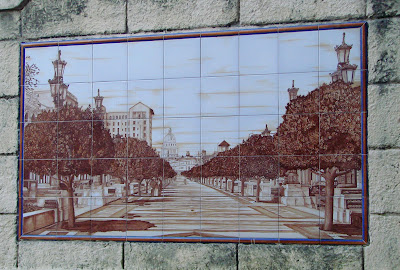 With an itinerary geared toward architecture and culture, one of the first places we hit was the Paseo de Martí, known locally as the Prado. 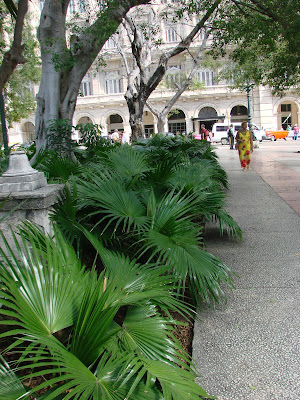 From our neighborhood, it was a few blocks walk along Neptuno to Parque Central, which anchors down the southern end of the boulevard. Parque Central, where we caught the bus out to the beach on our first afternoon, was built in 1905. 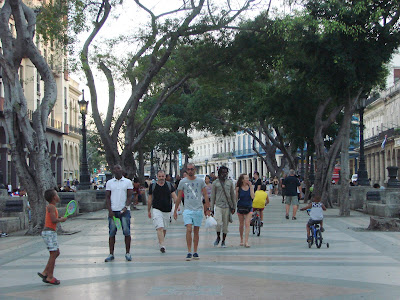 The Prado was the first paved street in Havana, and runs for a kilometer out to the mouth of the harbor. It was begun in 1772, along the area which used to hold the city walls during colonial times. It was remodeled by French landscape architect Forestier in 1924, with the addition of trees and benches. 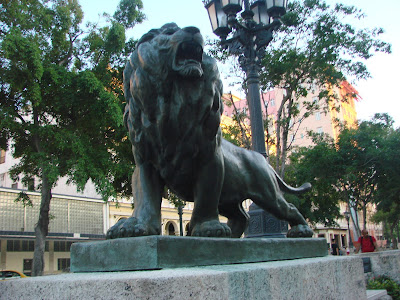 There are eight bronze lions guarding the promenade, 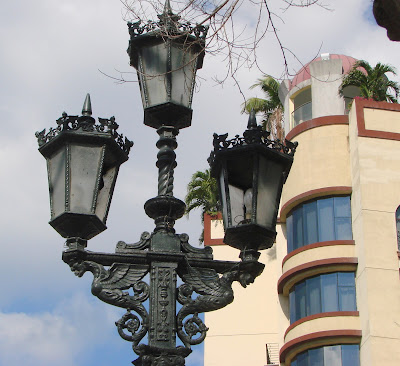 and lamps on metal posts in the shape of griffins. 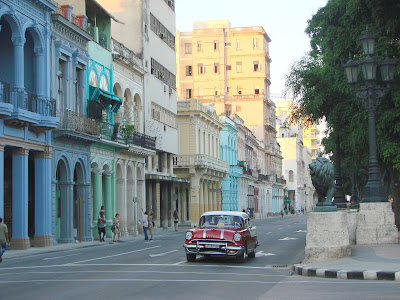 The pedestrian walk divides Habana Centro and Habana Viejo, the old part of the city. 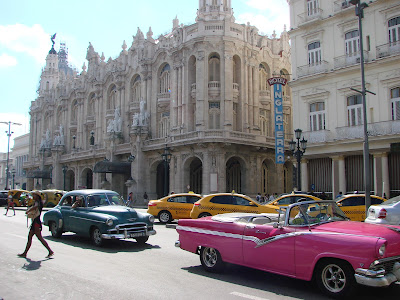 Across from the Parque is the Hotel Ingleterra. Built in 1856, it is the oldest remaining hotel in Havana. The sidewalk in front of the Ingleterra was a focal point for rebellion against Spain. 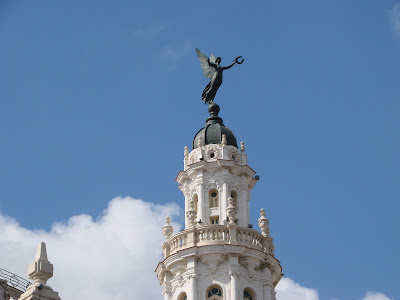 Next to the Ingelterra is the former Centro Gallego (Gallician social club built around the old Teatro Tacón). It has a baroque façade and was built in 1915 by Belgian architect Paul Belau. Today the building holds the Gran Teatro de la Habana, home of Modern Dance Companies. On its roof is the Winged goddess Nike. 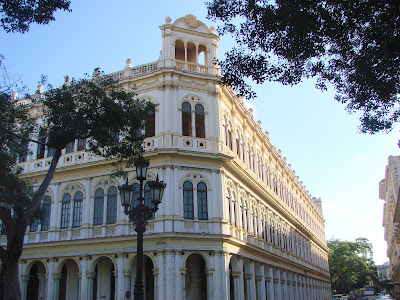 A little farther along there is the triangular Hotel Plaza, built in 1909. 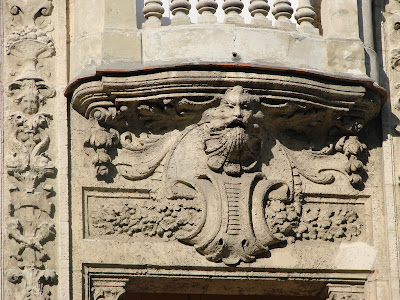 We passed the Palacio de Matrimonio, built in 1914, with its neo-baroque façade, and ornate interior. 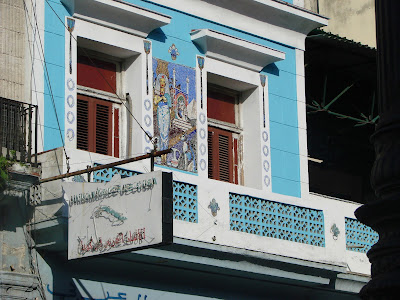 The Union Arabe de Cuba has a colorful mosaic on the front of its second floor. 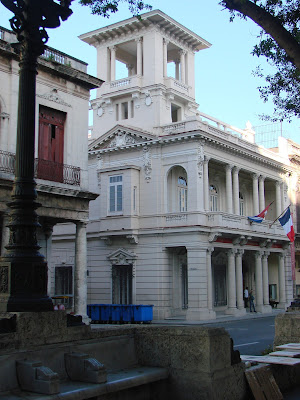 On the west side, the Casa del los Cientificos, former home of President José Miguel Goméz, is now a hotel. 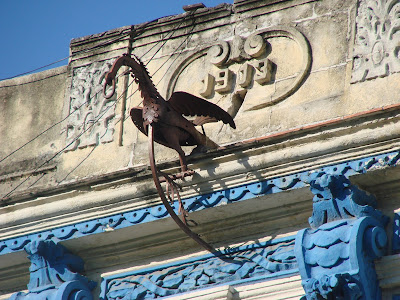 I'm not sure what is in this building, but I liked the metal creature (bird? dragon? phoenix?) on the front of this ornate blue and white building.

On several occasions, I just stopped to admire the beautiful colors of the buildings. 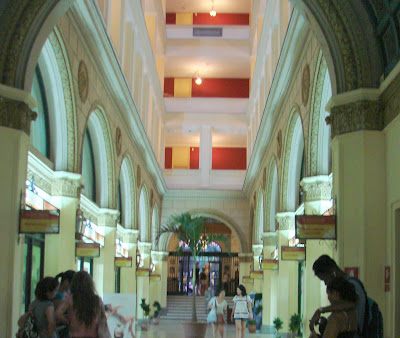 We'd planned to have a drink on the terrace of the Hotel Mercure Sevilla, but ended up going to another place in Centro, that I'll cover later. It was an interesting building, though - opened in 1908 and Moorish-inspired, the structure was modeled after the Patio of Lions at Alhambra in Granada, Spain. Apparently it was run by Uruguyan mobsters in the 1940's. 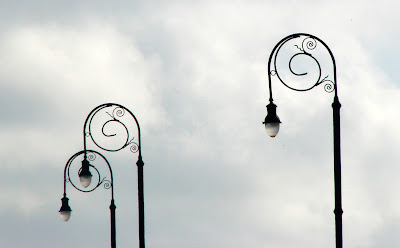 At the end, you come to the harbor. 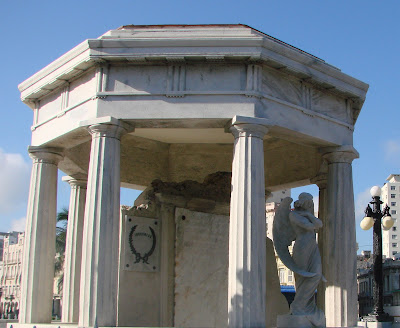 There is a Grecian-style temple, the Monumento de Estudiantes de Medicina, with remains of a firing squad wall. Eight medical students were falsely accused of descreting a loyalist’s tomb and then found innocent. However, loyalist troops took matters into their own hands, held a speedy trial and executed the students here in 1871. 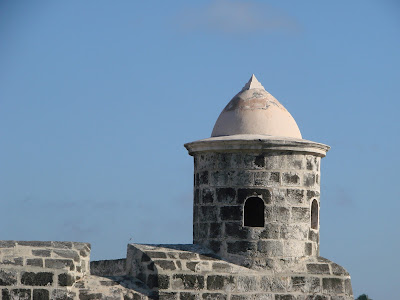 Across the street along the water's edge is the Castillo de San Salvador de la Punta. 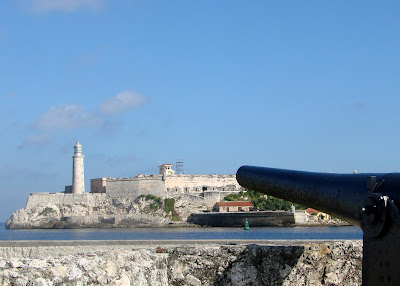 The castle was begun in 1589 and guards the entrance to Havana’s harbor. It was built across the harbor from Morro Castle  so the two sets of cannons could catch invading ships in the cross-fire. 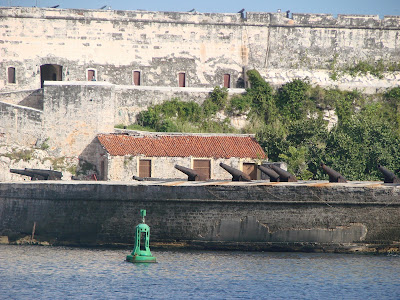 Castillo de los Tres Reyes Magos del Morro was named after one of the three magi in the Bible and was built by the Spanish. 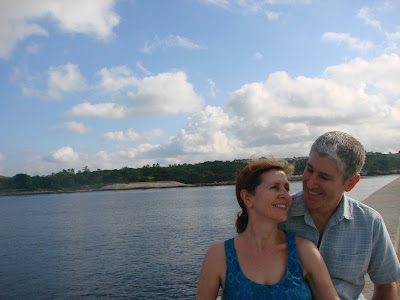 On our side of the harbor was the Malecón, the famous seawall that runs five miles along the ocean front from the mouth of the harbor all the way out to the wealthy neighborhood of Vedado. 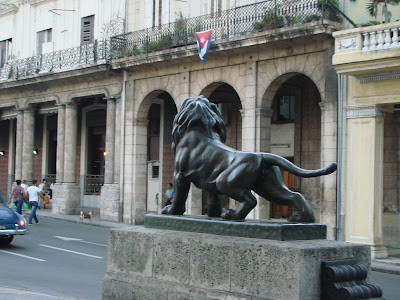 Eventually it was time to make our way back down the Prado. 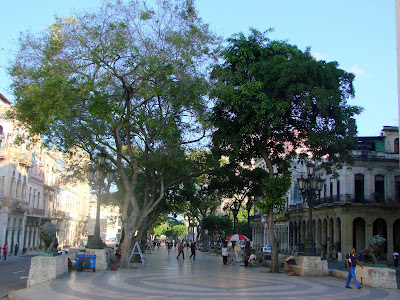 As night approached, the promenade continued to bustle with local people and tourists. 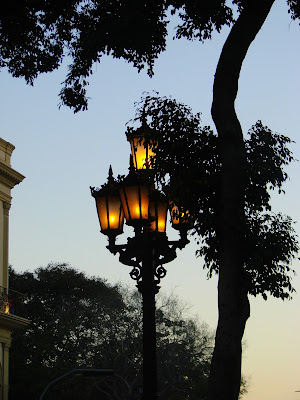 At night, the lamps of the Prado cast a soft light on the promenade. It made for a lovely walk home.
Posted by Secret Agent Woman at 5:35 PM