I've been a little pre-occupied with yard work lately and will take some pictures of blooming plants this weekend. In the meantime, some recent random photos from my phone: 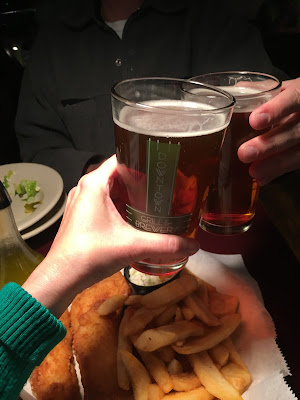 Quite by chance, the younger daughter was sick with the flu on Friday, March 17th, and elected to stay at her mom's house for the night. We made an impromptu decision to get fish and chips downtown to celebrate St. Patrick's Day. We realized as we were sitting there that we've been at that very restaurant the last three St. Patrick's Days (last year with the younger son along) and decided that clearly this needs to be our tradition. 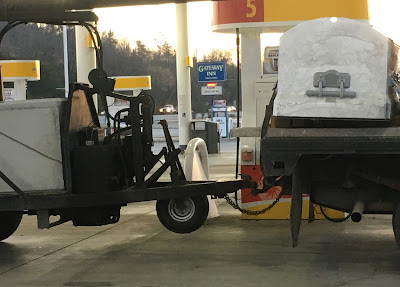 On the way to my office one morning, I stopped at a gas station and saw that next to me was a truck with one burial vault on its bed and another on a trailer behind it. Nothing much to say about that except it's a little creepy. 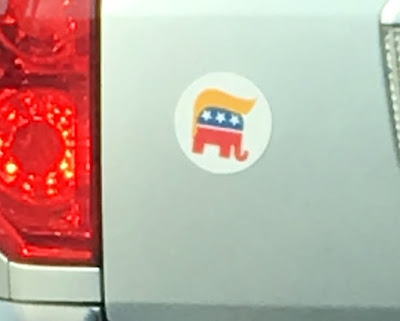 I saw this sticker on the back of an SUV and for the life of me couldn't decide whether the weird yellow hair on the elephant was a sign of admiration or was meant to mock Trump. 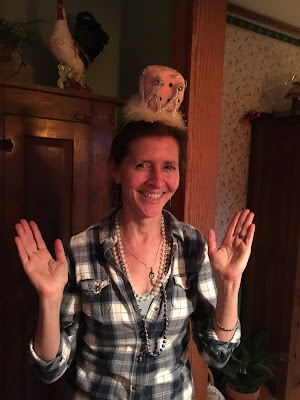 A neighbor asked me to be a sub in her bunco group. That's new for me, but she said if I could roll dice and count to six while drinking cocktails, I'd be fine. As instructed, I showed up with $5 and was handed a bourbon slush when I walked in.  The protocol in that group was that I had to choose beads from a bag and wear them and that whenever I got a bunco (three of a kind in whatever number we were trying for), I had to wear this ridiculous crown until the next bunco was scored. We stopped mid-way for a dinner and dessert break. In the end, I won $10 and had some silly fun in the process. 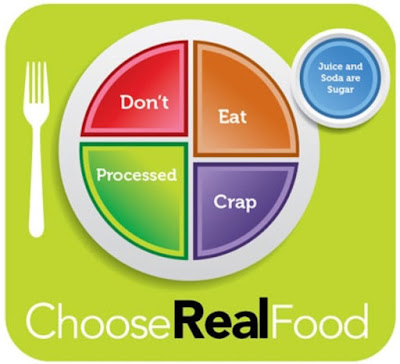 And lastly, in spite of the fish and chips on St. Patrick's Day and the brownies topped with two kinds of ice cream at the bunco party, we've actually made a serious effort to cut way back on carbs and processed foods. In particular, we're eating lots of fish, chicken, and veggies and have leafy greens with dinner every single night. Dessert, when we have it, is usually a single chocolate truffle. I found this modified version of the USDA's ChooseMyPlate image and thought it was as sensible and succinct a guideline as I could hope to find.
Posted by Secret Agent Woman at 5:27 PM