I've noticed a theme in our celebrations - they always involve good food. 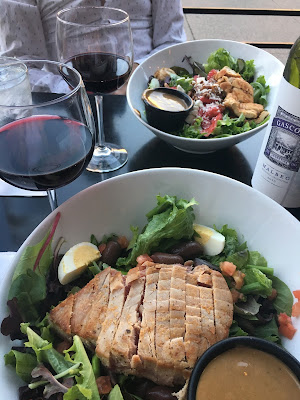 So, my husband wrapped up his externship and started applying for jobs. Starting a new career at 50 is an unsettling thing but I was confidant it would go well. Just one day after he submitted an on-line application for jobs at one of the two companies he was most interested in, he got a call to schedule an interview. They offered him two different jobs and he made plans to accept one of them. In the meantime, the company he'd done his externship for contacted him, as did a third company, and he went back to talk with them. We talked it over and he accepted a position with the medical company where he'd externed. When he let the first company know, they asked if he'd reconsider! But for a variety of reasons, this felt like the best fit and this past Thursday he had his orientation. We met downtown to have dinner outside. After cooling our heels for more than ten minutes, my husband went to track down a waiter. They were apologetic, we were friendly, all was well. We had ahi tuna and chicken salads and a bottle of wine. We were feeling celebratory, it was a gorgeous day, and the delay just wasn't a big deal to us. But the owner of the restaurant thought it was and charged us half-price for the wine and gave us the dinners on the house! Sweet! We left a huge tip. 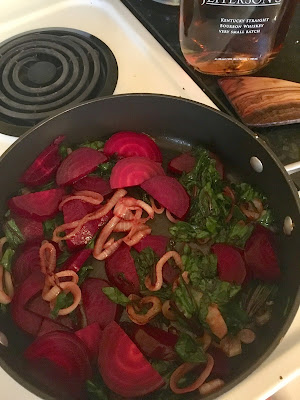 Friday was my husband's first real day of work. It's the same company but a different office, so a new set of providers to get to know. They were happy with him, he enjoyed the day and we both breathed a huge sigh of relief. We had the younger daughter that night, but planned a celebratory meal for the two of us on Saturday. We grilled swordfish with tarragon butter and zucchini with balsamic vinegar and feta. And I made up another side dish - caramelized sweet onions and fresh beets with their greens in a maple-bourbon glaze. 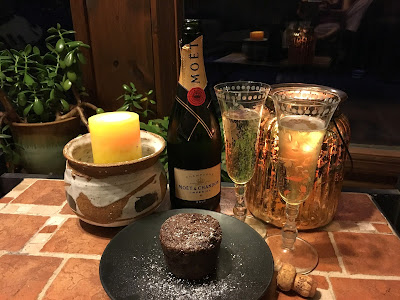 We still have a small stash of wedding cupcakes in the freezer, which have stayed remarkably delicious even after all this time. For the occasion, we had bought a bottle of champagne during the externship with the plan of breaking it out when my husband officially started as a CMA. We cracked it open after dinner and toasted checking off one of the biggest of our financial goals we'd set for 2017 - a job with benefits! I am in private practice, which means expensive, high-deductible insurance and only unpaid time off. My husband's previous employers (and I'm just going to say it, his previous employers were not good people) did not offer anything in the way of paid health insurance or a retirement plan. So this is a big deal for us. I know life is uncertain and anything can turn on a dime, but for now we are celebrating.
Posted by Secret Agent Woman at 5:11 PM