I got news from the oncologist at my appointment that blind-sided me and sent me spinning into a dark place. But I have to first get through this reconstruction and don't even want to talk about it until I'm done with that. As a distraction, I'm posting about my yard: 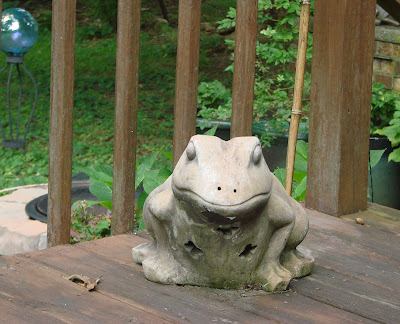 After several hours of happily weeding last weekend, I wandered around taking a few photos. You might have noticed a little frog on my front step in the last post. I have a thing about frogs. Instead of a teddy bear, my transitional object as a child was a stuffed frog. Named Froggie, appropriately enough. So now I have them scattered around. This one's paint has gradually peeled off, but I like the muted color it has become and it lives on the end of our deck out back. 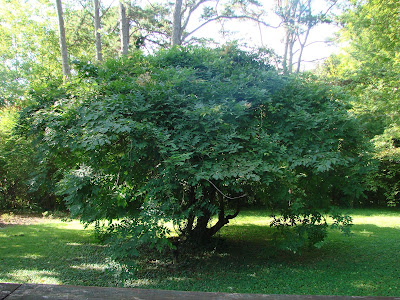 Just off the deck is our dogwisteria, a tree I've posted before. It's an ancient dogwood that has been fully engulfed by an enormous wisteria and ivy. I love that it has vines draping to the ground and is the home of a wide variety of birds. When I first moved in, my ex-husband said, "You should cut that thing down." I said, "What?! Are you out of your mind? That's the best this about this backyard!" I seriously love that vine-draped tree. It has white and purple blooms in the spring and provides an old, mysterious presence to the yard. 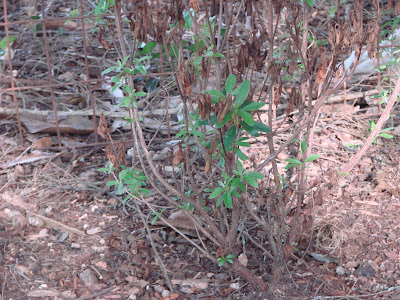 The hemlock garden, dry and shaded, is a bit of a problem child. Hemlocks are thirsty trees and so nothing that can't tolerate both shade and drought can live there. When we were cutting back shrubs last weekend, I asked my husband to cut down the small dead azalea and then noticed a few green leaves on one branch. I told him I wouldn't be replacing it this year anyway, so we'd leave it and see what it does. A week later, it's springing gradually back to life. Nature can be so resilient. 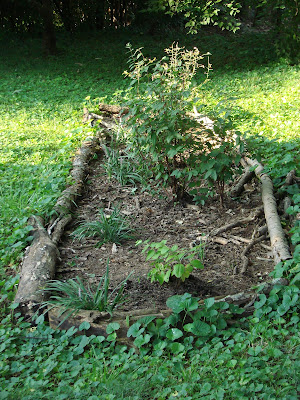 I spent some time this past weekend tackling the blueberry bed, which was over-run with weeds. A few hours and a run-in with a red ant hill later, and I had it all cleared. Small victories are my life these days. 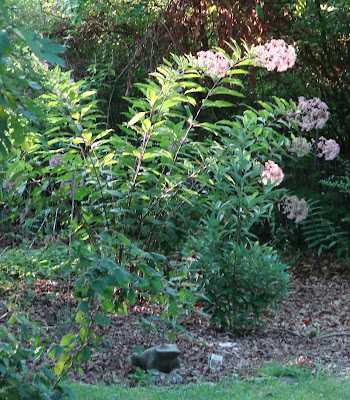 The butterfly garden seems to be doing fine without tending this year and the Joe Pye weed has reached staggering heights. The variety is Baby Joe, which is clearly not true. But butterflies love it so it's welcome to get as tall as it wants. In front is a sizable cement frog named Jermaah. 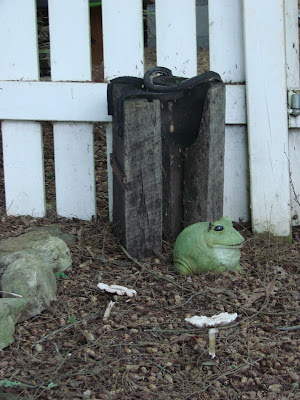 At the gate leading from the back yard to the side yard, another frog stands sentry in front of this strange thing we found at the zinc mines by our old house. It's hinged in two pieces with a funnel shaped carved into the wood and has leather handles. No idea what it is, but I liked it. I also like that mushrooms decided to grow near the frog. 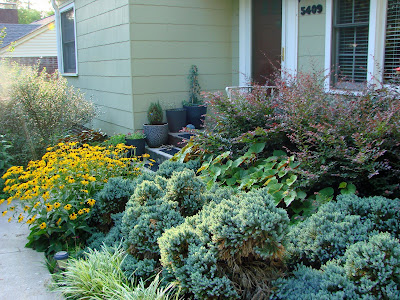 And out front, it's a crazy mishmash of plants. Brown-eyed Susan' that I don't remember planting, overgrown lorapetalum, blue-green bird's nest spruce with variegated lirope in front, and surprise begonia that sprang up out of nowhere in the middle. Somehow it all works together. 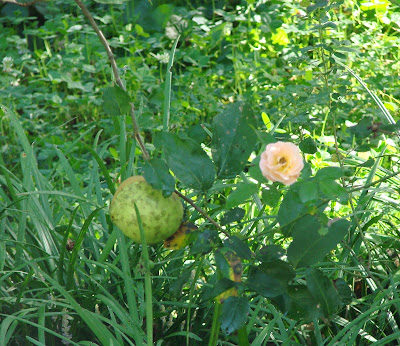 The crabapple I planted two years ago and then transplanted last year has three apples on it! I'm really excited about this. Next year I hope to get enough to make crabapple sauce. 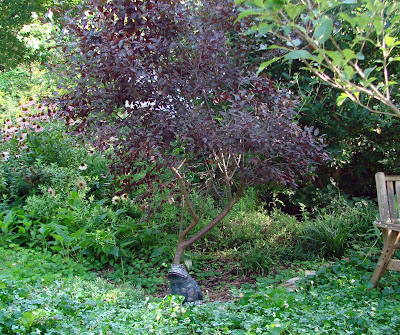 Yet another frog nestled under the purple-leafed sand cherry out front. When I first placed him there in 2014, he was easily visible from the road. Not anymore. He's now the master of his own little kingdom. 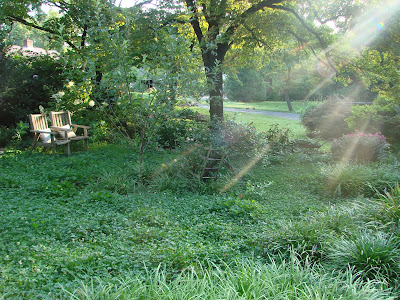 So that's our yard, a lush little jungle oasis surrounded by tailored suburban grass lawns. I don't know what other people think of it, but it brings me joy every time I see it. And right now, I need all the joy I can get.
Posted by Secret Agent Woman at 6:33 PM