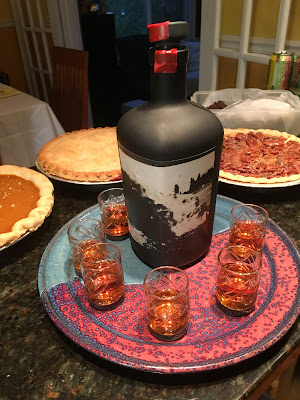 I left my camera alone and just focused on the holiday this year. My brother, sister, and brother-in-law all came up to celebrate with us. No photos of the meal, but we roasted a turkey and had mashed potatoes with giblet gravy, green beans amandine, sweet potatoes with a maple-bourbon glaze, corn pudding, cranberry sauce and my family's odd traditional plate of cucumbers and olives. At the beginning of the meal, my brother-in-law said they were thankful for me and my younger son added, "And I'm thankful you're not dead." I knew what he meant, but it still startled me. 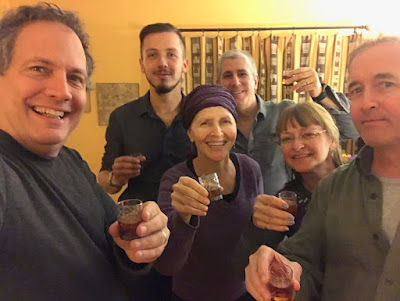 Before dessert (chocolate-bourbon-pecan pie, mixed berry pie, pumpkin pie and brownies), I cracked out a bottle of bourbon I'd been saving. Some time ago, a local package store was having a bourbon event where every day they'd advertise a very limited stock of small batch bourbons and the first people to text in could buy them. They were all pricey and I wasn't interested. Until I got the email about Burning Chair bourbon from the Savage and Cooke distillery on Mare Island, CA. Run by a former Napa Valley winemaker, the bourbon is finished in old wine barrels. I texted immediately. Because Mare Island is a decommissioned Naval base where I lived for three years as a kid. Having the two siblings with me who also lived on Mare Island made it the perfect time to break it out for a toast. To Mare Island memories, to my Dad who died almost a year ago, to family. And to giving thanks. I was thankful for all those things and for the people who I love and who love me. And you know what? I'm thankful I'm not dead, too.
Posted by Secret Agent Woman at 4:12 PM