Update on my left foot. 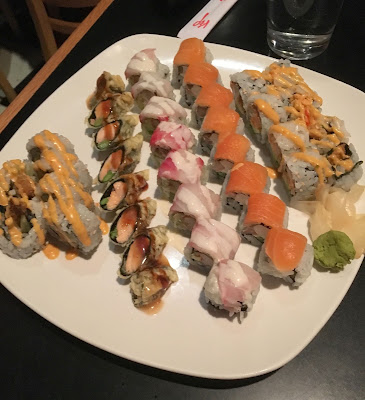 The night before surgery, we went out for sushi. I'd abstained for the duration of chemo, because it's not safe while your immune system is compromised, and I figured 27 days out was close enough to a month. And then went home to my list of instructions that I could recite by heart after four surgeries in the last six months - no food or drink after midnight, shower the night before and the morning of with antibacterial soap, no make-up, lotion, nail polish, deodorant, or jewelry, no NSAIDS for five days prior. 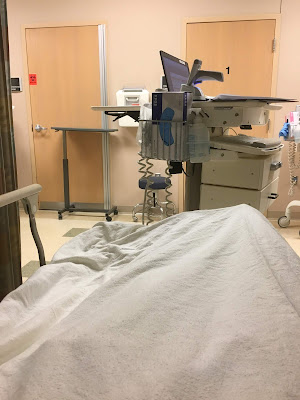 This time I was able to use my port for the anesthesia. As I watched the nurse unwrap the supplies, I casually/not-casually-at-all asked if accessing a port was more difficult than starting a regular IV. She said it wasn't if you'd done it before. I said I assumed she had and she nodded, then noticed the alarmed look on my face and assured me she used to work in oncology and had done many, many ports. Whew! Then the parade of people who stop in your bay to check in with you - the anesthesiology resident, the surgical nurse, the head anesthesiologist, the surgeon (who said she expected the surgery to take only about 30 minutes). All friendly and kind and seemingly in no hurry at all. The anesthesiologist asked about my chemo and then fist-bumped me when I said I'd finished. He asked if I was warm enough and offered to get another blanket. While he was tucking the warm blanket around me (something I've only ever had nurses do in pre-op), he said, "We want to take extra special care of you because you're a survivor." Made me tear up. He told me I would be under medium sedation and promised I'd remember nothing. In fact, it's a blank from the time they were strapping my arms down until I woke up in recovery. 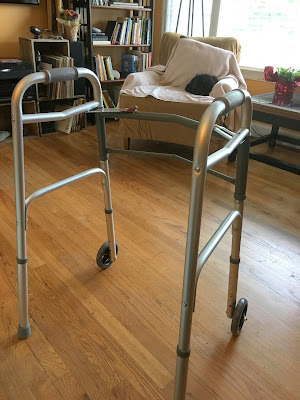 The podiatrist briefed my husband afterwards while I was still out. The surgery took an hour because nothing goes quite how it's supposed to for me on this cancer journey. Turns out the calcified whatever-the-hell-it-is (pathology report pending) had grown in a weird oblong shape around the back of my ankle and attached itself to my tibia bone. The surgery order had called it a "lesion of unknown behavior" and I guess they were right - that sneaky end run around my ankle was not anticipated and they had to remove some of the bone to get it out. It was putting firm pressure on a nerve and the surgeon said between manipulating the nerve and shaving off some bone, I'd be in pretty serious pain for a few days. Once again, yay me! Incidentally, I texted this information to my older son who immediately wrote back, "It's going tibia long recovery process."

So that ridiculously useless walker they sent home with me after my mastectomy is now my best friend. I've already become pretty adept at hopping with it, in spite of the post-chemo leaden thigh that's having to support me. I took the Percocet as prescribed and discovered that I have not magically become able to tolerate narcotics. I woke up Saturday morning with a migraine and broke a walker-assisted land speed record getting to the bathroom before I got sick. It's ibuprofen from here on out, which means I am learning to tolerate the throbbing pain that happens whenever I get up. But it's not often - I was told no pressure on my foot and that I was allowed to be up no more than five minutes out of any hour for a full week! 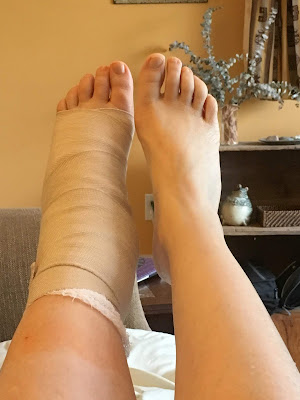 I go back for a follow-up on Friday (stitches out the following week) and was told not to unwrap my ankle before then. So I am doing as I'm told - reclining all freaking day long with my betadine-swabbed and wrapped leg and foot elevated. And I'm not happy about it. I'm a caretaker type and it just goes against the grain to be so utterly dependent. Even with my mastectomy, at least I could walk. But I don't want to screw up what was fixed, so I'm begrudgingly compliant. I'm napping, and reading, and watching movies, and breathing. Lots and lots of breathing.
Posted by Secret Agent Woman at 1:01 PM