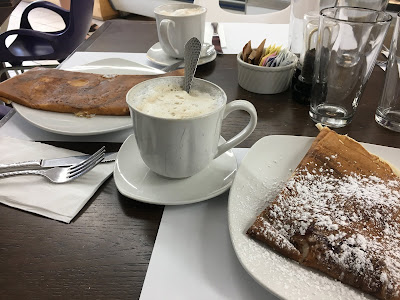 Friday morning we slept in a bit and then went to a little bistro I'd read about. The owner, Michel, specializes in crepes and a lovely French accent. We had an egg and gruyère cheese crêpe and a strawberry crêpe, and cappucinos. There's a regular group of local guys who apparently hang out there in ball caps and flannel shirts, eating crêpes and croissants, talking about hot rods, and catching up with Michel. I wouldn't have expected that, but it was great to see. 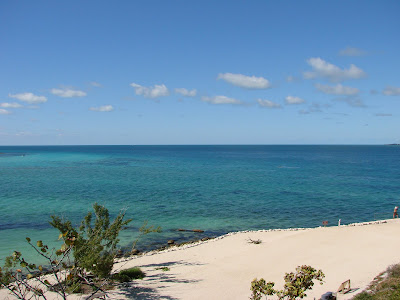 We drove on down to the lower Keys to be able to see both coasts along the A1A highway. The Keys don't have much in the way of traditional sandy beaches, but we did find a few places to get out and walk. Our farthest point was Bahia Honda State Park. 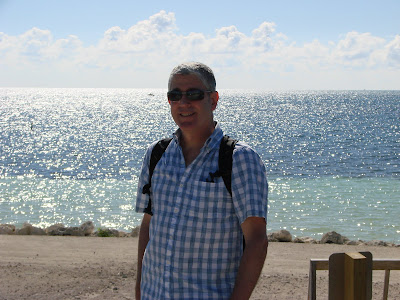 It was another glorious day - so sunny the sea looked like cut glass. 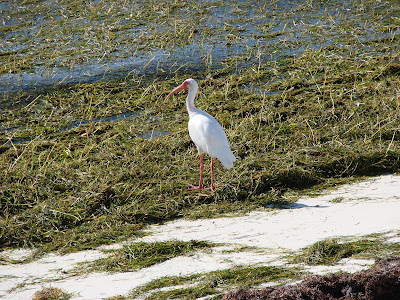 We encountered ibises everywhere, both on the beaches and in parking lots. 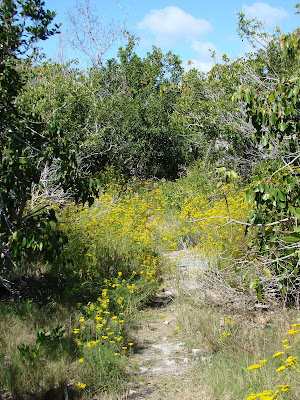 We walked a couple of paths in the hiked National Key Deer Refuge but never saw the diminutive, endangered Key deer except crossing the road as we drove on Big Pine Key. It was an interesting place to walk, but unshaded and pretty hot. 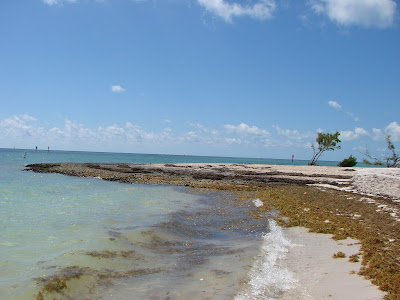 So back up along the coast to the Middle Keys. We stopped at Sombrero Beach on Marathon Key. 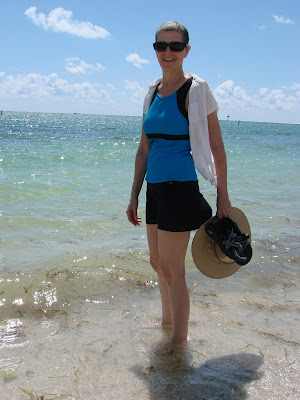 The water isn't warm enough yet for swimming (for me, anyway - I like my oceans bathwater warm),  but I did wade in. 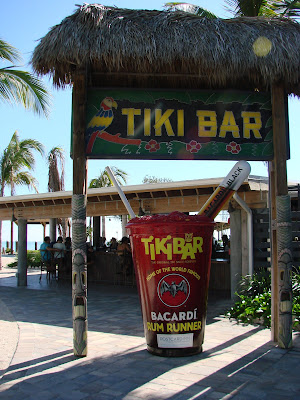 The friends we met up with in South Beach had gone to the Postcard Inn's open air Tiki Bar known for signed dollar bills tacked up on the rafters. I was given a bill with their message ("You lose, breast cancer.") and was told we needed to go back for a drink and have their bill posted with ours. Done. 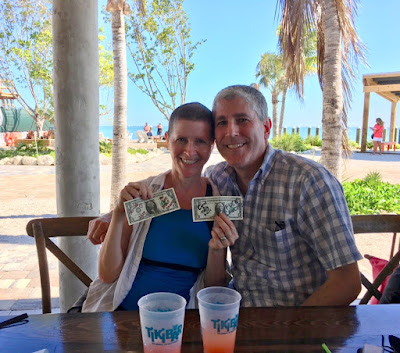 After we'd ordered rum cocktails, we told the bartender our plan and asked if curse words were acceptable. She had been a little distant prior to that question but when we asked she said, "Yes, and I agree - fuck cancer!" And took our picture with the dollars before taking them to staple up. I can't predict when it will hit me, but as I raised my glass to toast the end of active treatment, I found myself choked up. It's been quite a ride. 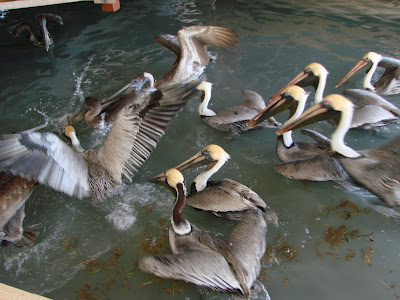 As we left the bar, someone was cleaning fish and throwing the leftover bits to the pelicans, who had flown in, eager for lunch.
Swimming under the pelicans, enormous fish (tarpon?) also snapped up what they could get to first. 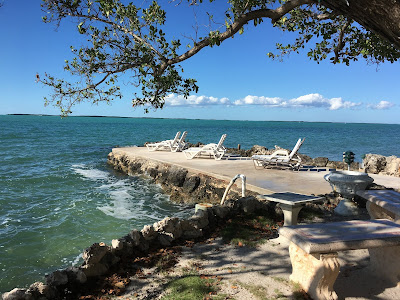 Our airbnb provided kayaks, so we decided to try them out that afternoon. We opted for the tandem kayak so we could go together. And let's face it, I'm still rebuilding upper body strength. 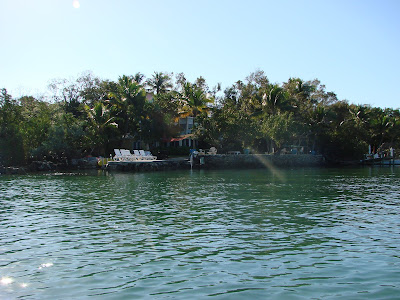 We just paddled in either direction for a while, watching the fish under us and enjoying the breeze. 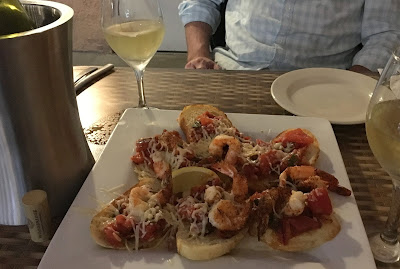 Friday night my husband had his heart set on lobster, so we headed to Hobo's Café, a restaurant we'd read about that had outdoor seating. We had shrimp bruschetta to start and a bottle of chardonnay. 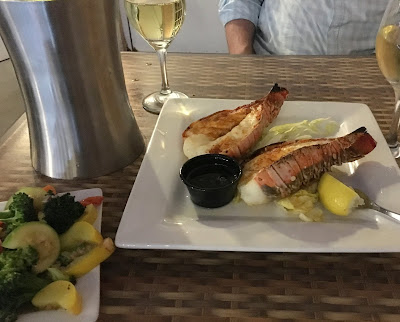 And then lobster tails and mixed vegetables. All delicious and I realized I was missing veggies while on the trip! My tastes have really changed. 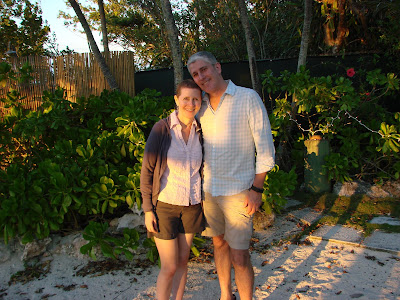 We had dinner early so we could be back in time for sunset. The airbnb owner had told us the sunsets were really beautiful on their dock and she was right. 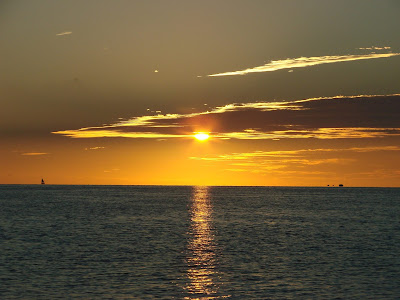 We sat for a long time, watching the sun slowly sink over the bay. 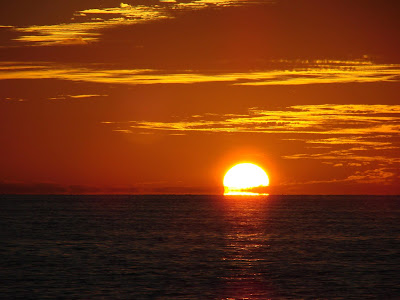 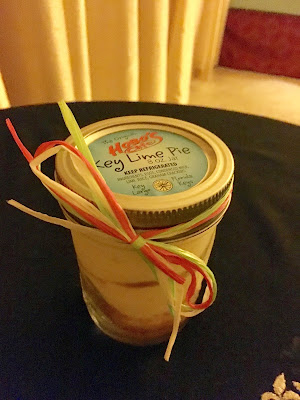 Our waitress that night had asked what brought us to Florida so we told her it was to celebrate the end of chemo. As we left, she brought us this key lime pie in a jar and congratulated me. 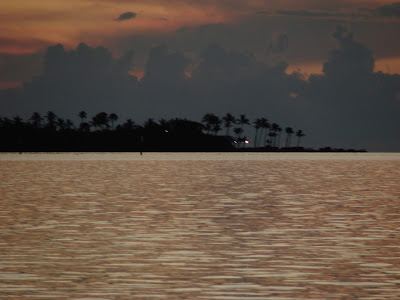 After sunset, we had a glass of wine out by the water as the skies darkened.
Posted by Secret Agent Woman at 5:12 PM