So we had a perfect plan - drive to Nashville after work Thursday, spend the night at a cheap motel near the airport, fly out at dawn to Miami, and then another flight to arrive in Kingston, Jamaica a little after noon on Friday, pick up our rental car, head up north to a place we'd rented in the Blue Mountains, and fly back home mid-day Monday. We all know what happens to perfect plans. 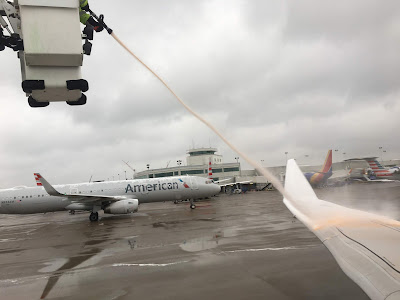 I got up in the middle of the night to try to adjust the heater to make the fan block out some of the noise at the God-awful cheap motel, and saw a text letting me know our flights had been canceled due to snow. They offered to give us flights that would get us there either Saturday night or Sunday night. No. So after more than an hour on hold and being disconnected, we got through to the airline and they finally arranged for us to fly that morning to LaGuardia, then back down to Miami, and THEN to Jamaica, arriving that night. It was our only viable option, so we took it, and I scrambled to make a new reservation near Kingston for the first night. We sat on the tarmac for a quite a while while they de-iced the plane, but fortunately our connecting flight was held for us. On our flight from Miami, the first class section just a few rows ahead was occupied by Jamaica's Prime Minister and his security detail. 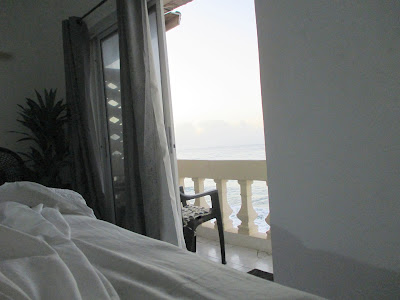 After a hairy wrong turn into a bustling and not-particularly friendly neighborhood in Kingston and a close-call with an angry driver, we got to the place I'd rented for the night in Bull's Bay. And it was amazing. The ocean was literally a few feet from our balcony.
We left the balcony door wide open all night to hear the ocean. I can't remember when I've slept that soundly. 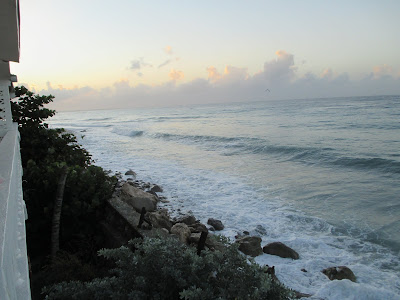 We had a glass of wine on the balcony before bed and sat for a while with a cup of hot tea in the morning, just watching the waves and the pelicans. 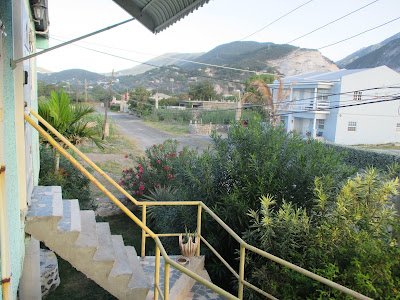 Leaving the airbnb in the morning, we drove north along the coast. I say "we," but I didn't drive. My job was to help navigate and to offer periodic reminders to "stay left!" 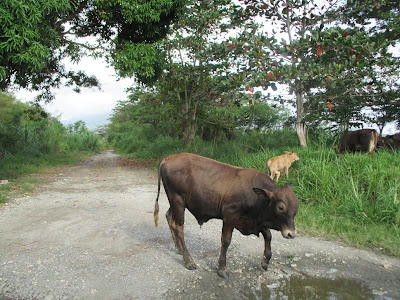 The roads were often insanely rutted and narrow, and animals wandered freely. Cows, chickens, goats, dogs. People walk in the road a lot, too. Couple that with extremely aggressive drivers and you have an adventurous ride. 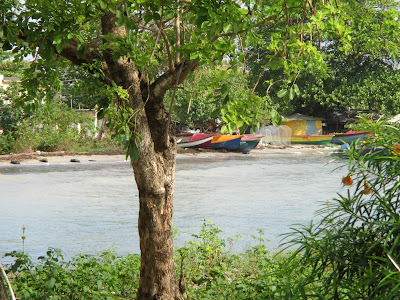 But what a beautiful place! And we got perfect weather the whole time, with highs in the mid-80's. 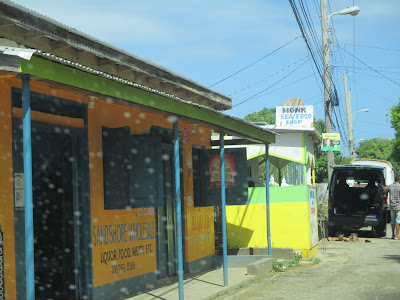 We stopped in Manchioneal around 10am for breakfast. I saw a bartender and people drinking in Monk's Seafood Shop as we passed, so we turned around and went in to see if there was food available. The bartender cracked open a couple of beers for us while the cook threw two snapper into the oil. 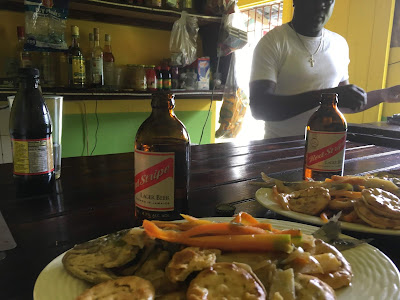 A whole fish, vegetables, and crackers soaked in the sauce. I ate every bite of mine. As we ate, we talked with some of the local people who wandered in out of curiosity, to smoke, have a drink, and chat with us. I got the impression that this was not a place tourists ever stopped in. One guy, who identified himself as the Chief of the town, was knocking back glasses of gold rum and a local energy drink  mixed with a shot of overproof. He probably shook our hands three dozen times. And then suggested that it was the custom to pay homage to the Chief with a tip. I don't believe that for a minute, but he was happy with the $100 Jamaican note (about 71 cents), which went toward another drink. 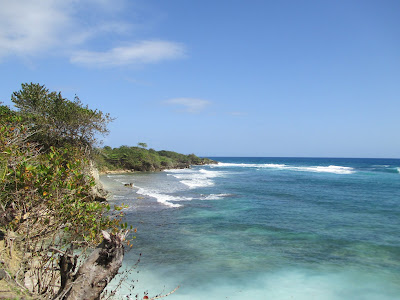 The drive wound its way in and out of tiny communities and along the shore. 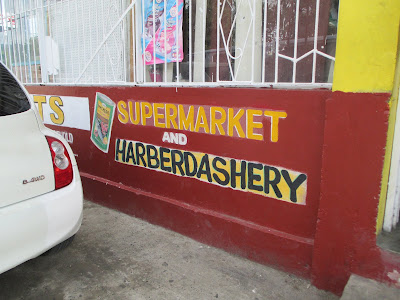 Later in the drive, we stopped in another small town,  at this wonderfully-named grocery store. 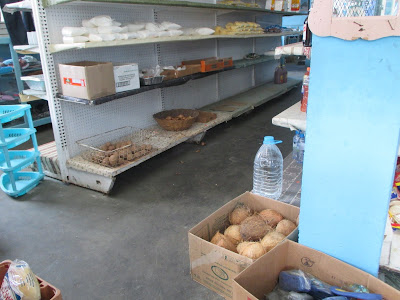 We picked up a couple of beers and some crackers to have for snacks. 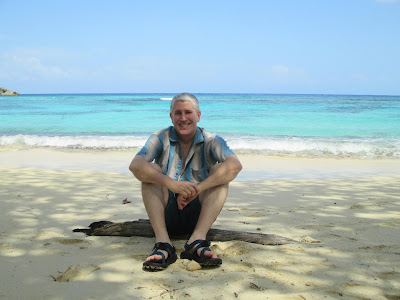 When we got to Portland, we went to Winnifred Beach, one of the few free beaches. 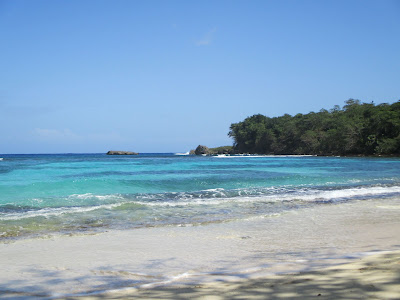 It was quiet and everyone was friendly, and I could have stayed for weeks. 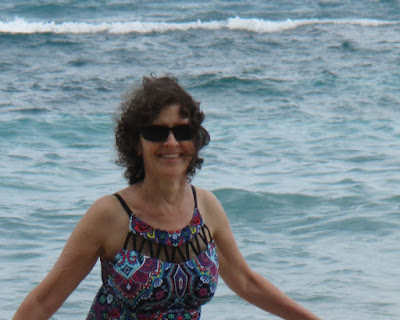 The water was a little cool so I didn't do more than wade in. 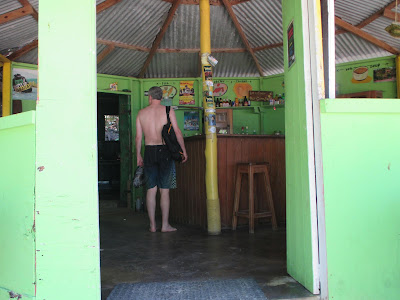 There were several little restaurant/bars and my husband went in to this one to get us rum drinks and ask about the food. The cook, Cynthia, told us she'd be getting lobster in the next day and would save a good one for us. 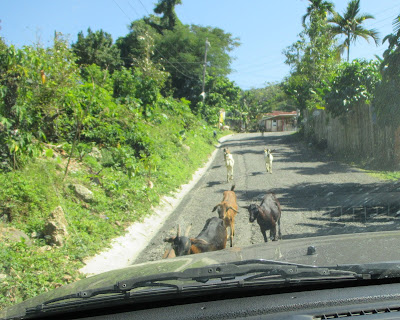 Then back on the road to Port Antonio. This time the road hazard was a herd of goats. 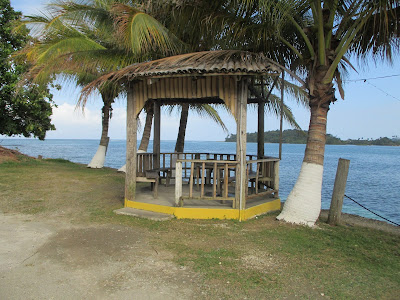 We ate at this little place right by the road that went to our lodging. 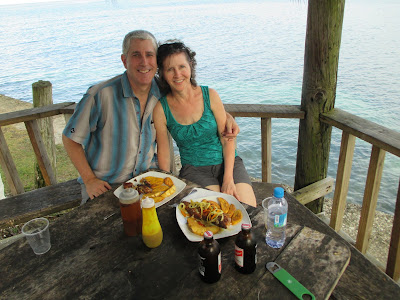 The area specializes in jerk, so we had jerk fish and jerk chicken, both with fried plantains and breadfruit. Another really good meal, and the cook came out to talk with us. He had told some regular guests that we were friends of his, and one of them bought us a second round of Red Stripes. It had been a long couple of days and we were glad to head on to our Airbnb  in the mountains that evening.
Posted by Secret Agent Woman at 1:17 PM