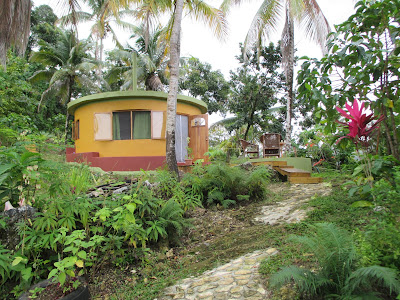 This was our place in the Blue Mountains. We had a hell of a time finding it. The owner is not a local and was a lovely person but exceedingly vague about directions. And not a fan of punctuation. Our directions:
If you reach Port Antonio Stony Hill Road pass the small river and come all the way up until you see a watertank and signs about waterprojekt on your right side also a shop. Desi Shop. Go there. If you park by the shop, pass the Shop and come the way down.....you will see it by your left side.

I finally called in despair and she told us to look for the car wash. Many more trips up and down the road until we noticed men washing cars in a creek that ran along the side of the road. We forded the creek and finally found our way. We were thankful for the 4WD car we'd rented - the road through the mountains was crazy. 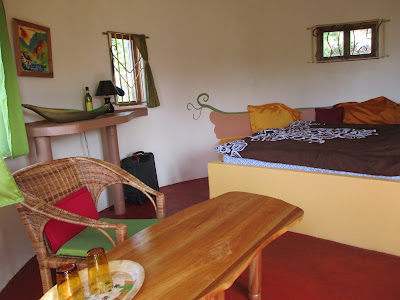 The owner is basically a hippie who wanted away from the gray skies of Germany and planted herself in a little spot of paradise. She designed her house and this little guest house herself, making sure to work around existing trees. 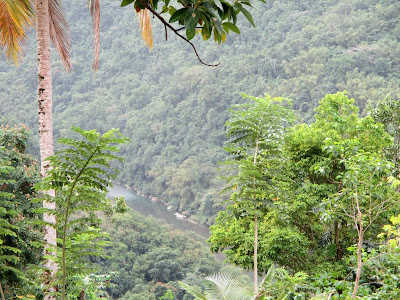 On one side, we overlooked the Rio Grande River 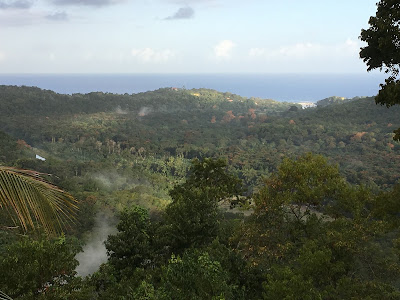 and on the other side, we could see (and hear) the Caribbean sea in the distance. 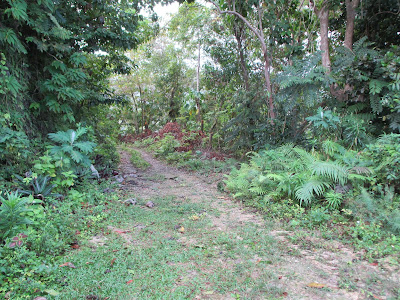 In the morning before breakfast, we took a walk along the road below the house. 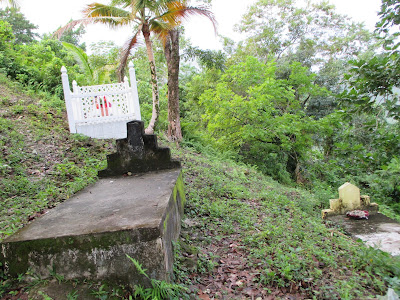 We found an interesting little graveyard and a cookhouse. 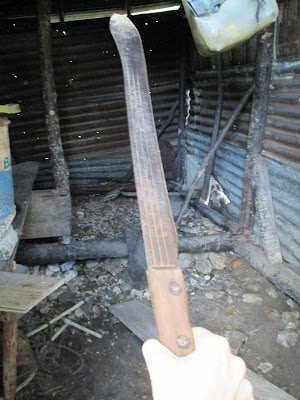 We both assumed it was abandoned and didn't know until later that we were actually trespassing on someone's private property. Our host told us she'd kept an eye out in case the owners came along. They did, in fact, while we were eating breakfast, so we waved and wished them a good morning. Oops. 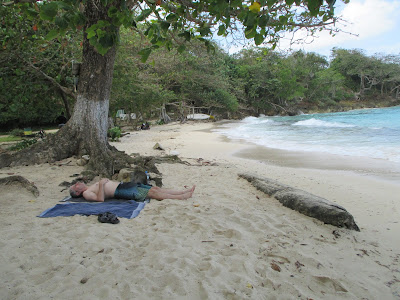 With just one full day left, we decided to spend it lazing in the shade back at Winnifred Beach. Give me leafy branches overhead, the sound of waves and an ocean breeze and I lapse into a blissful coma every time. 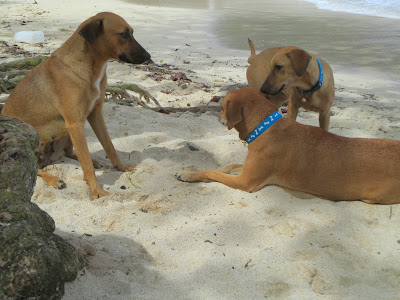 The beach was loaded with friendly dogs. This set seemed to be deep in conversation. We named them Winnie, Ackee and Bammy (for the beach, and two Jamacain foods). 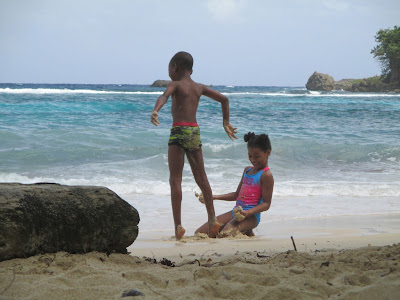 It was a family beach with only a handful of non-locals. I was enjoying watching these kids playing in the sand. 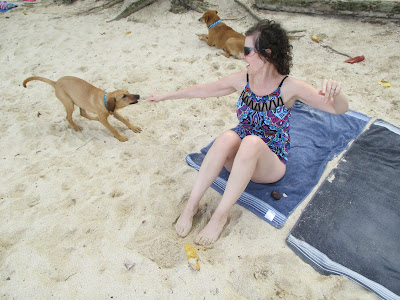 One of the little dogs brought a knotted rope for a game of tug of war with me. Earlier, she and another dog had been wrestling with it. 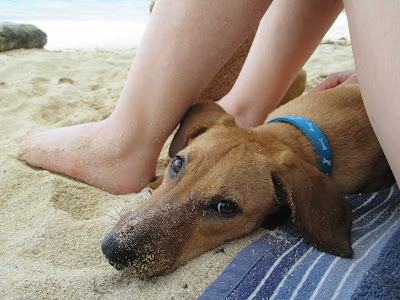 Finally the pup we called Ackee curled up under my legs for a nap. I know she belonged to someone and was clearly well cared for, but I so wanted to smuggle her home. 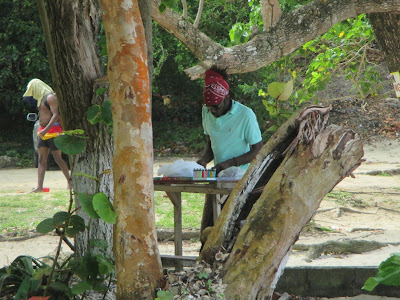 This guy had a table under the trees selling lighters and ganja. When my husband asked what he was selling, he answered, "Whatever you're smoking." 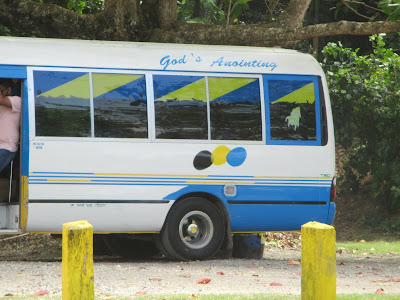 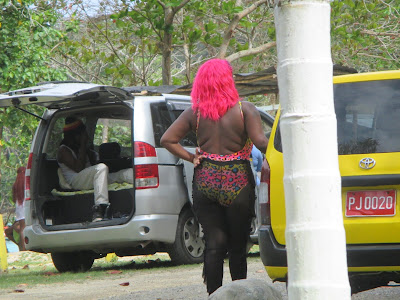 Women in unusual clothes and men (in normal clothes) were in and out of it for a couple of hours. Draw your own conclusions. 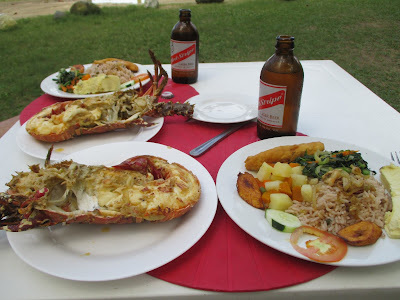 True to her word, Cynthia had saved us a sizable lobster. We had it split, with rice, vegetables, callaloo (greens), plantains and fried dumplings. And of course, Red Stripes. 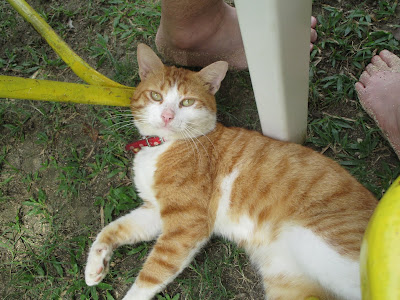 This cat was so eager she nearly took my hand off when I gave her a small piece of lobster. 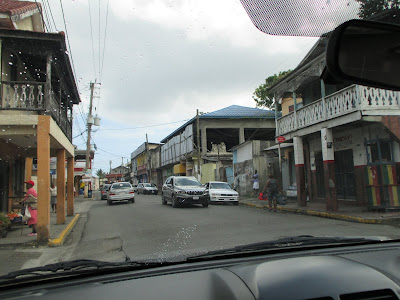 Finally it was time to head back through Port Antonio. We stopped again at a little store for more snacks. 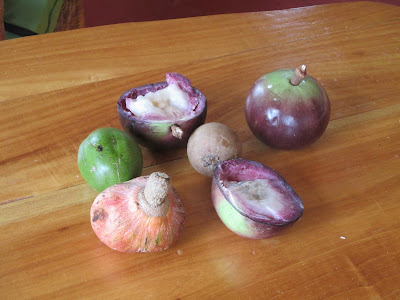 And at a fruit stand on the side of the road, where the owner insisted on taking his machete and slicing open different fruits for us to try. We came home with a couple of Star apples, a nase berry, a Jew plum, and a fruit I never could find the real name of that the fruit stand guy called "Jamaican ice cream." Except for that plum thing, which was hard as a rock, they were all delicious. 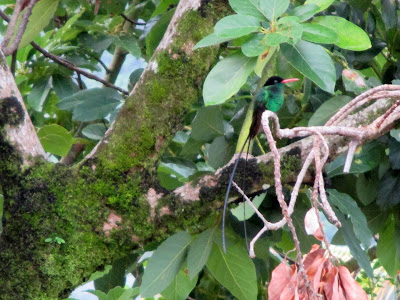 We spent a fair amount of time watching the gorgeous streamertail hummingbirds while we were there. We liked them so much that when a guy on the beach came by with bamboo cups he had carved, we bought one with a streamertail on it.
The hummingbirds apparently use those long tails to attract mates. 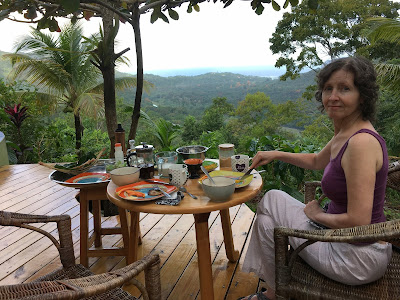 Both mornings our host made us a wonderful breakfast, which we ate on the deck. Banana fritters, museli with local honey and almond milk, slices of papaya, toast and jam, and Blue Mountain Coffee. 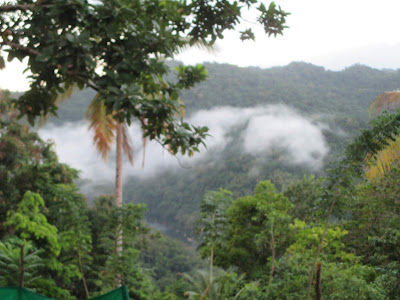 Again, it was hard to tear ourselves away. We bought a couple of bags of the coffee which the owner said she buys from a friend of hers, and got a far better deal than we would have in a store. 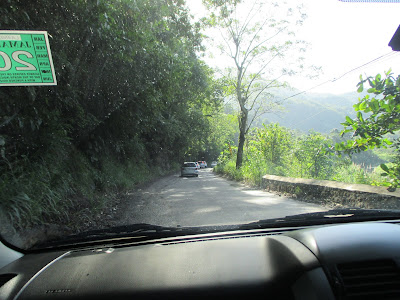 Back along the narrow, winding roads, we took a different route to the airport. We made it in plenty of time to stop at the duty-free store and buy a bottle rum to bring home with us as a reminder of a trip that had an inauspicious beginning but turned out to be wonderful.
Posted by Secret Agent Woman at 9:18 AM