Apparently I'm some sort of mutant. 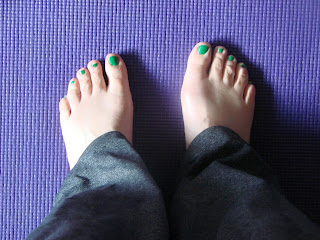 So I'm four weeks into a six week intro yoga class. I let my instructor know on the first day that I have carpal tunnel issues and needed modifications for anything that normally calls for pressure on the wrists. No downward dog for me, I do a dolphin pose. Planks on my forearms rather than my hands. And so on. I'm working on it, learning to balance, strengthening my pitiful core muscles. And anything that involves my super tight hamstrings, I have problems with. But I hope to improve that, too. However, other things seem to be easier for me. I became aware of that when we did the child's pose, which basically involves kneeling and then lying over your thighs with your arms stretched out ahead of you on the floor. As our instructor talked about breathing and deepening into the pose, I got confused. I looked around to see some people had space between their rears and their legs.  Me, I was like a rag doll, fully collapsed onto my legs, face on the floor. I could sleep like that. 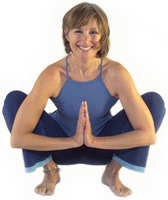 But I realized I was constructed differently than most people when we learned this (image found on the web) - the malasana or garland pose.  It is basically a squat with your heels flat on the floor and hip-width apart, toes pointing out on a diagonal. You bring your torso forward to press your arms against the inside of your knees, with your hands in a prayer position.  The idea is to have your chest open and back straight. Go ahead, try it. I did, and then looked around the room. After trying a couple of adjustments, I said, "Um... is my butt supposed to be touching the floor? I don't think I'm doing this right." The instructor suggested I open my chest more to make sure my back wasn't rounded. Done. Butt still touching the floor. Now everyone was looking at me from their own squat. One woman says, "You know, I think you're longer here (gesturing from hip to knee) compared to here (knee to ankle) than everyone else." The instructor leaned forward to study me saying, "Oh, interesting. That's really interesting." While the rest of the class nodded. I said, "Okay, good to know I'm a freak of nature.  Moving on."
Posted by Secret Agent Woman at 5:58 PM