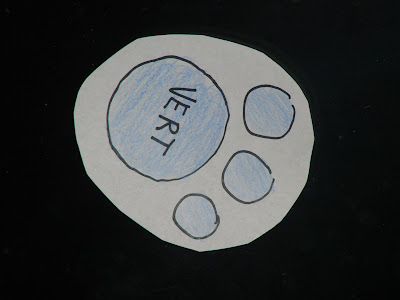 I've had my younger son more than normal the last couple of weeks - both because his father is off on vacation and because he and a friend of his had a French class project and met at my house several days in a row. While others in the class were doing power point projects, he and his friend elected to make a video of Blue's Clues in French.  robably only the parents of children of a certain age will know what I'm talking about. As it turned out, the writing, staging, filming and editing took many hours. My son played Pierre (their version of Steve) and his friend was Bleu, an adorable cat version of Blue. The film started with them waking up and progressed through a day involving a search for a spoon. 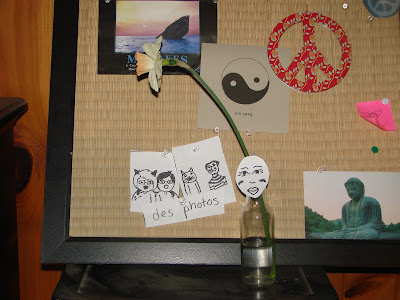 Objects gained little paper faces and became animate, and my house was re-arranged a bit to suit their show.  On the board above, they put up drawn "photos" of the pair of them, two tall, lanky kids, the girl with a pair of cat's ears.  I stayed in the background, tried to be quiet during filming, provided pizzas, and thoroughly enjoyed listening to the two of them laughing and talking. When it was over, they included a bloopers section they titled "Bluz Cluz," starting with the wake up scene, where my son sat up in bed, and then collapsed in giggles at the site of his friend perched next to him waiting to be petted.  I've watched it through a couple of times, and can't imagine it wasn't at least the most entertaining project in the class. 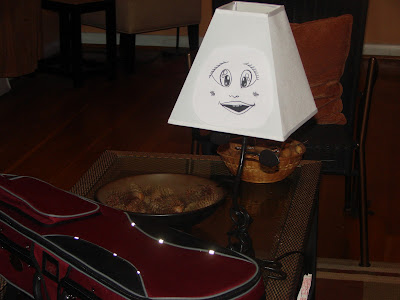 I keep finding the little remainders of the show. Like this lamp that I had to de-face and return to my room.  The salt and pepper shakers, though, still wear their little smiles. And a word about that violin: My younger son bought himself a violin back in November and is teaching himself to play. Mostly his Irish songs. But the other day I heard him playing Pachelbel's Canon and when I went into the living room, I asked where the music was and he tapped the bow to his temple. I asked him how he'd learned the song without sheet music and he said, "Well, I've heard the song before so I know how it goes." The whole playing by ear that my kids have is alien to me.
Posted by Secret Agent Woman at 3:50 PM