On to the kitchen... 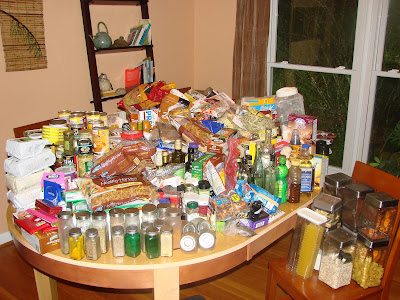 The first step was taking every item of food from the pantry and cupboards and putting it on the dining room table. Frightening, isn't it? My sons tell me I'm a food hoarder. And I can't argue very convincingly. As far back as I can remember, I have had a dread of running out of food or money. But the part that is not hoarder-like is that I'll happily use the food.  In fact, even if I only have a single dinner guest, I cook as if I'm feeding a crowd. Because, by God, NO ONE will go hungry at my table! But the stocking up is at a point where I wasn't even sure what I had since I tend to just unload groceries without any real organization. And it doesn't help that my kids also go to the grocery store and pile their stuff in, too.

I also emptied out the fridge and freezer onto the kitchen counters. Actually, there's a smaller fridge in the basement where I keep sodas for the kids, beer, and bags of flour because of the pantry moth problem. I brought everything from that freezer up, too. And after I sorted, I did some counting. Seven pounds of shrimp in the freezers. Seven. Pounds. And those little vegetarian sausages my son loves? We call them notsages, and I counted 89 of them. You read them right. Throw in some corn and potatoes and I've got a low country boil. Also half a dozen salmon fillets, maybe ten swai fillets, and four other kinds of seafood. Eight quart bags of tomato/veggie sauce I made last summer. And several frozen loaves of bread. I'm officially on a grocery embargo. The only exceptions being things like milk, eggs and produce. But I will be cooking my way through the food on hand, especially emptying out the freezer. I suspect I'll always keep an abundance of food around, but the organization/moderation part is a work in progress.
Posted by Secret Agent Woman at 7:51 AM