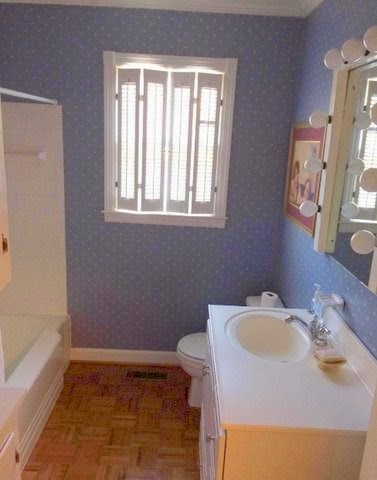 This little house has only one bathroom. When I bought it, it looked like this. Judging by the wallpaper, I assume it to be a 1980's update. Note the odd home-made light fixture, a sort of low-budget Hollywood starlet's dressing room look. Also the tp on the back of the toilet? No holder for it, no towel rod, nothing like that. You can't really see it in the photo, but the cabinets on the left had old-fashioned doors with external brass hinges and ceramic knobs. Since the entire bathroom was painted pink at one point, bits of pink were showing through the woodwork. 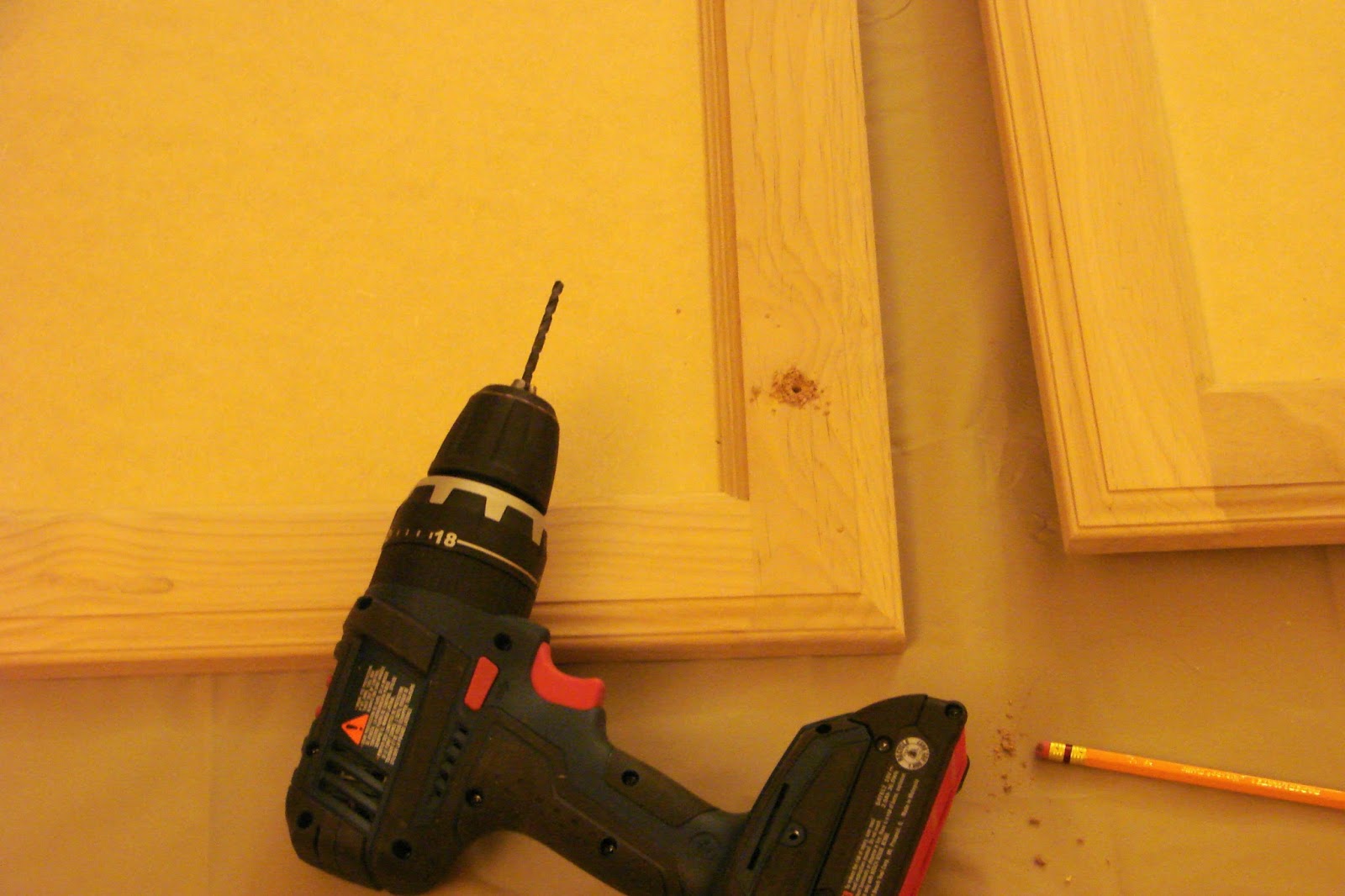 Therefore, it's one of the projects that has occupied my time. I had been considering using a cabinet company that allows you to buy unfinished cabinets or cabinet doors on-line and paint and install them yourself. But I hated to jump in with something as big as a kitchen. To test them out I ordered four doors for the bathroom cabinet. You send measurements (to the 1/16th of an inch) and choose the style of door and hinges. I picked a style that mirrored the woodwork of the doors in this house. When they arrived, I drilled holes for the knobs I'd bought and painted them with three coats of white paint. 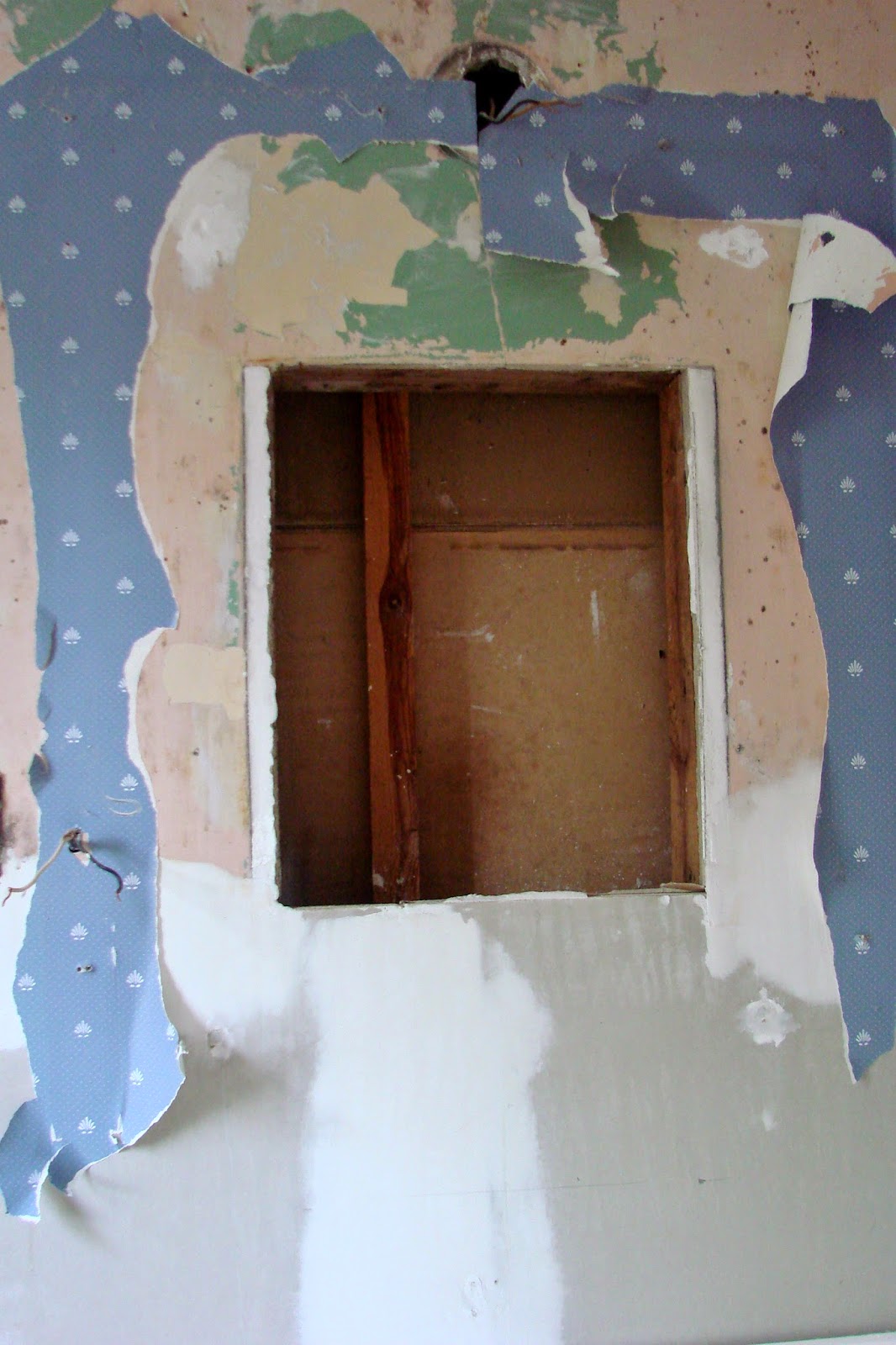 I hate dealing with wall paper. And worse, behind it I found the upper portions of the walls riddled with mold. I scrubbed the walls with bleach twice and put on a couple of coats of a primer that claims to be mold/mildew resistant. I also discovered that the weird mirror/light covered the opening for an older medicine chest. 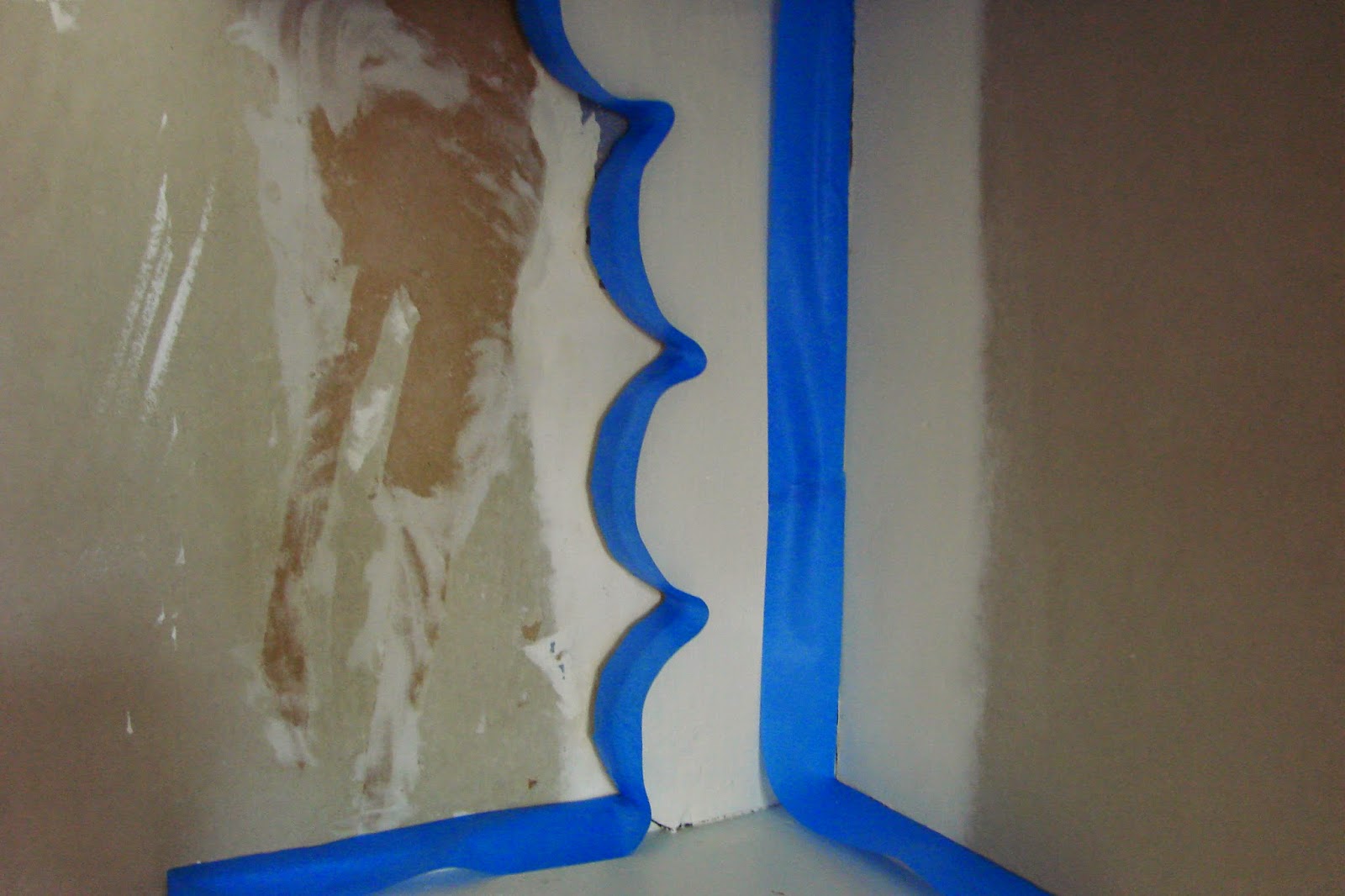 Taping off the woodwork on the cabinet was a little challenging. And then taping the walls later so I could re-paint all the woodwork. 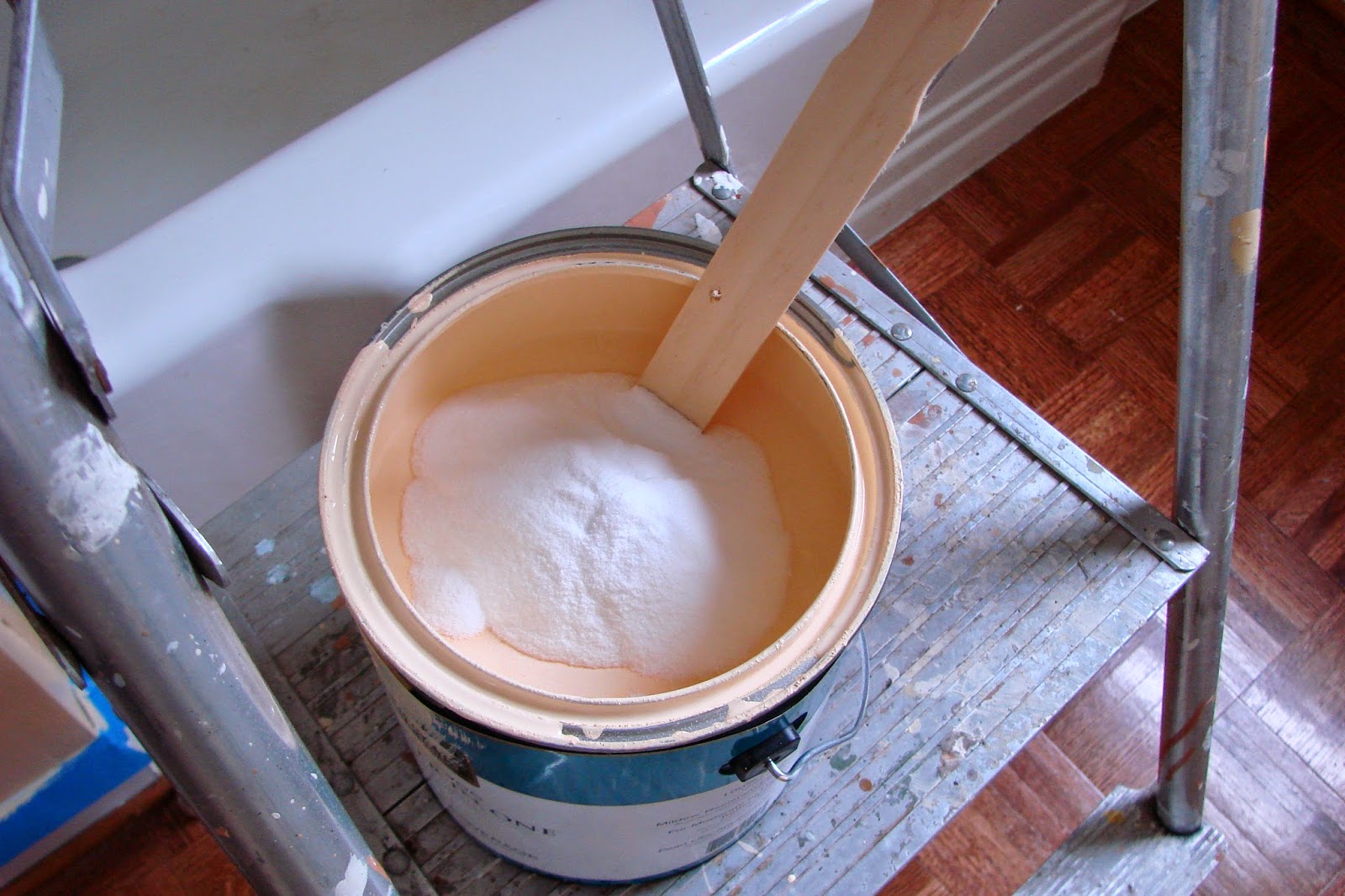 Because the walls were so damaged, I mixed in silica sand for a grainy texture to provide some camouflage. The paint I'd chosen, "Fresh Praline," looked like a nice warm brown. Looked like that on the sample, anyway. I painted a swatch on the wall and realized it was actually a color somewhere in between Dijon mustard and poop. Nope. I went back to the store and picked out this lighter color. 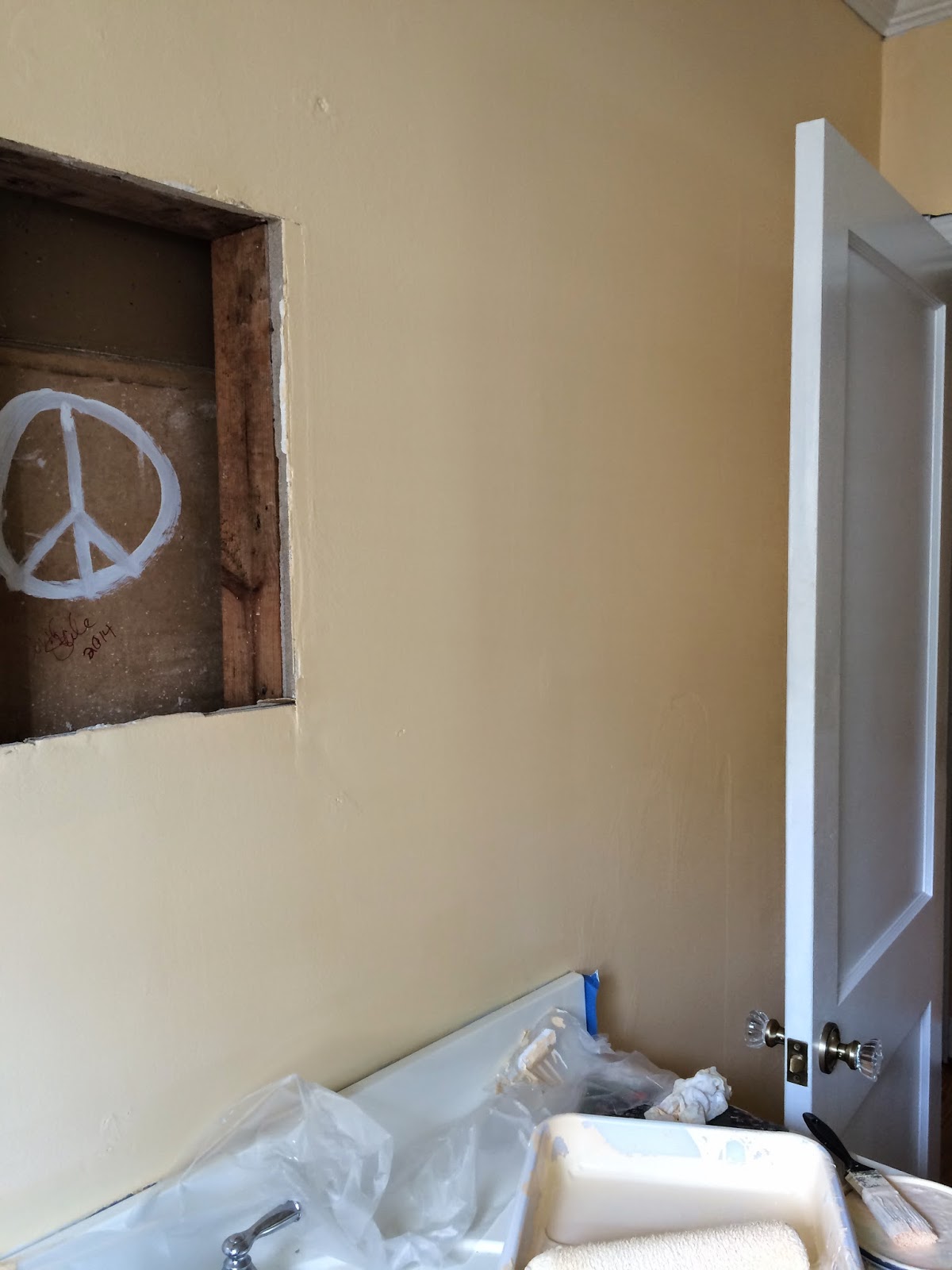 Before covering up the opening, I painted a peace sign and signed my name and the date. Maybe the next remodeler will find it. 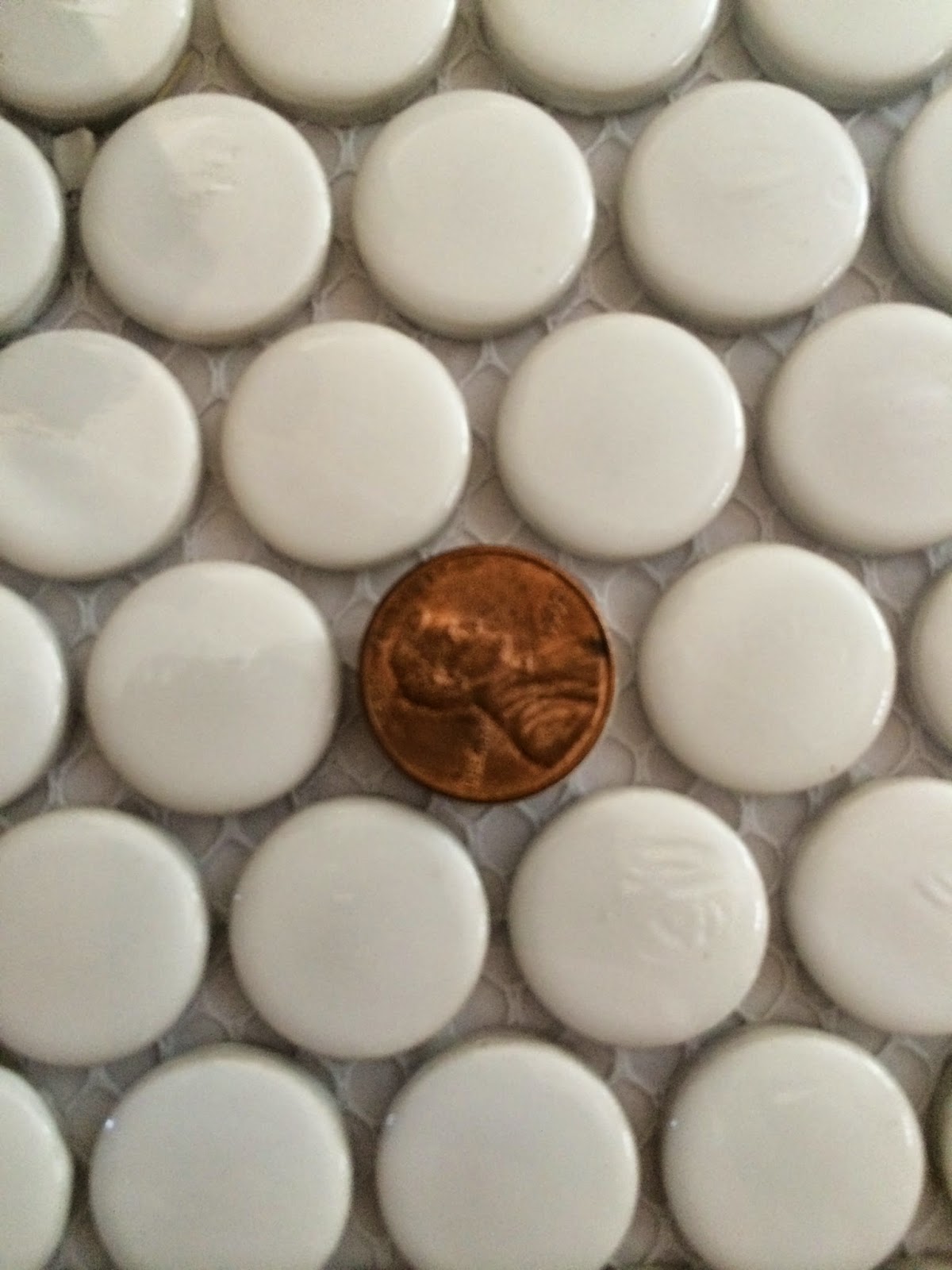 I wanted to put in a tile backsplash and border and found this great retro penny tile on clearance. It matches the white ceramic tile in the tub and the circles echo the rounded detail on the cabinet. 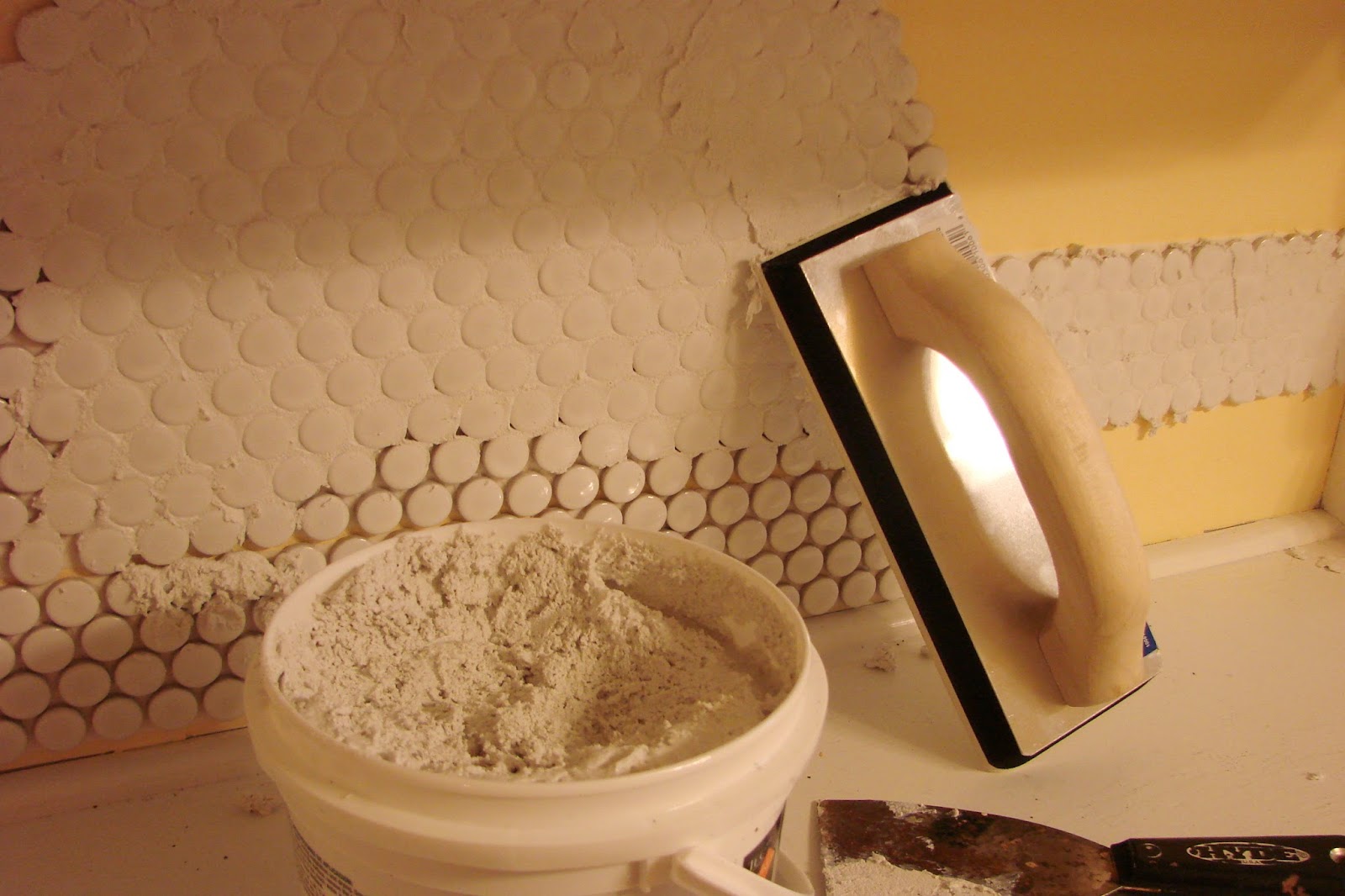 Tiling is a lot of work. Especially smooshing the grout in and then cleaning it back off. When I was working, I was flashing back to feeding babies rice cereal, who would immediately push it back out of their mouths. Spoon in, scrape what is ejected off their cheeks with the side of the spoon, spoon it back in. Over and over. Except that the tiles don't bang their chubby little fists on the high chair tray and chortle with glee as they extrude the grout. 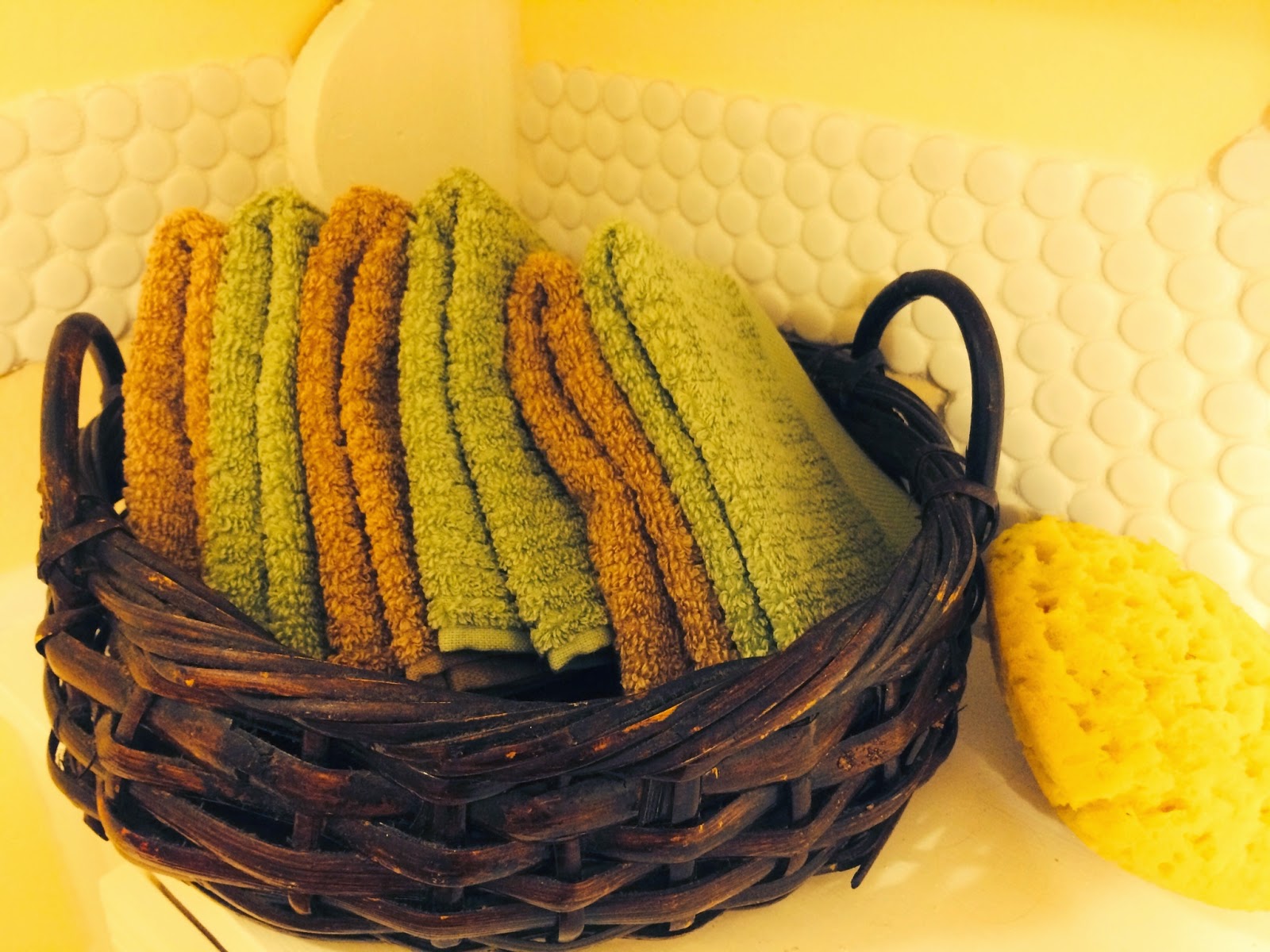 Now that the entire bathroom is in shades of tans/browns and white, with only a few green accents, towel choice was easy. I found (on sale, because that's how I operate) cotton towels that are quick-drying and so easier on the environment because they require less dryer time. 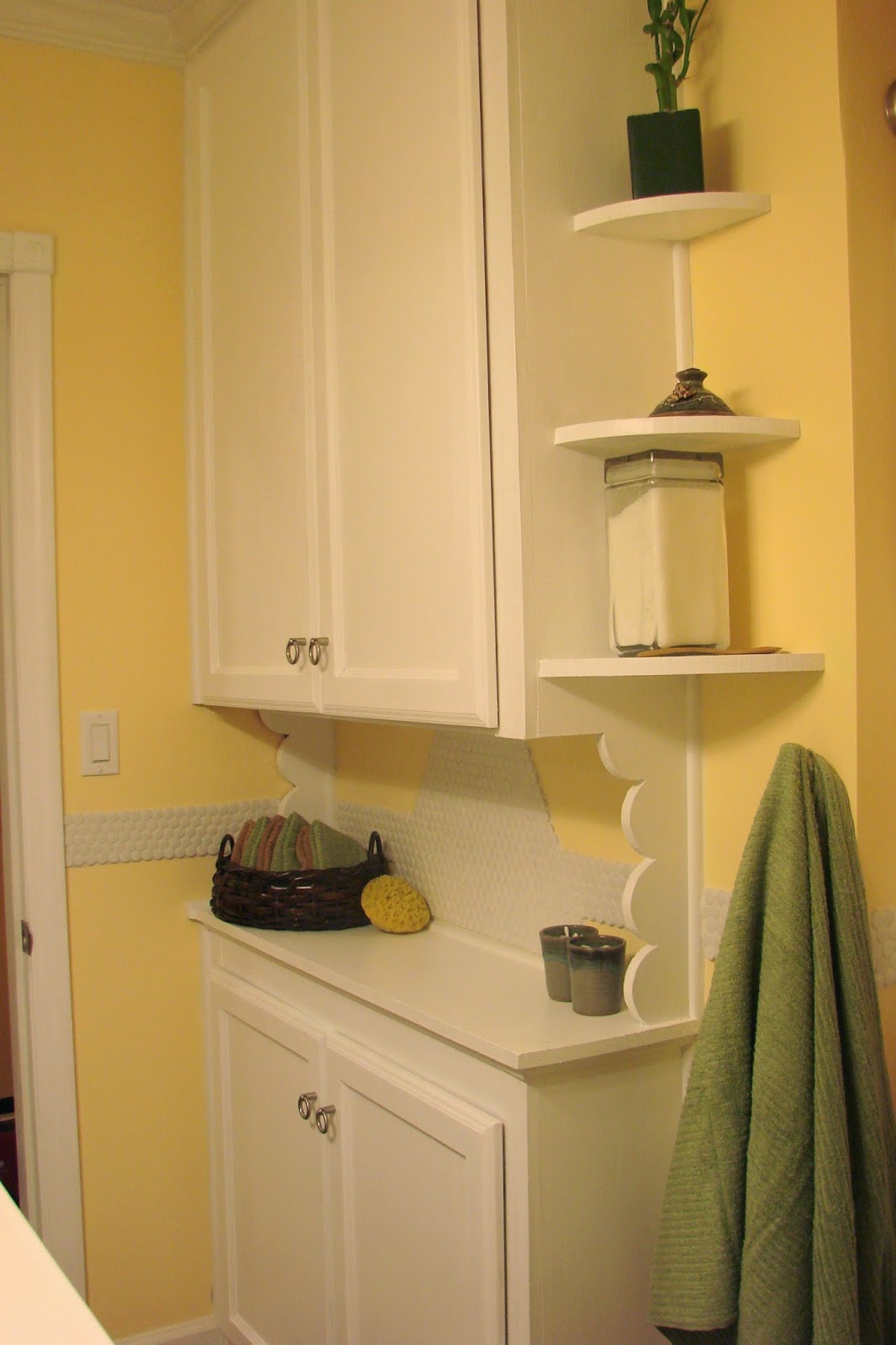 Hanging the cabinet doors was less than easy on my own. I needed a hand to hold the door in place, a hand to get the hinge aligned, and a hand to use the screw driver. Last time I checked, I only had two hands. It was especially difficult balanced on a ladder. But I did it, and the hinge adjustment worked as advertised to make them line up perfectly. I wish I had the before photo, because this looks like a new cabinet now. 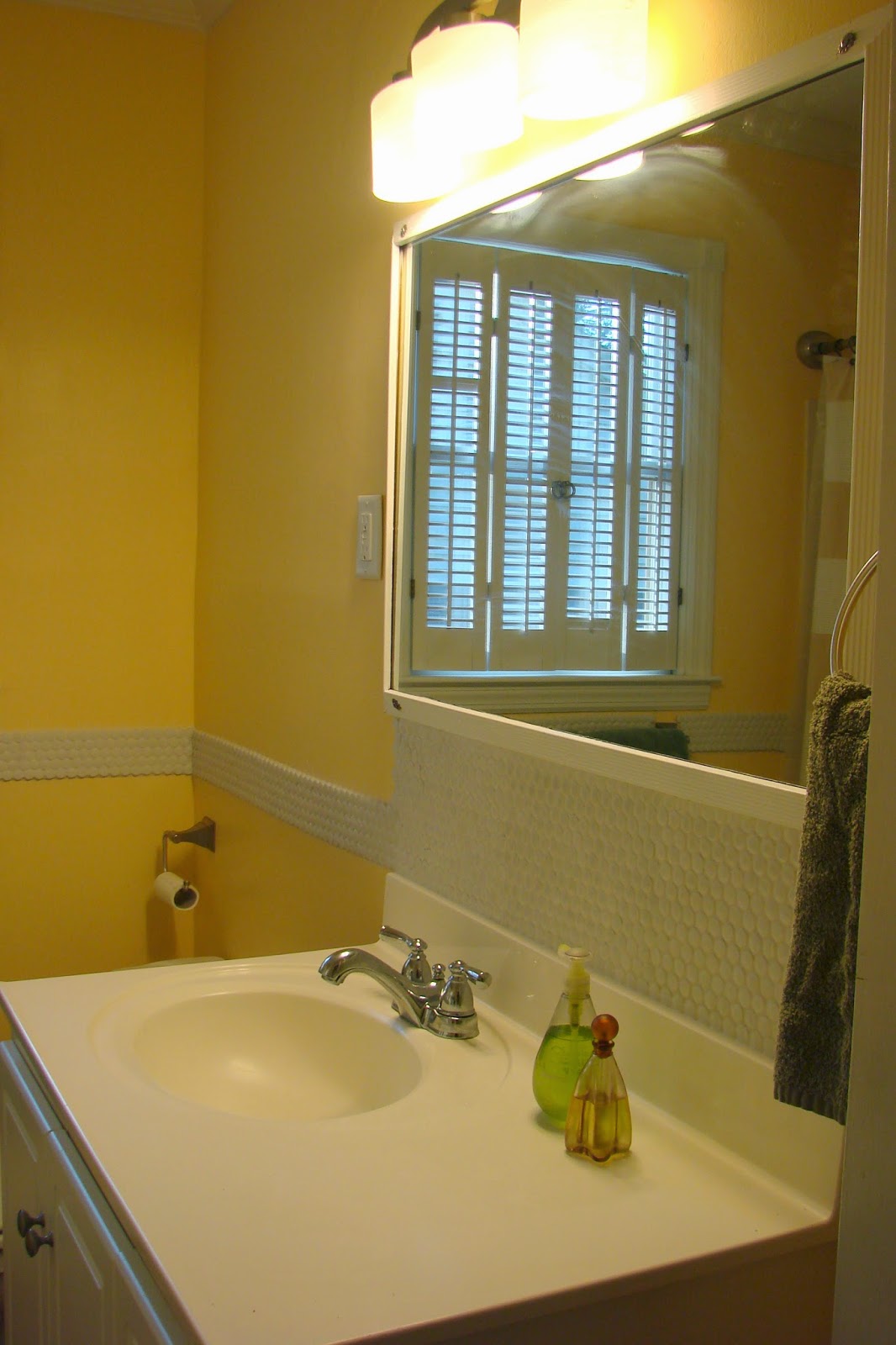 As tough as hanging the doors was, it didn't compare to installing the light fixture and mirror. I'd re-used a black wooden frame I already had, painted it white and bought a mirror to fit. I had a hell of a time balancing it as I affixed it to the wall. 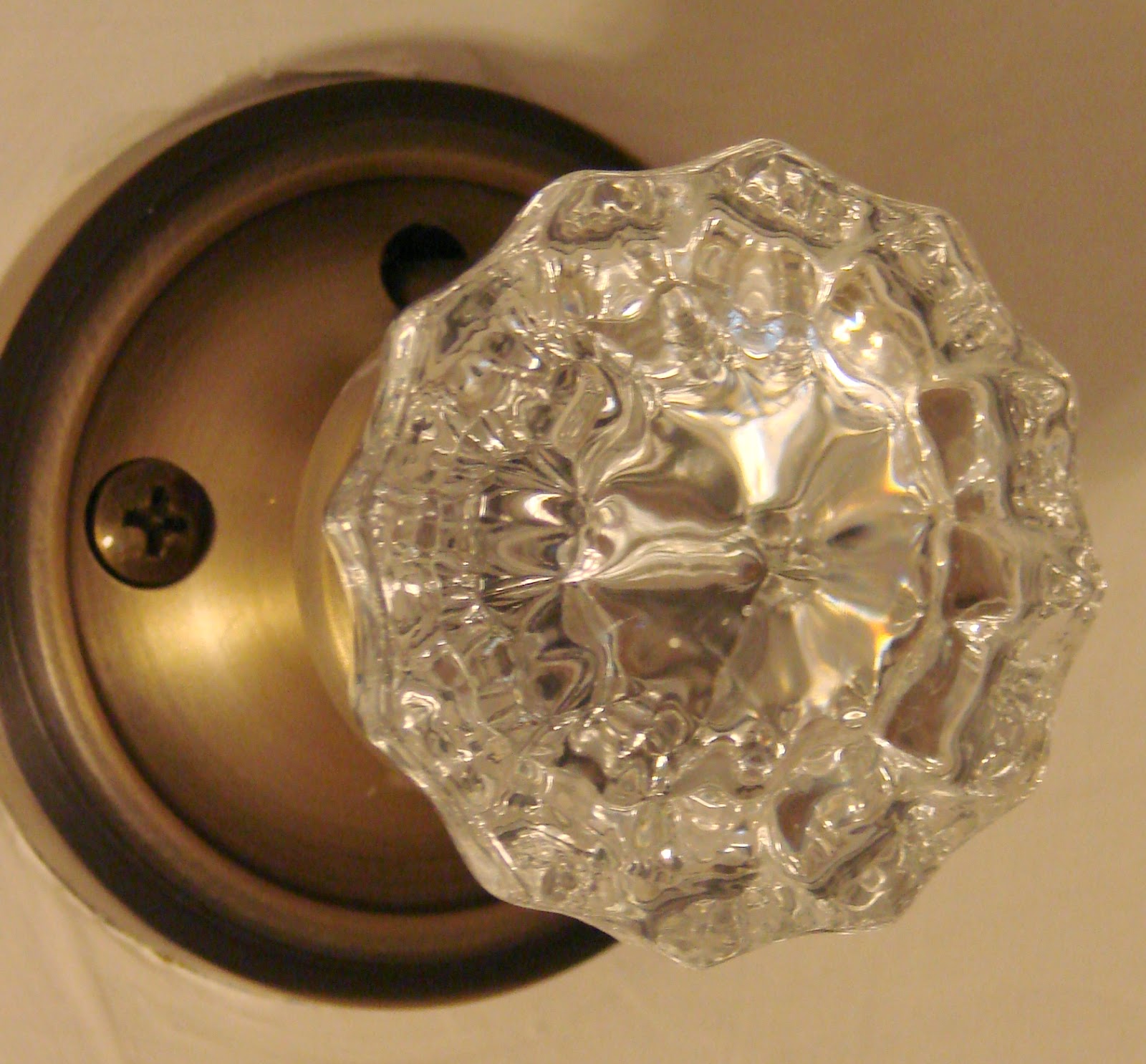 The only interior door in the house without a glass knob was the bathroom. It had been replaced with a shiny brass knob, probably so it could be locked. But I discovered a company that sells replicas and was even able to get one with a lock. 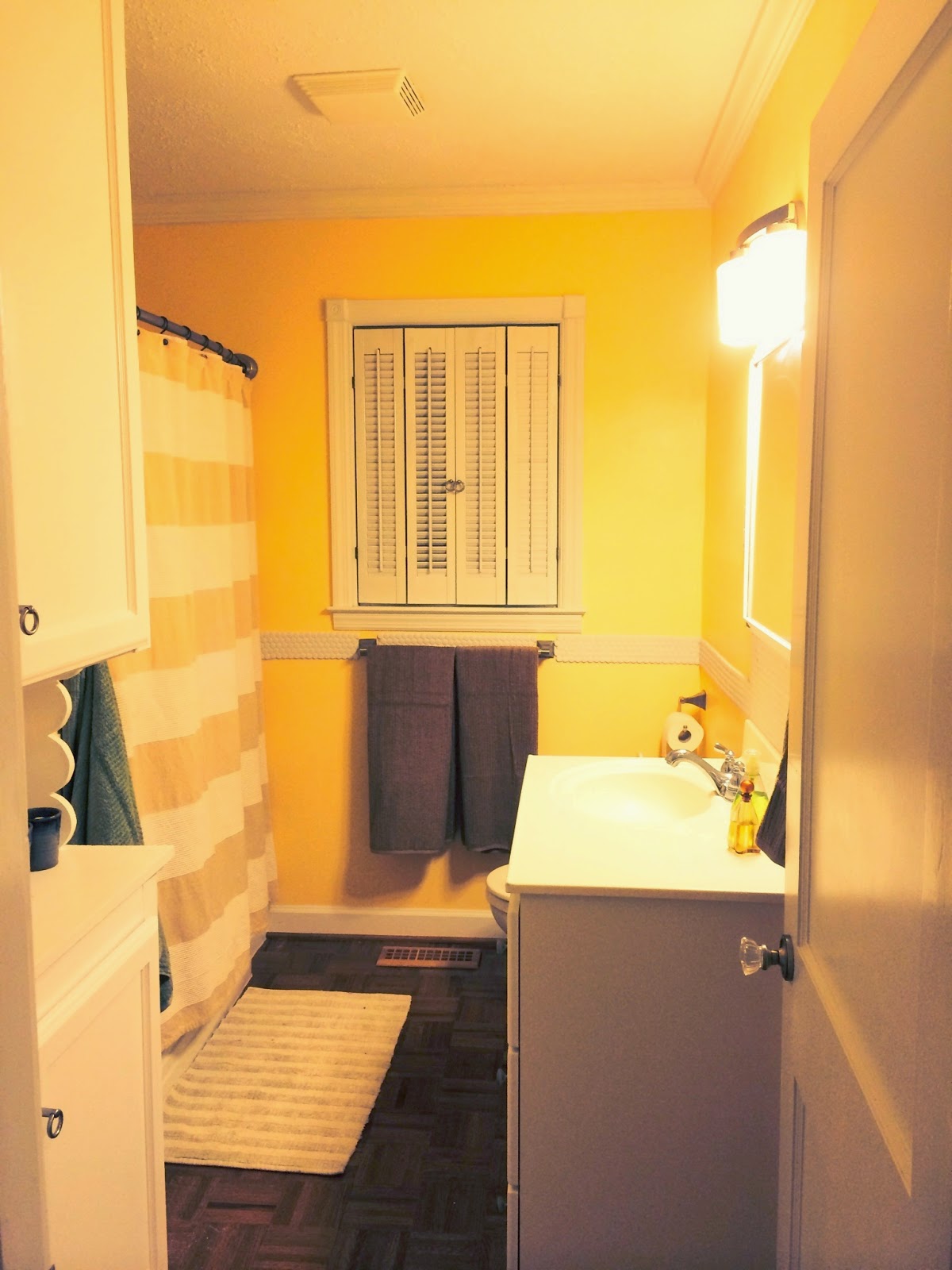 And done. I installed a towel rack, a hook for a towel by the tub, a curved shower curtain rod, toilet paper holder and hand towel ring. And put matching knobs on the shutters. Hard to tell from the pictures, but it feels bigger and lighter in there now. I'm looking forward to showing it to my younger son when he visits this weekend.
Posted by Secret Agent Woman at 6:24 AM