I am determined to finish this travelogue, so that I can have it for my own records. So bear with me, I'm heading back to September for the next two or three posts. 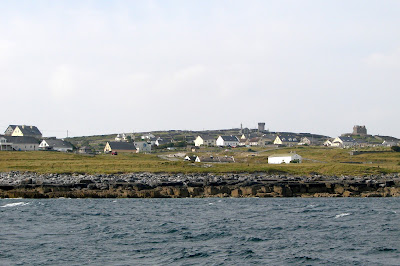 The morning after our day in Galway, my fiancé walked down to the market to bring back scones, blueberries and coffee for breakfast. We decided at the last minute to visit the Aran islands, which are Burren outcrops, but when we called, we found we'd already missed the earlier ferries to Inis Meain and the more touristy Inis Mor. We made the drive to Doolin along a pretty scary narrow back road in time to catch the ferry out to Inis Oirr (Inisheer), the first and smallest of the Aran Islands. We sat on one of the outside benches on the Jack B. The water in Galway Bay was choppy, but still no rain. We saw a pair of dolphins in the waves alongside us, on the starboard side. 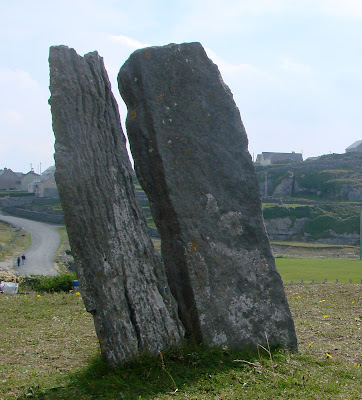 We hiked up a steep road to Cnoc Raithnighe, a site which confirms occupation of Inis Oirr during the Bronze Age, around 1500 BC. An archaeological dig uncovered a cremation site with decorated pottery fragments containing burned human bones. 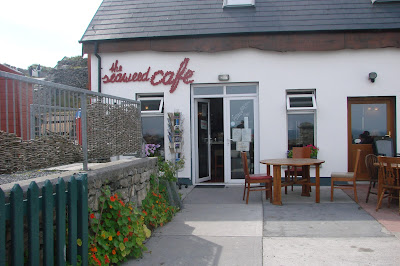 Most others from the ferry took horse-drawn tours, but we decided to walk. First, though, we stopped at the Seaweed Cafe for lunch. 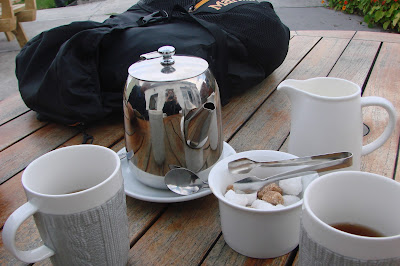 We ordered a pot of hot tea and split a bagel with cream cheese and local smoked salmon and a chicken and cheese panini.  The mugs wore little ceramic sweaters in honor of the local industry. The traditional hand-loomed jumper made from undyed cream-coloured wool that I'd bought the day before, in fact, was made in the knitting mills on these islands. 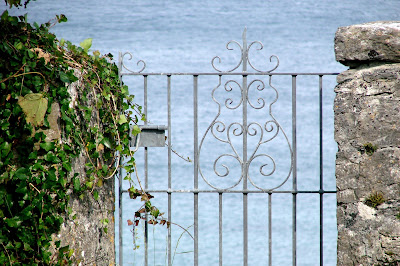 We sat for a while, just enjoying the breezy but still sunny day. When we got up to walk again, everyone else had scattered and we were blissfully away from other tourists for the rest of the day. 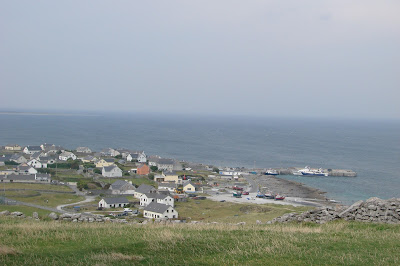 Inis Oirr means Eastern Island, and is geographically the smallest of the Aran Islands. It is about 1400 acres and has a population of less than 300 people. It is part of the Gaeltecht so we said "Dia duit" to every local we encountered and we were tickled to get smiles, nods, and a friendly "Dia is Muire guit" in return each time. 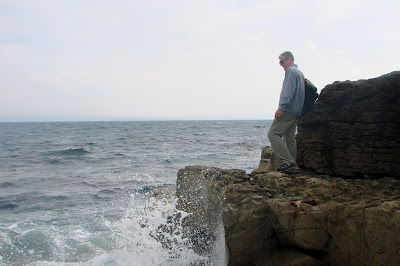 Our walk took us through the countryside, down past a tiny airstrip and to the rocky shore. We had a view of the mainland and cliffs of Moher. 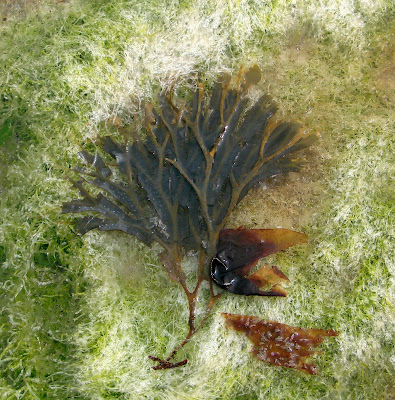 We were headed for the Plassey shipwreck site. The brochure for the ferry said it was part of the television "Fr. Ted" series but we had no idea what that meant until we returned home and looked it up. 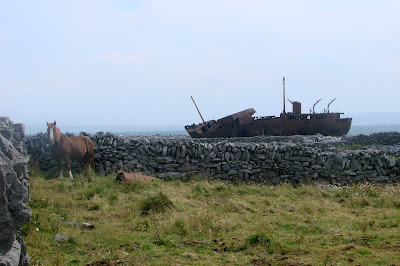 The iron ship's hull was broken and the back half canted to one side. Although it appeared to have been rusting there forever, we later found out that the shipwreck occurred in 1960. With a cargo of whiskey, stained glass and yarn, it was caught in a storm that March and ran aground on Finnis Rock, offshore. 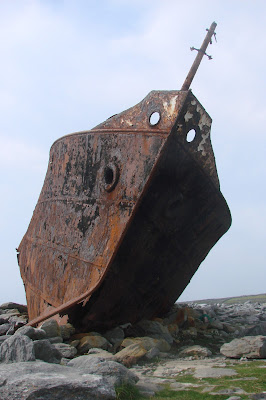 The island residents tied a rope line to each of the three rocket flares they had and shot them toward the ship. The final one hit the mast and they were able to rescue the whole crew, one man at a time, using that safety line to bring them to shore. 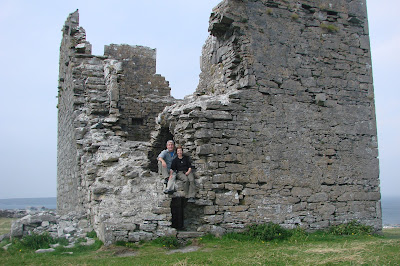 With limited time, we skipped the lighthouse and went instead to O'Briens castle, a three-story stone fort from the 14th century. It was built on a Iron Age site, Dun Formna, which was the home of the island's chieftan in 400 BC. 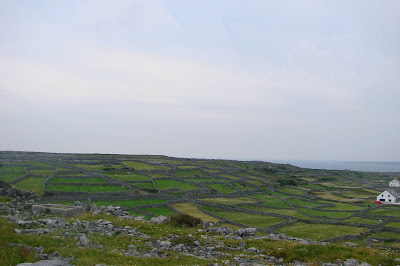 The land was divided into small pens, many empty. In the early days, the folks who lived here layered sand and seaweed over the rock to make fertile soil for near-subsistence agriculture. 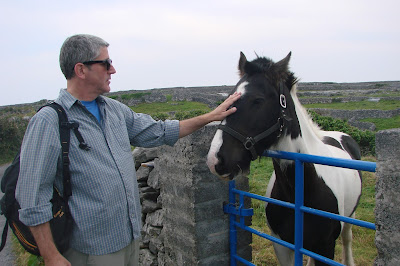 There were horses in some of the pens, often peeking over the fence, and a few cows and sheep.  One horse approached to be petted and then followed us around the corner for more attention. 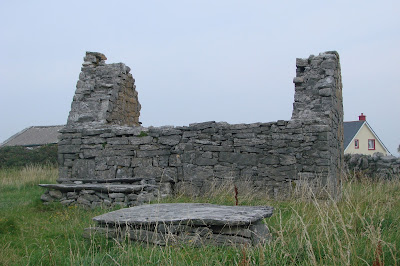 Our next stop was Cill Gobnait, a very small 11th century church. 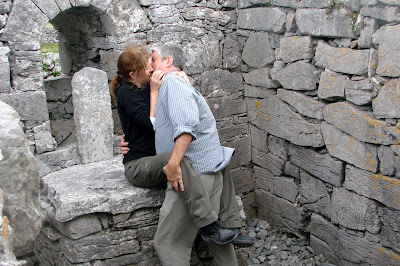 Prior to the Catholic church's ascendancy in Ireland, the Iron Age island residents would have been Celtic pagans, with multiple gods and goddesses. The spirit of those older fertility-based deities at the altar was too strong to resist. 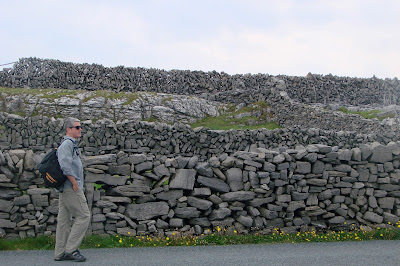 We had about two hours left and walked back along the endless stone wall-lined road. 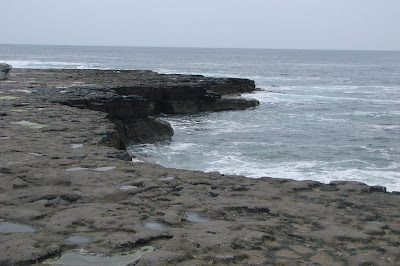 We went down to an area of the shore where seals are sometimes seen. 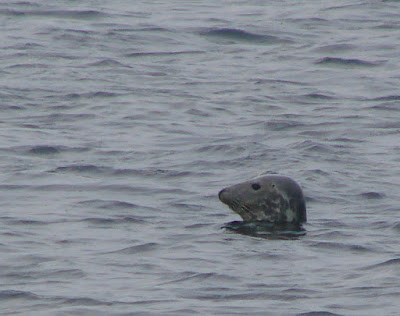 Finally, we saw a couple of them bobbing in the water. We sat for a while on the rocks watching the closer one before it was time to head back. 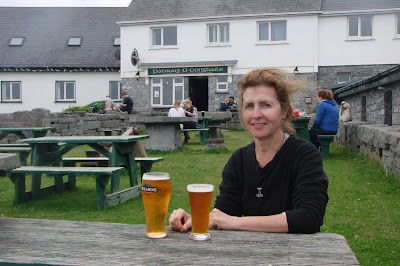 We had time to spare before our ferry left, so we sat outside at Padraig O'Conshaile's pub, the only one on the island. My fiancé had a pint of Bullmer's cider, which I didn't like at all. It tasted like sweet, fruity beer to me. I opted for a half pint of Bogman's pale ale. It was a little funny to see how many people were ordering Coronas and Buds. 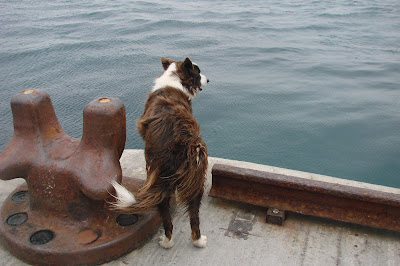 The ferry ride back was on rougher waters and the waves washed up over the deck. We got a little sea spray in our faces but the folks on the left side got drenched. All but three German women moved away to a drier spot. They were obviously made of sterner stuff than we. Since we weren't taken with Ballyvaughn's restuarant options, we decided to drive down to Lahinch to find a place to eat. When we asked about good seafood restaurants, a young women at the grocery store suggested the Captain's Table. However, when we saw the logo "for salty sea dogs" we decided to pass and went to the Cornerstone pub. It was a good choice it turned out, and we had wine, crab and salmon potato patties on greens and spinach and ricotta tortellini. And then back to our cottage at last.
Posted by Secret Agent Woman at 9:36 PM