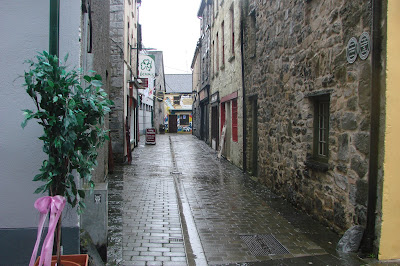 Our last full day in Ireland, it finally rained. We'd brought rain jackets and an umbrella under the impression that it rained all the time there. Apparently not. At least, we certainly lucked out with beautiful weather on the other seven days. But on this rainy day we headed to Ennis, a medieval town, to walk around. 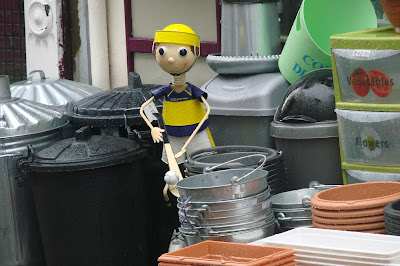 We walked around the winding streets for a while. This little cricket player stood inexplicably amongst the pails for sale outside a hardware store. 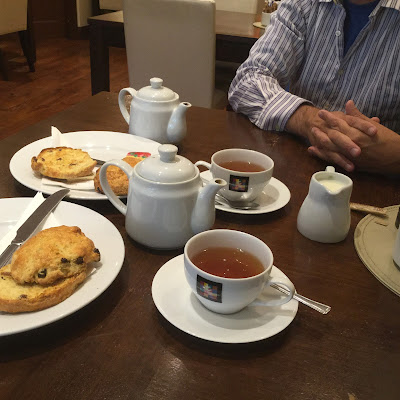 We went into a few stores, but mostly found places to duck into so we could sit where it was dry. First up was hot tea and scones at the Souper Café. 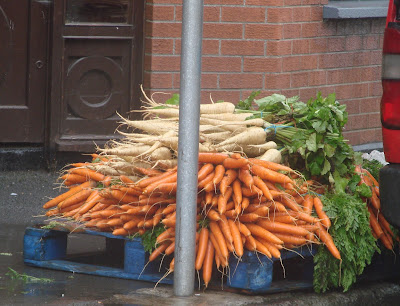 I liked this pile of enormous carrots and parsnips. As near as we could tell, the Irish don't eat a lot of vegetables. However, most dishes we ordered had simple leafy green salads. Still, the main focus did seem to be mammalian. 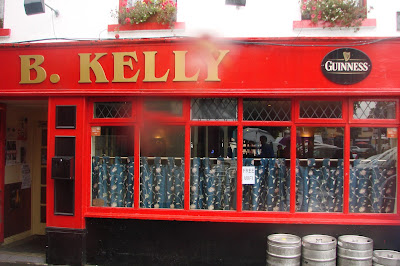 Next place we went into was B. Kelly's. Honestly we stopped here for sentimental reasons, in honor of my paternal grandfather's name. Inside we discovered both a bar and an off-track betting station. 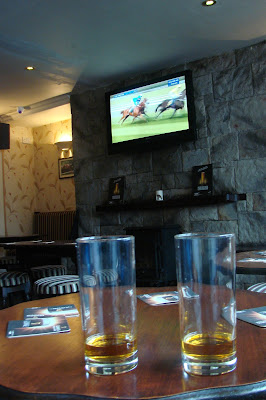 We had a couple of 12 year Red Breast whiskeys and watched folks betting on the races. We met a local man who chatted with us for a bit. We asked him if he spoke Irish and he said he didn't but told us if someone said, "Conas atá tú" ("How are you"), we should answer, "Táim go maith." I said, "Yes, you could say "Táim go maith," or you could say, "Ana mhaith, go raibh maith agat. Agus tusa?" He was mightily impressed. 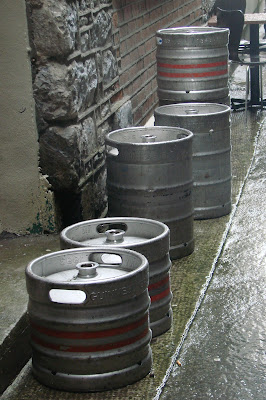 Outside the bar were kegs, probably of the ubiquitous Guinness. 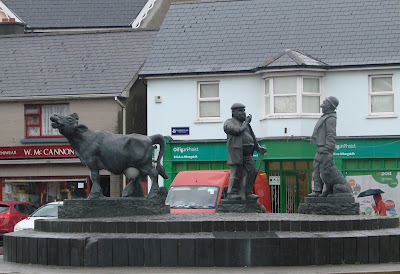 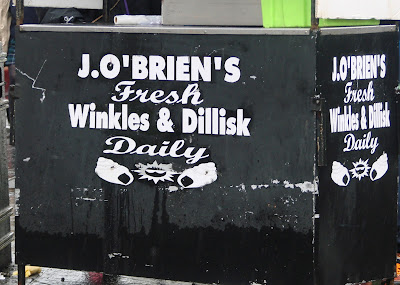 Had I known that "winkles and dillisk" were periwinkles and sea grass, I'd have bought some to try. As a kid, I learned to dig periwinkles out of the sand in the receding tide and my own kids and I made a batch into soup one summer. 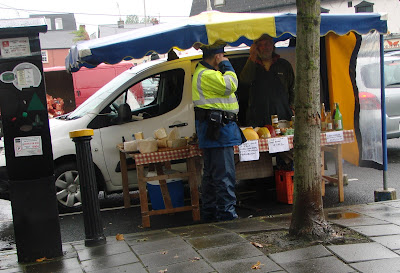 There were tempting cheeses for sale as well, but we would be flying home the next day and so passed them by. We did, however, scout around in thrift stores, and my fiancé bought the suit he would wear as the Prince of Dimness in my family's murder mystery party at Thanksgiving. 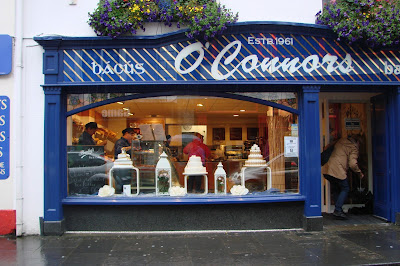 We picked up a chocolate pastry at O'Connor's bakery to bring back with us and also bought some tea and treats to bring home for our children. 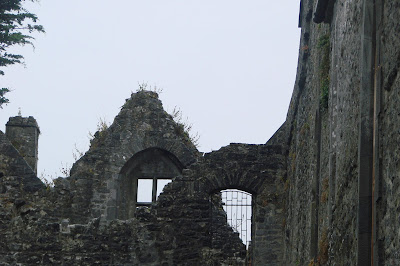 The ruins of the old Ennis Friary on Abbey Street, a Franciscan church from the thirteenth century, could only be viewed from behind the gates. 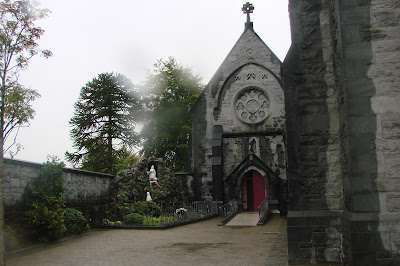 Next to it was the newer church and we were able to go inside. I'm always struck by the odd juxtaposition of tourists in a church alongside local people praying. It reminds me of my grandfather's funeral when he was buried at Arlington National Cemetery - us in mourning at the graveside while his coffin-covered casket was pulled in by a riderless horse, while tourists in colorful Hawaiian-print shirts watched from a distance. 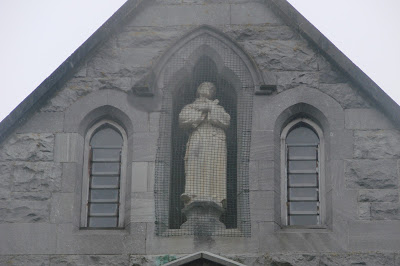 One of the statues, of St. Francis, was in an alcove but covered by heavy wire netting.  He looked like he was imprisoned. 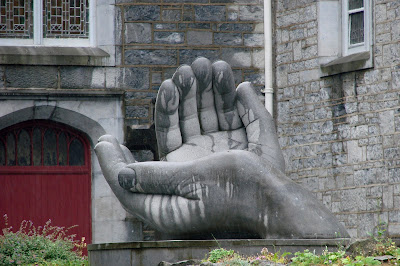 By one of the church doors there was an enormous sculpture of cupped hands. Maybe receiveing communion? 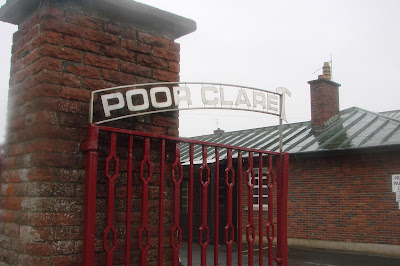 Around the corner and down the street from the friary was a convent that now houses nine nuns. 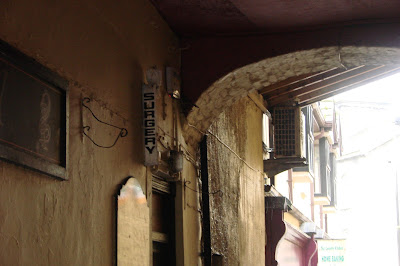 The covered alleys provided a little shelter from the rain. In this one, you can apparently get a little surgery done? Or maybe that's a generic sign for a physician's office. 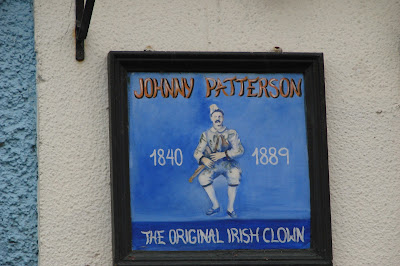 I had to look this up when I got home. This guy was orphaned and raised by an uncle in Ennis. He joined the Army at 14 and then bought his way out by signing on with the circus. He left for the States after he married, became wealthy, and returned to Ireland at the age of 45. However, he angered people by singing about Catholics and Protestants co-existing peacefully and died from injuries sustained in a brawl at 49. There you have it, your Irish Clown history lesson for the day. 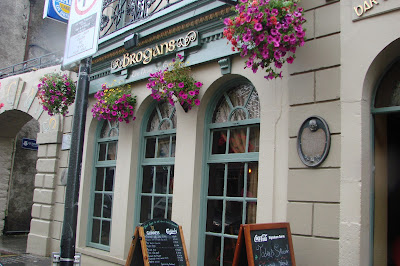 The last thing we did in Ennis was stop at Brogan's for a very late afternoon meal. 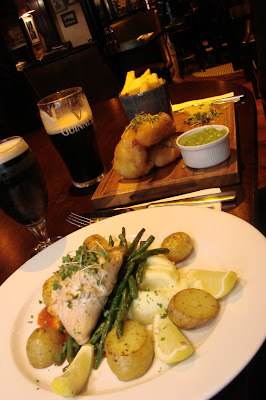 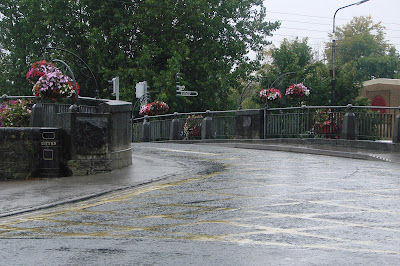 We headed back through the rain-soaked streets to return to Ballyvaughn. After doing
a little preliminary packing, we walked into the village for a whiskey at the Hyland Burren Hotel for a whiskey - the first regular Jamison whiskey we had while there.  And then walked over to Greene's Pub when it opened for more whiskeys. We decided to try the Connemara peated single malt whiskey. Bad decision. It smelled like a turf fire and left an very peaty aftertaste. We decided to split a Yellow Spot just to wash that taste away. Then walked home in a very light rain. We saw an animal amble by behind a fence and disappear into the brush. Cat-sized but fatter, with a very fluffy tail that reached about halfway to the ground. Maybe tannish or gray, hard to tell in the dusk. When I looked it up later, I realized we'd seen a badger. We had some wine and cookies and wrapped up our last night in Ireland.
Posted by Secret Agent Woman at 10:28 PM