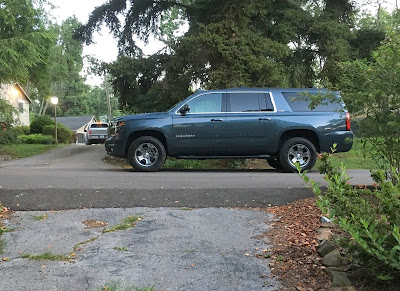 First, an update. The day after the dick across the street backed up without looking and crashed into my son's car, he parked one of their vehicles directly across from our driveway, and then moved the other out there, too. To "make a point," he said. The point being, presumably, that he's a dick. Interestingly, both members of that couple openly admit to various dodgy behaviors, including the husband trying to skirt city regulations in his business and the wife pocketing money from their joint business and hiding it from her husband. Just, you know, upstanding folks all around. But the good news is the insurance investigation placed him at fault and the guy's insurance is now paying for my son to get his car repaired and a rental car while that is happening. Sweet justice. 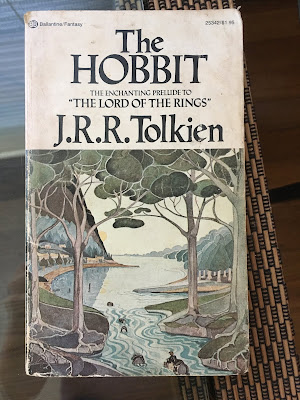 After much of last year spent reading while recovering from surgery and chemo, I definitely have re-caught the reading bug. I decided to up my usual Good Reads goal this year from 52 books to 60. But I'm a bit ahead of schedule again. The Hobbit was my 60th book, finished last week. This is the actual copy I read back in 5th or 6th grade, and the the Lord of the Rings trilogy after that. It launched me into a fantasy and sci fi phase of reading through high school. But I tell you, my feelings about it have changed in the past 45 or so years since I last read it. I decided to re-read this one after discovering that Tolkien was smitten with the Norse Sagas and based much of this work on Icelandic Vikings and Norse mythology. And indeed, now that I know that, the parallels are very striking. For instance, the charcter Beorn who shape-shifts into a fierce bear is just Björn (Icelandic for bear) and is clearly meant to be a berserker - the wild viking warriors who wore bearskins and fought like madmen. Even Gandalf is a name pulled directly from the sagas. But I don’t actually enjoy reading the sagas because they are insanely violent, and I didn’t really enjoy re-reading the Hobbit. It might be because the narrative style feels so dated. I think of it as a “intrusive narrator.“ The sort of book where the narrator announces that he won’t go into something until later in the book or makes some other comment about the characters separate from the story. And this may be entirely MY problem. I don’t like storytelling festivals, either. What I want is to be able to immerse myself fully in the story without the overt presence of a narrator. There was some nostalgia value for me, but I got bored with all the stabby bits and the song lyrics.

While I was at it, I read a compilation of Icelandic short stories from the 19th and 20th centuries that was a pretty comprehensive collection with an overwhelmingly grim vibe. In one, the subject was suicide: “When I was a young girl people often hanged themselves down there simply out of bad temper.” She goes on to say of her grandparents, “They were constantly scaring each other by threatening to commit suicide. Probably they didn’t know of any other way to get each other’s sympathy and to keep their love alive, and it lasted them all their lives long. I never noticed any other sign of affection between them than this.” Yeesh. The majority of the stories seem to have the following plot: The main character is either a desperately poor person or a well-regarded person in the village. Bad things happen to them, including being mocked or tormented by other villagers. Often there is violence done to them. The story ends either with the person dead or weeping on the side of the road. Feel-good stories, basically. 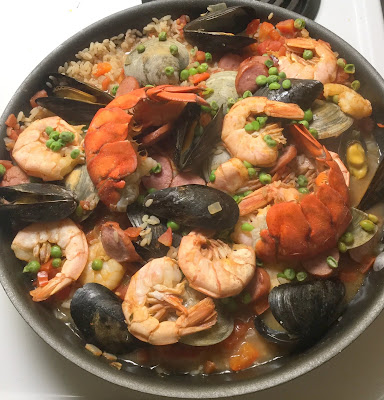 And in unrelated news, I made paella last night. Just look at all that oceanic goodness. I think we irritated the seafood store guy by requesting 8 mussels and 8 clams. This morning my husband took some of the leftovers and made them into cakes and served them with poached eggs.
Posted by Secret Agent Woman at 3:50 PM