I know, I keep disappearing. 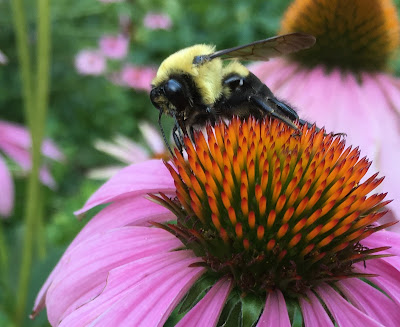 Spring has morphed into summer and still I feel an overwhelming compulsion to work in the yard. I have spent more hours than I should probably admit pulling ground ivy (AKA creeping charlie) out of the back yard, in an effort to allow grass, clover and other weeds I like to grow. I want my yard as bee-, butterfly- and bird-friendly as possible. And besides, there is something wildly satisfying about systematically purging something invasive and damaging. Cue the "oh, it's a metaphor" music. 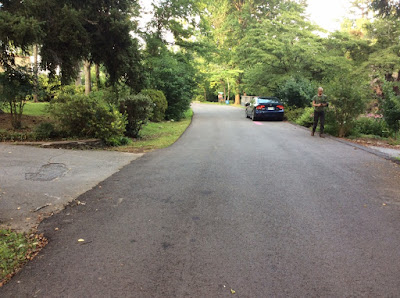 In other news, we are embroiled in a surprising dispute with a neighbor who is the epitome of an entitled, rich, white guy. Last weekend, my younger son was at our house using his forge to do a little blacksmithing. He'd wrapped up and was having dinner with us on the back deck when we heard a crash. Turns out the neighbor across the street had backed out of his driveway without looking and bashed into my son's car. That's my son walking back to our driveway after getting a photo of the damage, and the neighbors' driveway is across from us, on the left side of the photo. See how very far away my son's car is? First the neighbor said my son's car was "so small" he couldn't see it. It's a standard four-door sedan, but the neighbor and his wife both drive what my husband calls "urban assault vehicles." And neither of them are good drivers - she's knocked over our trash bins a number of times. It was bad enough that he couldn't be bothered to apologize, but worse that he called the police hoping to prove it was my son's fault for being parked on the street. Which, for the record, is NOT illegal as he is claiming. The guy's just being a dick because he said his rates will skyrocket if the claim goes on his insurance. Right - that makes it okay to try to screw over the neighbors' kid. He's like a spoiled child who breaks another child's toy and then blames the other child for having a shoddy, breakable toy. At any rate, we're not rolling over on this one and the neighbor is mightily pissed. He's started doing things like parking their behemoth vehicles directly across from our driveway to make it difficult for us to get out. And yet somehow, we're able to do it without crashing into them. Why? Because we freaking watch where we're going. 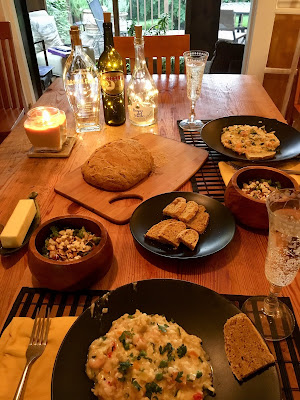 Deep breath. In happier news, the 4th of July is also our engagement anniversary. So rather than doing the standard patriotic thing of barbecues and so on, we stayed in and cooked. Let me tell you, I make a mean seafood risotto. This one had Argentine red shrimp and crab and it was the kind of dish that makes you saying things like, "Holy fuck, that's good." Seriously. I'd also made a loaf of sourdough bread that day and my husband put together the salads and served as my sous chef for the risotto. 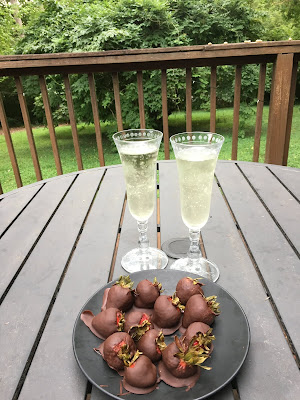 And the previous day I'd soaked strawberries in bourbon and then coated them in dark chocolate. We sat out on the deck eating them and drinking prosecco, and watched the fireflies emerge from the ground while the bats swooped above our heads. As it got darker, we could see fireworks set off is several directions around us. And felt lucky. I'll be popping in and out through the summer, but I am enjoying having my life be too full to spend much time in front of a computer.
Posted by Secret Agent Woman at 11:57 AM