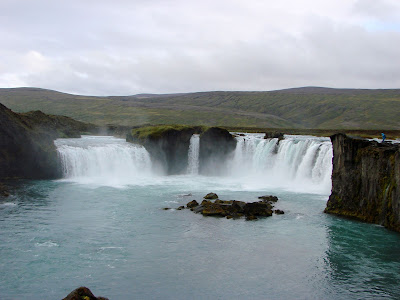 After a good night's sleep, we hit the road to drive the Diamond Circle. First stop, Goðafoss (waterfall of the gods), fed by the Skjálfandafljót river. When the Vikings voted in 1000 to officially become Christian, the Lawspeaker Þorgeir Ljósvetningagoði threw his statues of Norse gods into this waterfall. 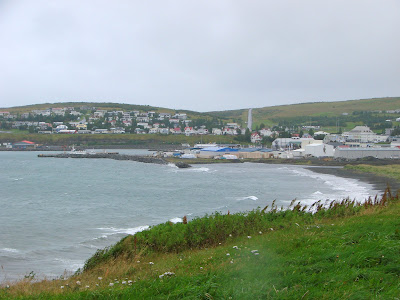 Next we headed farther north to Húsavík, Iceland's oldest settlement, on Skjálfandi bay.  According to the Sagas, the Swedish Viking Garðar Svavarsson stayed there one winter, in 870. He left one of his men and two slaves there and they established a farm. 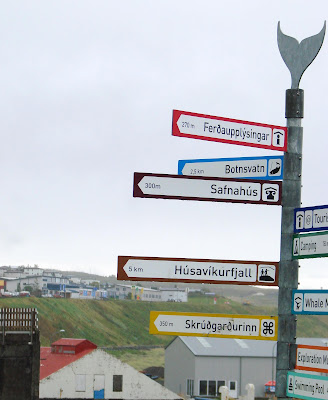 There are about 2300 residents, but a big tourist draw for whale-watching trips. Also of note about the town is that the Apollo astronauts trained around Húsavík in the 1960's. 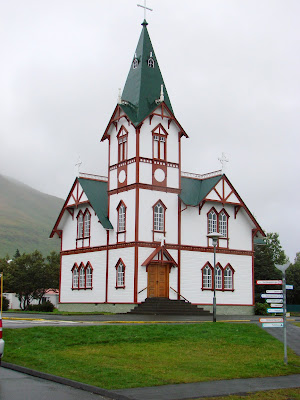 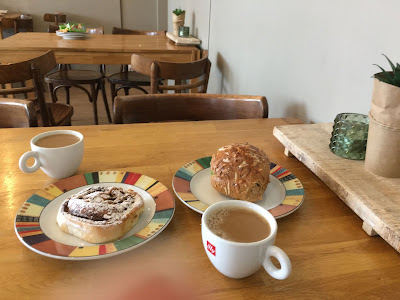 It was a cold, rainy day and it was nice to find a little café to have pastries and coffee. An aside: Both my husband and I regularly drink our coffee black. But on vacation, we both use cream and sugar. 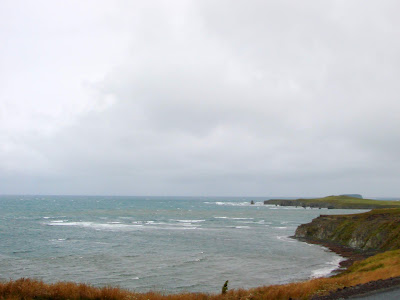 After breakfast, we drove a little farther north, along the Öxarfjörður. These fjords are part of the icy Greenland Sea, which is part of the Arctic ocean. 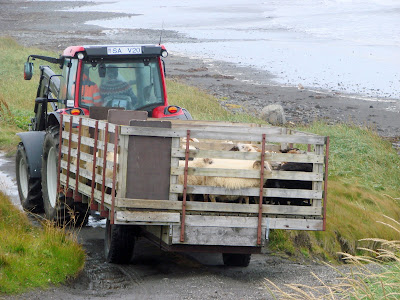 That's all we needed to know - it's our tradition to at least wade into any new sea or ocean we encounter. We veered off the main road onto a path that lead down to the shore. But first we had to let this farmer (wearing a lopapeysa) pass with his trailer of sheep. 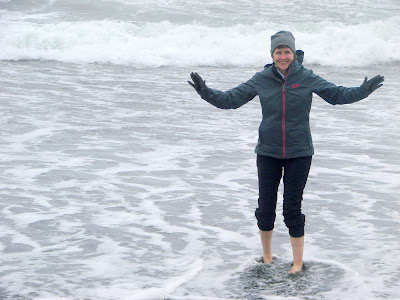 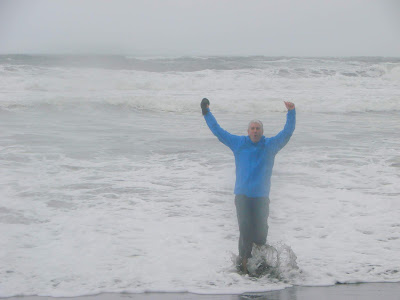 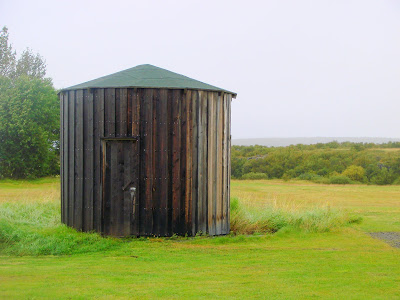 Then back to the Diamond Circle, now heading inland. 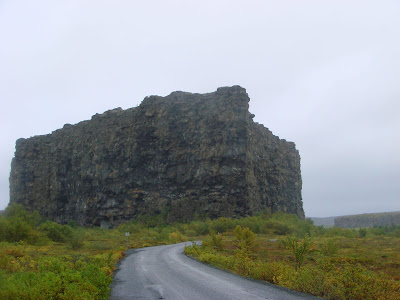 We drove into Vatnajökull National Park, which includes the glacial Ásbyrgi Canyon. The horseshoe-shaped depression in the land is said to be made by the hoof of Odin's 8-legged horse Sleipnir. This rock formation, Eyjan, divides the canyon for half its length.
We had to take an unpaved road that was under construction to get to our next stop, Dettifoss. This waterfall has the greatest volume of water in Europe. 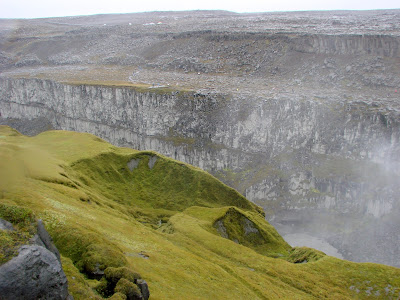 Dettifoss is in the Jökulsárgljúfur canyon. As we hiked to it, the light rain turned into snow for a little while. 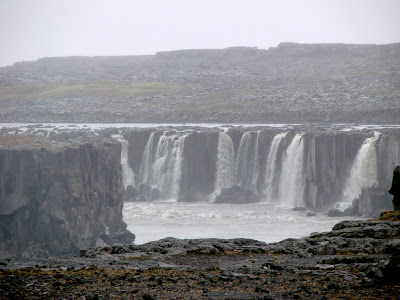 Also along the river Jökulsá á Fjöllum is Selfoss. Eventually the glacial melt that powers these falls ends up in the Greenland Sea. 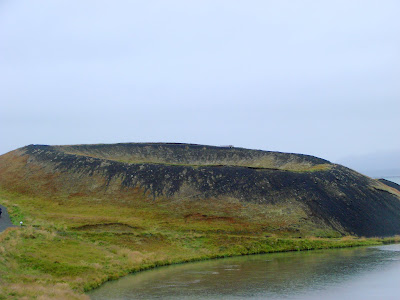 We continued along the road by the volcano Krafla, and got out to walk along Skútustaðagígar, a row of pseudocraters on the Stakhólstjörn pond. They were formed when lava flowed over wetlands and the resulting steam erupted, leaving cone formations with craters. 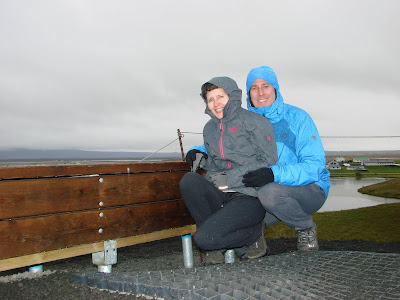 In spite of the rain/snow, we were thoroughly enjoying ourselves. 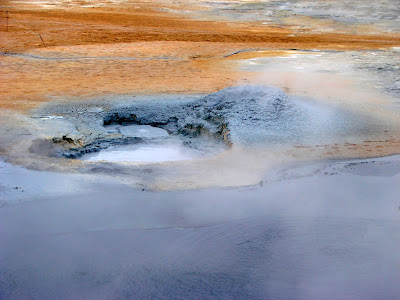 Until, that is, we got to the Hverir geothermal area. The red sand looks like it might be Mars, and there are steam vents and boiling mud pits. People were hiking in it, but it didn't take us long to decide the heavy sulphur smell wasn't worth it.
We stayed long enough to get a few pictures and then hightailed it back to the car. 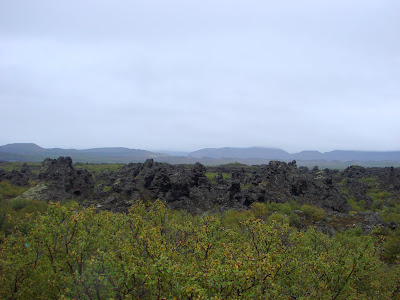 On to Dimmuborgir. 2300 years ago, an eruption sent lava over a lake, making it boil. The resulting steam left castle-like rock formations and hidden caves which are the homes of trolls. One vicious half-troll, half-ogre named Grýla and her husband Leppalúði live in Dimmuborgir. Grýla and her giant pet cat Jólakötturinn (Yule Cat) eat children over the Christmas period for not getting any new clothes. The idea was to encourage kids to finish their sewing and knitting in a timely way. The troll couple also has 13 sons known as the Jólasveinar, or Yule Lads. One after the other over thirteen days, the Jólasveinar come to harass Icelanders in a variety of ways. And I thought the Santa Claus tradition was a little creepy. 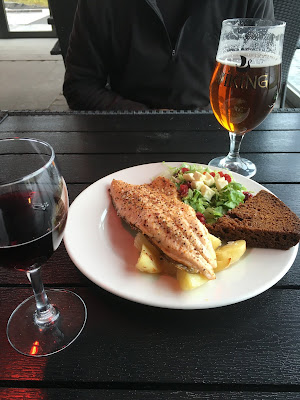 We had dinner at Kaffiborgir - trout from Lake Mývatn and hverabrauð, a type of rye bread steamed in a pot underground near a hot spring. 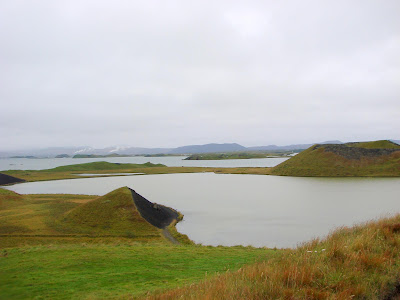 Mývatn means "midge lake" and is known for having huge swarms of annoying midges. Thankfully, they were absent when we visited. 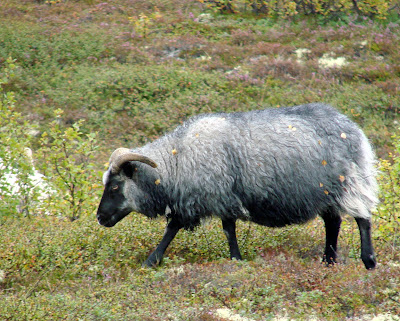 We finished the Diamond Circle and headed back through the countryside to Akureyri. 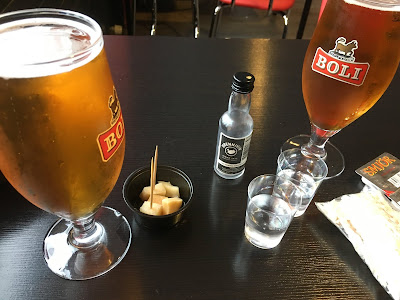 And after much urging on my part, my husband agreed to try the infamous kæster hákarl with me. Hákarl is Greenland shark that has been buried under gravel for a few months and then hung to age for a few more months. That shark breed has such a high urea content that it is inedible without being fermented. The end result is a food that is absolutely revolting but no longer actually poisonous. Anthony Bourdain described it as "the single worst, most disgusting and horrible tasting thing" he'd ever eaten. The chef Ainsley Herriot said it was "like chewing a urine-infested mattress." And Gordon Ramsey gagged and spit it out. We knew all that going in, but what the hell, right?
I went first. You can see there is a delayed reaction where the ammonia and god-awful taste kick in after I've said it's not too bad. Hákarl is served with a shot of Brennivín, which means burning wine but is actually an unsweetened schanpps flavored with carraway (commonly called Black Death). It's nasty stuff, too, but I was glad to have it to wash away the taste.
My husband had an even harder time with it, and followed Gordon Ramsey's lead while I laughed. Neither of us smelled the foul stuff until after we'd tasted it, and both agreed there's no way we'd have tried it if we had. It smells even worse than it tastes, if that's possible. We had plenty left over so my husband got another American tourist sitting near us to try it. He's friendly that way. 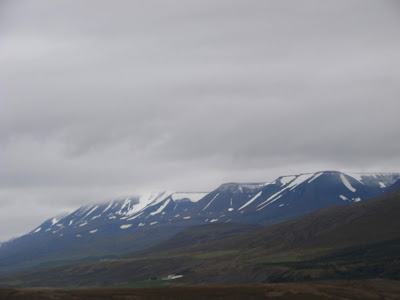 We went back to our room after that, and had a nice conversation with our host and his daughter. She told us that she had tried hákarl at a school festival where they ate traditional foods. She said, "I ate too much and I puked. And then I spent the rest of the night on the toilet." Kids. They don't pull any punches.
Posted by Secret Agent Woman at 4:24 PM