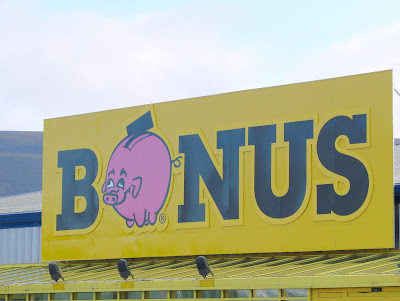 Before we left Akureyri, we made a stop at the Bónus, the biggest and least expensive of the grocery stores in Iceland. Our next couple of lodgings were located far from grocery stores and convenient restaurants, so we needed supplies. If you ask me, the Bónus logo pig looks like it was in a drunken brawl. 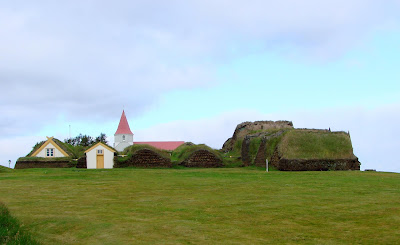 On our way, we took a little detour off the Ring Road to visit the Glaumbær farm, near Skagafjörður. The book I was reading when we left for Iceland was a book about Guðríður Þorbjarnardóttir, a Viking woman born in 980 who appears in both the Saga of Erik the Red and the Saga of the Greenlanders. She and her husband sailed to Newfoundland, and lived their for a year, returning to Iceland after their son was born. She's known as Gudrid the Far-travelled and Glaumbær was her last home. 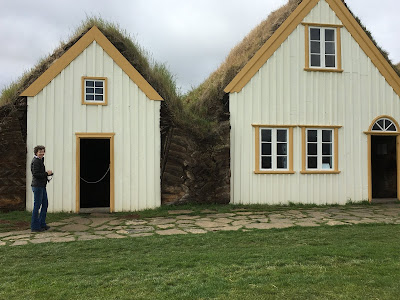 Although Glaumbær has been a farm for 900 years, the buildings have obviously changed. In Iceland, there aren't many very old buildings because homes and farms were built primarily of blocks of turf, which eventually degrade back to the earth. These homes are in the Danish-Icelandic style which came later, and were built in the 19th century. 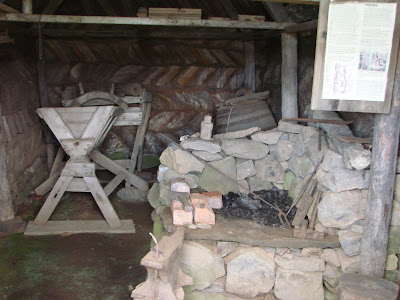 The insides of the houses are open to view so that you can see how the rooms were used. This one had a forge in it. 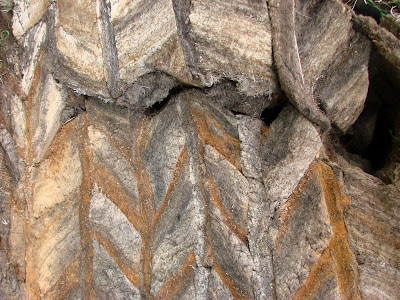 I love the chevroned look of the blocks of turf. 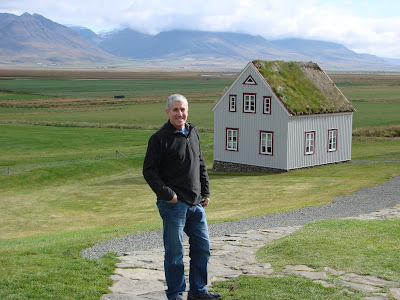 Icelanders name every possible building, landmark and even boulders. This house is Gilsstofa. 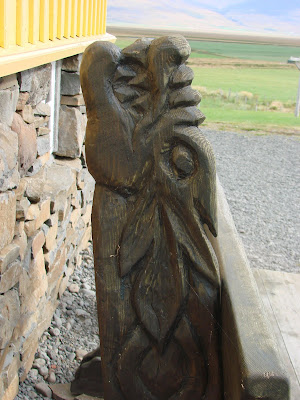 And, in front of the building Árbús, was a wonderful bench with carved dragon heads. I wish I could have brought it home with me. 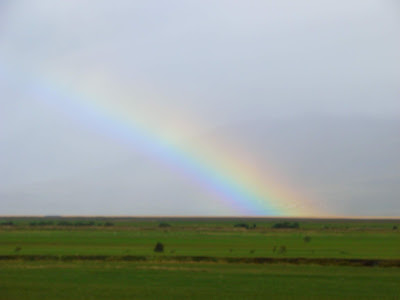 Just before we left, a rainbow appeared over the fields at Glaumbær. 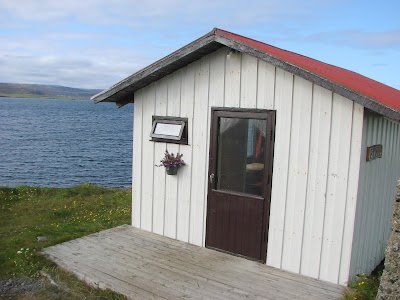 Then it was back to the Ring Road to a little cottage, Skjól, in Reykir. It's located near Stað on a small peninsula. 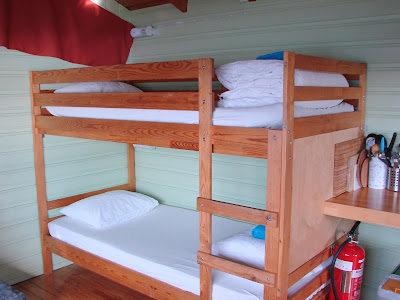 Oh, bunk beds. Somehow I overlooked that on the Airbnb site! But it was just a night and otherwise, we really liked the little place. 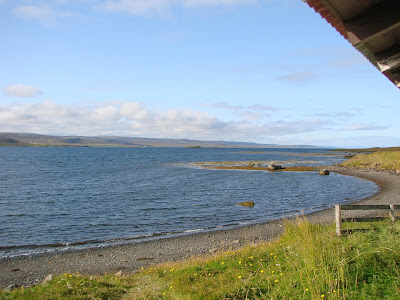 Our view from the cottage of Húnaflói bay, part of the Hrútafjörður. Across the fjord is the beginning of the Westfjords. 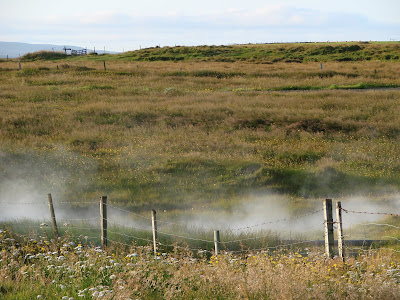 It's an area with a lot of geothermal activity, and you can see the steam rising from the ground. These streams fuel the tubs and showers. 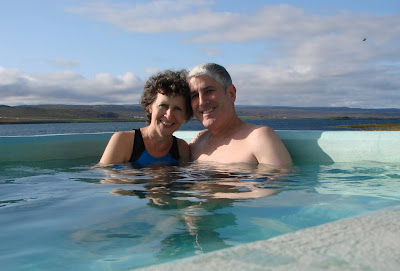 The cottages were near the Sæberg hostel, and we had the use of their geothermal tub, on the edge of the bay. I'd asked my breast surgeon about using the tubs in Iceland and she thought the lymphedema risk would be minimal. As it turned out, the tubs are just comfortably warm and so I didn't worry. We had it to ourselves and it was so relaxing! 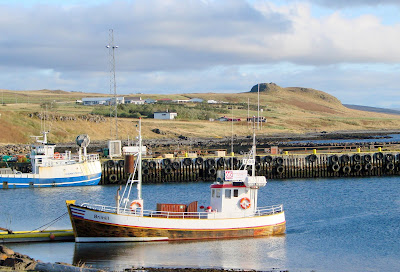 We decided to drive back up the peninsula to get dinner in Hvammstangi. 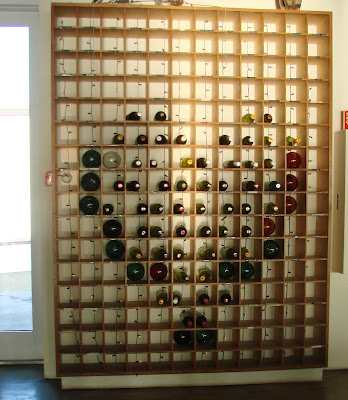 Sjvárarborg restaurant is in a building that used to be a slaughterhouse. You'd never guess it. 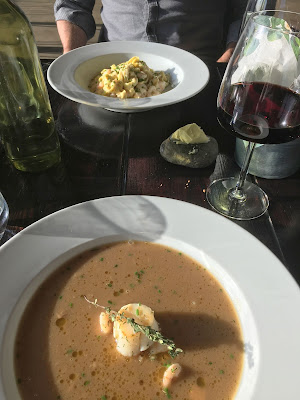 We had their seafood soup and langoustines with pasta. Both were really good. 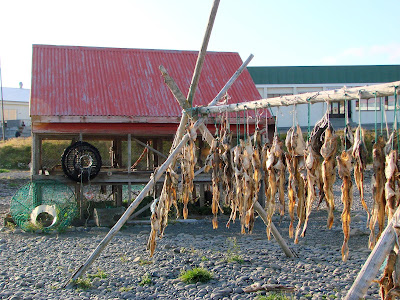 We did a little exploring after dinner and happened on this unusual (for us) sight. Fish drying on a rack. 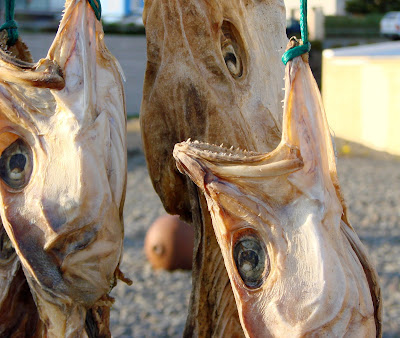 These become hardfiskur, the dried fish that is served with smjör (butter). And yes, I tried this, too, in Akureyri. While not as revolting as the fermented shark, I can tell you I don't care for it. And I think I'd like it even less now that I've seen the fish drying. 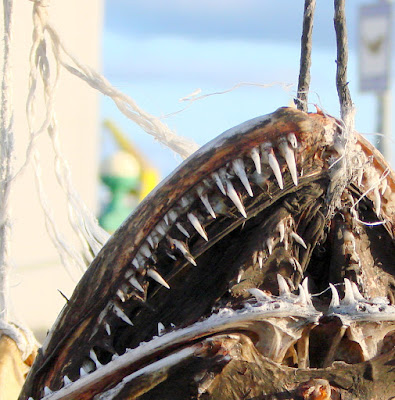 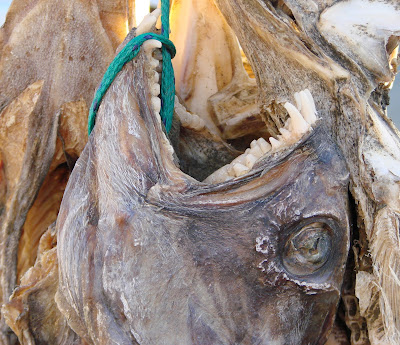 My take-away is that I don't want to encounter any of these guys in the ocean. 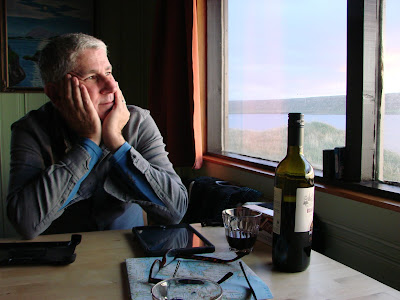 Then back to our little college for a glass of wine and some time spent just watching the ocean and planning the next day's travel. 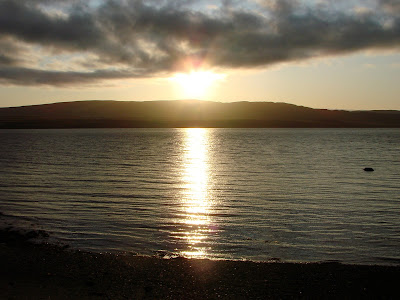 After the sunset, my husband stayed up later than me and woke me around midnight - to see the aurora borealis! None of the photos turned out, but it was mesmerizing to sit, bundled up on the little porch of our cabin, and watch the surreal shifting of the northern lights above us.
Posted by Secret Agent Woman at 9:14 PM