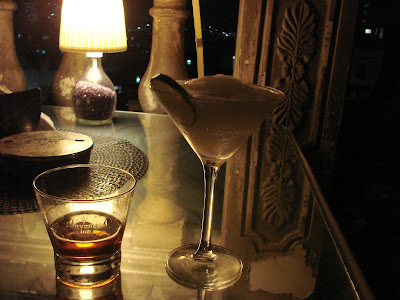 One of my favorite things about travel is trying out the food and drink of a new place. We had our one "fancy" meal the first night in a surprisingly elegant restaurant, La Guarida, in Habana Centro. It took a while to find it - you'd never have known from the doorway that there even was a restaurant upstairs. We didn't have a reservation but they promised to work us in and we had drinks on the rooftop bar while we waited. 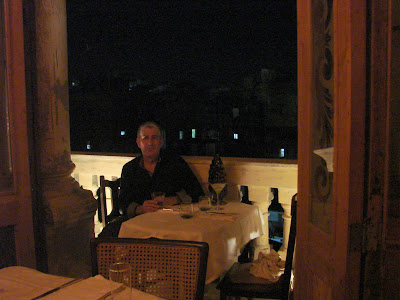 And then, we were seated at a table right in front of a window overlooking the city! Instead of the usual bread, they brought us fried yucca to start. 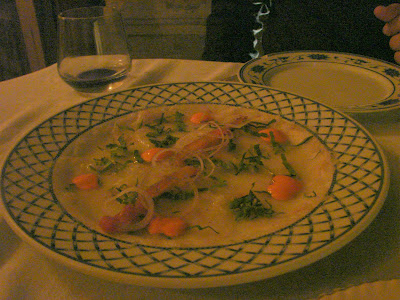 We had snapper carpaccio with tomato tartar, fried taro, papaya lasagna with seafood and citrus compote, lobster and creamy rice. All with a bottle of vinho verde. 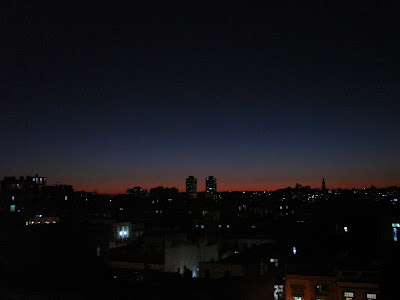 We could see all of Habana Centro from the roof. It was a lovely experience, but there was something jarring about eating a dinner that would cost more than many people there make in a month - the official monthly wage is $25. 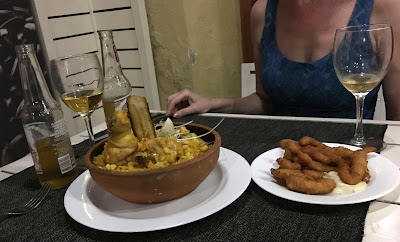 We had decided we'd eat the popular chicken and rice at least once while we were there. Partly because it is just plain fun to say arroz con pollo. We found a little restaurant just off one of the plazas in Habana Vieja, Aronces, that specialized in rice dishes. It was very slow, but the arroz con pollo dominguera we ordered was delicious. We had fried fish with it. The thing sticking out of the bowl, if you are wondering, is a sliver of fried plantain. Our wine glasses actually held beer. Our only choices were Mexican Sol or Dutch Heineken. Every single restaurant we went to was out of the national beer due to a shortage, so we didn't bother with beer after that. 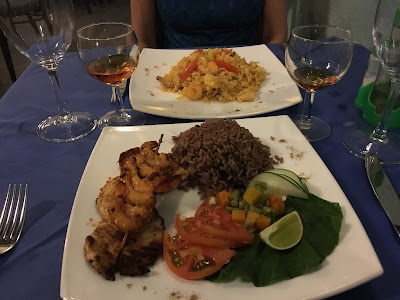 That night we sought out a seafood restaurant, Puerto de Sagua,  in the grittier part of Habana Vieja. We had dark rum while we waited and giggled at the solo hipster traveler who sat across the room drinking a mojito, smoking a cigar and looking pensive. For dinner, seafood paella and a platter of grilled fish, shrimp, and lobster with black beans and rice. Because it was raining and a long walk home, we elected to take a bicycle taxi home. 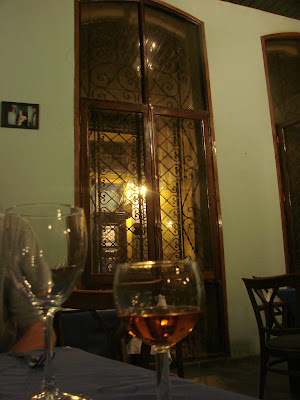 Let me tell you that people drive fast even at night on the crowded streets, there are no streetlights on most roads, and the bicycle taxis do not have lights or reflectors. I have flown in tiny planes low over a rainforest and into a volcano crater, I've ridden in an open land rover with lions and leopards around us, and I've pedaled a water bicycle in a lagoon that had ten-foot crocodiles. As cars passed inches away with nothing between us and them but a canvas cover,  I realized this was the MOST vulnerable I've felt in any transportation in all my travels. 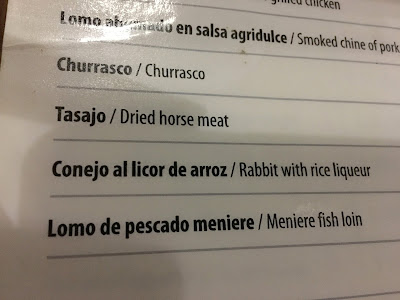 Our last day we popped in to the bar at Hotel Deauville for coffee only. We did not order anything to eat, but I wondered how often they got orders for the dried horse meat. 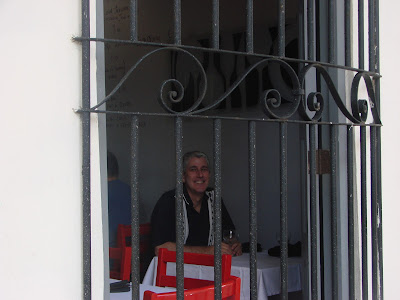 Lunch was in Habana Centro at Castas y Tal. Our table gave us a view of the busy street outside. 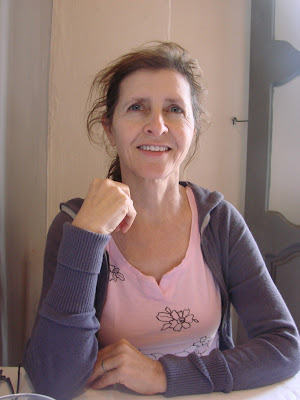 It was cool and very windy that day and I was glad for a little time out of the salt spray we'd walked through along the streets near the ocean. 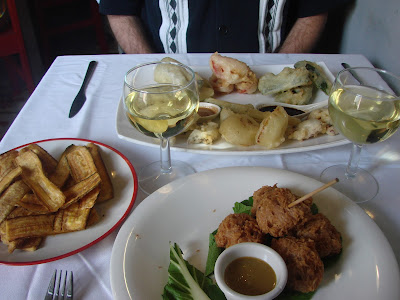 We had malanga fritters, the ubiquitous fried plantains, and seafood and vegetable tempura, with glasses of white wine. Malanga, we discovered, is a root vegetable closely related to taro. To give you an idea of the food prices, that entire meal was about $16. Although Italy still has the best food I've ever eaten, I can't complain even a little about the food we had in Cuba.
Posted by Secret Agent Woman at 7:34 AM