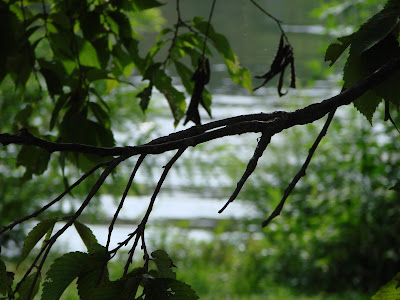 Days 3-5 thoroughly sucked. And I'll get to that in another post, but right now there is something else on my mind: my family. If you aren't in the mood for a rant, avert you eyes now.

I have a great support system. My husband is phenomenal. My children warm my heart. And I have friends who have gone above and beyond for me. But... I still long for support from the family I grew up with. Right after my first surgery, I got cards from most of my siblings, flowers from my mother, and a gift from my stepmother. And after my second, flowers jointly given my two of my sisters and chocolate-covered fruit from my brother. And trust me, I appreciated all of that. And it's true that all of those people have said they wished they could do something, to let them know how they could help.

But here's the thing - none of them live close to me so I don't expect them to actually be at my house helping. And I don't like to ask for help anyway. I'd cut my own throat before I asked someone to send me something, no matter how much I might like it. But I did let everyone know that it helped me to have people check in on me. Did they? Rarely. And when I'd reiterate that I needed to hear from people, I'd be told that no one wanted to intrude. Each time, I'd say again that it wasn't an intrusion to check in with me, that I needed to know people care. And.... [crickets]....

If I text or email one of my siblings, they'll answer. But rarely does anyone contact me first. When I emailed all my sibs to let them know I would have to have chemo, my stepmother felt moved to message my husband and ask why I'd excluded her. In fact, my last message from her had been, "Would love to be able to help but I know some things you just have to wade through yourself." Not exactly an encouragement to stay in touch. So I let her know that I didn't have the energy to exclude anyone, that I was mostly responding when people reached out to me. And then yet another round of an insistence that she just didn't want to intrude, me saying caring about me wasn't an intrusion, and no response on her part.

The most recent example is my chemo. Two sisters I heard from last when I texted them to tell them chemo was going to start in a few days. They responded to say they'd be thinking about me. Nothing since. Another did wish me luck on the day of. Nothing since. And another did check in the day after, but hasn't reached out since. Nothing from my stepmother, and my mother checked in after I got my port placed, responded to a text I sent her and then nothing until yesterday. My mother finally texted to say she'd been thinking about me. I said I hadn't known, and she told me she'd been thinking of me constantly. I texted back that somehow, everyone's thoughts don't actually make their way to me. She ignored that and said she hoped it wasn't awful. I said it had been. She texted, "I've been reliving those days." Which makes it all the more astounding. She remembers her own cancer but can't find it in herself to keep in touch with me at times she remembers were hard. I read that text exchange to my younger son when he came by to visit yesterday and when I finished he said, "But... you're living it NOW." Yeah. How is that a 21-year-old gets what a 79-year-old doesn't?

And I know, none of my siblings have had cancer. I probably wasn't as attentive as I could have been when my mother had breast cancer 25 years ago. I had a brand new baby and a new career and was busy. I understand being busy. But even in the midst of that, I know from my journal that I called her regularly, that I took her grandson to visit when she was doing chemo, that I bought her a cashmere hat to keep her head warm. So even without personal experience of cancer, I knew it was important to make the effort to stay connected.

I've thought and thought about why my family is so disinclined to be involved in my cancer. Maybe for my sisters there's some feeling of whoa-that's-too-close-for-comfort? Maybe not wanting to think about it happening to them? Maybe people perfer asking if there's anything they can do in lieu of actually doing anything? Maybe my cancer is just a blip on the radar? Maybe they figure I'm just the story they'll tell someday about how they had a sister once who died of breast cancer? I don't know. I'm tired of thinking about it and I'm tired of suspecting that my family feels that if they "like" my status update on facebook, that absolves them from the need to contact me personally.

So here's what I'm doing. I've stopped posting on facebook, for one thing. If anyone in my family wants to know how I'm doing, they all know how to contact me. Because I'm also not going to be texting or emailing updates. If no one is asking, I'm assuming they don't really want to know. And I'm turning my focus, as much as I can, to the good.

My husband. My god, did I hit the jackpot with him. He's running on empty these days but endlessly devoted to me. My sons. My older son and I text and he's talking with me again about his life and his new girlfriend. My younger son, a boy with a heart as wide as the world, who texts frequently to see how I'm doing and visits every couple of days. Oddly, one sister-in-law. My husband's brother's wife, who I've met only a few times, has jumped in with a vengeance. Both her parents had cancer and she has made a point of texting me every few days when things are going well and daily when they aren't.  Even my ex-husband, who checks in with me every couple of days to see how I'm doing. My friends, near and far. I get emails and texts and feels so supported by them. I've gotten small gifts in the mail from people I hardly know which provide a bright spot in what is often a difficult day. The friends who are local have ferried me to appointments, texted, brought gifts and food. One friend-of-a-friend talked to me on the phone when I was first facing chemo, then we met for breakfast and then, amazingly, she took me for my port surgery, hugged me before they took me back and was there when I woke up. She helped me dress and then stayed with me at home until she was sure I'd be okay. Another friend brought me a cap for when I lose my hair, another sat with me through an appointment with the first oncologist, others brought us dinners. In fact, a friend stopped by while I was writing this because on a visit home to Georgia she'd passed a boiled peanut stand and knew I liked them. All wanting to know how I'm doing, all willing to hear that it's hard. Blessings, every one of them.

So yes, I know. And I'm deeply grateful. And still, I can't help but wish the people who I've loved and known the longest were there.
Posted by Secret Agent Woman at 9:34 AM