Second verse, same as the first. 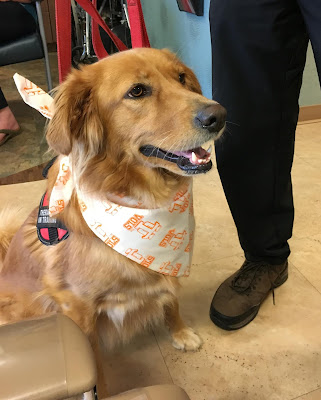 Round 2 was Friday. Two therapy dogs made their way through the crowded waiting room, patiently stopping and soaking in the petting and compliments. The other was a fluffy white Great Pyrenees wearing an orange tank top. Yes, football game day here. My oncologist had on an orange tie.

The routine is blood work first. I turned my head and held tissues over my eyes until the kind nurse was completely done accessing my port, even though this time only hurt for a second. She told me I did great and I shrugged. She said, "No. Look at me. LOOK at me (pointing to her eyes). You did fantastic. Say it." I was laughing by then and dutifully said, "I did fantastic." I quickly offloaded the bag of blood samples she'd handed me to my husband so I wouldn't have to look at them as we walked them to the lab. Fortunately, my WBC was within range, so I was good to go for that round of chemo. 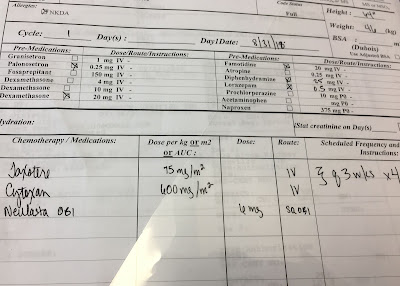 Next up, the visit with my medical oncologist. He asked how things had been going, noting that he hadn't heard much from me in between rounds. He said, "You're smiling, you must be feeling okay!" He also told me he would be out of town three Fridays from now and and offered a few options: I could push the next round back to the following Monday, wait an extra week if I wanted to keep it on Fridays, or keep my scheduled appointment and see one of the NPs. I told him I'd like to push on through and stay on schedule. He said he didn't blame me and since I was doing well, I could skip seeing anyone and make it a shorter visit and then we'd meet again in 6 weeks. I liked that plan. He also asked if I felt like the ativan in my IV was adequate, adding, "Because I could drug you through to next Tuesday." That made me laugh, but I told him it was fine at the low dose - just enough to relax me a little. 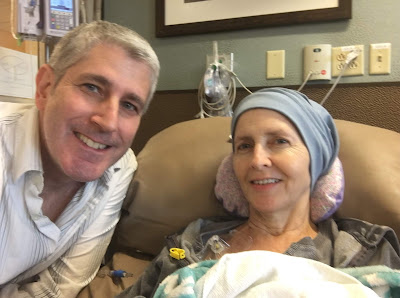 Because during chemo I eat lunch, I talk a little to my husband, but mostly I doze or look idly around the room. I did plug into my iPad briefly to listen to music while they tried several times on both arms to get one man's IV started. This is nightmare material for me and I can't watch or listen. They were able to infuse the taxotere a little faster this time because I hadn't had any allergic reaction the last time. The total infusion was only three hours instead of four this time. The snap of the neulasta injector still surprised me. I'm guessing I'm going to curse under my breath each time. But I am learning and when it went off at home last night, instead of just lying there feeling the sting of it, I watched old tv shows to distract myself. Afterwards, my husband had made new potatoes with sour cream and caviar and it was nice to have a treat waiting.

I know my worst days for this round are still ahead, but I also know I'll get through it. The weirdest part? Seeing my balding head in the mirror and thinking about how much I look like my Dad.
Posted by Secret Agent Woman at 11:53 AM