Friday found us heading out on a road trip to meet some family on either side. First up, Kentucky. 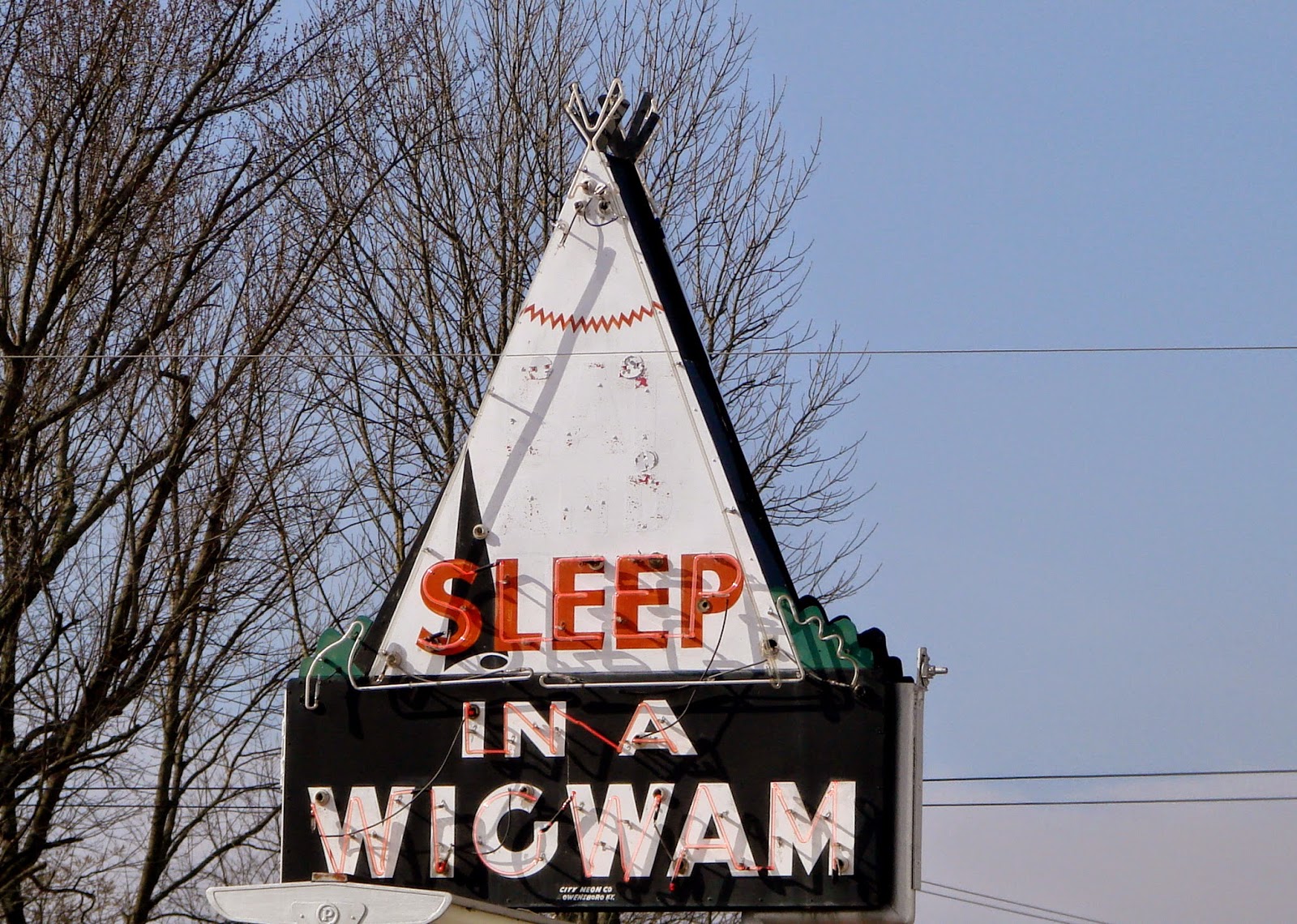 We left after work Friday with a plan: Sleep in a wigwam! 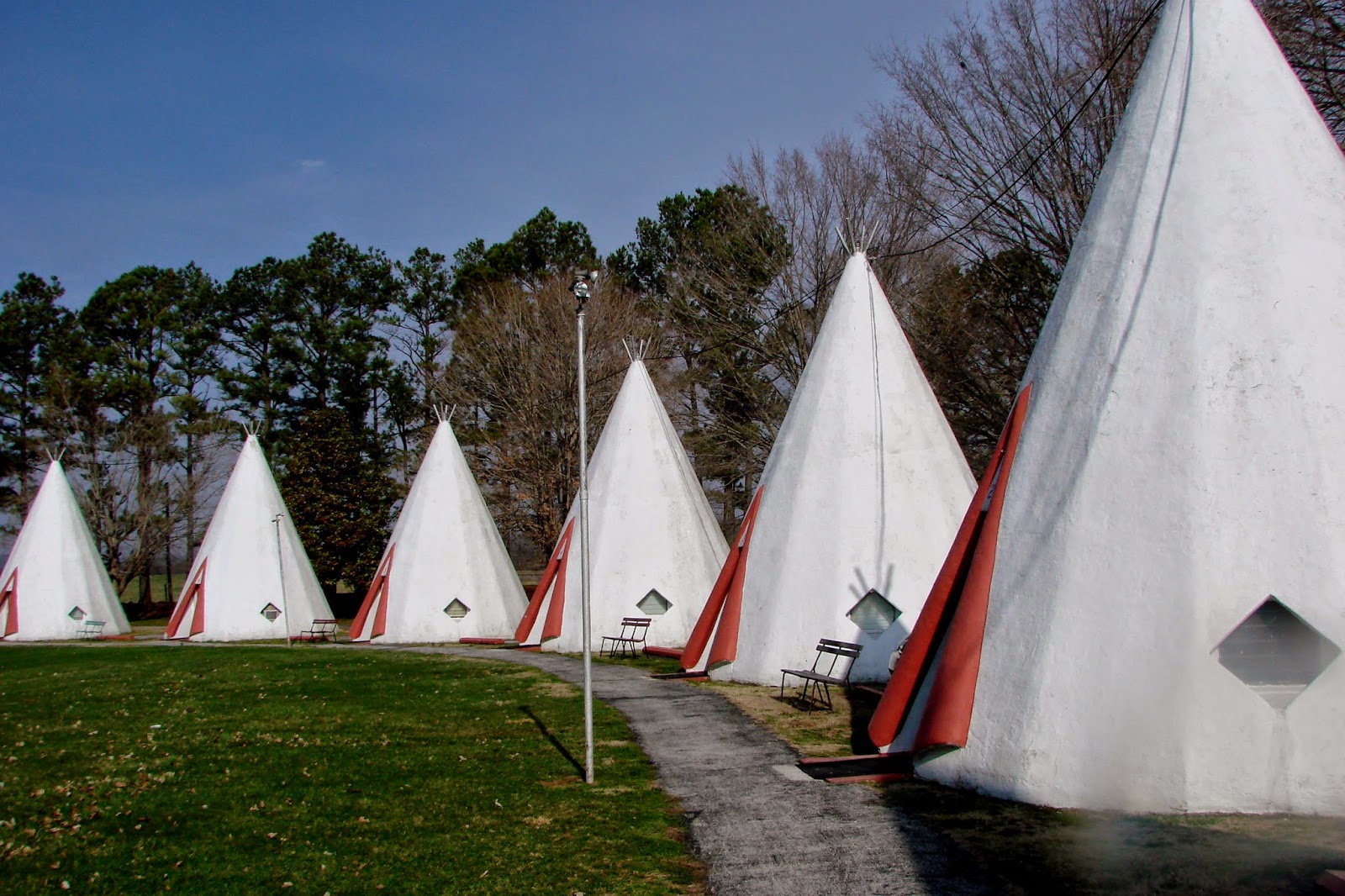 That's right, a cement wigwam near Mammoth Cave, Kentucky. Well a cement tipi rather than a wigwam, which is a domed structure. But who are we to quibble over semantics? It's pure kitschy Americana, and we were in. 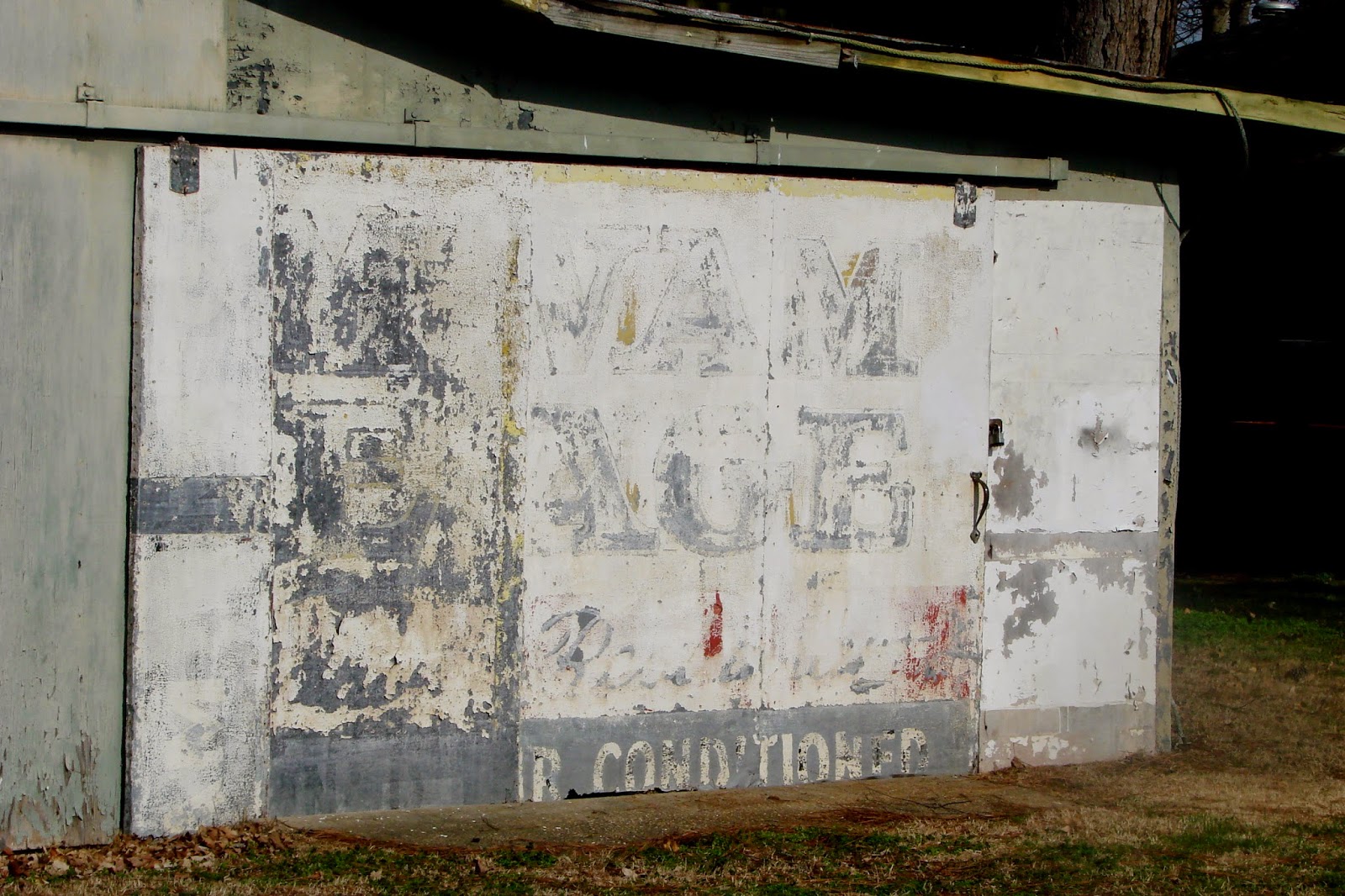 The old sign on the garage is almost illegible, but you can see that air conditioning (little window units) was a selling point. The first Wigwam Village was built in 1933 in nearby Horse Cave, Kentucky, but replaced with this one in 1937 in Cave City. There were a remarkable number of old school motels along the highway of that town, serving visitors to Mammoth Cave. There are only three remaining Wigwam Villages of the original 7 that were built around the country in the 1930's and 1940's. 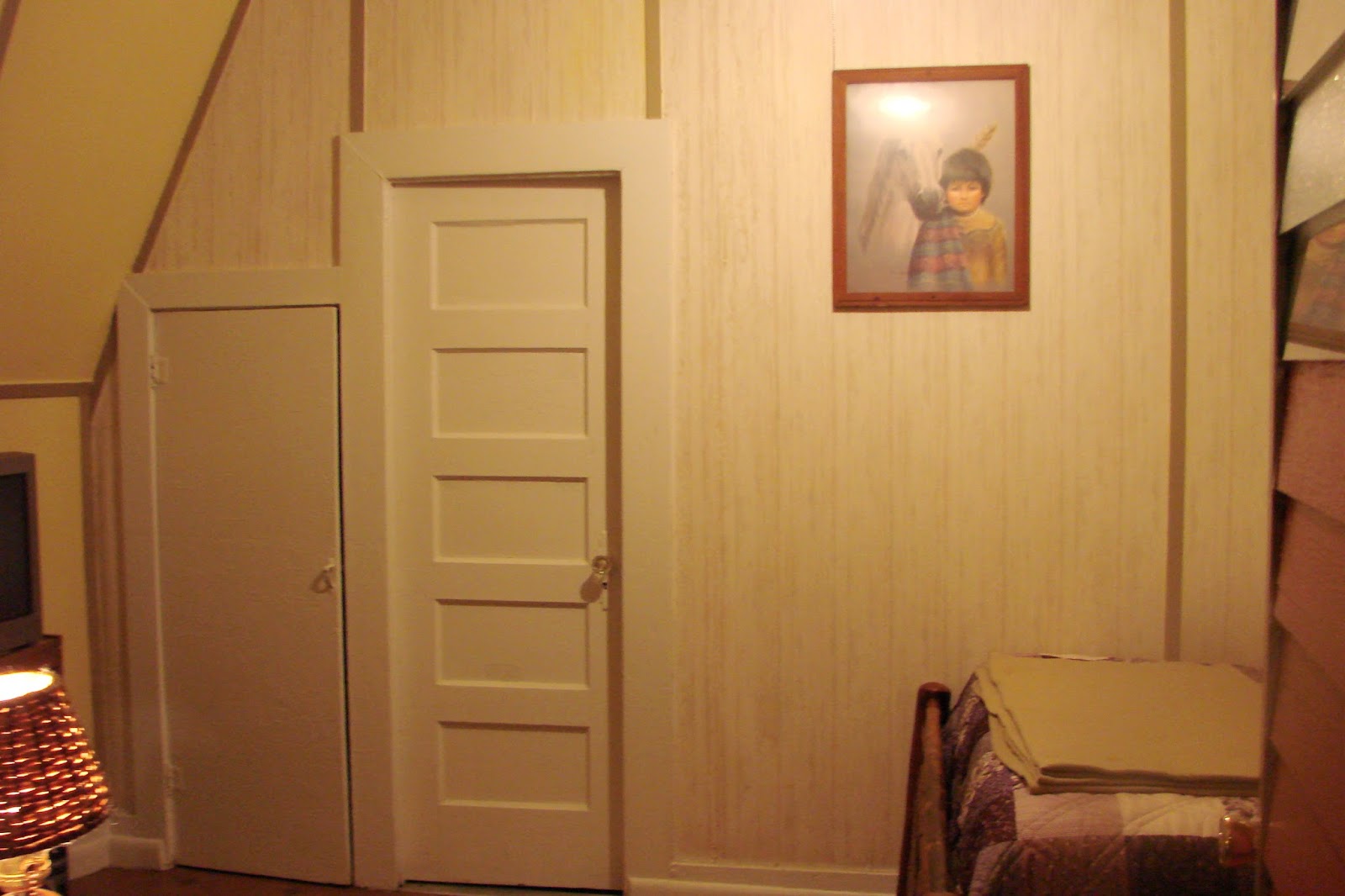 Each tipi is 14 feet in diameter at the base, and has a tiny bathroom in the back and minimal furnishings (all original rustic-style hickory furniture - double bed, chair, vanity and lamp). One of the best things about this place was that although it is all in American Indian theme, it was run by an actual Indian. We checked in late so we had to sign in at the owner's house and sat with him in his living room, with curry on the stove and Bollywood on the television. 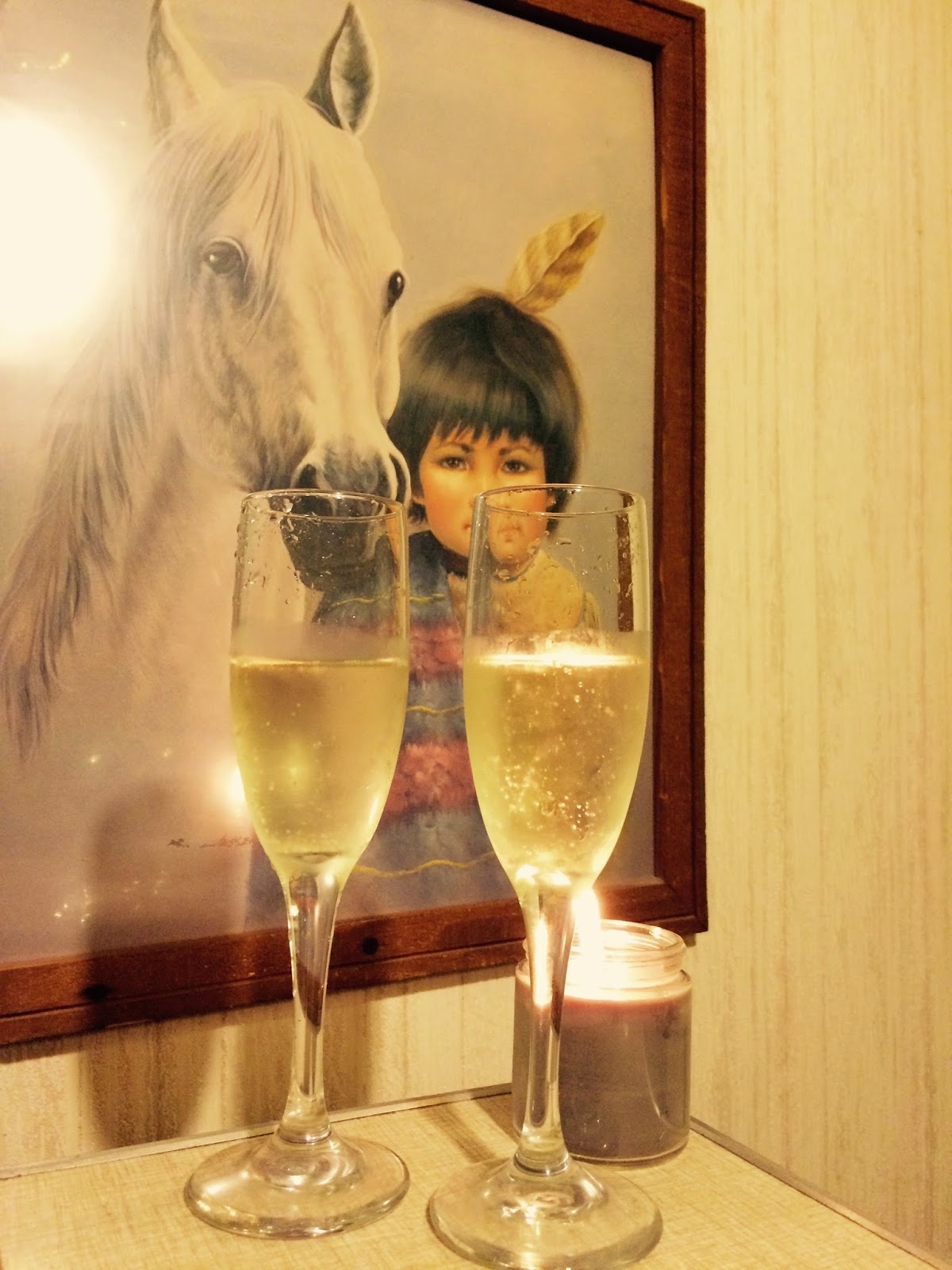 And of course, there was "art" on the wall of the tipi of a somber boy with what seemed to be a feather stuck directly into his head and a horse leaning over his shoulder. Whispering to him, threatening to bite his ear? It wasn't clear. But we loved it. We toasted the vernal equinox with champagne, showered in the strangely slanted shower stall and giggled about the hokiness of it all. 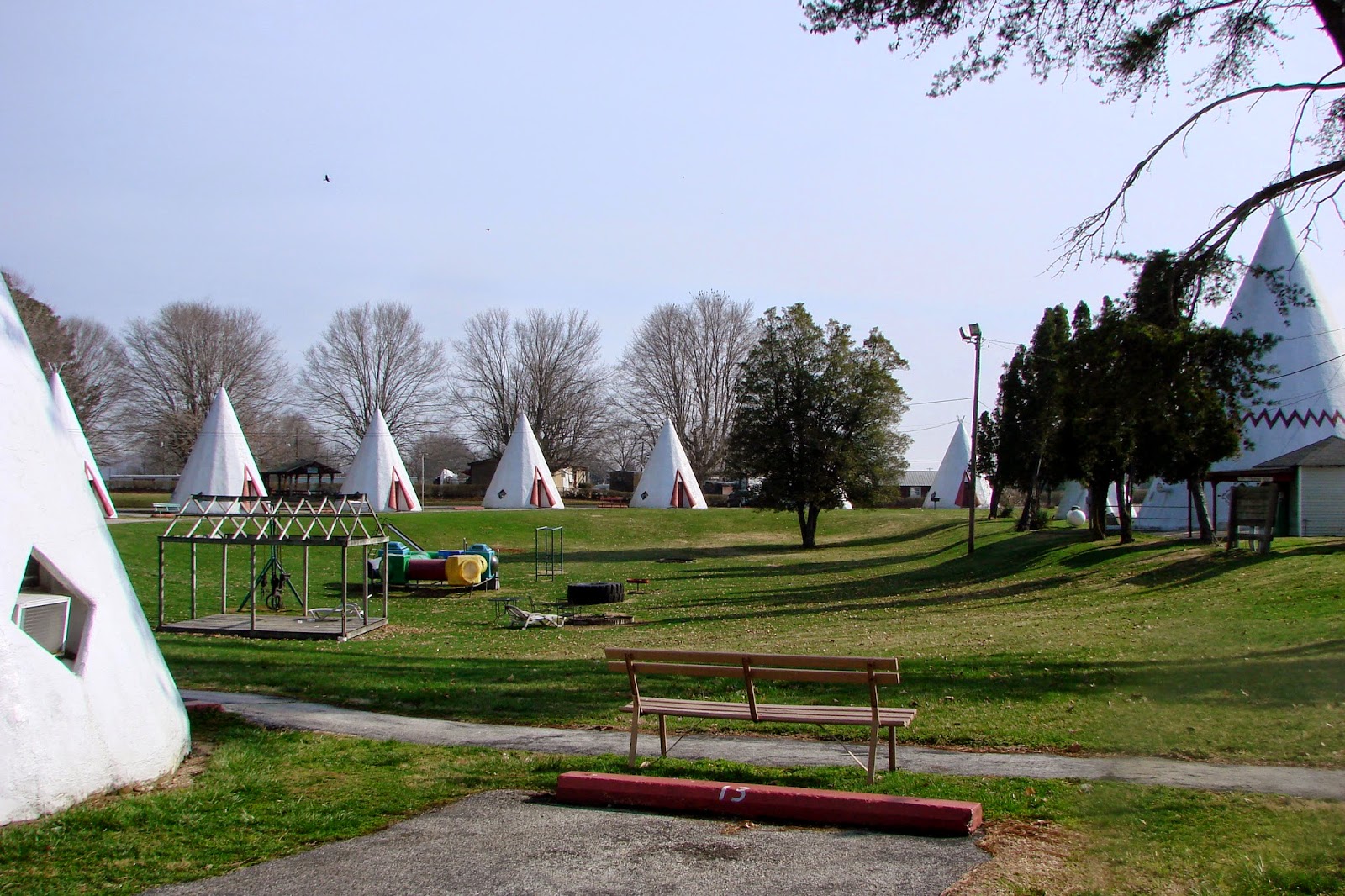 The evening there were kids playing in the playground and a fire in the fire pit. The cars had license plates from a variety of midwestern states and the owner told us that he was surprised to discover people come from all over the world to stay here. That big tipi on the right is the gift shop (and former restaurant) but it was closed when we left. I have to admit, I'm a bit of a sucker for silly Americana. 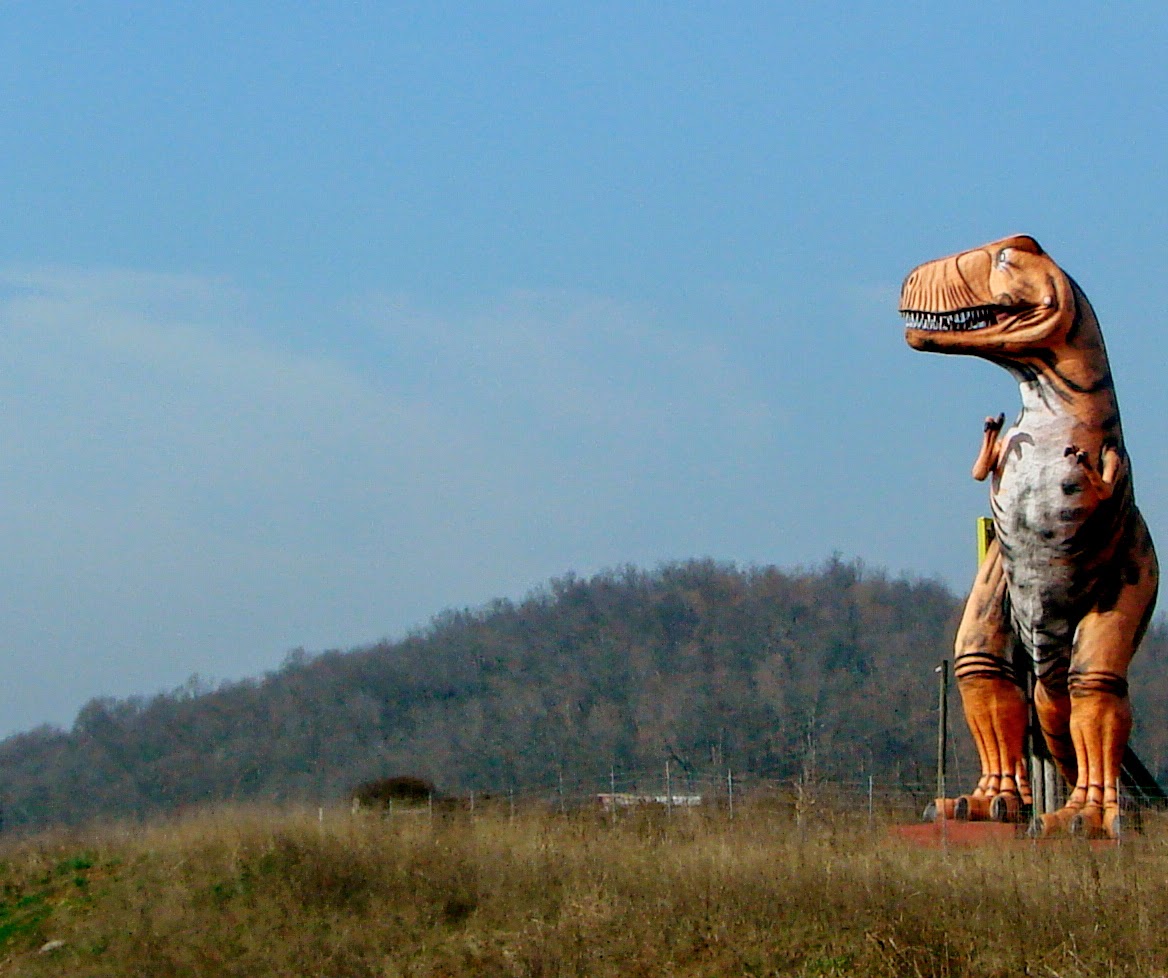 After a cup of coffee in the tipi the next morning, we left to head farther west in Kentucky, where the dinosaurs still run free. And where we passed several hand-lettered religious signs including a gem that said:

You know things are bad when even Jesus is discouraged. 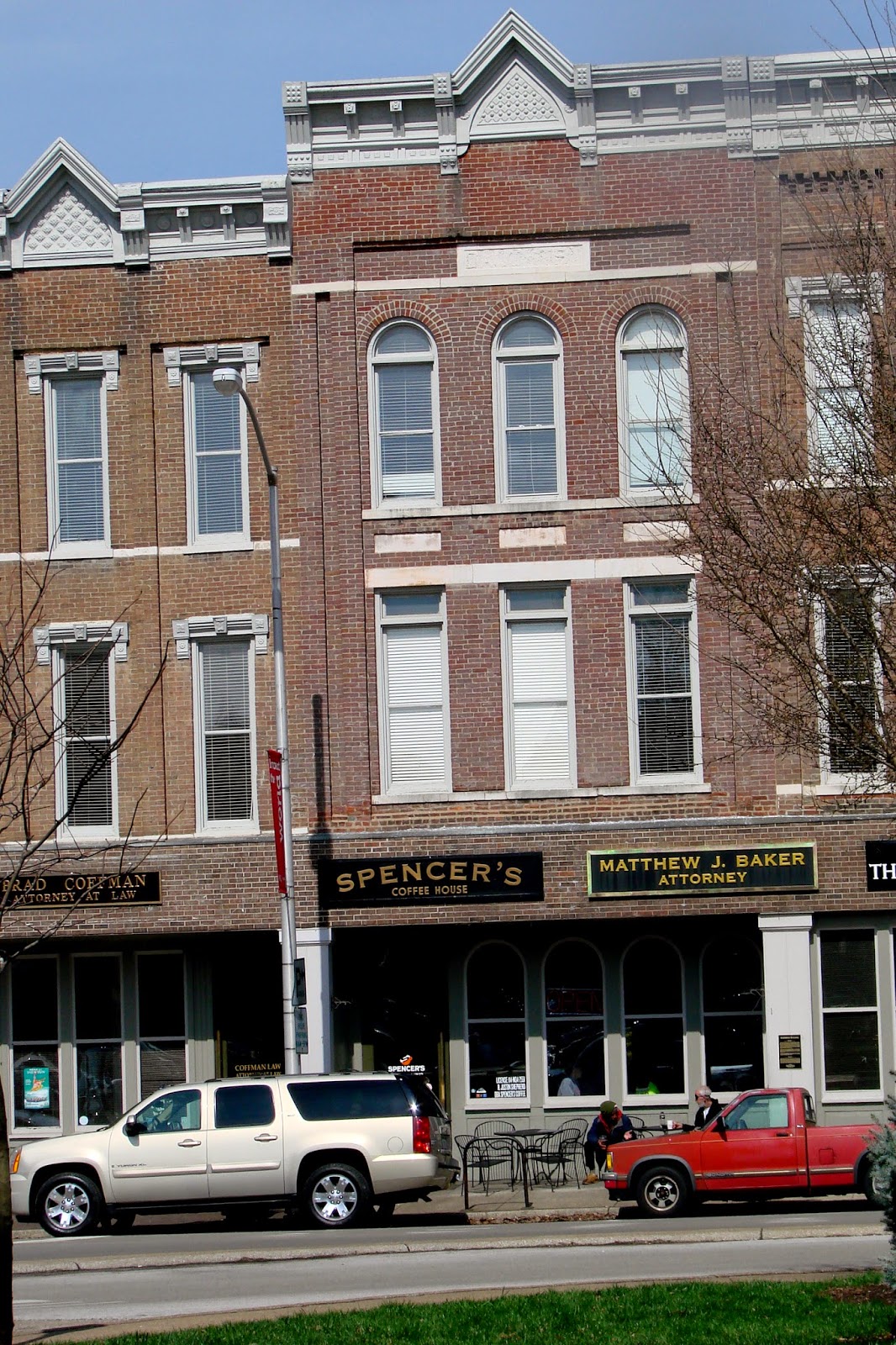 Breakfast in Bowling Green, which had several little restaurants around the main square. It was a beautiful day and I'm so happy to be out in sandals again. 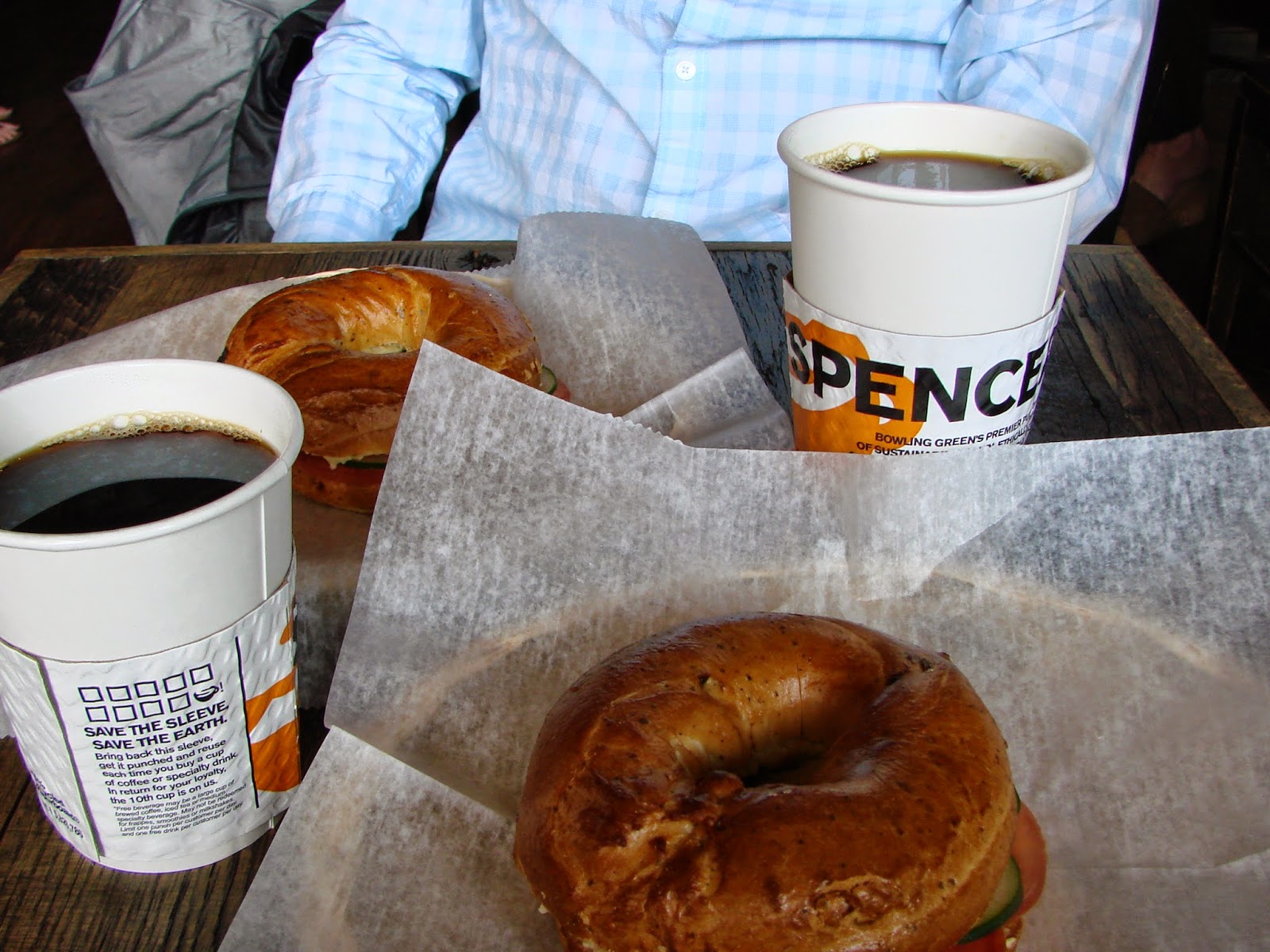 The coffee shop we settled on was the sort of place with a variety of people from tattoo-decorated college kids to a pair of grandmotherly women knitting and chatting. This bagel was called a "Humanitarian," if that tells you anything about the sort of coffee shop it was. Tomato-basil bagel with tomatoes, cucumbers and hummus. I though it needed lox, but I always think bagels need lox. 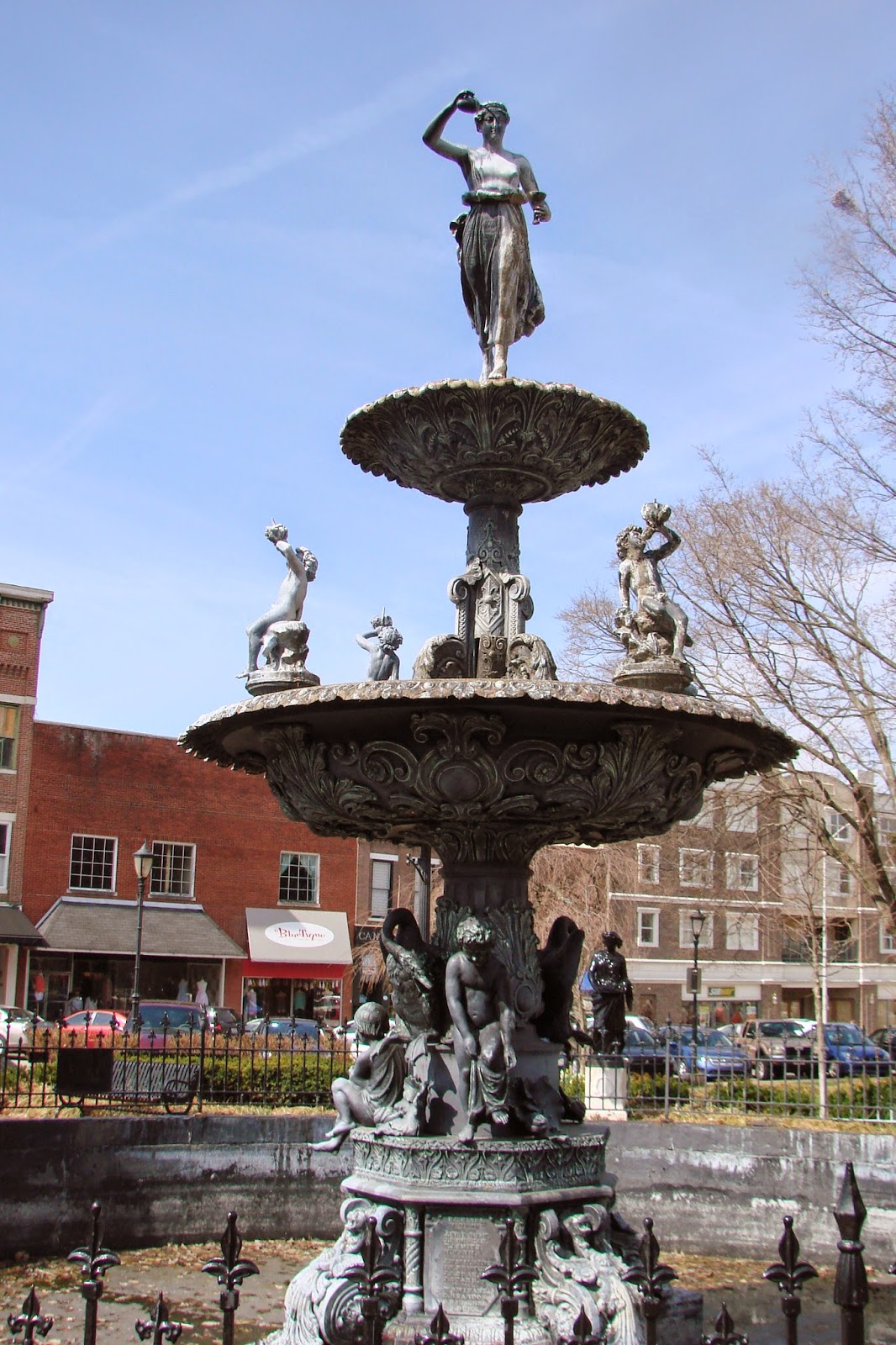 We walked around the little park for a bit before getting back in the car to head northward to visit with his mother who still lives in the house the family bought new in 1963, before my boyfriend was even born. As a Navy brat who moved from station to station on a regular basis growing up, I don't have the same sense of "home" so I'm intrigued by the concept. I can't decide whether I like or hate the idea. At lunch time, I suggested I stay to talk with his mother while he ran out to pick up food, saying I wanted a chance to learn all his secrets. Sadly, however, he is devoid of a sinister history.  At least that his mother was wiling to admit to. But we did talk about raising boys and gossiped about the neighbors. When we left, she pronounced me a "keeper." 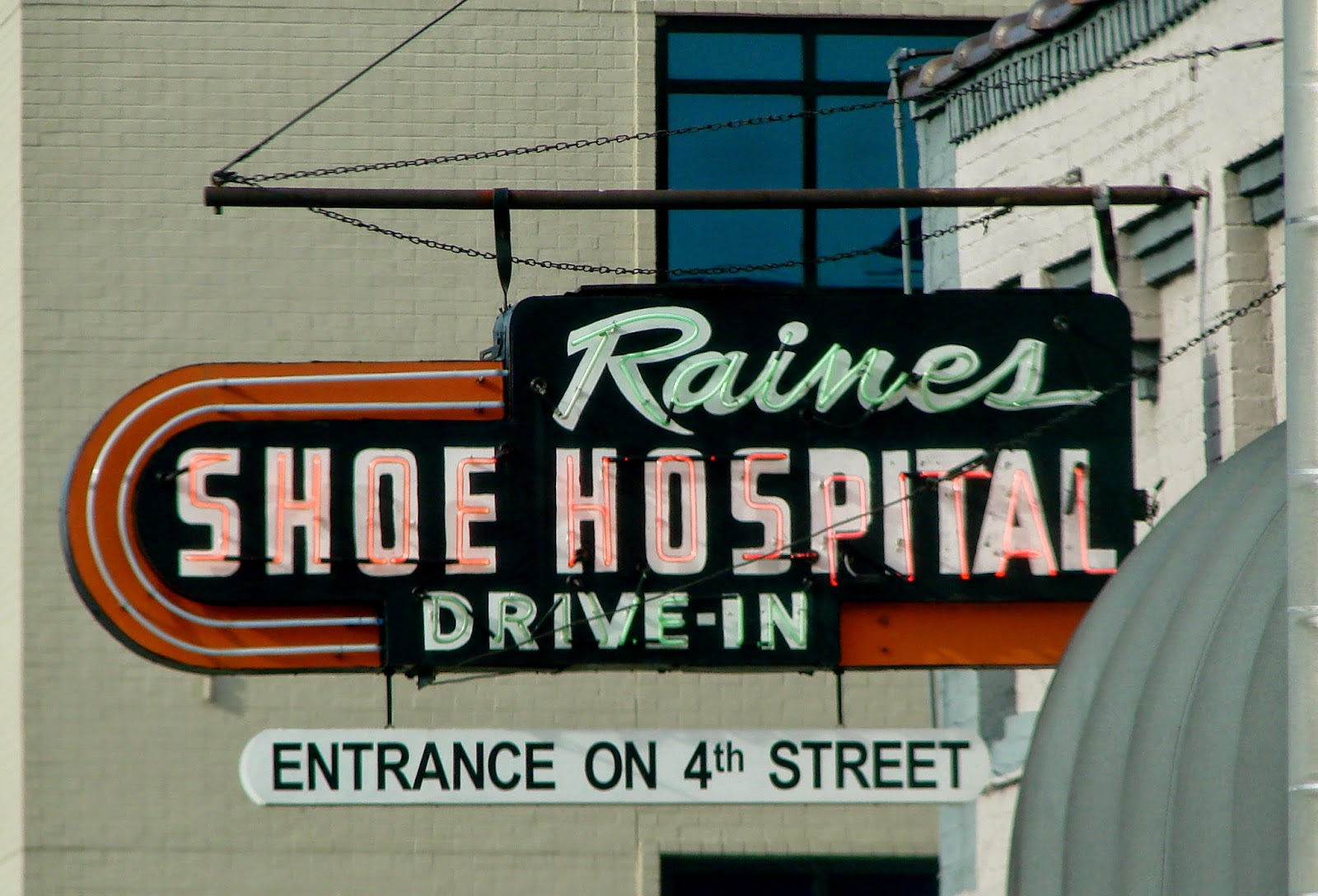 Then it was time to leave, past the hospital for shoes (because what town doesn't have a drive-through shoe hospital?), and southward through the rolling hills to Nashville.
Posted by Secret Agent Woman at 7:22 PM