We did get some sight-seeing in. 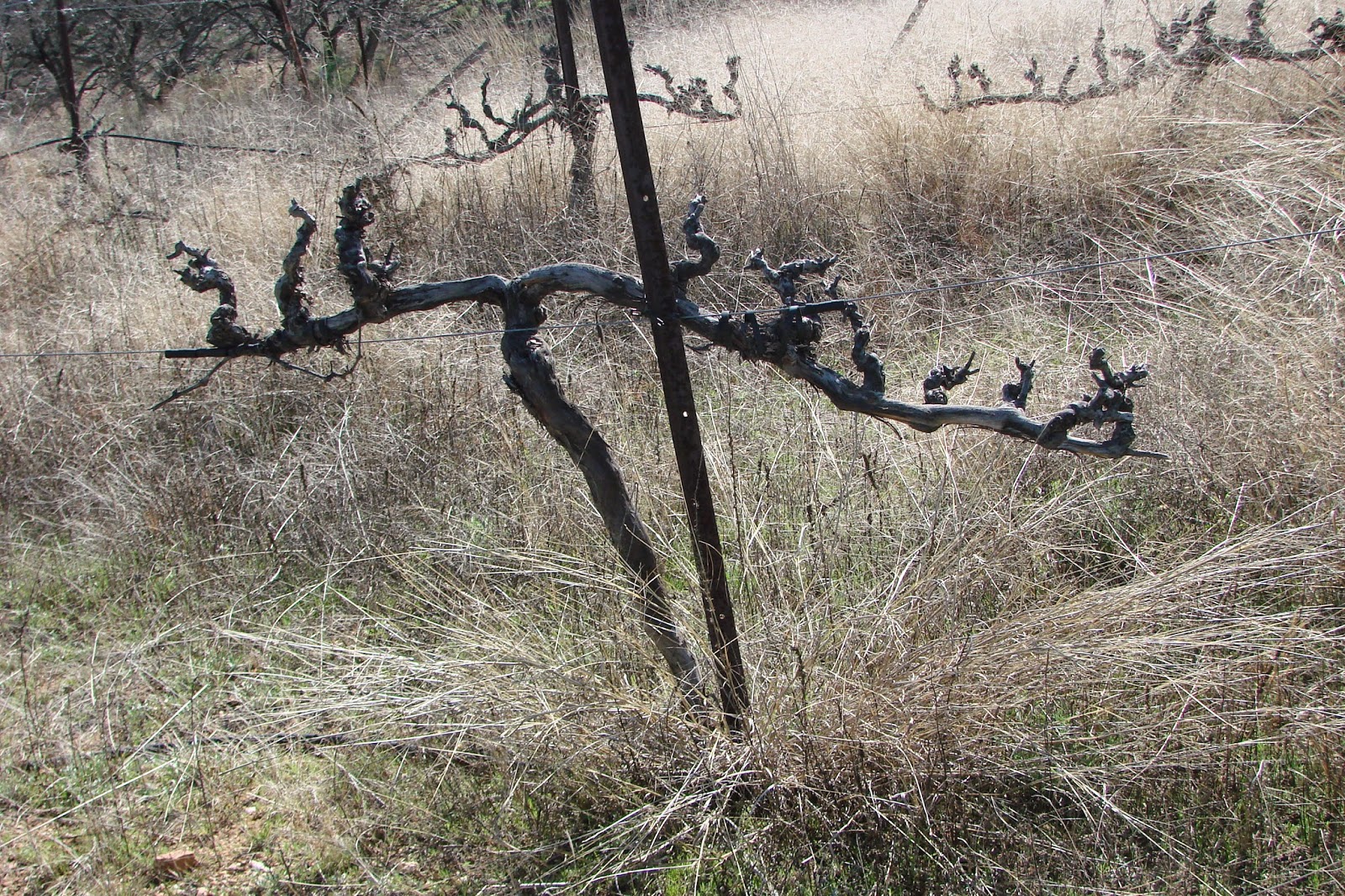 Like visiting an abandoned vineyard that is on the Refuge's property. The vines are now blackened and dead, which just seems sad to me. 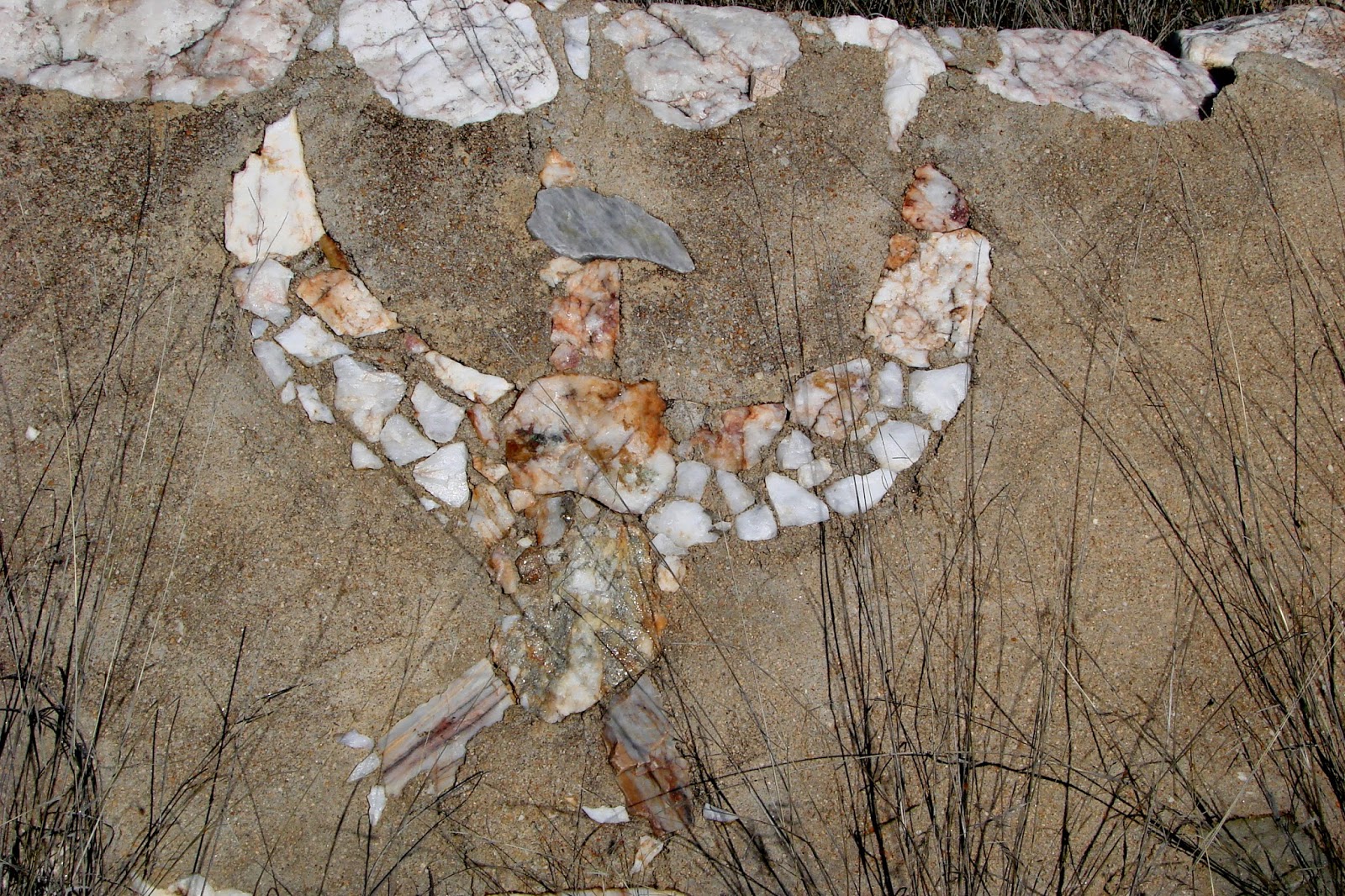 There were mysterious stone circles at the vineyard, many with in-laid designs. This was my favorite - it looks like the bird is dancing. The group leaders made a point of taking us to see something interesting every day and providing good food and wine every night. On only one night was the vegetarian option a bit of a disappointment. I happened to be sitting across from one of the other women not eating the roast and when I saw jello on her friend's plate, I asked fearfully if jello was the dessert. She started giggling because she said I looked like I'd just discovered there was no Santa Claus. I started giggling because she was and we soon were laughing so helplessly that we were distracting from that night's presentation and had to stagger out of the lodge. You know the kind of laughter where just when you've managed to get yourself under control, it starts up again? That kind. The middle schooler in me never grows up. 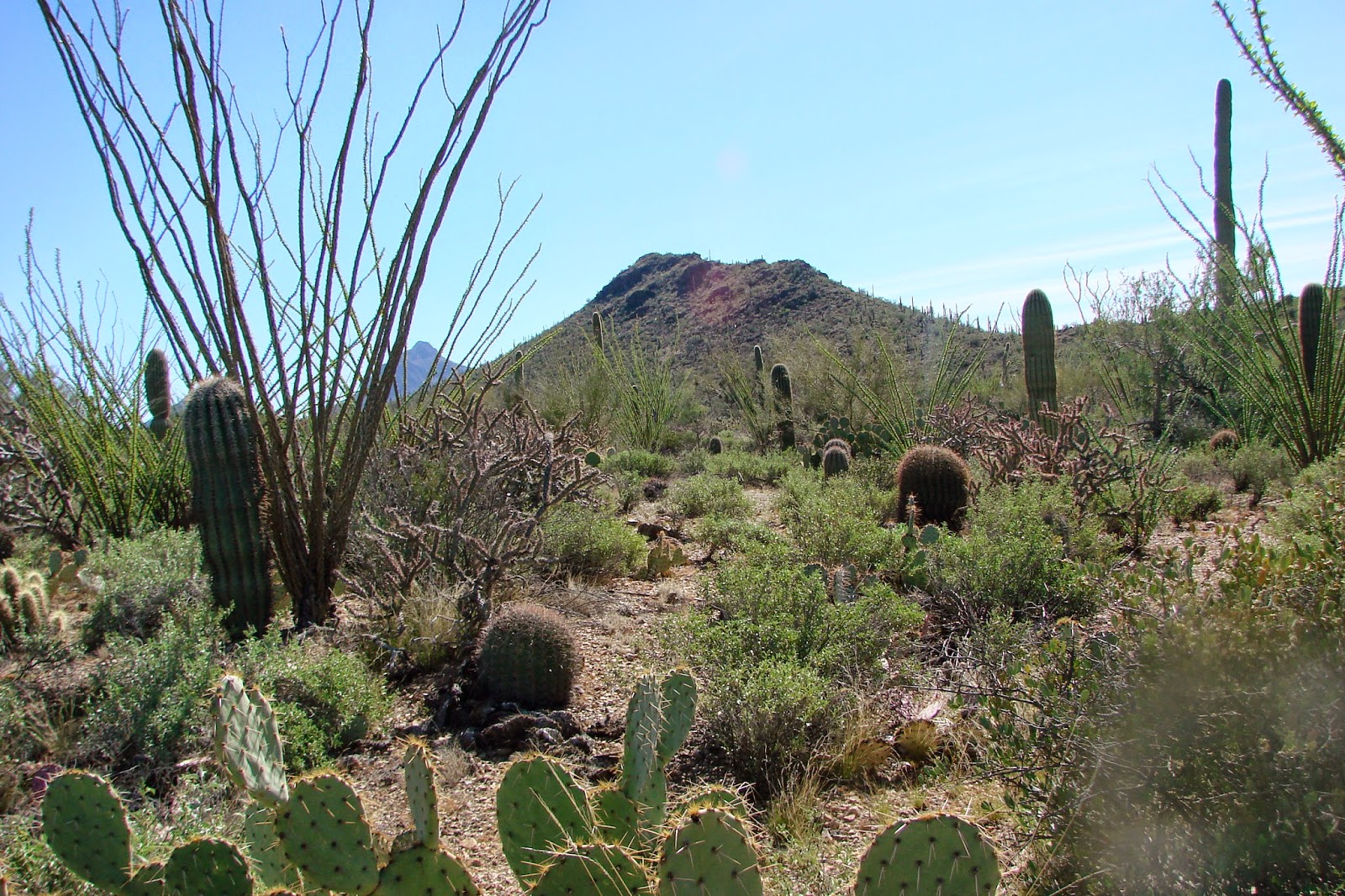 After two full days of work, we got Wednesday on our own. I teamed up with a couple of people to go visit the Sonoran Desert museum. It's really more of a zoo and botanical garden, featuring native plants and animals. Which means plenty o' cacti! 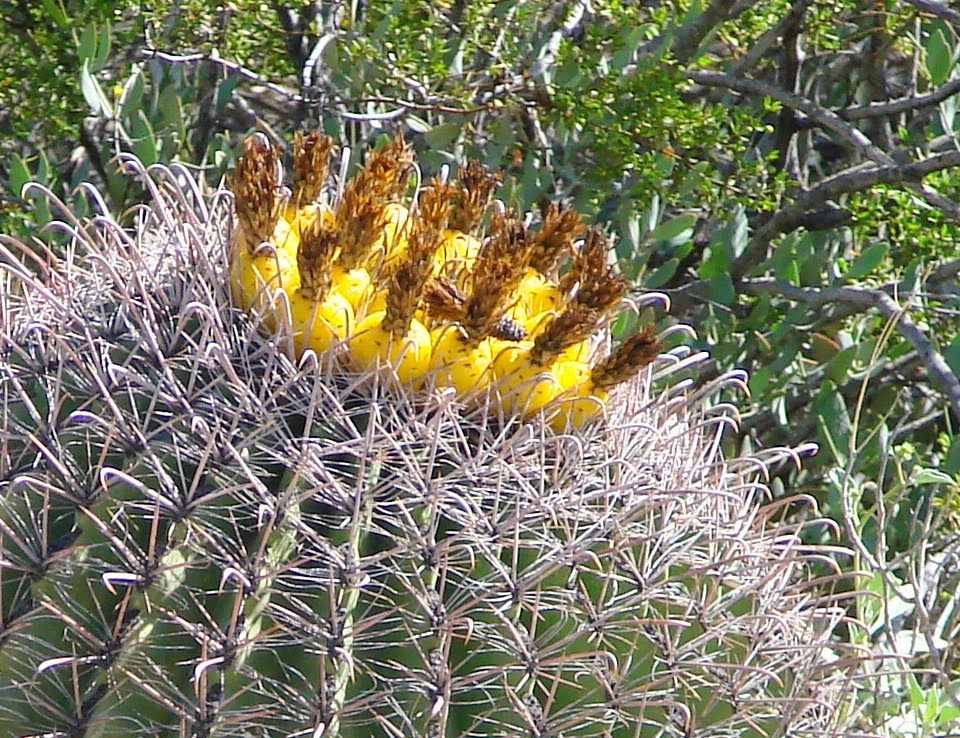 The fishhook barrel cactus. Like the prickly pear, its fruit can be used for candy and jelly. We were sent home with a little jar of prickly pear jelly, in fact, at the end of our trip. It is sweet and reminded me a little of quince jelly. 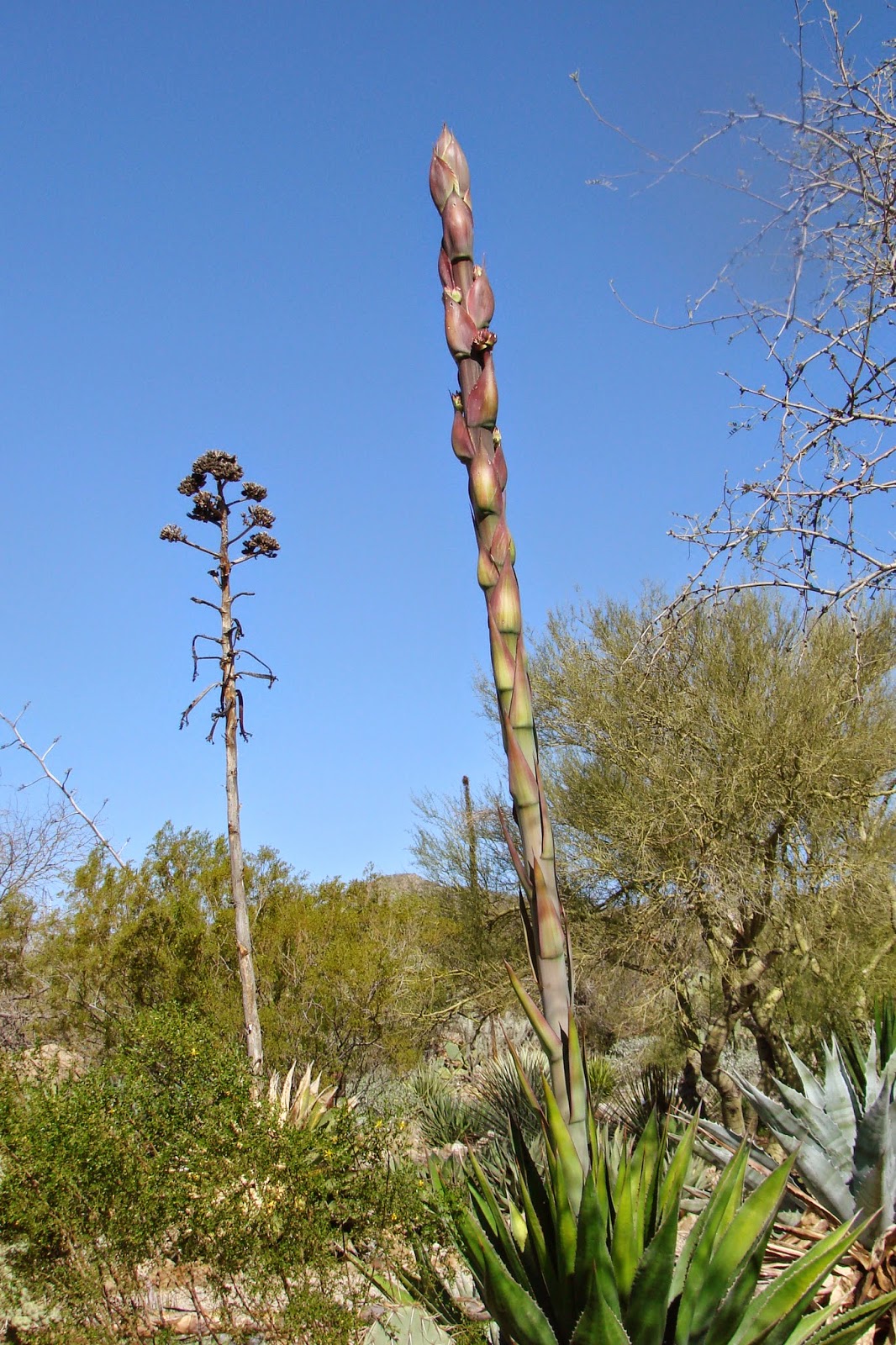 Agave, the plant used to make tequila, is everywhere. Also called century plant, it doesn't flower until the end of its long lifespan. Then it sends up a tall asparagus-like stalk (foreground) that dries out as the plant begins to die (background). 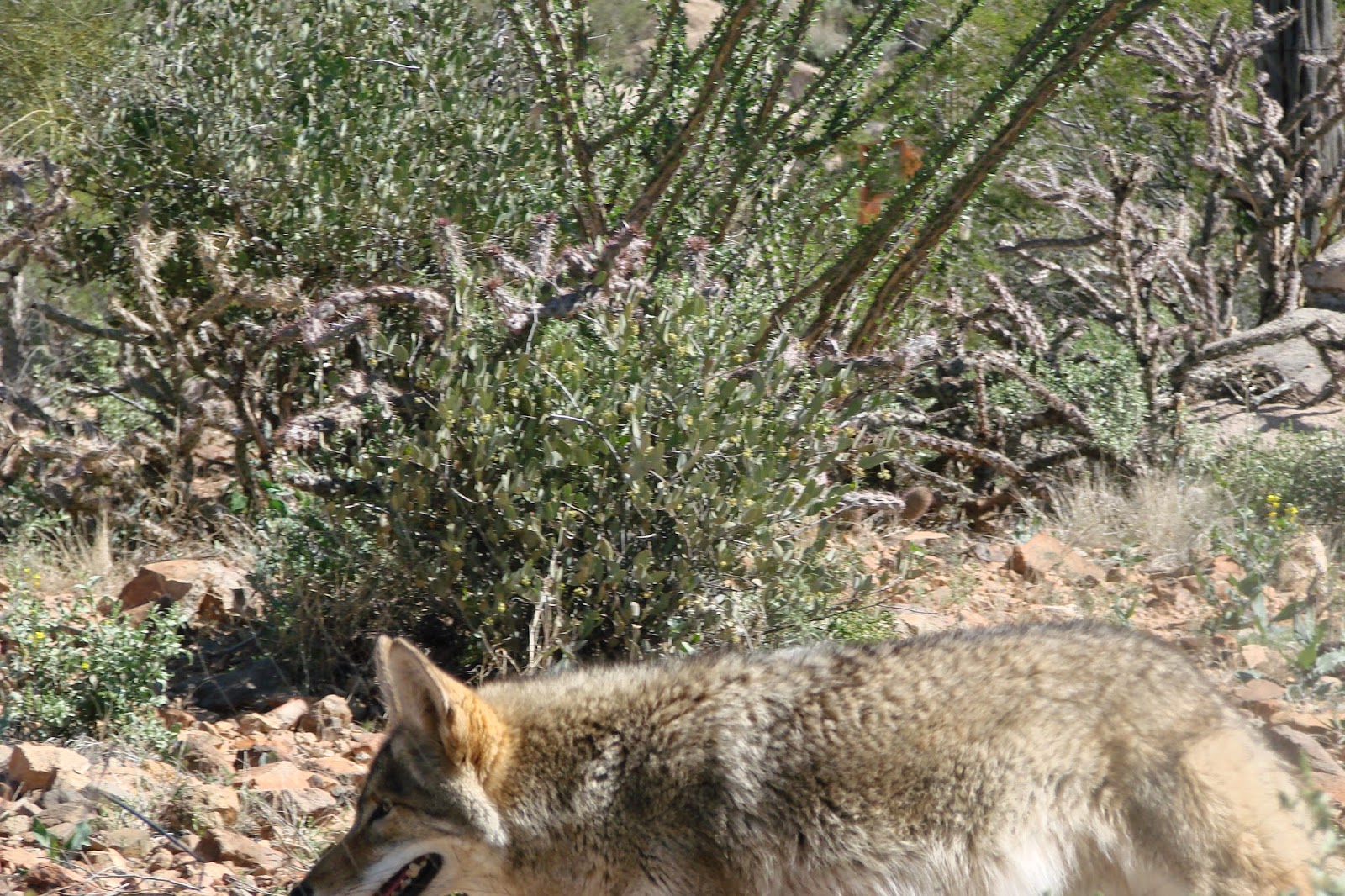 There were also animals in enclosed spaces. Wolves, bobcats, prairie dogs and so on. Near the javelina enclosure a woman told us that you could hardly see the javelinas head on because they were so thin. She made point of saying this several times. And so we had to laugh when we finally saw them- they were actually sizable creatures and not easy to miss. She described them as if they might be like flounders seen on end. We have coyotes where I live, but I rarely see them. Here, in addition to seeing them at the museum, I saw them a couple of times crossing the road. Aside from coyotes, the only other big animals I saw in the wild were mule deer and pronghorn antelopes. 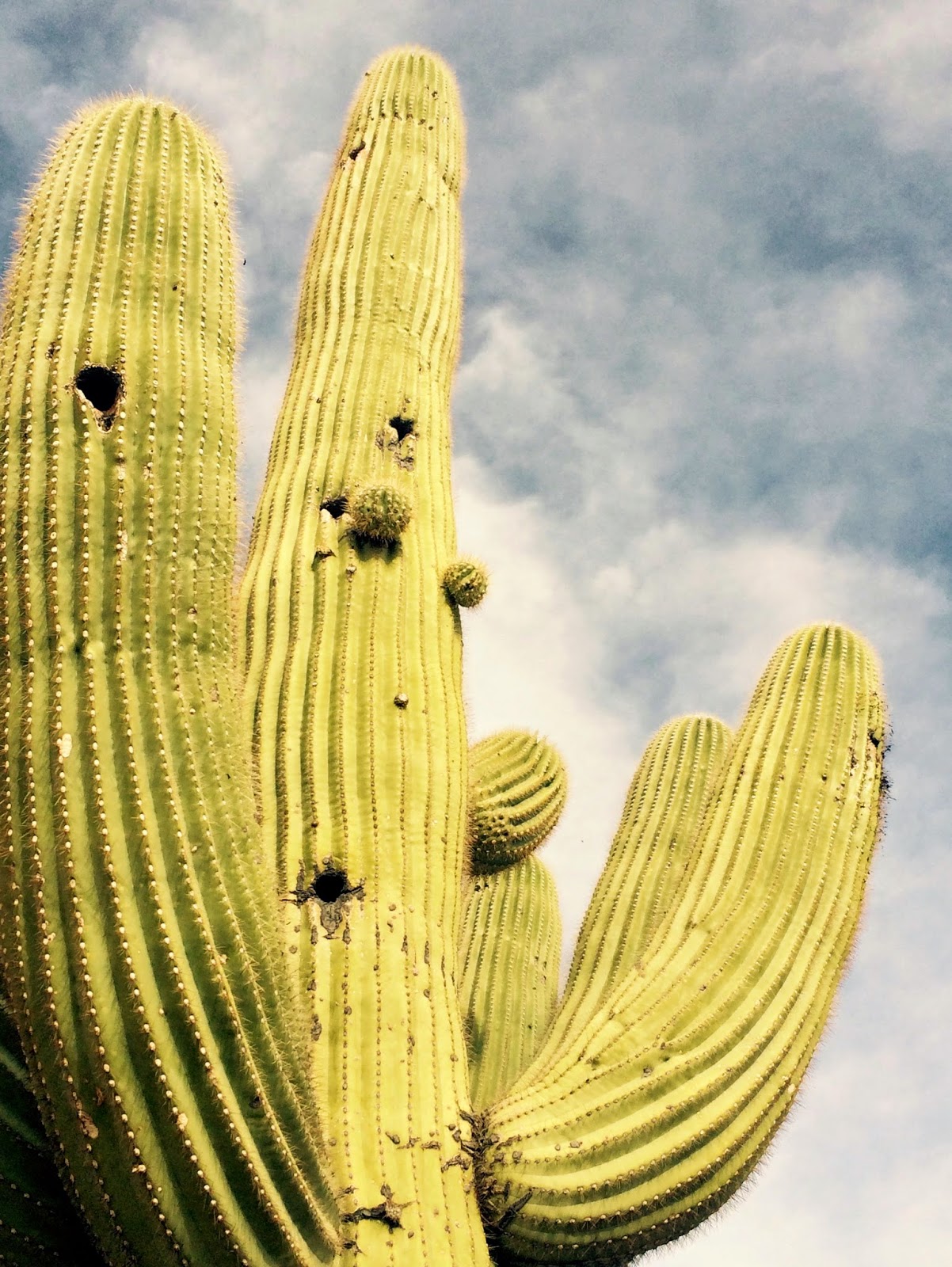 I was especially taken with the saguaros. I learned that woodpeckers make the holes in them and that later other birds, like tiny elf owls, use them as nests. Saguaros grow very slowly - only an inch or so their first year - and straight up until they are between 50 and 100 years old, and then some develop their arms. They typically live to be 150-175 years old, and get as tall as 50 feet high. 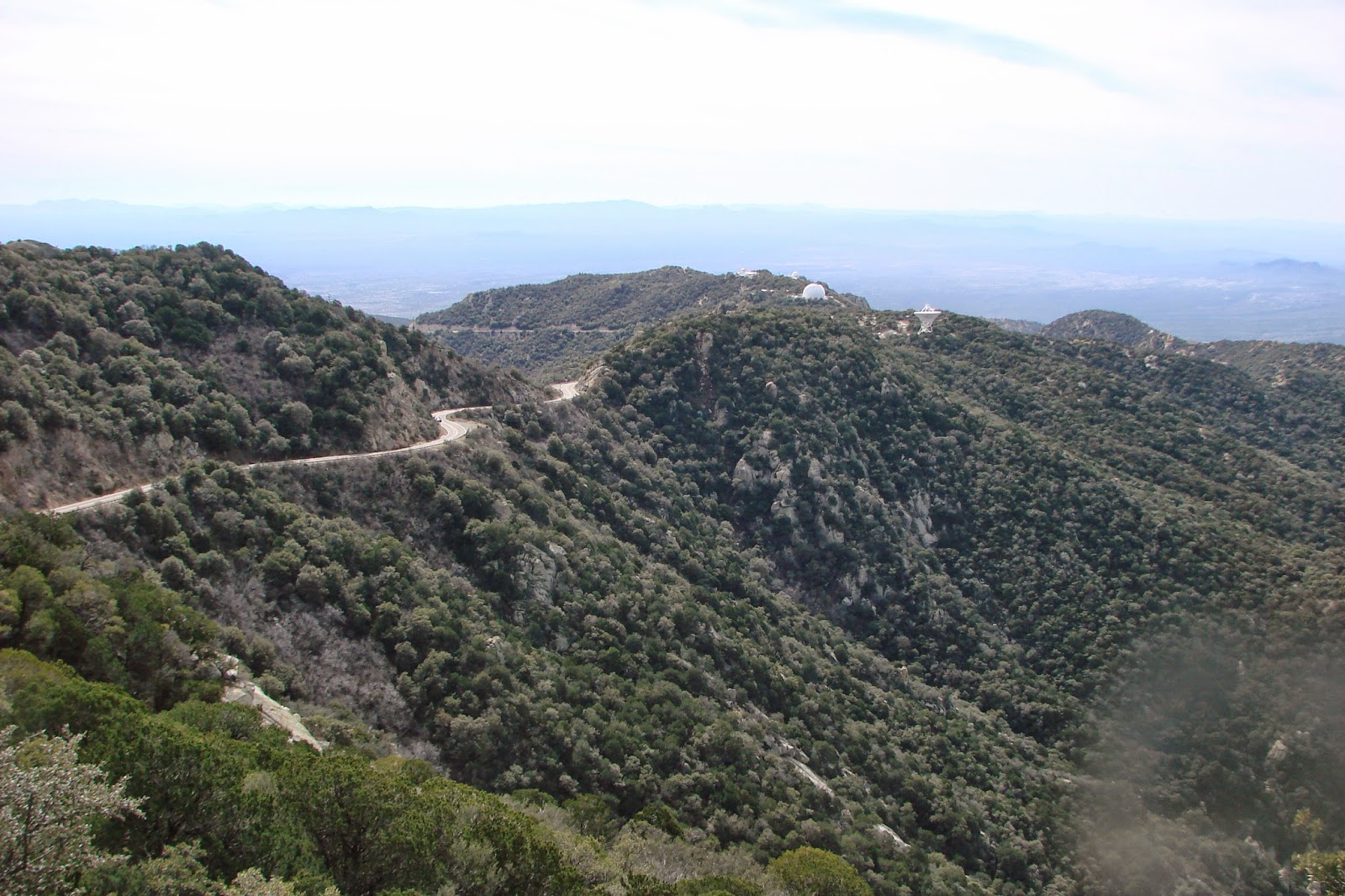 After walking around the Desert Museum, we headed up to Kitt Peak to see the Observatory. It is located on the Tohono O'odham Indian reservation, and Kitt Peak is the second most sacred spot in that culture next to Baboquivari Peak. (One of the local volunteers who worked with us was telling me about the Tohono O'odham and I asked if he could spell it. He smiled and said, "Nope.") The national observatory worked with the tribal elders to set things up in a way that would respect their ancestral lands, and Native Americans are given preference for jobs there. 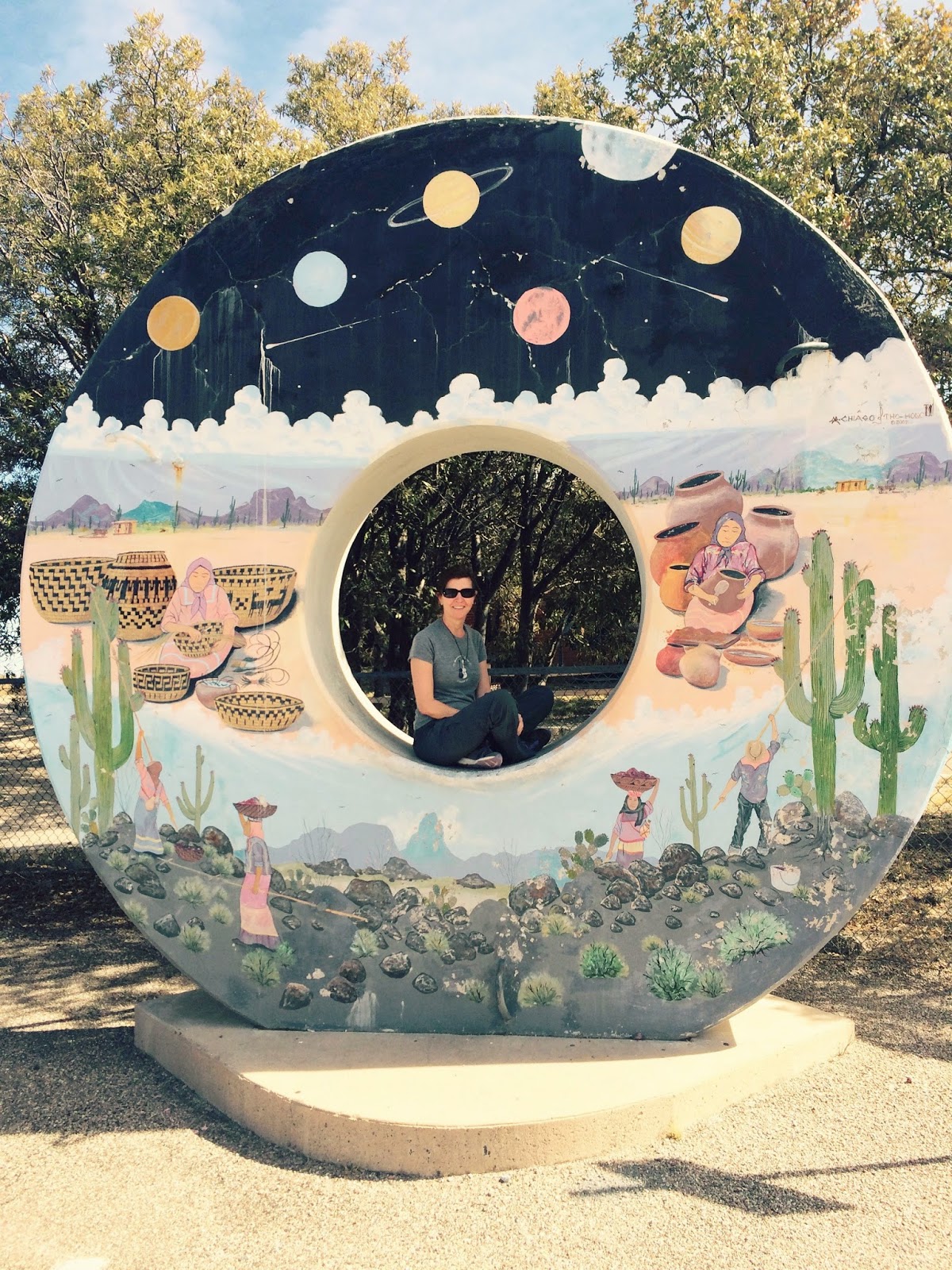 This mural-covered stone was made the same weight and dimensions of the 4-meter lens in the largest telescope so it could be used as a surrogate in building during the three years it took to make and polish the glass lens. 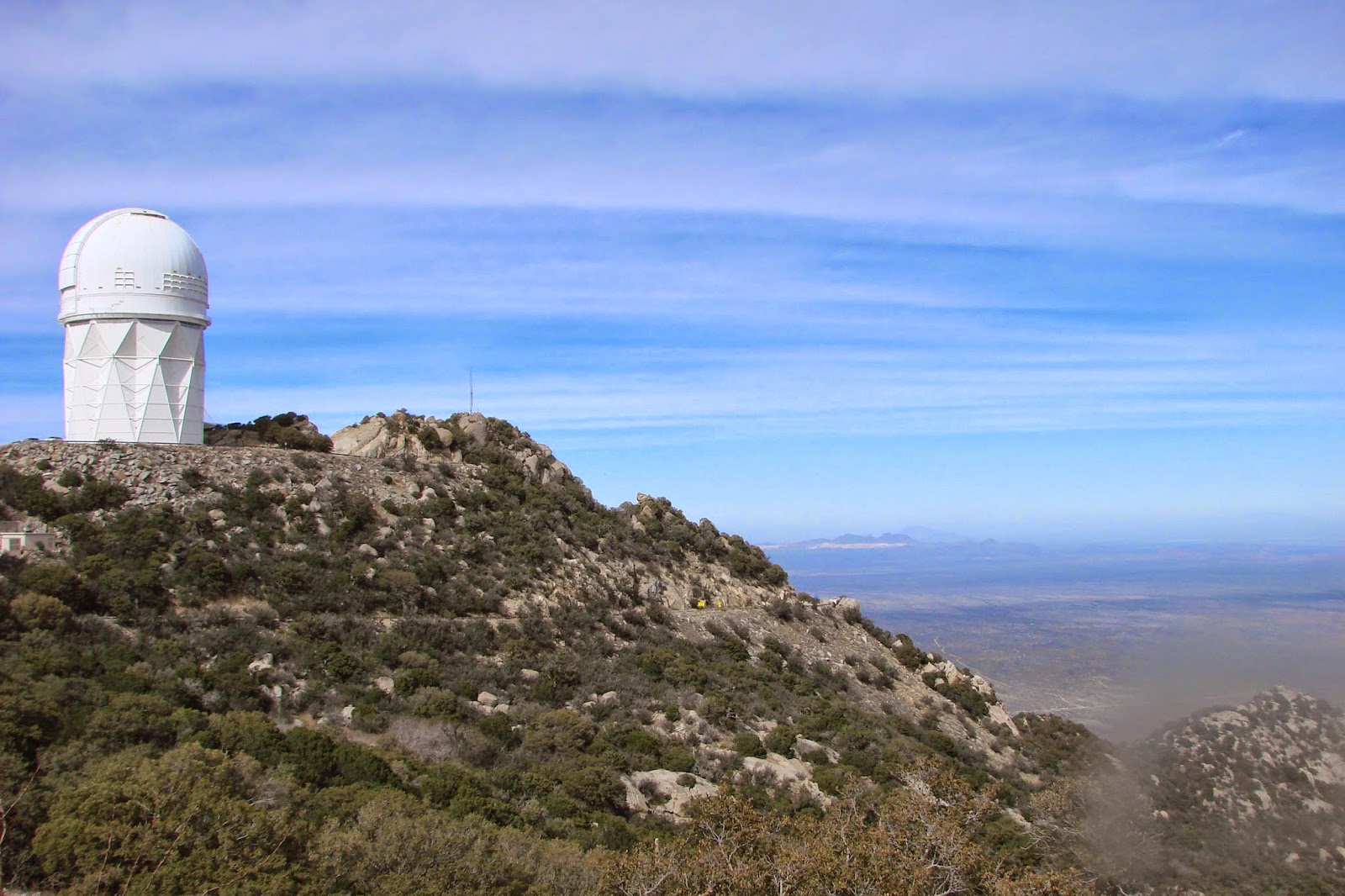 We took the walking tour up to the 4-meter telescope, which overlooks the valley. Our guide stopped several times claiming it was to point out various sights. Judging from his labored breathing, however, he might want to take this walk a little more frequently. 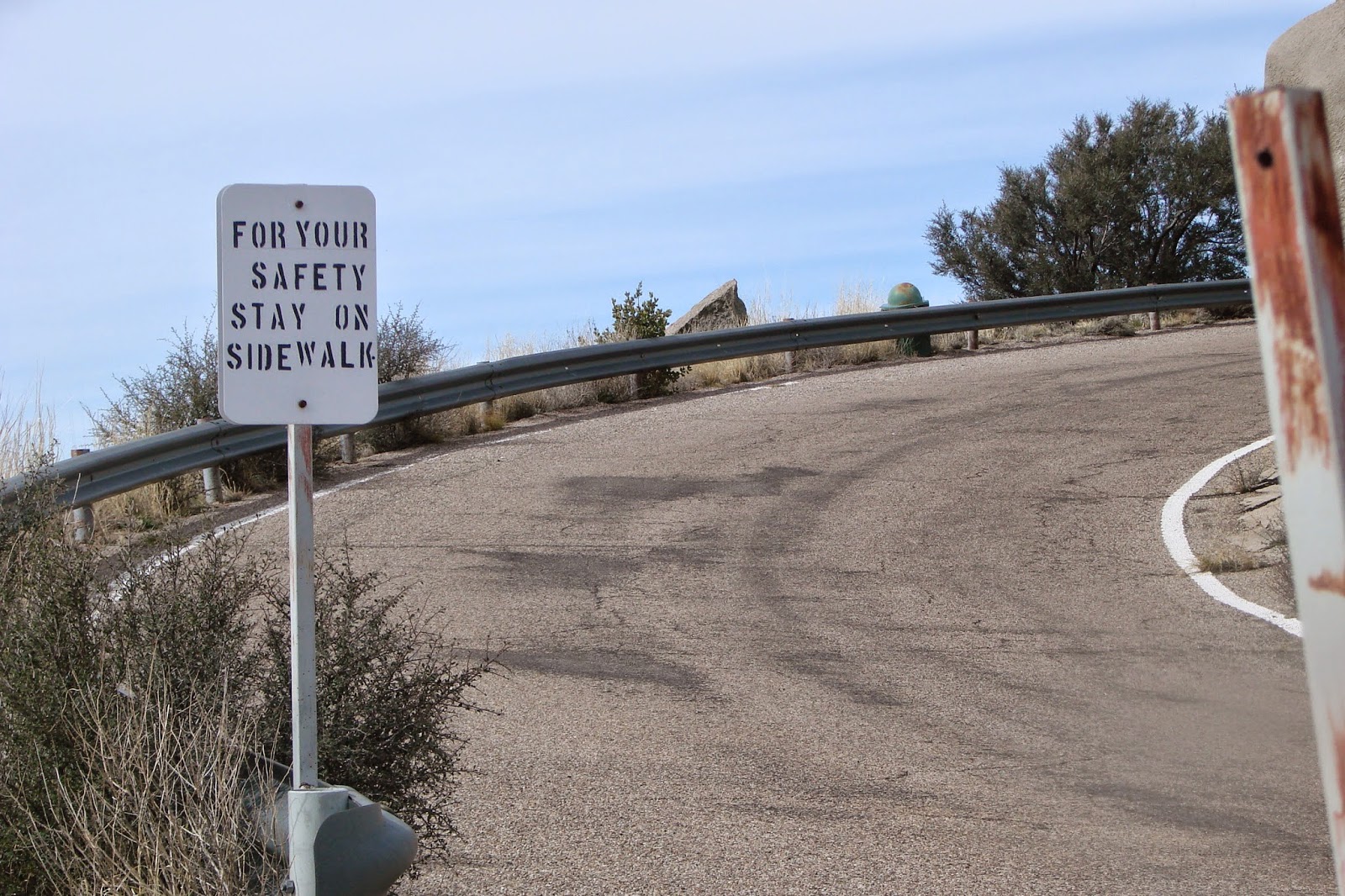 I was a little baffled by the sign since there didn't appear to be anything remotely resembling a sidewalk. On there other hand, there wasn't exactly any through traffic, so we only had to move aside for cars a couple of times. 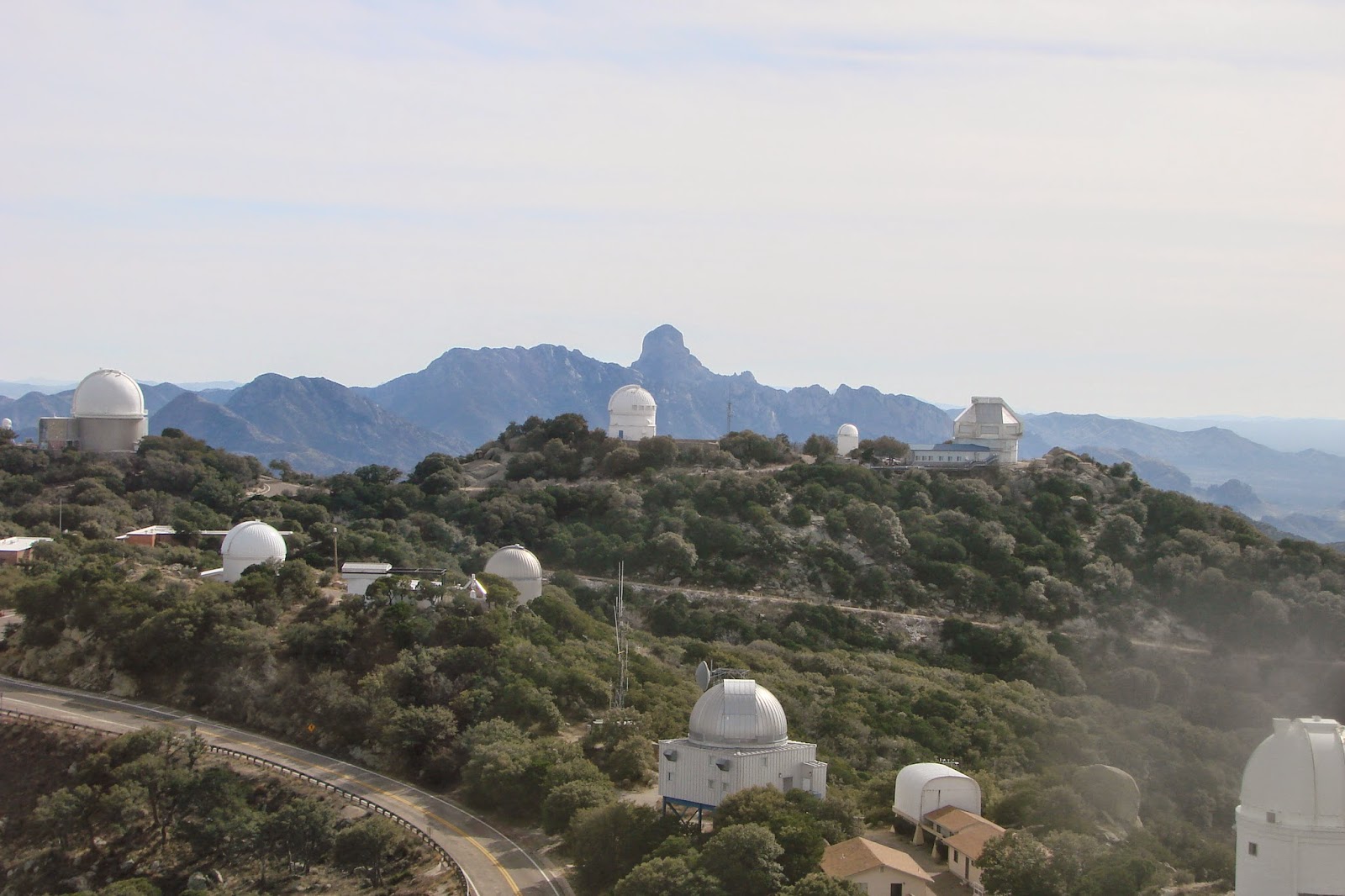 There was more than just the one telescope - 26, in fact. The world's largest collection of them. 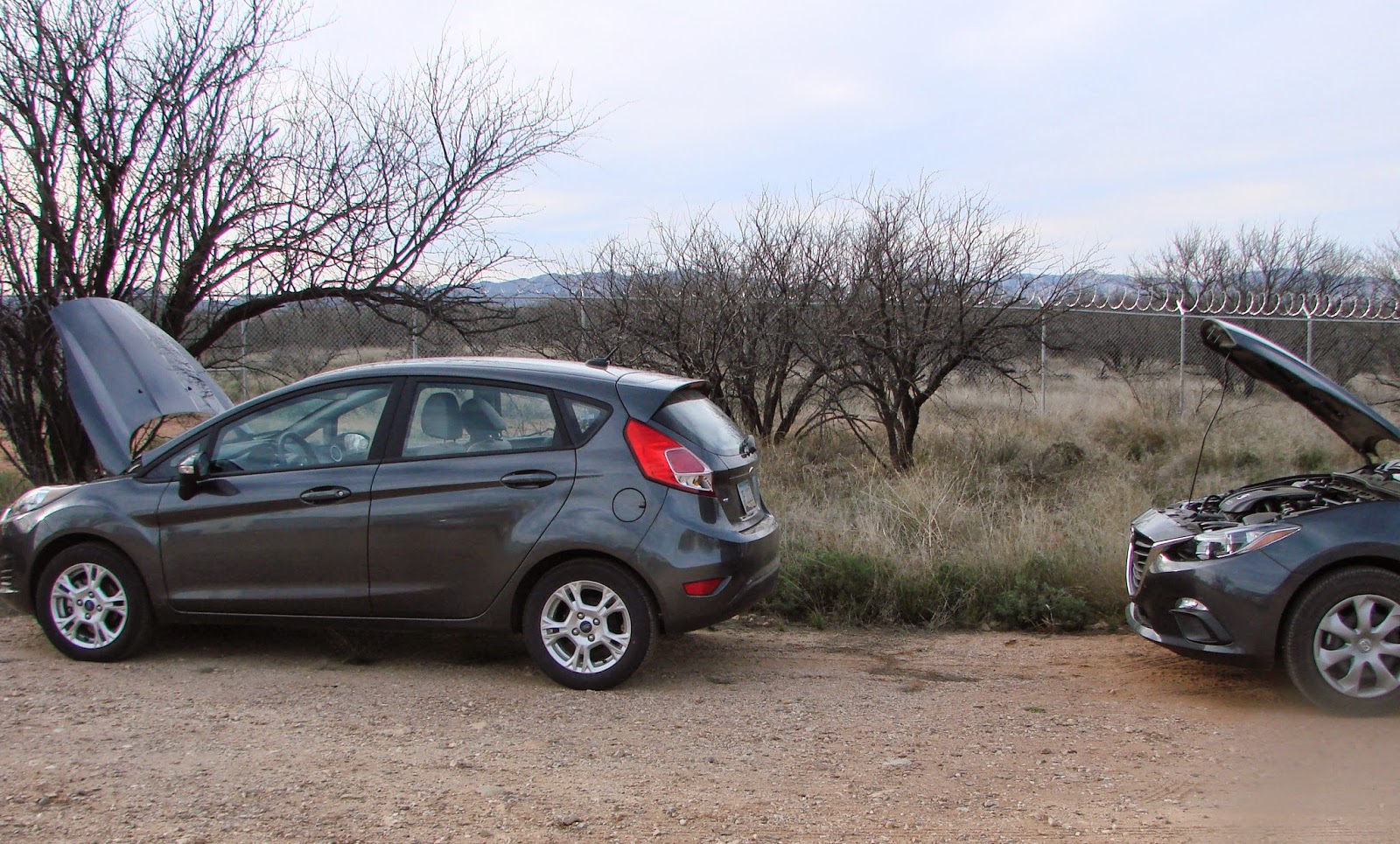 And then back to the outpost to park cars that couldn't make it up the rugged road to the garage. The raised hoods? That's to discourage pack rats from thinking they've found a new burrow and chewing up the wires in the engine. Because everything living in the desert is out to cause problems.
Posted by Secret Agent Woman at 11:10 AM