Friday and Saturday, February 17th and 18th: On our way. 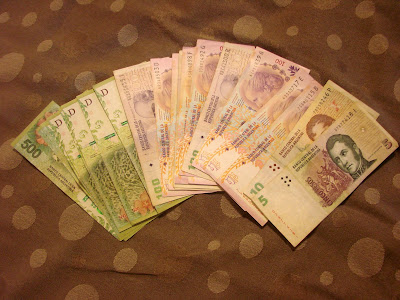 This Argentine adventure took us more than 6000 miles from home. First, we cooled our heels at the airport during a 3-hour delay while the airline had to wait for an inspector to fly in from Atlanta and a mechanic to drive in from Nashville. Fortunately, it was only a half-hour flight and we still got to the Atlanta airport in time to have sushi, edamame and a glass of white wine before boarding our overnight flight to Buenos Aires. 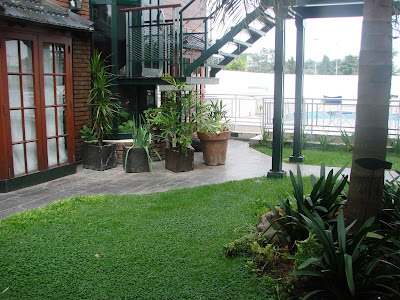 The flight south from there didn't leave until the next morning, so we booked a room at the Posada de las Aguilas (Hostal of the Eagles) close to Ezeiza airport, and spent a day in the city. It's mid-summer there, but not nearly as hot as summers get in my neck of the woods.  I stuck my hand into the cool water of the pool and wasn't really tempted. 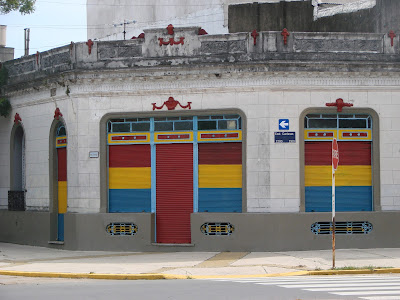 With only one afternoon/evening to spend, I'd done a little research and we had decided to go to the working class barrio of Mataderos. Our hotel clerk, Gerardo, was helpful and made some calls for us and arranged for the hotel's driver, Fabián, to take us into the city. 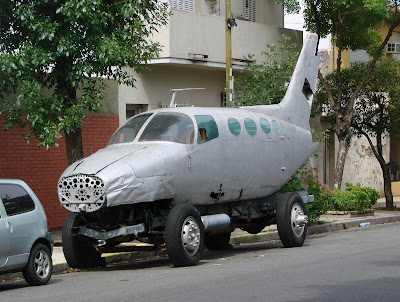 It was an interesting neighborhood to walk around. For instance, do you have any planecars parked on your street? I didn't think so. 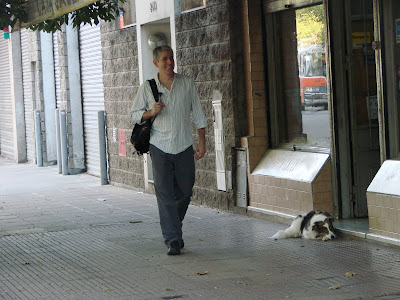 We got there right around the siesta, so lots of shops were closed. Even the dogs were all resting at that time. 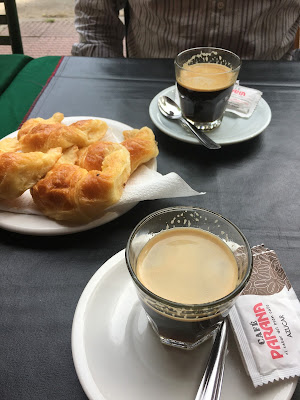 I'd read that we should definitely have a medialuna and cup of fresh roasted coffee while we were in Buenos Aires. I was on a mission to find them and we stopped at a outdoor café and ordered. Medialuna are a sweetened Argentine version of croissants. More like Italian cornetti, actually. What I didn't know then is that we'd be eating lots of them. And by lots, I mean every single day. It was the equivalent of being told you simply must make a point of having potatoes with one of your meals while you are in Ireland. At least medialuna are flaky and tasty, though, and Argentina makes good, rich coffee. 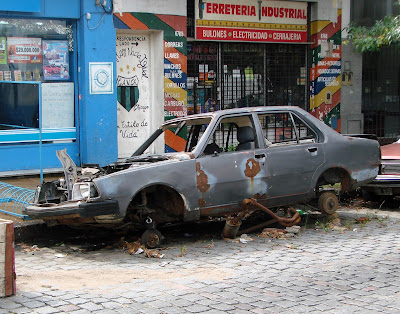 Mataderos is a neighborhood of contrasts. Broken down vehicle carcasses on one block, 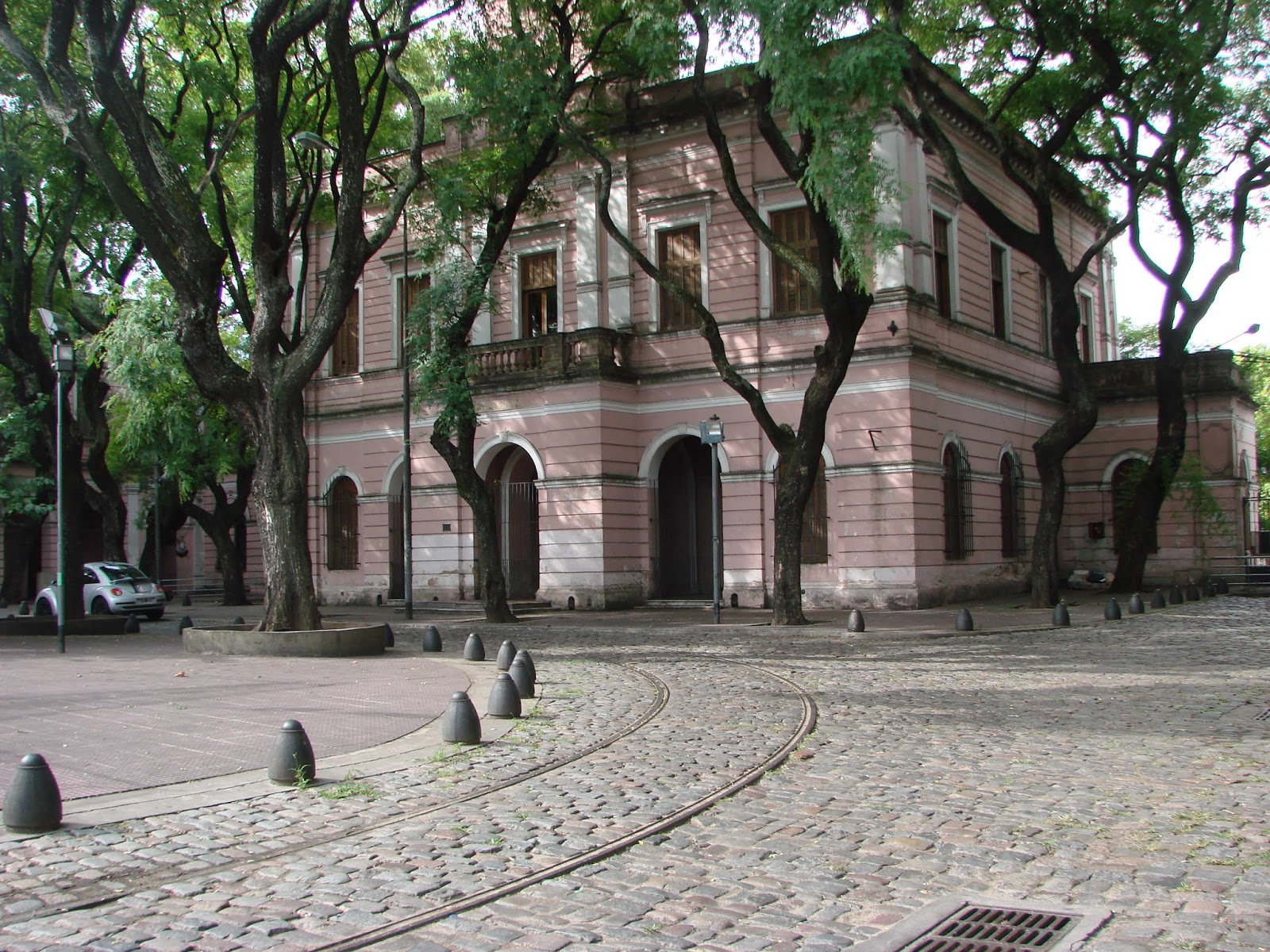 beautiful old government buildings in pastel shades on another. 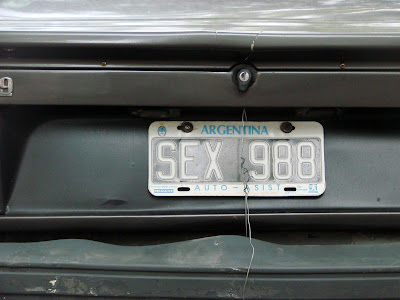 And this license plate that I couldn't pass up without a photo. 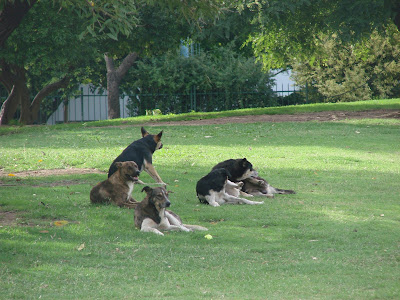 As in Cuba, los perros are un-neutered and un-leashed. Often, they hang out in packs. This gang was at a park we visited. They had the same idea we did to rest for a bit in the shade. 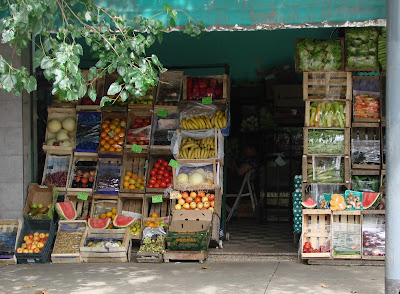 This was by far the biggest concentration of fruits and vegetables we would see on our entire trip. 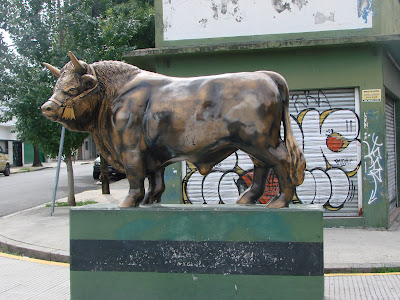 Because in Argentina? They love their meat. Beef, mainly, but also pork and lamb. 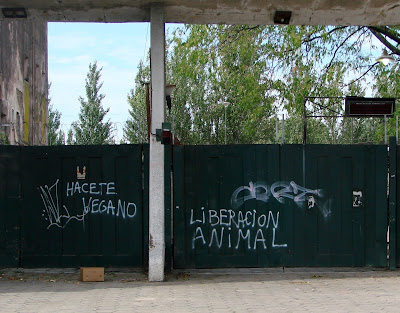 At the stock yard, protestors urged freeing the animals and suggested you become a vegan. Everywhere else, however, we saw restaurant after restaurant selling absurdly huge portions of meat with nothing else on the plate. 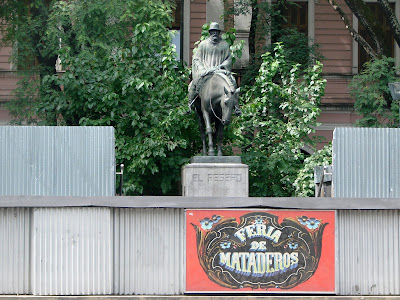 The main reason I picked this barrio to visit was their weekly Feria de Mataderos, a festival that celebrates the gaucho culture. 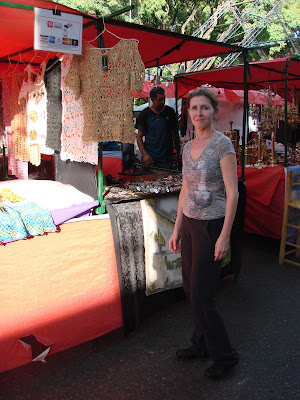 Booths are lined up along the street with local crafts for sale. We were hoping to find a tapestry or fabric in the muted earth tones of our living room, but had no luck. All the fabrics we saw were very brightly colored. 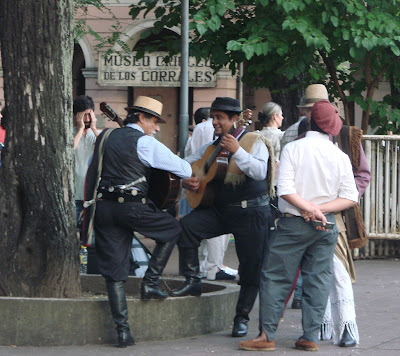 When the musicians started warming up, we found a table by the stage to watch. 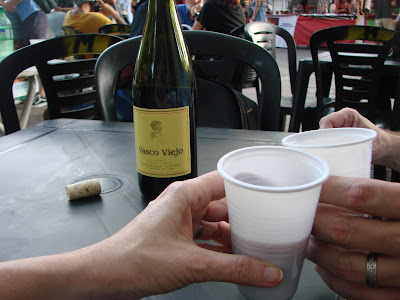 A food truck nearby was selling bottles of local red wine for four bucks. What they were NOT selling was any food not involving meat. My husband went in search while I held the table and after quite a while, came back with french fries. He couldn't even find any place that sold chicken. 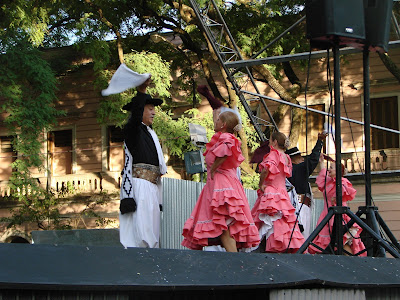 As we watched the dancers, we invited a younger couple to join us at our table when it was clear there were no other empty seats. Elena was from Venezuela and Matt from Normandy, and they told us they'd met in Nepal. They had traveled very extensively and said we should go to Vietnam, even if we only had "a few weeks" to spend there. That is something only a couple without kids could say! But they were friendly and interesting and we enjoyed talking with them. 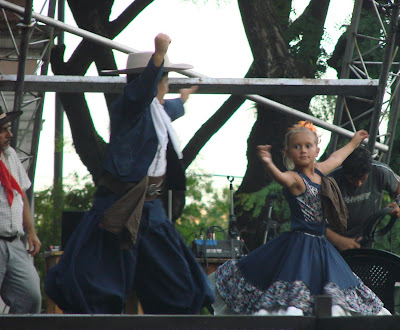 I especially liked the little dancers. They were so serious. 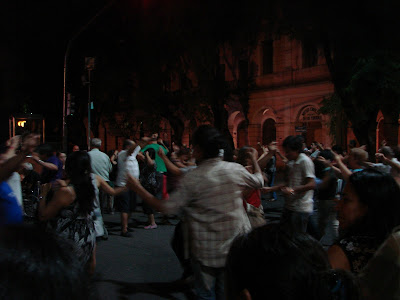 Following the performances, the local people danced in the street. There was a set-up similar to square dancing with someone calling out different traditional dances to music played by musicians on the stage. But we had an early flight the next day so we'd arranged for Fabián to pick us back up at nine. 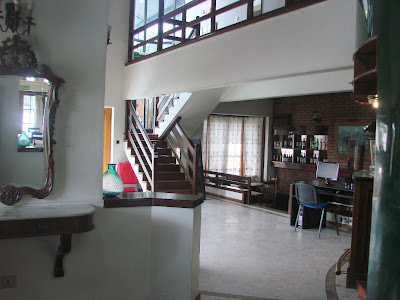 After all those carbs, I was craving protein and leafy greens. We ate at the hotel's little restaurant - trout and chicken, salads and another bottle of wine. The electricity shut off a couple of times, plunging the restaurant into complete darkness. We finished up and took the rest of the bottle back to our room. With the ceiling fan on and the window open, I slept like a rock.
Posted by Secret Agent Woman at 6:36 PM