Thursday, February 23rd: Back on track. 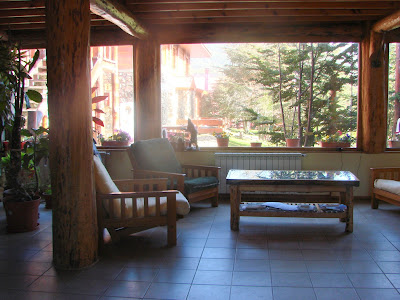 We slept in the next morning and then, after coffee in bed, had breakfast at the Hostería del Recodo - these folks included cheese with the usual medialuna and toast. 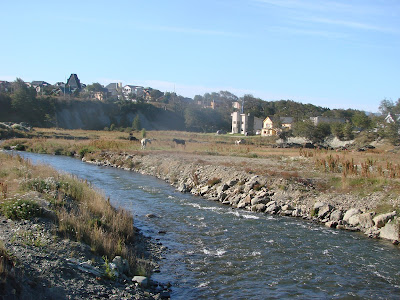 We headed out through the neighborhood and started toward Tolhuin. When we realized the morning weather was much nicer than forecasted and there was afternoon rain moving in, we turned around and went back to Ramos Generales for an early lunch of a pollo panini and a pint of Beagle IPA. It was our fourth day in a row of stopping in for something to eat. They seemed to recognize us and service was quick. 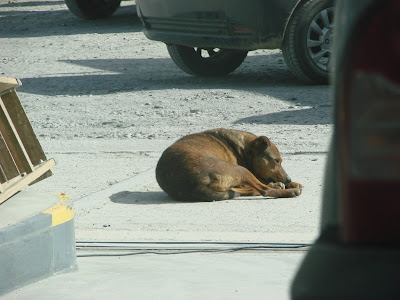 At the gas station, this wolf snoozed in front of the line of cars and only reluctantly moved out of the way for each person when it was clear he would be run over otherwise. 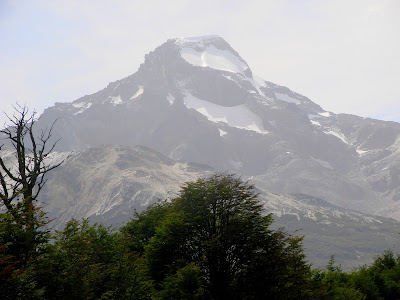 We got back on Ruta 3 and headed north through the Andes. 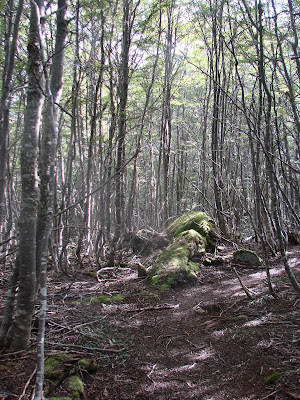 At the pull off, we took the path down into the woods towards Lago Esmeralda. 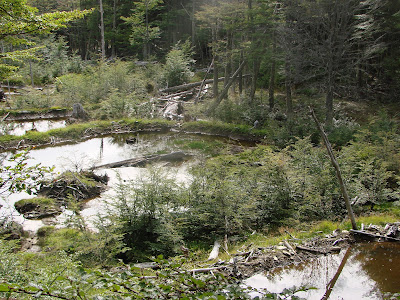 We passed beaver dams and small ponds, but they mostly are out from dusk to dawn, so we didn't see any of the beavers. 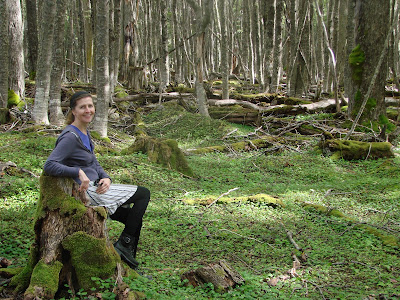 It was a much drier and warmer day than we'd expected. Santi and Augustín had told us it was a very wet trail and we had decided we'd just walk a little way until turned back by the muck. It turned out to be muddy in spots but easy enough to bypass through wooded areas. 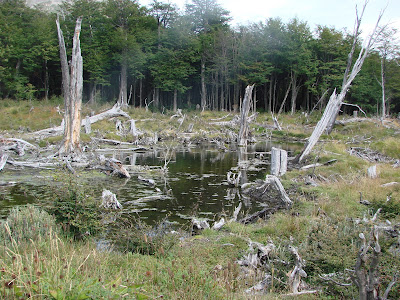 It only took about 45 minutes to reach the first beaver dam. 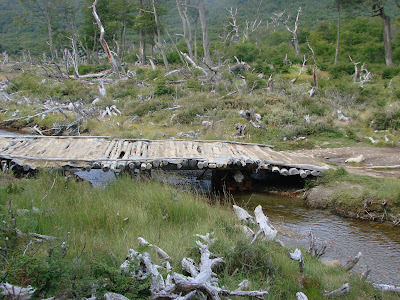 Even the peat bog was spongy but quite navigable.  There was a ramshackle bridge over one of the creeks. 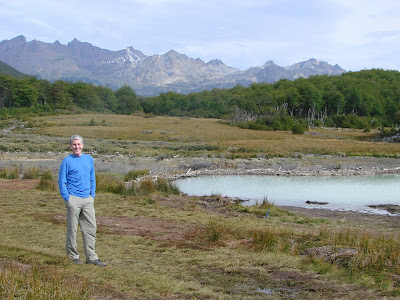 Without any problem we made it all the way to the Emerald Lake. 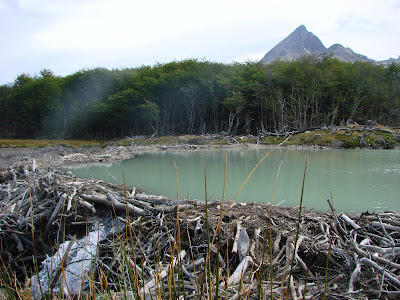 Lago Esmeralda is aptly named and was a pale green color - a cross between the grayish green of Spanish moss and mint. Very striking. The photos don't really do it justice. 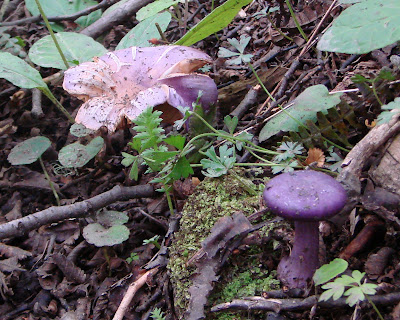 It stayed sunny until the end of our hike and then the clouds began gathering. 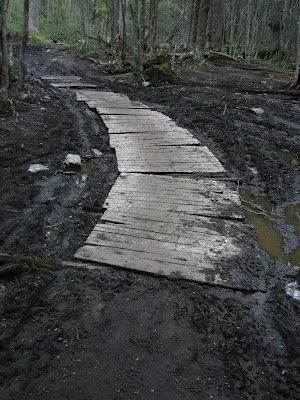 Along the wooded portion of the hike, we saw many, many pawprints pressed into the mud. This area has dogsledding in the winter time and the dogs train on trails in the summers. 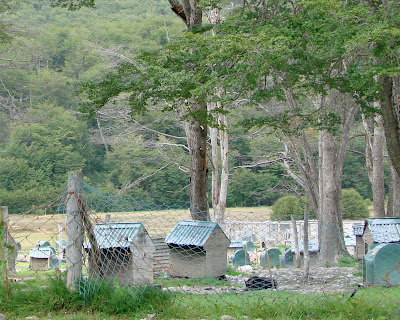 We passed a few of the sled dog farms, where each husky has its own little hut. 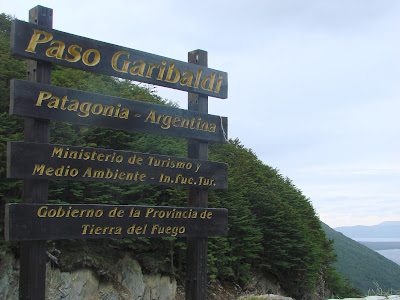 We stopped on the Garibaldi Pass to take a photo and it was so windy I literally couldn't stand upright. 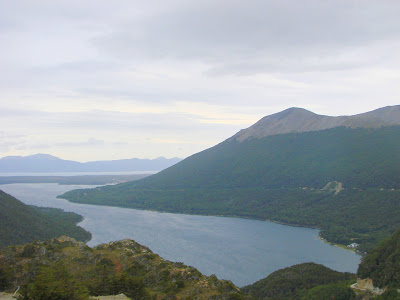 But the view of Lago Escondido (hidden lake) was worth braving the wind. 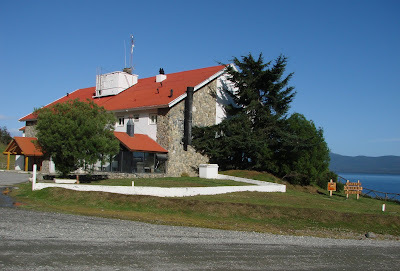 At last we reached the end of Lake Fagnano and our hotel, the Hostería Kaikén. 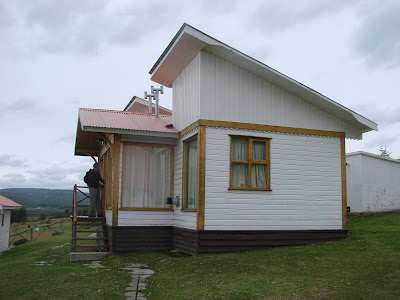 It had begun drizzling a little as we checked in and took our things to our cabin. 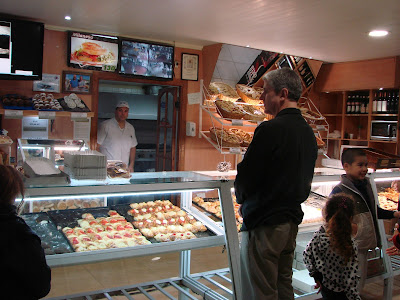 Next, we drove in to Tolhuin to have a pastry and coffee at the famous Panadería La Unión. I'd read that it was the town's social hub and that you get mediocre instant coffee and delicious pastries. Even the counter guy warned us the coffee would be terrible as he gave us our tokens for the machines. And indeed it sucked. But my raspberry pastry was very, very good. 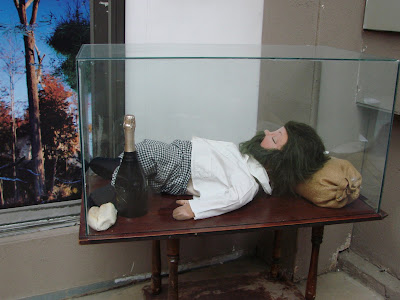 La Unión was an odd place. I think this might be the owner in his younger years? It looks like someone got the Sleeping Beauty story mixed up and swapped in a sleeping dwarf. 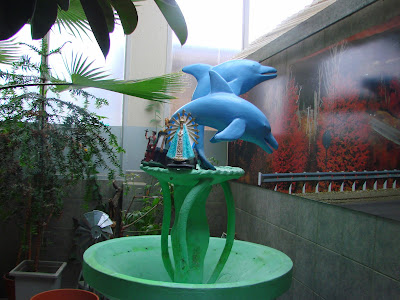 And who doesn't decorate with brightly colored dolphins and a psychedelic Virgin Mary? 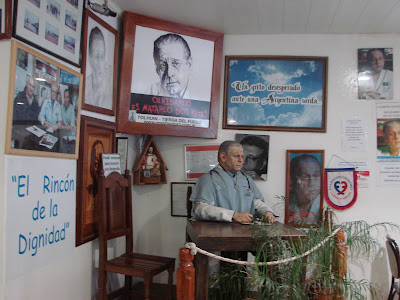 But most interesting was The Corner of Dignity. The character is René Favaloro, an Argentinian cardiologist who was a pioneer in coronary bypass surgery. The owner of La Unión, Emilio Saez, was an admirer of Dr. Favaloro, who set up a foundation similar to the Cleveland Clinic. The foundation trained hundreds of surgeons and also had a research lab. Favaloro himself operated daily on indigent patients. However, the Foundation was sinking in debt due to Argentina's political and economic woes in 2000. Unable to get assistance for his foundation, he shot himself in the heart. Such an ironically sad end to his story. 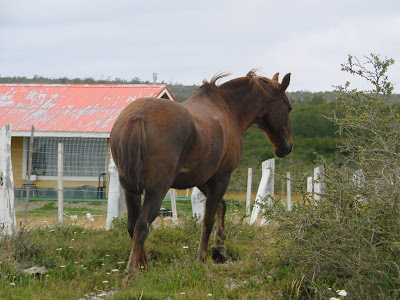 We headed back to the Kaikén when we'd finished our coffee and pastry. Actually, I threw my coffee away. It was truly that bad. 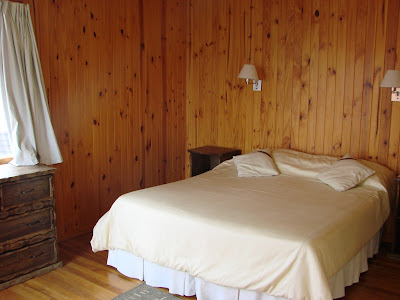 Our cabin was cute and cozy and we planned for this last leg of our trip to be mostly relaxing. My husband went to see if he could get some wine glasses at the main building. He was told that no wine was allowed in the rooms, only water. But that we could buy wine in the bar. Fortunately, I married someone who sees rules as I do - suggestions. We used the water glasses in the room and cracked open a bottle of Syrah. 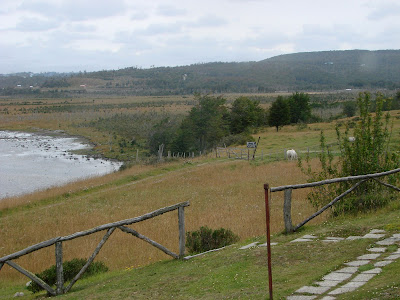 It had stopped raining by then and we could see the lake and hills from our room. 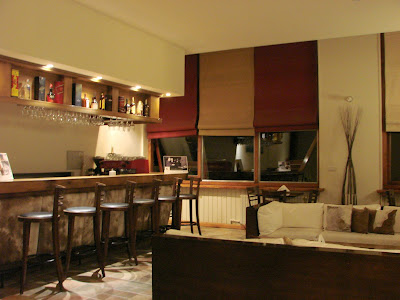 The restaurant didn't even open for dinner until 8:30, so we decided to go to the bar for a cocktail and use of the wifi. 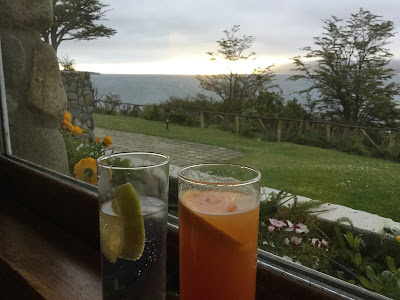 I had a Sex on the Lake, described in the menu as containing Vodka Absolut, durazno (peach), naranja (orange), and granadina. All I can say about it is that it was deceptively sweet and potent. 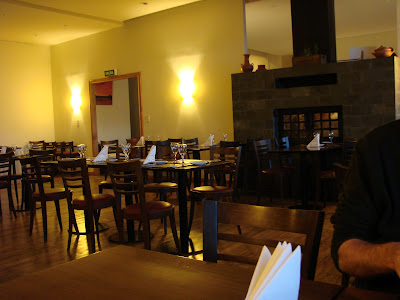 We were the first ones in for dinner. But that was okay - I really wanted to sit by the window. 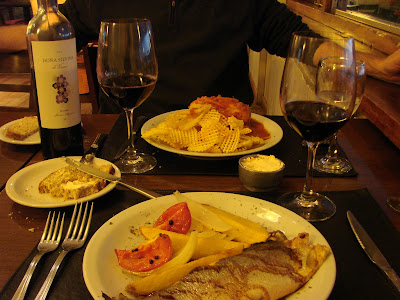 At dinner we had very tender butterflied lake trout stuffed with a mild cheese and pollo portuguesa, with capers, onion, carrots, peppers, peas and tomatoes and four kinds of cheeses, along with salad and papas frites. Both delicious. And a bottle of Doña Silvino Malbec. We had chocolates from Ushuaia back in our room with the rest of that Syrah we'd brought. It was a good way to wrap up yet another travel day where the weather was on our side.
Posted by Secret Agent Woman at 7:11 PM