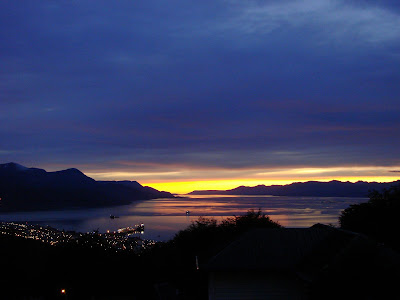 Monica and Salvador got up before 5 am to make us coffee and toast so we could get on the road to Rio Gallegos, the next stop on our trip. 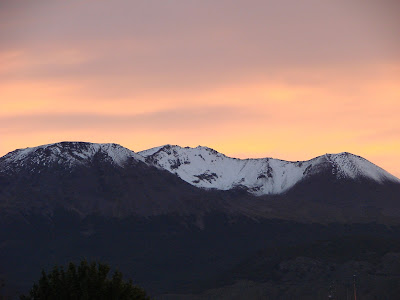 The plan was to take Ruta 3 out of Ushuaia, and head up to the town of Rio Gallegos, on the Atlantic coast. From there we'd drive up the next day to a park that has a hike which takes you to an overlook above a penguin colony. Let me tell you, I was very, very excited about the idea of seeing penguins. 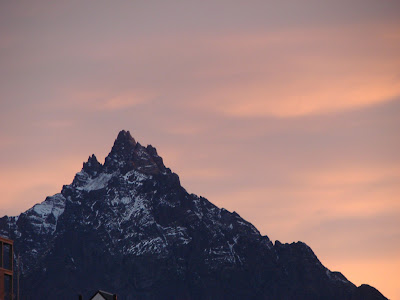 The island of Tierra del Fuego is separated from the rest of Argentina by part of Chile. We would have to cross into Chile, take a ferry across the Magellan Strait, then cross back into Argentina. Piece of cake. 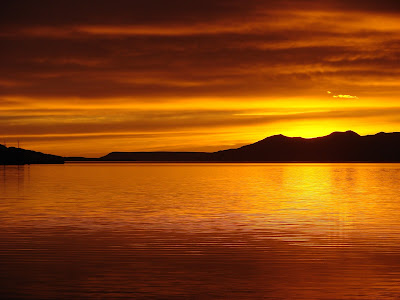 Salvador had told us that some mornings at sunrise the red sky is reflected in the bay for just a few minutes. I was really glad we got away early enough to see that. 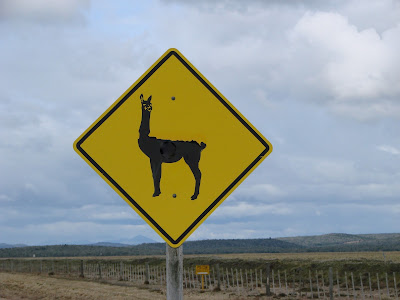 After crossing over the Andes, we headed east towards the coast through the steppes. We started seeing signs warning us of guanacos. Guanacos! That was the other animal I really wanted to see in Patagonia. 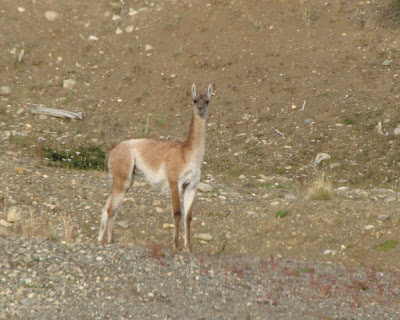 Soon enough, I spotted the first one and shouted, "Guanaco! Guanaco!" We pulled over to get a photo. We also saw a Fuegian red fox, but I didn't get a picture. 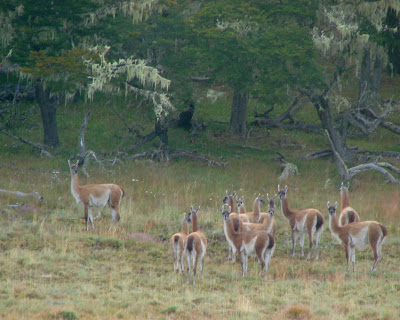 Guanacos are South American camelids. Llamas are the larger, domesticated version of guanacos. Alpacas are in the same family, but woolier. 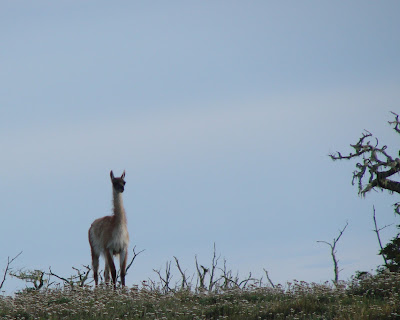 Each herd is made of several females, their young, and one dominant male. The other males have to split off from the herd, which seems a little brutal to me. 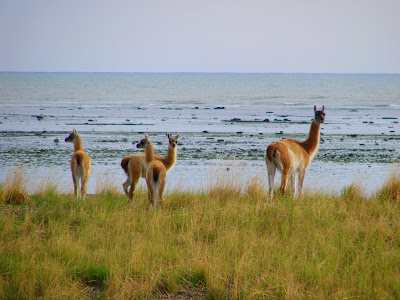 We ended up seeing many herds, mostly in grassy areas by the woods or the ocean. You have to admit, they are awfully cute. 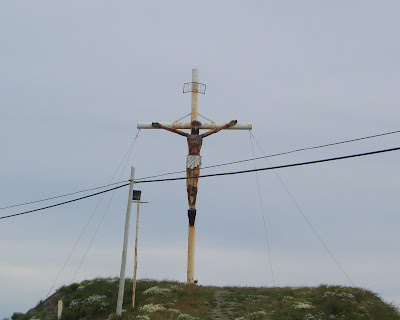 Argentina has been a Catholic country since Spanish colonial rule. Crucifixes are a common sight along the highway. 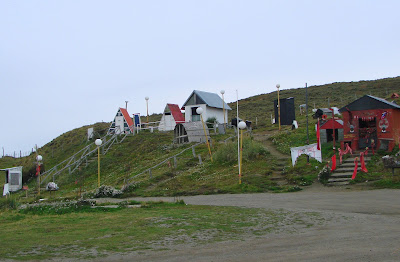 But so are roadside shrines. Some to the Virgin Mary, some to mythical folk saints. We pulled over to check out this big group of shrines. 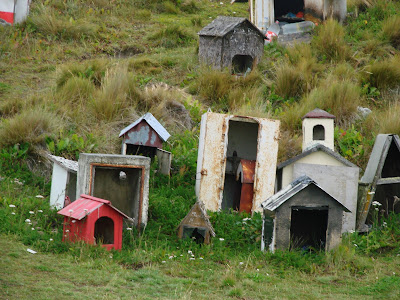 Some were humble little huts, with tiny statues in them. 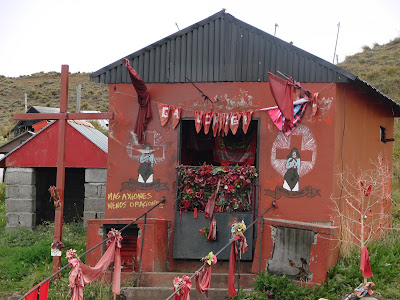 But the biggest cult following is of Gauchito Gil, an unofficial folk saint who lived in the 1800's. He defected from the military and was a Robin Hood-like character. He was executed by being hung upside down from a tree and beheaded and the usual healing miracles followed. We looked in and were surprised to see a lit candle and many, many empty bottles of beer. 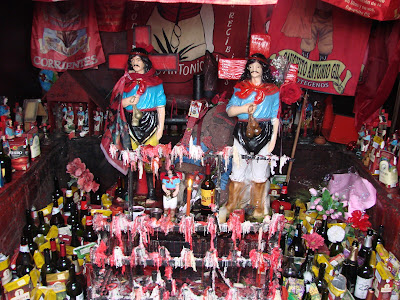 I could have stayed for a while looking at all the little altars, but we wanted to get on up the coast and to Rio Gallegos. Annnnnnd... that's when our plan fell apart. We should have opened a beer for Gauchito Gil - maybe he'd have intervened on our behalf. 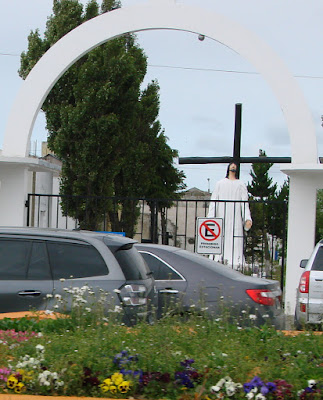 The border guard at San Sebastian on the Chilean border checked our paperwork and then told us to pull through the checkpoint and park. We had to go get forms stamped. We got the Argentine stamp and then were unable to produce the required documents to proceed in Chile with our car. Turns out, we were supposed to let the rental agency know we were leaving Argentina, pay a fee, and get permission. Our non-English speaking agent didn't tell us (or did and we didn't understand) and there was no fixing that mistake. We stood in lines, several times, explained ourselves in Spanglish to a variety of head-shaking armed officials, trying to convince them that we understood our error and would they please just let us return to Argentina. Finally, they allowed us turn our car around and re-enter. 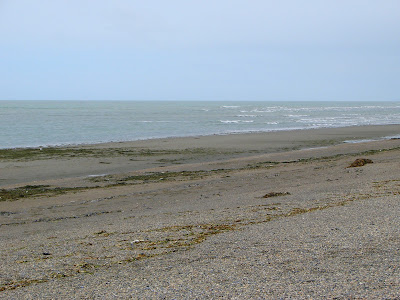 As we drove back south, I called Expedia and explained our plight and they cancelled our room at Rio Gallegos and fully refunded our money. Then we stopped at the tourist information center in Rio Grande, on the coast, and used their wifi to book a room in Ushuaia for the next two nights. I think the information guy was impressed by how quickly I got on my iPad and made that happen. The town wasn't very pretty but it is the trout fishing capital of Argentina and I do love trout. 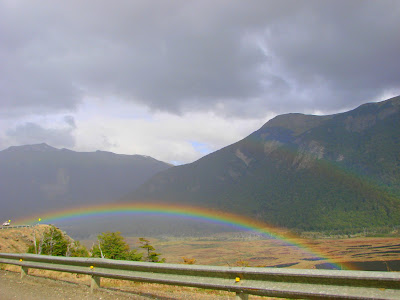 I was thankful that even with a major glitch in our plans, we were able to laugh, roll with it, and make new plans on the fly. As we drove back up into the Andes, we passed this double rainbow. My husband said, "Get your camera!" But I was fumbling for the case of what I call his magic glasses - color-correcting lenses I'd bought him that allow people with red-green color blindness to see a fuller light spectrum. I got them on to his face before I went for my camera, missing the best view. But it was totally worth it to hear him exclaim, "Holy shit!" It was the first time he'd ever seen all the colors in a rainbow. We agreed that I must actually love him if my wish for him to experience a rainbow came before my desire to get a good photo. 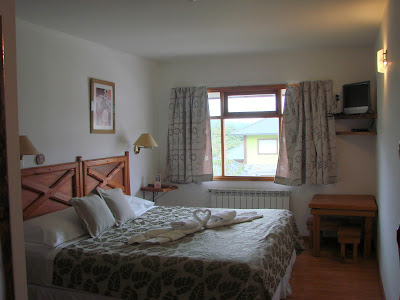 We got to our newly booked hotel, Hosteria del Recodo, in a newer section on the western side of Ushuaia.  I was really happy to see our quick choice was a good one. 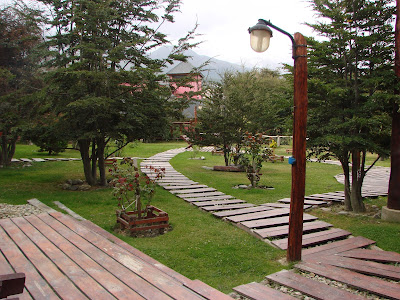 Out back the hotel had decks overlooking grounds with paved pathways. 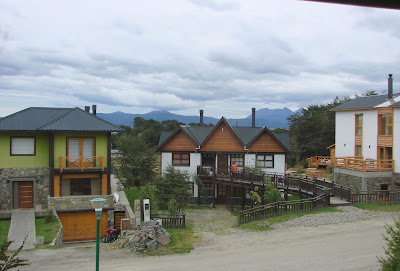 Our room looked out over the neighborhood. The streets have not yet been paved and were a little dusty. 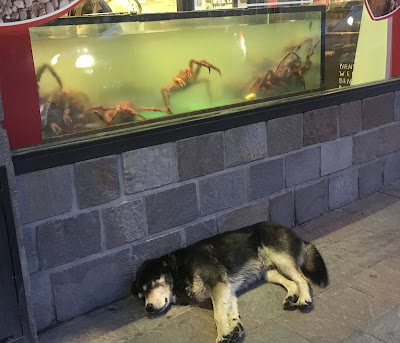 We had dinner at Kenos, just off the Main Street. We were the only people there at first. Another round of pollo grille and trucha with salads, bread and a bottle tempranillo. Before we ate dinner, we went down to the pier and booked plans for the following morning. But that's the subject of my next post.
Posted by Secret Agent Woman at 6:19 AM