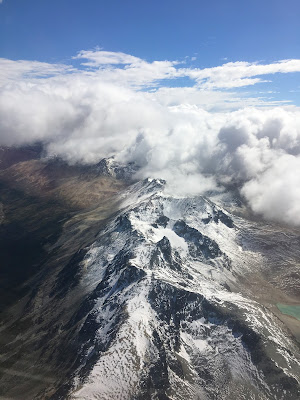 After breakfast (the ubiquitous medialuna, toast and several cups of very good coffee), we returned to the airport to fly down to Ushuaia at the southern tip of Argentina. It was a very turbulent flight, with the approach coming closer to the mountains than I was strictly comfortable with. 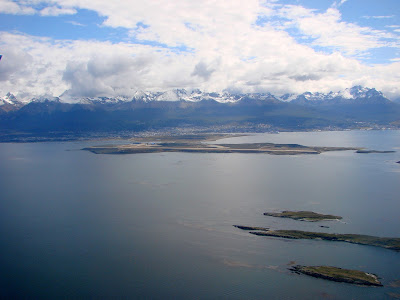 But so beautiful! We flew in over the Beagle Channel, named for Charles Darwin's voyage along that passage of the archipelago. This part of Patagonia was named Tierra del Fuego - Land of Fire - by Ferdinand Magellan when he saw the many fires of the native people from his ship as he sailed along the shore. 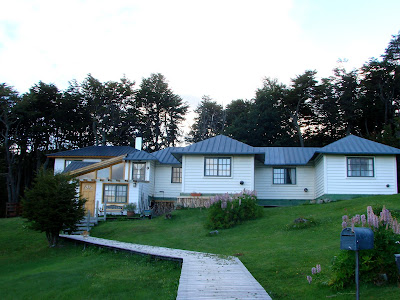 After a confusing Spanglish conversation with the rental agent, we picked up our car and headed through Ushuaia and up the hillside to The Cabañas del Martial, just below the Martial glacier. Monica greeted me with a kiss when I walked in and then her husband, Salvador, showed us to our room. 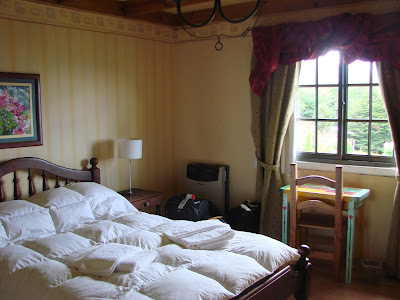 We stayed in the main house, where the hosts also lived. It was cozy and had a lovely view of Ushuaia Bay. 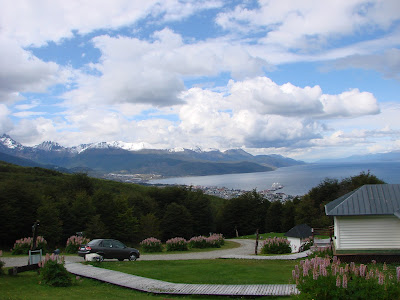 After Monica and Salvador gave us recommendations for restaurants and things to do in town, we set out to do a little exploring. 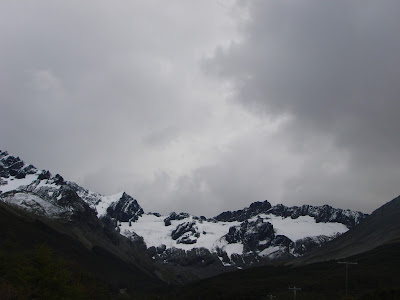 We had planned to hike up towards Glaciar Martial, but it started raining before we'd gotten very far along the path. We decided to head down into town instead. 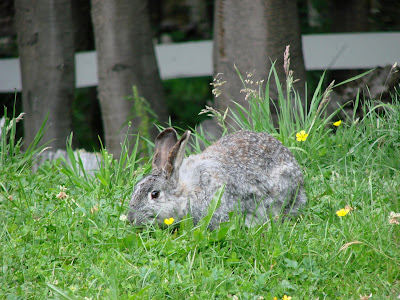 On our way out, we saw this adorable fat bunny. We also saw dogs. Many quite large. At one point, I spotted a pair of enormous huskies and said, "Wolves! Jesus, they have freaking wolves here!" After that, we called every dog "wolf." 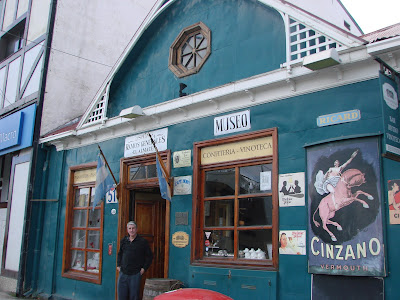 We went into Ramos Generales, a fascinating restaurant/ bar/museum, and had a very inexpensive chicken panini and some wine. 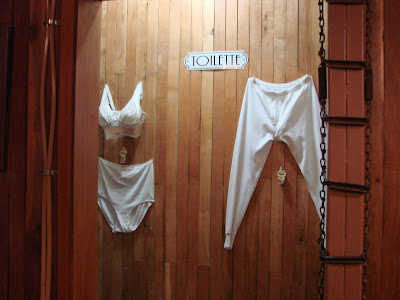 This has to be the most unusual way I've seen to designate women's and men's bathrooms. The men's long undies were stuffed. Reminded me of the airport scene in Spinal Tap. 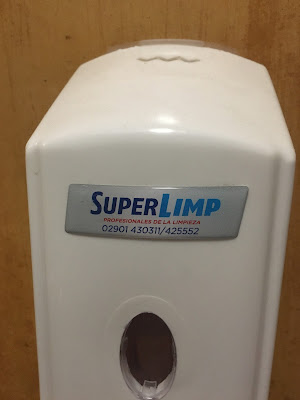 When I returned giggling from the bathroom, I showed my husband this photo of the soap dispenser. 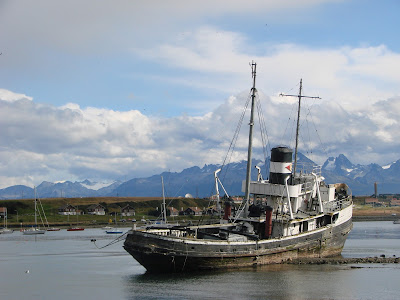 It had stopped raining by the time we'd finished our food, although it was still overcast. We walked down to the bay to look at the ships in the harbor and this WWII-era rescue tug, built in Boston for the British Royal Navy. The HMS Justice served in the invasion of Normandy and was later decommissioned and sold. Renamed the Saint Christopher, the tug was used for salvage operations in the Beagle Channel and was eventually grounded and abandoned here in the bay. 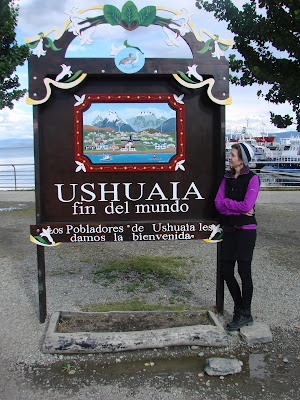 The End of the World. It's not of course - that would be Antartica. And there is even a little Chilean settlement of mostly Naval personnel on Isla Navarino across the bay. But Ushuaia - pronounced "Ooh-SWA-yuh" - still claims the Southernmost city distinction. 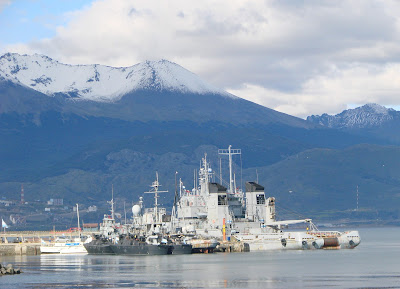 The Argentine Navy has a base in Bahia Ushuaia, and controls the port there. 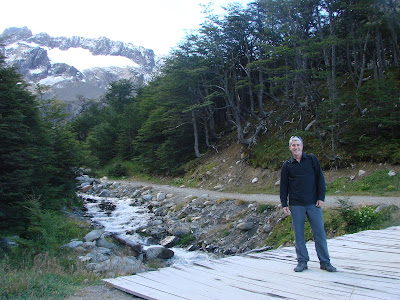 Since the skies had cleared, we went back up to the glacier to retry the hike. 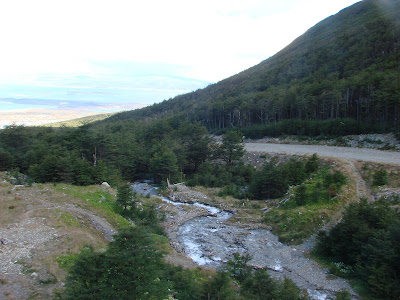 It was very steep in parts and the road followed the rivers of glacial melt. 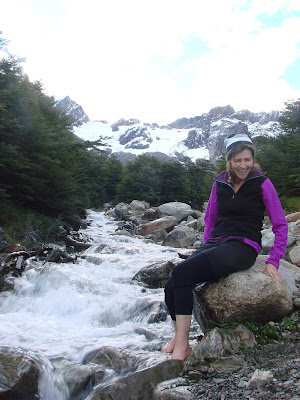 I have this thing about at least wading into bodies of water I've not encountered before. That doesn't always extend to creeks, but this was the first time I'd been in South America, so I was going in. It was bloody cold! 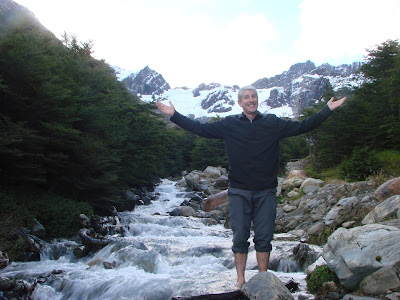 My husband is a show-off. 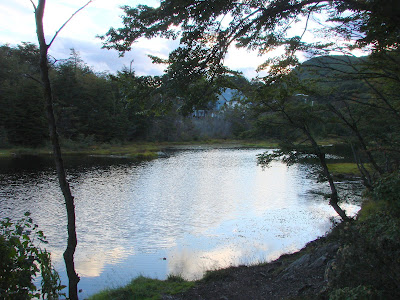 As we drove back into town, I saw a notation in the map for Laguna Negra and we made a detour to find it. It turned out to be a small dark pond over a peat bog, hidden behind trees in the residential area of Ushuaia. 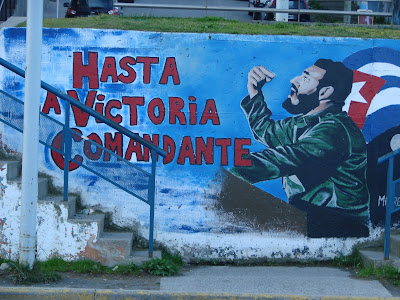 We thought we'd left El Lider behind in Havana. Nope - we saw Fidel's image in Argentina, too. 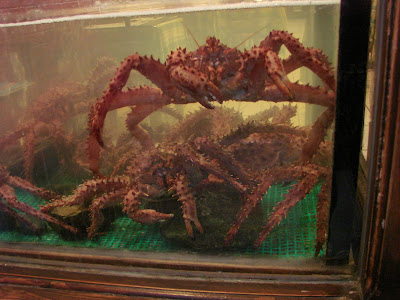 We went back into town for dinner, in search of the local specialty, centolla (king crab). An interesting note about Argentine Spanish: it is called Castellano and has some differences from the Spanish spoken in the rest of Latin America. Partly it's that it is more lilting - "Hola," for instance, is a sing-songy, "Oh- LAH." And the ll sound is said as a "zh "rather than the usual "y." So centolla is pronounced "cen-TOZH-uh." I would have to remind myself when order pollo grille (grilled chicken) to say, "PO-zho GREE-zhay." 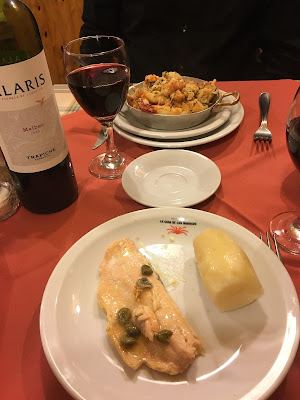 We had dinner at La Casa de los Mariscos (House of Seafood). We always split our orders so that we can try different things. We got an order of the centolla provençal, made with white wine and garlic, and trucha grille (grilled trout) in black butter caper sauce with a boiled potato. And a bottle of local Malbec. Simple but very good and not outrageously expensive. 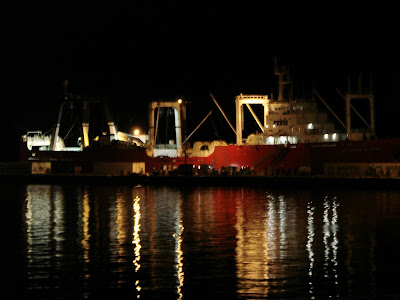 We went back to our room after dinner and chatted for a bit with Max, the young Canadian who had the room next to ours. He was excited to be heading for a penguin boat tour the next day and we agreed that you absolutely had to see penguins if you were in Tierra del Fuego. But we'll get to that.
Posted by Secret Agent Woman at 11:41 AM