How does the time fly by so quickly? 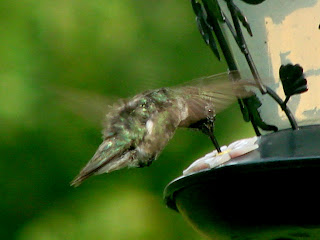 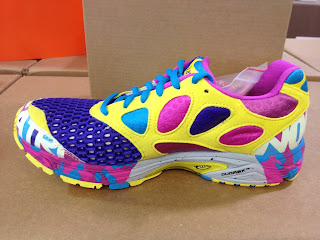 I was looking at running shoes earlier this summer and saw these on display. I thought they might be designed for athletic clowns. But guess what? At the gym yesterday morning I saw a pair of them on the feet of one of the trainers. I had to bite my lip to keep from laughing at him. 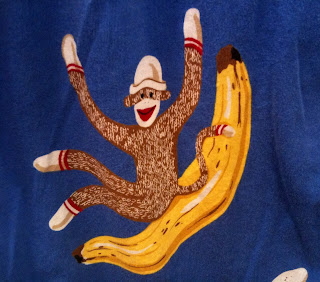 I like sock monkeys as much as the next person - I even own one. But seriously, what the hell? On old-fashioned cotton housedresses like my grandmother used to wear, no less. 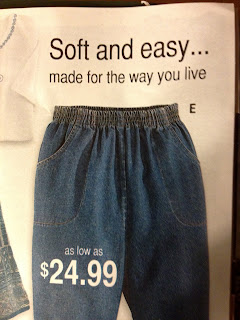 And then I got a catalog I'd never heard of in the mail and the first page I flipped it open to was this one. Made for the way I live? I had to put this one on facebook - because my immediate thought was that you'd have to kill me to get them on me and even then I was pretty sure my corpse would fight back. I know I'm about to hit a half century, but dear God, no. Just no. In fact, no to any pants with an elastic waist. I'm hanging on to my Levi's, thank you.
Posted by Secret Agent Woman at 10:30 PM 30 comments:

Have I mentioned my younger child is driving now? 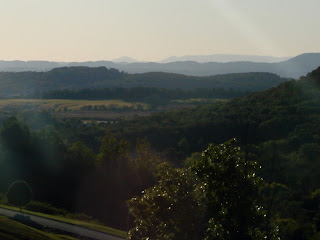 After my older son had gone back to his university today, my younger son suggested he drive me over to a place they'd found while they were out walking. He thought I'd like the view and he's eager to take any opportunity to get behind the wheel. 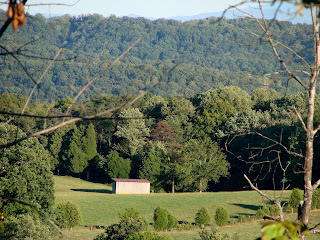 It's probably half a mile from our house, located on a hillside. 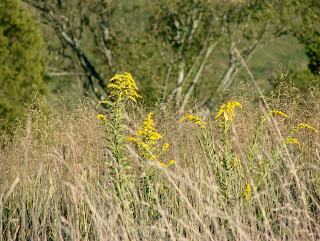 Right now there are only a few houses so the land is still scrubby and undeveloped.  Which is how I prefer it. 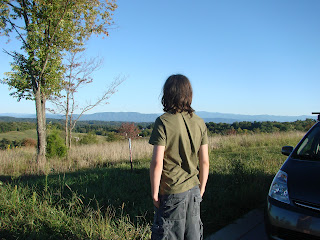 He parked the car and we walked along the road for a bit. I bet the coyotes have a field day out here at night. 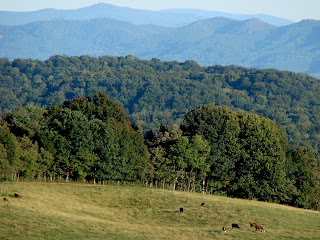 The Smokies are off in the distance, a shadowy backdrop to the farms here.  Appalachia has its problems, but a lack of beauty isn't one of them.
Posted by Secret Agent Woman at 10:42 PM 32 comments: 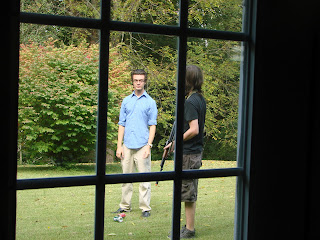 Looks like the scene from a movie where things are about to get ugly, doesn't it? But it was just my kids - my younger son had lobbied to be allowed to buy an airsoft rifle and he and his brother had set up a course of cans as targets in the back yard. 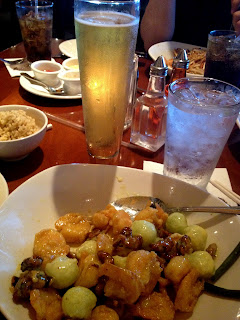 I took the opportunity of the older son being home to celebrate my birthday a week early. We went out for dinner to celebrate - I got shrimp with candied walnuts and honeydew melon. And a Kirin. 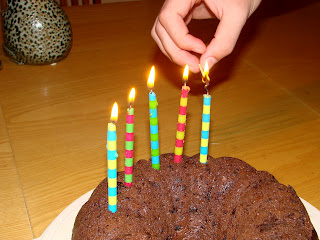 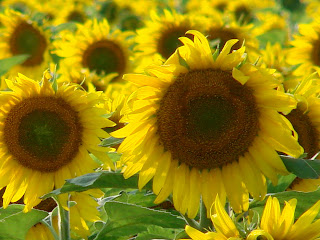 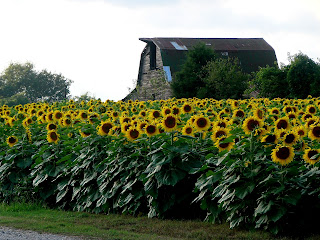 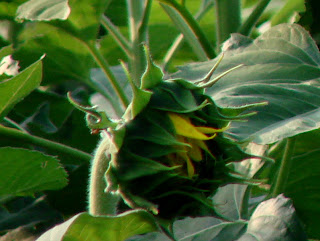 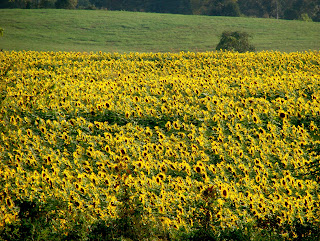 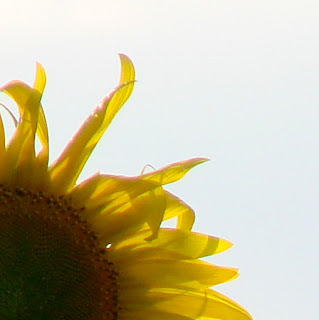 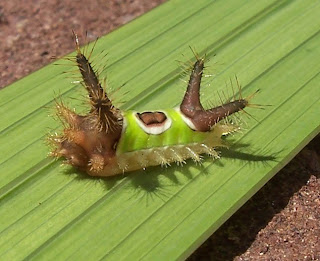 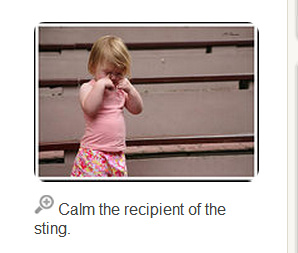 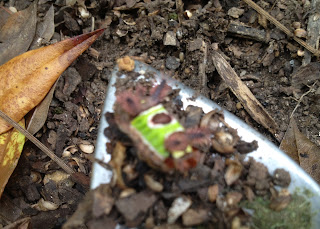 When I went back outside to take a photo, my hands were still shaking and the picture is blurry. But this is the perp, after I knocked him off the leaf and scooped him up with a trowel. I normally leave bugs to their own devices as long as they stay outside. Bumble bees are allowed to hover by my head as I work, lady bugs can crawl on my shirt, inchworms are free to measure my arm. But this one? I killed the little fucker.
Posted by Secret Agent Woman at 9:59 PM 35 comments:

Bring it on, Universe - you don't scare me.

So yeah, it's been a while. And after a hiatus from just about everything I could manage, I went out today to start moving again. I woke with a budding migraine and it was overcast and muggy out. But it was time. I took a couple of excedrin, laced up my running shoes and headed to the dam. I set my music on shuffle and this is what it chose to smack me with, first thing:
"Shitty weather, bad timing, lucky penny glued to the ground.
Dirty look from total stranger, hope you get lost and you're not found." 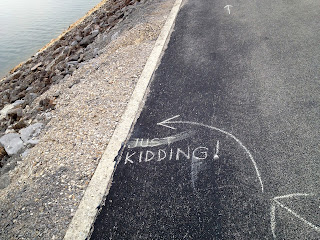 I ran along a course that had been marked in chalk for a race the previous week.  A buzzard left the dead fish he was working on to fly in low and circle around me once before heading off over the water. I found myself laughing. In spite of my pounding head, I was determined to run 2 miles and start getting back on track.  Because I've learned a thing or two over the past few years.  I know now that the best way to keep from drowning is to voluntarily take a deep breath and sink.
"So I hold my breath 'til my heart explodes.
'Cause this is how it is and this is how it goes." 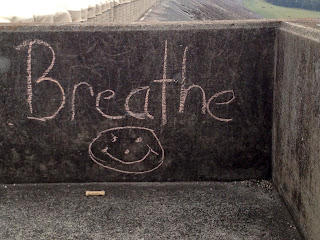 It sounds counter-intuitive, I know. But there is a peace below the waves and once your eyes adjust, the murk begins to clear. So I sink, and I wait, and I let myself start to consider that the world may have more in store for me than I'd realized. Inevitably the storm passes. I am back above the surface now, breathing deeply. And in time, I'll know what is next for me.
"So unscrew my head and rinse it out.
Polish my thoughts, turn into doubts." 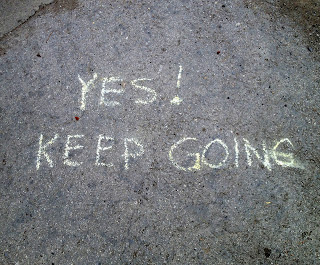 I passed two miles and ran on through the woods. Once I was back in the open, I stopped running at 3.33 miles because I liked the number. And, as always when I see a clock or calendar or odometer hit a triple number like that, I took a moment to wish for peace. Headache completely gone now, I walked back up the steps to the dam and along the water. I was aware that I hold peace in my open hands. Sometimes I just need the space and time to remember that.
"You can steal my body but you can't steal my soul.
'Cause this is how it is and this is how it goes." (Billy Talent)
Posted by Secret Agent Woman at 11:46 AM 40 comments: