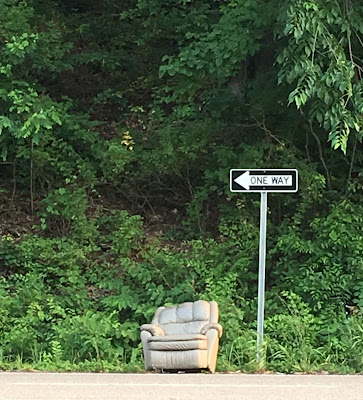 So a funny thing about invasive breast cancer - there is, at this time, no actual cure. Instead, there is the designation NED - No Evidence of Disease. Sort of like "You're in remission as far as we know." In my case, chemotherapy was indicated because the biology of my tumor showed it to be very aggressive. "A wolf in sheep's clothing," as my breast surgeon put it. There was no sign of cancer in my sentinel lymph nodes, but there was no way of knowing if cells had slipped out in my bloodstream. The chemo was for those cells. And maybe it worked, maybe it didn't, we just don't know. Still, all the cancer we definitely knew to exist was removed in my mastectomy, a year ago today. 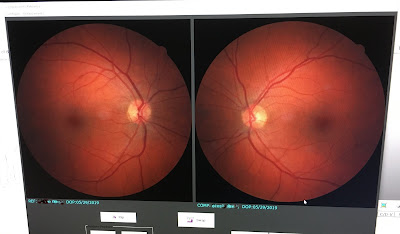 And now I take my tamoxifen, try to eat a healthy diet and minimize exposure to carcinogens, and wait. The most common sites for breast cancer to metastasize are to the bones, lungs, liver and brain. The other day, I went to see my new optometrist to get an eye exam and make sure I had no lasting damage from the chemo. I still have perfect distant vision and very mild presbyopia for my age. He took this cool photo of my eyes and walked me through all the positives: no macular degeneration, no glaucoma, no cataracts, no chemo-induced retinopathy, no ocular metastasis. Hold up, no what? He told me that metastasis to the eye was most common in breast and lung cancer. Eyeball mets! I didn't even know that was a possibility. I'll just add that to the nightmare rotation.

Eye exams notwithstanding, there aren't regular tests or scans to see if the surgeries or chemo or any other treatments worked. You just wait for symptoms of metastasis. It's kind of like getting your house treated for termites and then after that, the exterminator just parks, looks at your house from the street, and says, "Nope, don't see any termites from here so we're going to call that 'termite-free.' But call if your house starts to fall down!" 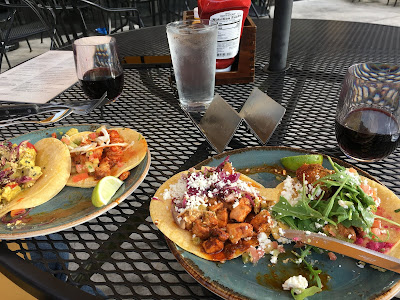 My husband and I spent some time last night remembering the day of the mastectomy and the difficult period following. I was frankly terrified of the surgery. It seemed so primitive. Barbaric, even. And such a long recovery for both of us to deal with. And yet, we got through it. So tonight, rather than focusing on the losses and scary uncertainty of what might lie ahead, we went out to celebrate me being a year NED. We got four kinds of tacos - fried avocado and salmon tacos for me and curried tofu and blackened flounder for him. 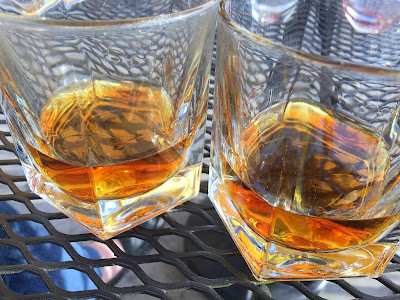 And then, because I noticed they had one of my very favorite bourbons for a ridiculously good price, we had the Weller Special Reserve and toasted our health in every language we knew, including à votre santé, sláinte mhaith, skál! For however long we have, to our health and to life.
"I didn't battle cancer,
Yeah, you know it battled me.
But it did not win,
I'm still standing, don't you see?"

Posted by Secret Agent Woman at 8:40 PM No comments:

On the Bourbon Trail. 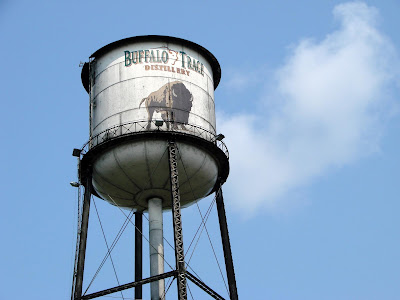 This past weekend, we made a quick trip up to Kentucky for the weekend. Saturday morning included a tour of the Buffalo Trace Distillery. I love touring wineries and breweries, too, but distilleries win hands down for the smell. It's heavenly. 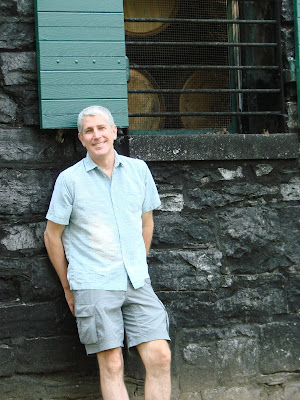 We just missed the cut-off for the 9 am tour, and were shunted into the 9:15 group. This gave us a little time to wander around on our own, looking at some of the stone and brick warehouses (you can see the barrels of whiskey stacked up through the window). 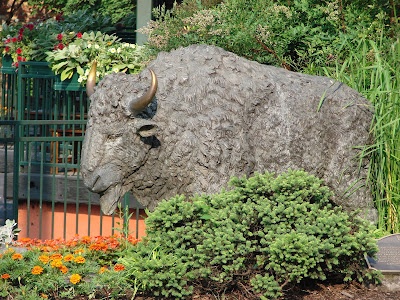 It turned out to be a good thing we were in that group - there were only 10 of us, compared to the much larger 9:00 and 9:30 groups of a couple dozen. This distillery occupies land that used to have a river crossing for the herds of buffalo in the area. Whiskey began being distilled on that site in 1775, and the distillery inteslf was built in 1812. It's been in continuous operation since, even through Prohibition. At that time, when other distilleries were shut down, it was allowed to produce whiskey for medicinal purposes, requiring a doctor's prescription. 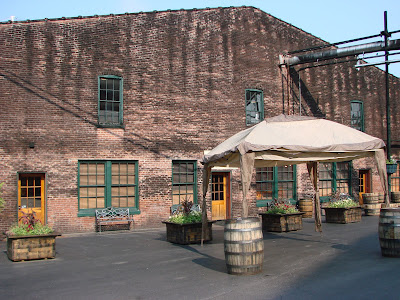 In the 1886, a steam heating system was added to regulate the temperatures in the warehouses. See the wooden flower pots? They have ornamental corn that I've never seen before. 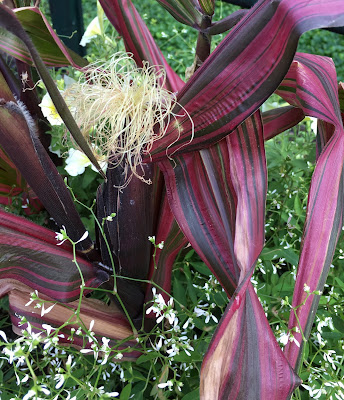 Complete with tiny ears of corn and variegated purple leaves. I'd love to have that planted in my garden. 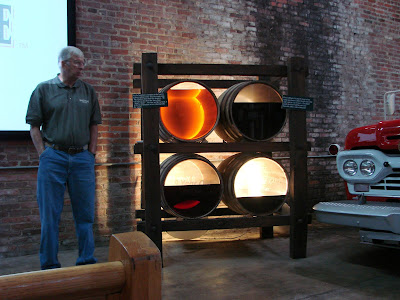 We watched a video about the history of the distillery and our guide answered questions. This display shows how bourbon evaporates as it ages, with the oldest bourbons being reduced to just a small bit. The part that is lost is called the angel's share. (Incidentally, one of my very favorite bourbons is Angel's Envy.) 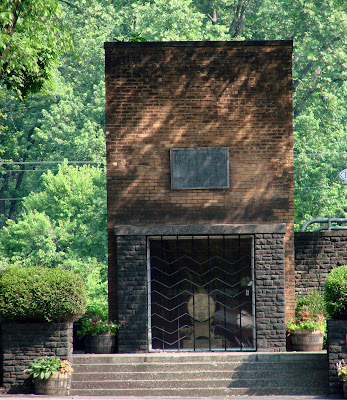 Warehouse V, a single barrel warehouse, was originally built to store their two millionth barrel of whiskey. It now houses, I believe, their 7 millionth. 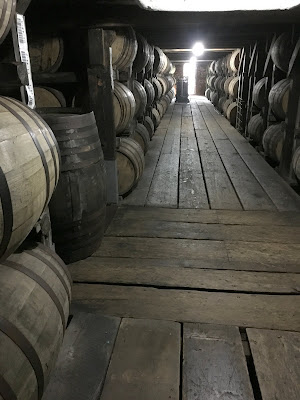 We toured inside one of the warehouses. Did I mention how heavenly the whole place smelled? 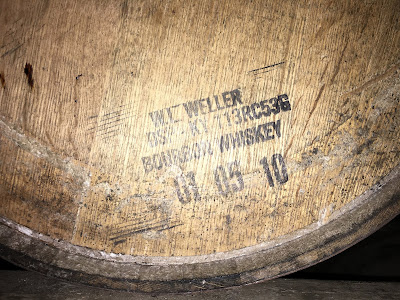 Wellers are another favorite of mine, also a wheated bourbon. We have bottles at home of both the Old Weller Antique 107 and the W. L. Weller Special Reserve, but have yet to track down a bottle of the W.L. Weller 12-year. Some day! I did, however, have a couple of glasses of it at the family gathering after my father's funeral. It was as good as I'd imagined. 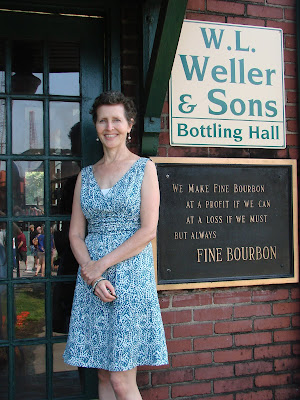 Wellers are one of the brands of bourbons bottled by hand at this distillery. I like their slogan "We make fine bourbon at a profit if we can, at a loss if we must, but always fine bourbon." 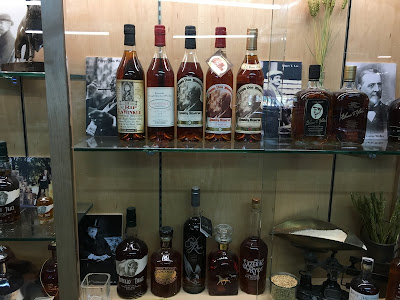 We toured the hand-bottling building, which isn't in operation on weekends. They have a display case a variety of their bourbons. That top shelf has some rare bourbons included. 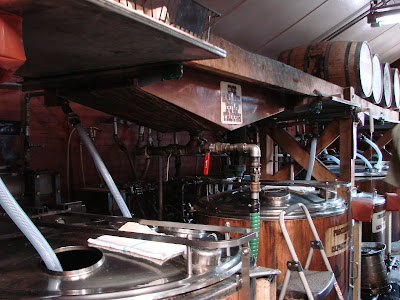 The barrels are uncorked and rolled to empty into this trough. Our guide scooped out a handful of char from the inside of the barrel for us to smell. I wished I could take a bag of it home to keep out in a bowl. 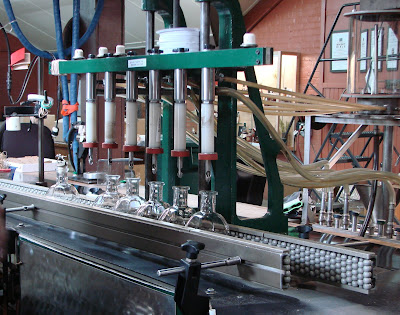 The guide demonstrated how bottles of Blanton's single-barrel are filled and then capped with one of a series of distinctive metal racehorses. Each is marked with one of the letters in Blanton's, and some collectors try to amass all the letters. Which seems a little nutty to me. It's another bourbon that can be really difficult to find in stores, so when we saw one a year or so ago, we nabbed it. 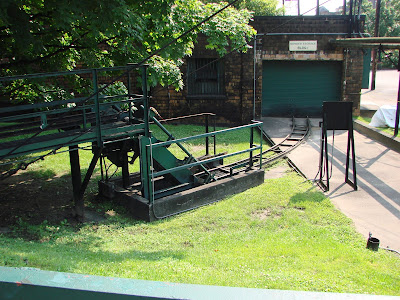 The barrels get transported through a series of sloping tracks, so gravity can do the work of moving them along. 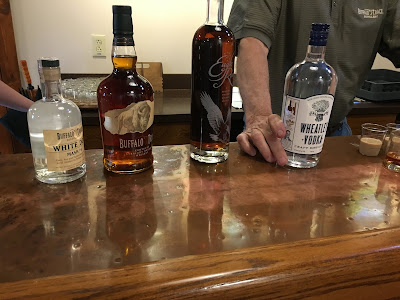 And then the tasting. Sadly, none of my favorites were on offer. Not the Wellers and certainly not anything from the Van Winkle family (made from the same mash bill as the wheated Wellers, using wheat with the corn and barley instead of the standard rye). And there was most definitely no sign of the absurdly elusive Pappy Van Winkle. It's the holy grail for whiskey drinkers and is sold by lottery each year. 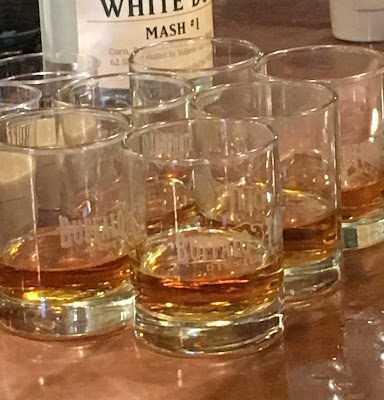 Instead we tasted their vodka (I'm not really a vodka drinker except for an occasional vodka tonic), and the White Dog Mash, the unaged spirits that go into making their bourbons and rye. I don't know why anyone would drink the stuff - it tastes a lot like moonshine. And then tastes of Buffalo Trace and Eagle Rare, which are just okay in my book. And some bourbon cream. And of course, chocolate covered bourbon balls, which I could eat until I died. 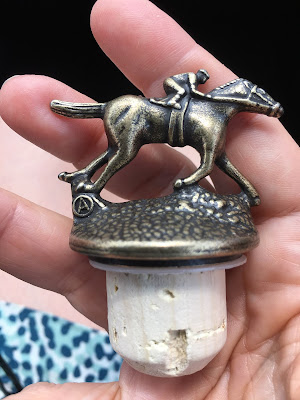 Our guide was a curmudgeonly sort who picked on one poor guy in our group. Until, that is, he turned his attention to me. I think he felt badly about it afterwards, though, because he gave me one of the Blanton bottle toppers to make up for it. I showed it to the guy he'd originally tormented and he called me the teacher's pet. 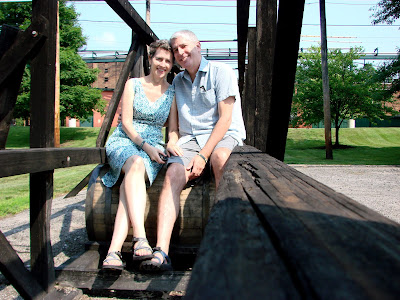 Eventually we'll probably visit all the distilleries on Kentucky's bourbon trail. It's a very pleasant way to spend a couple of hours on a beautiful morning.
Posted by Secret Agent Woman at 8:08 AM No comments: